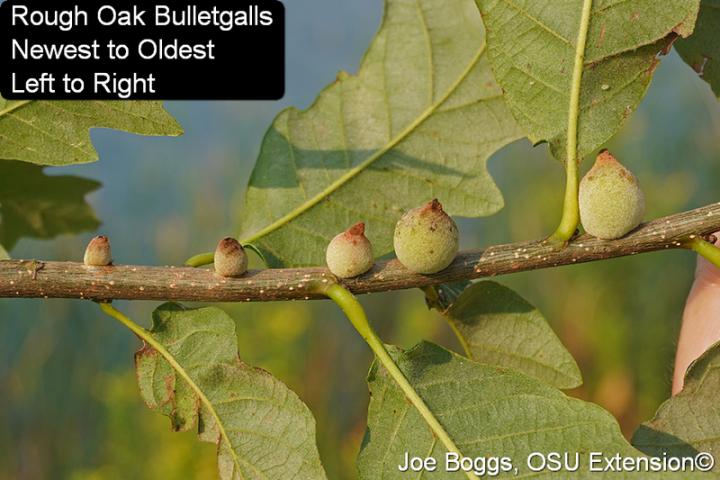 The common and scientific names for these galls are descriptive.  Round oak bulletgalls are usually almost perfectly round with a smooth surface making them look like musket balls. The specific epithet, quercusglobulus, references the oak host, Quercus, and globulus refers to the shape and is derived from the Latin “globus” which means sphere, or globe. 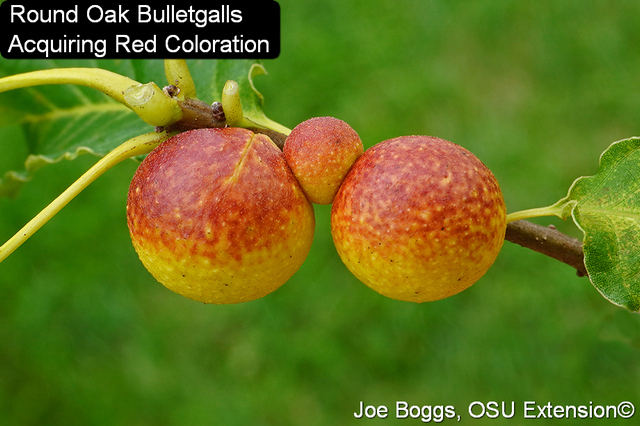 The surface of rough oak galls is covered in tiny hairs giving the galls a roughened appearance.  They can be round like a musket ball or slightly elongated like a Minie ball.  The “mamma” in the specific epithet quercusmamma is taken from the Latin for “breast.” 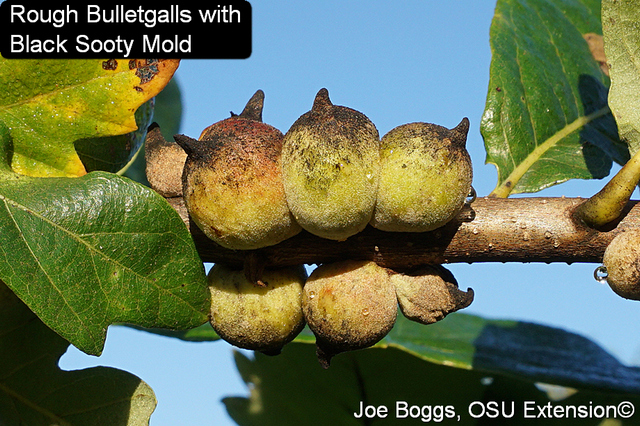 Both of these bulletgalls are found on oaks in the white oak group.  I most commonly find rough bulletgalls on bur (Quercus macrocarpa) and swamp white oak (Q. bicolor).  The literature notes that overcup oak (Q. lyrate) is also affected.  Much less seems to be known about the host range of the round oak bulletgall gall wasp but I find them on chinkapin (Q. muehlenbergii) and white oak (Q. alba).

Although the life cycles have not been established for all cynipid wasps, those that have been studied reveal a significant feature shared by most members of this gall-making family.  Cynipid wasps commonly have a complicated life cycle involving two different types of galls, usually arising from different parts of their host plants, that give rise to asexual (no males) and sexual (males and females) wasps at different times of the year.

The alternation of two different reproductive modes and lifestyles between generations of a species is known as heterogony.  Cynipid wasps aren't the only insects with heterogonic life cycles.  Aphids are arguably the most notorious for employing this sometimes complex system of development presumably to confuse entomologists.

The life cycle for the cynipid wasp, D. quercusmamma, that produces the rough bulletgalls was published in a paper in 2014.  It involves the production of the stem galls responsible for the “bullet” name and much less apparent bud galls.  Currently, the stem galls look more like fins as they are breaking through the surface of the stems rather than “bullets.” The stem galls will give rise to self-fertile females around the end of September to early October.  This is the asexual generation; there are no males.  Reproduction without females needing to mate with males is called parthenogenesis. 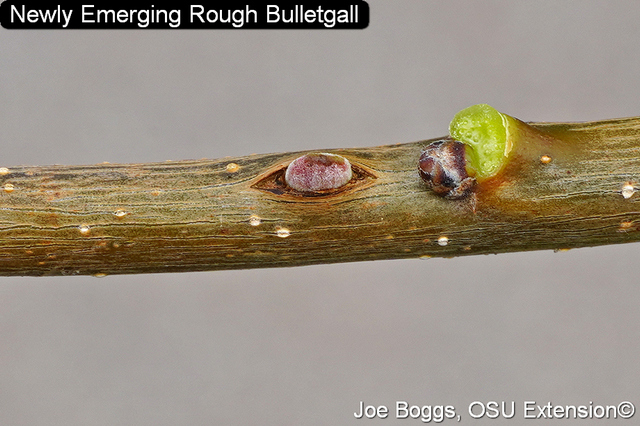 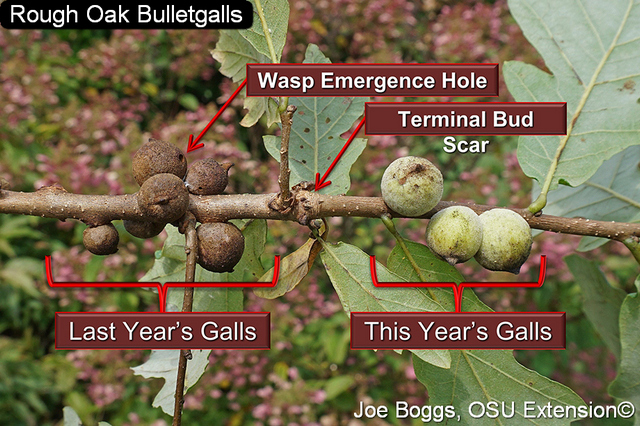 The parthenogenetic females that emerge from the bulletgalls crawl to a dormant leaf bud where they lay a single egg per bud in undifferentiated (meristematic) tissue.  The eggs hatch in the spring and chemicals exuded by the wasp larvae stimulate the tree to produce small, inconspicuous leaf bud galls.  The bud galls give rise to the sexual generation.  Both male and female wasps develop inside the ephemeral bud galls and adults emerge later in the season.

The mated females that arise from the leaf galls fly or crawl to the most recent twigs where they insert their eggs through the phloem to be in contact with the meristematic cambium.  The thin cambial layer is located between the xylem and the phloem.  The wasp requires the services of meristematic cells to grow their bulletgalls. 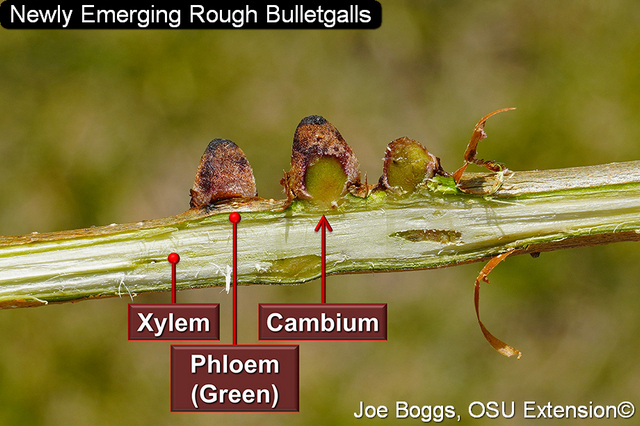 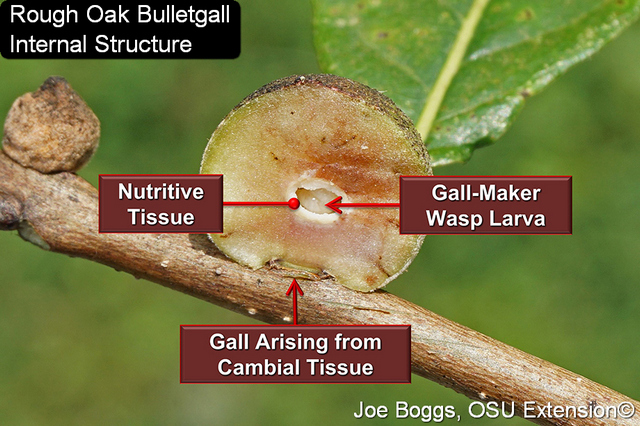 As with the vast majority of stem galls on oaks, both the rough bulletgalls and round bulletgalls cause no appreciable harm to the overall health of their oak hosts.  They may affect the tree’s aesthetics; however, the galls do not penetrate deep into the xylem (wood) to interrupt the vascular flow of water and nutrients to stems and leaves.  This is an important point relative to impact.  The so-called Horned Oak Galls produced under the direction of the cynipid wasp, Callirhytis comigera, is one of the few oak stem galls that can disrupt vascular xylem flow causing stem dieback. 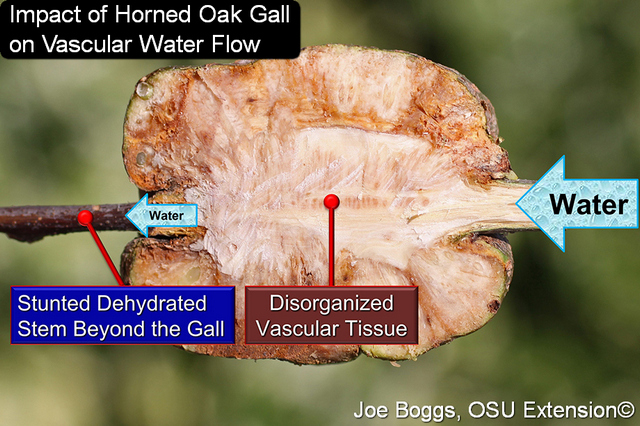 The life cycle of D. quercusglobulus which directs the development of round bullet galls has not been studied.  Thus, it remains unknown whether or not the wasp has a heterogonic life cycle.  Based on personal observations, it appears stem galls share development and structure with rough oak bulletgalls. 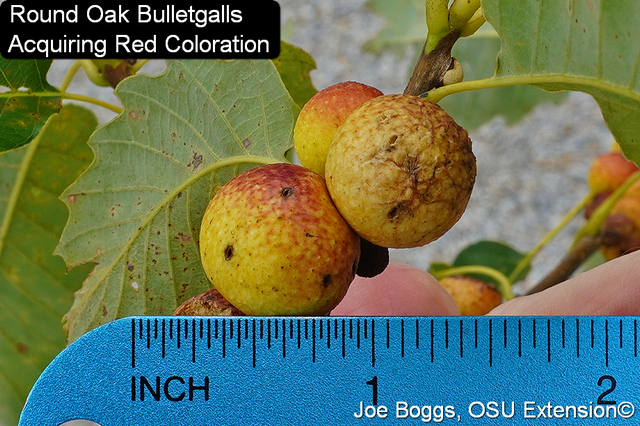 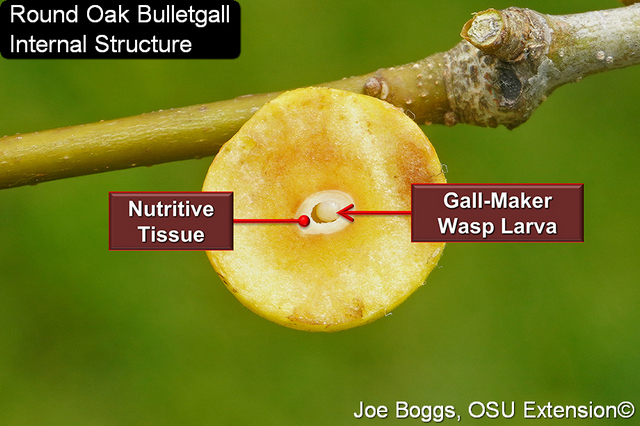 However, the overall timing and progression of stem gall development may not be the same as with rough bulletgalls.  Rough bulletgalls are just now emerging whereas I photographed round bulletgalls emerging and expanding on the stems of two chinkapin oaks in southwest Ohio on July 11.  Indeed, when I revisited the two trees yesterday, I found that the vast majority of the round bulletgalls had fully “mature” with the wasp larvae appearing to be in a late instar stage. 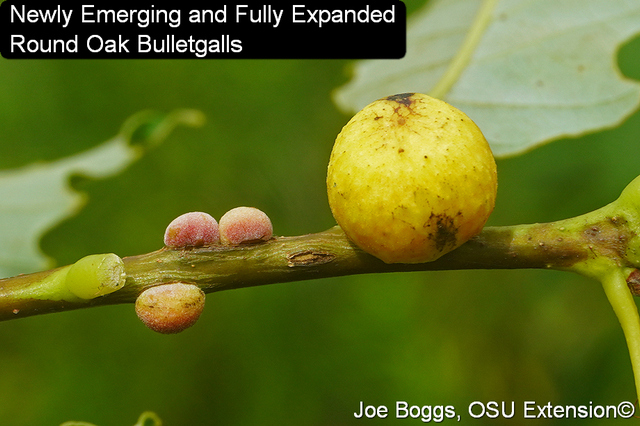 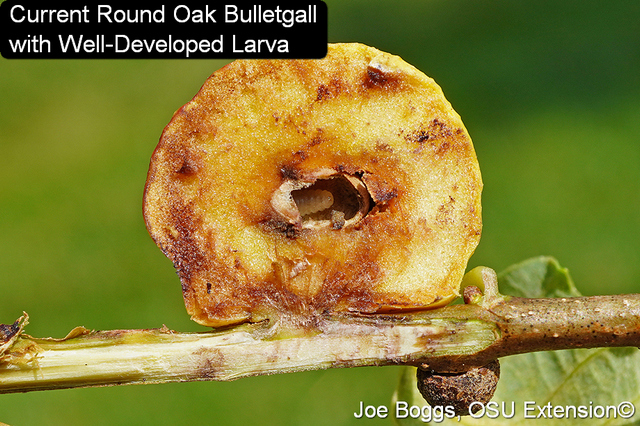 One of the most fascinating features of many plant galls, including rough oak bulletgalls, is the inclusion of extrafloral nectaries (a plant organ) in the gall structure.  The nectar oozes across the surface of the galls and can become colonized by black sooty molds.  Nectar flow begins almost as soon as the galls emerge from the stems and continue until the gall-making larvae complete their development. 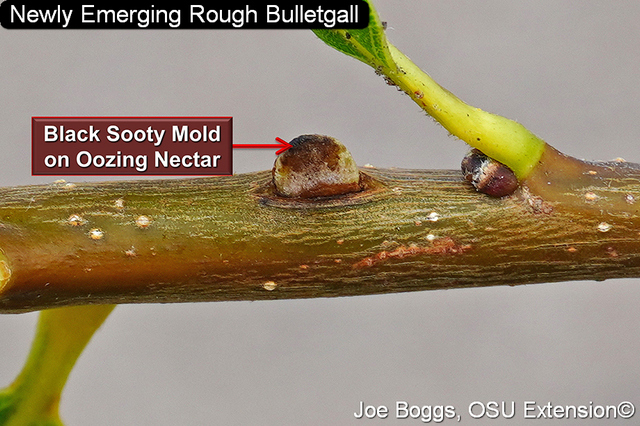 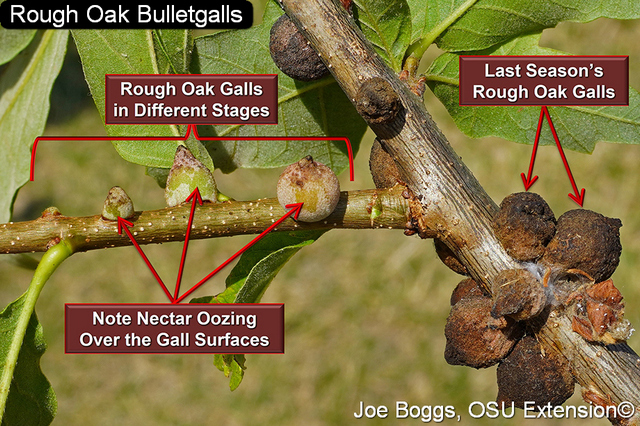 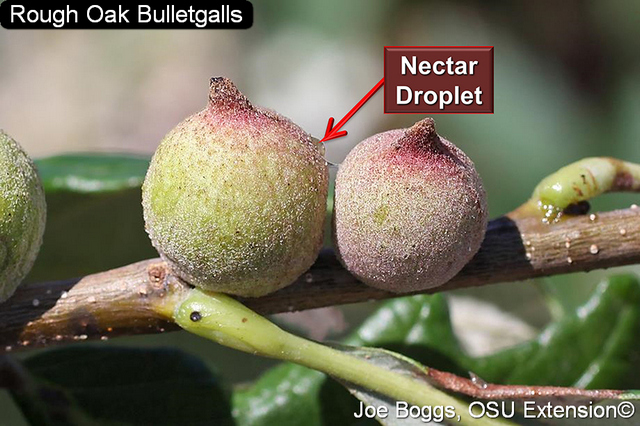 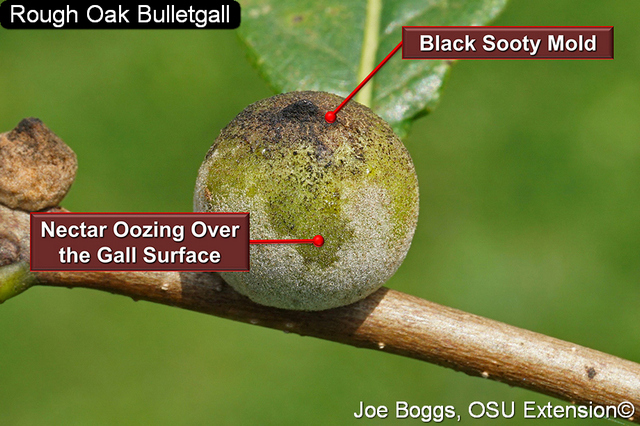 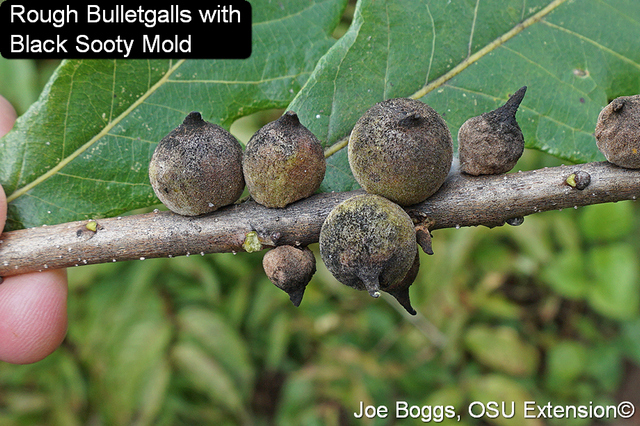 Rough oak bulletgalls that are currently rising from oak stems in Ohio are already attracting an entourage of bodyguards.  The nectar exuded from the extrafloral nectaries attracts a variety of stinging insects including baldfaced hornets (Dolichovespula maculata), paper wasps (Polistes spp.), and yellowjackets (Vespula spp.) as well as biting insects such as carpenter ants (Camponotus spp.). 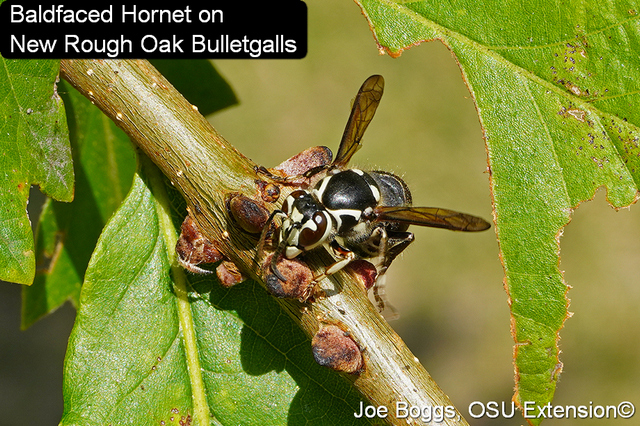 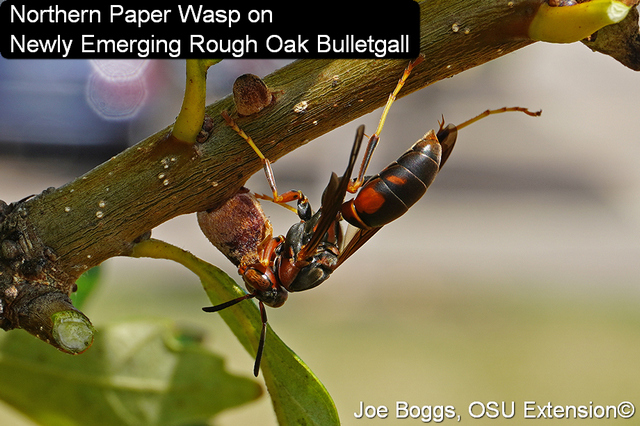 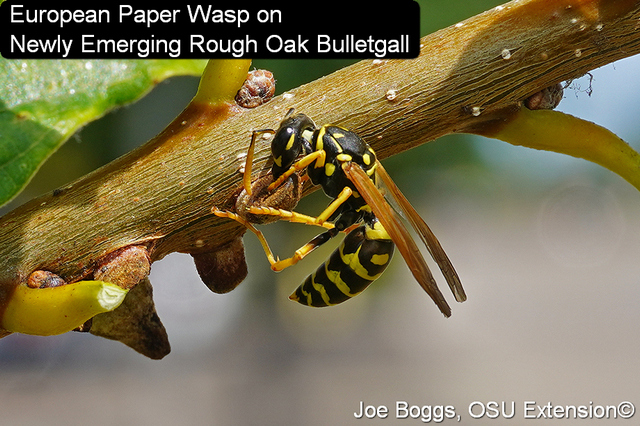 This is particularly true of yellowjackets and baldfaced hornets in late summer to early fall when they switch from high-protein diets to high-carbohydrate diets.  They become a nuisance as they compete with our own high-carb consumption in the form of soda, donuts, and certain adult beverages.

The wasp's high-carb hankering draws them to the nectar (a.k.a. wasp candy) oozing from the extrafloral nectaries incorporated in the rough oak bulletgall structure.  Of course, ants sporting powerful biting mandibles will also show up at the sugar party along with flies. 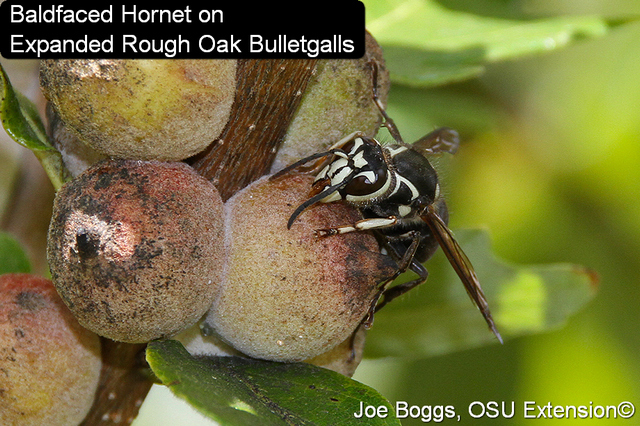 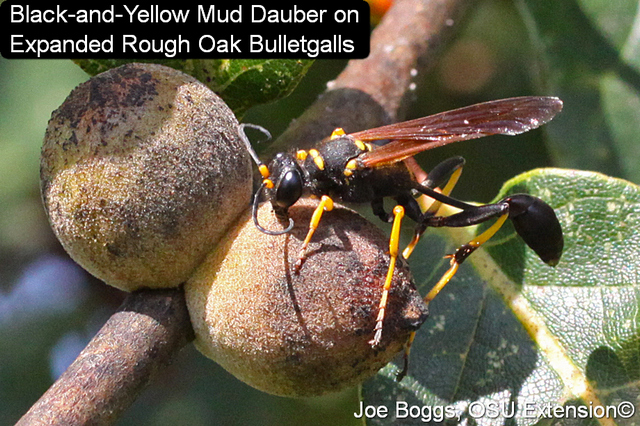 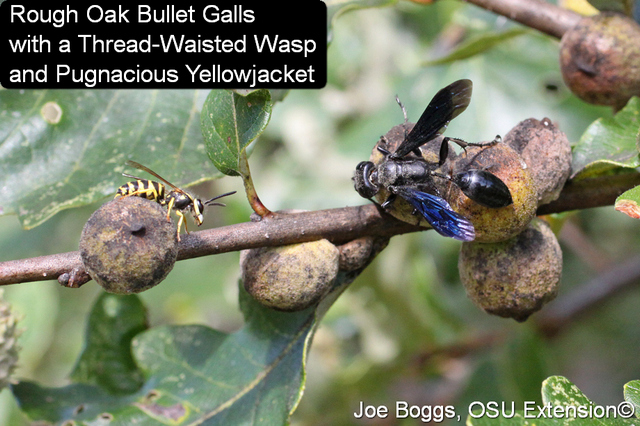 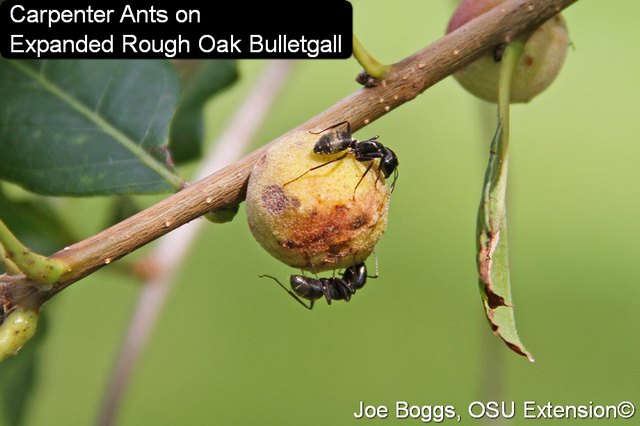 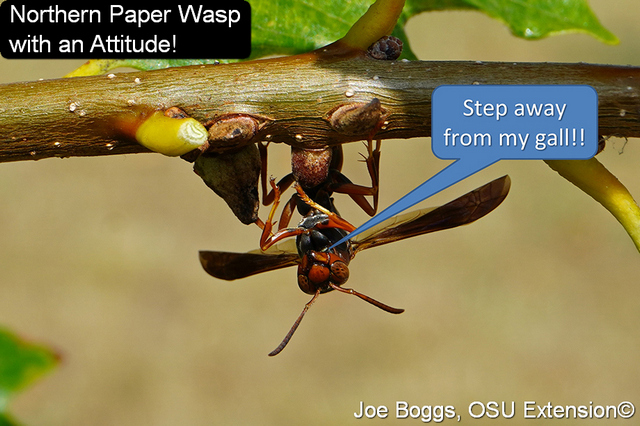 Trees that are heavily ladened with rough oak bullet galls may literally buzz with wasp activity.  The scene can be intimidating to uninformed homeowners and landscape managers.  However, the wasps are too busy acquiring a sugar high to spend time chasing people.  They are most aggressive when defending their nests.

Paying for the Lack of Protection

Based on personal observations, I’ve concluded that round bullet galls may not have extrafloral nectaries.  I’ve never seen nectar oozing from the galls nor black sooty molds causing the galls to acquire a dusky patina. 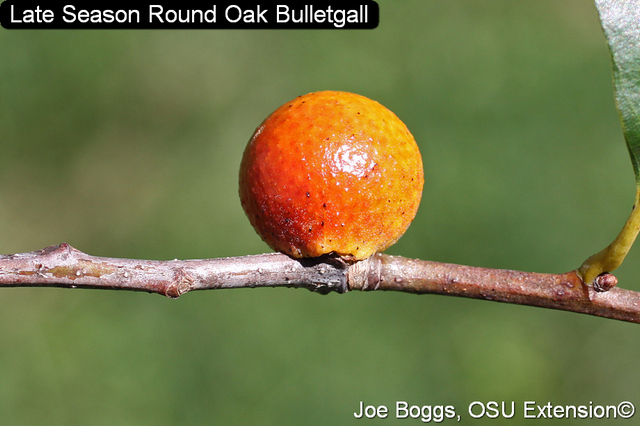 Indeed, I did not observe a protection detail in the form of wasps or ants while photographing the galls illustrating this Alert.  However, I did observe what happens when there’s no buzzing entourage of bodyguards.

My second visit yesterday to the chinkapin oaks revealed heavy predation presumably by birds.  Although the literature notes that several species of birds will partake in a gall-wasp larva meat meal including chickadees, titmice, and tits (family Paridae), I suspect the primary culprit responsible for the working over the galls was the downy woodpecker (Dryobates pubescens, family Picidae). 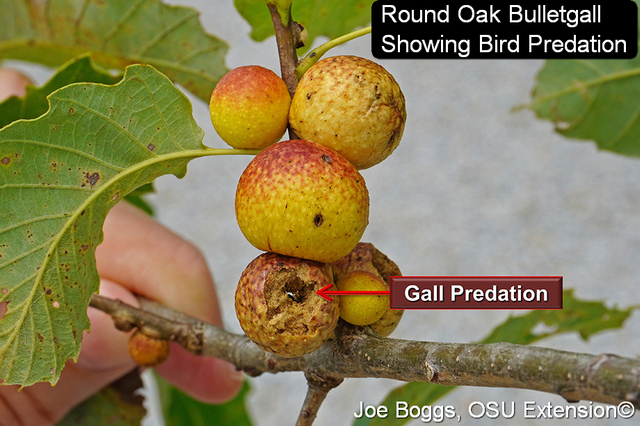 A paper published in 2020 examined the interaction between the cynipid wasp, Callirhytis quercusbatatoides, and its southern live oak (Q. virginiana) host.  The wasp directs the development of multichambered woody stem galls.  The authors wrote, “… galls are commonly attacked by insectivorous birds, most commonly by the downy woodpecker (Dryobates pubescens), which is native and common in the study region. On multiple occasions, all four authors on this study have independently observed D. pubescens predating C. quercusbatatoides galls at our field sites.”

I did a quick-and-dirty evaluation of the impact of the destructive predation on the round bulletgalls gracing one of the chinkapins which is around 20’ tall.  I examined 50 randomly selected galls within my reach augmented by 28” loppers and found 36 (72%) had been skewered by a bird beak.  Of course, I could not sample throughout the canopy of the tree and the massacre may not be over given that the galls still offer gall-maker meat meals.  Regardless, my distinctly unscientific observation illustrated the potential impact predators can have on a gall-maker that fails to pay for protection. 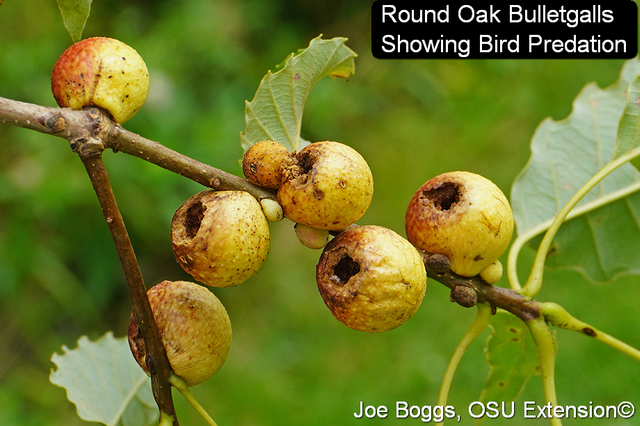 Conversely, I’ve been observing and photographing rough bulletgalls for many years and do not have a picture of a gall that’s been pecked by a bird.  Of course, that doesn’t necessarily mean anything; it’s even less scientific compared to my round bulletgall observation.  Still, unless the predation occurs at night under the cloak of darkness, I can’t imagine a bird brave enough to run the stinging gauntlet for a morsel of gall-maker meat.

McEwen, C., S. Digweed, J.A. Nicholls, and W. Cranshaw. 2014. Description and biology of the sexual generation of Disholcaspis quercusmamma (Walsh and Riley)(Hymenoptera: Cynipidae), with notes on associated parasitoids. Proceedings of the Entomological Society of Washington, 116(3), pp.294-310.