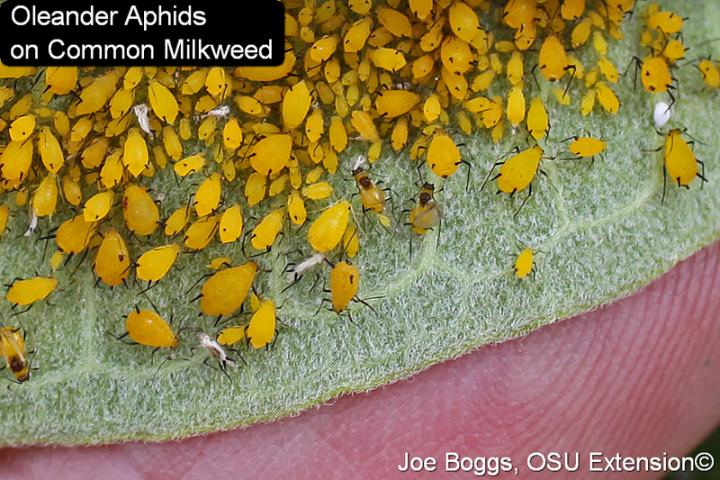 Devotees of Monarchs (Danaus plexippus) commonly view Oleander Aphids (Aphis nerii) with disdain.  After all, this is the time of the season when we see hordes of the non-native yellow aphids on milkweed (Asclepias spp.) plants "reserved" for monarch butterfly caterpillars.   Of course, Mother Nature takes no reservations, even for royalty. 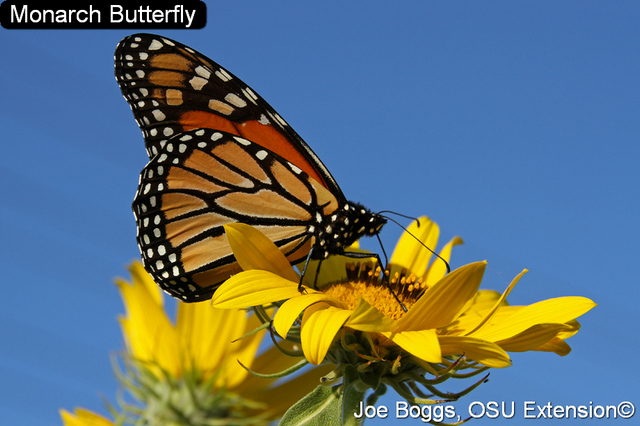 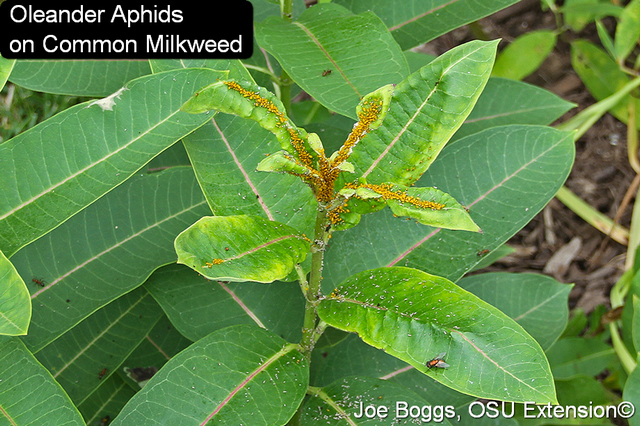 Oleander aphids are parthenogenetic meaning there are no males; all are females.  This partially explains why this aphid can rapidly develop high population densities.  They also seem to be resistant to high summer temperatures which is unlike many other aphid species that are most prolific during the cool temperatures of spring and fall. 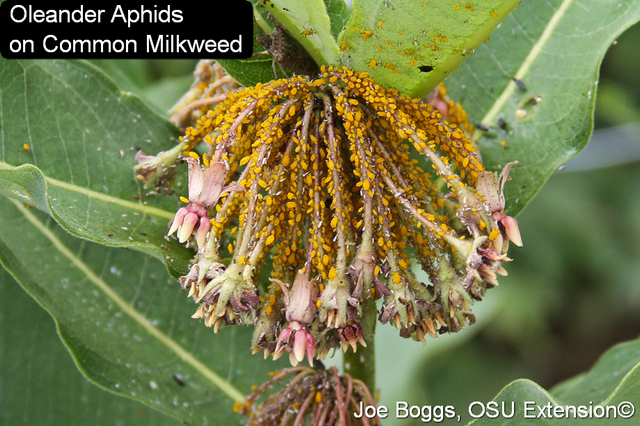 It’s understandable to think that anything that threatens milkweeds by extension threatens monarchs.  However, options to manage the oleander aphids are limited.  Many approaches such as insecticide applications would also topple the monarchy.

However, two studies cast doubt on the need to control the aphids.  Multicolored Asia lady beetle (MALB) (Harmonia axyridis) adults and larvae will eat early instar monarch caterpillars.  But a study published in 2005 showed that when given a choice, MALB has a density-dependent preference for eating oleander aphids.  When aphid populations are high, MALB eats aphids; when aphid populations are low, MALB eats the small caterpillars. 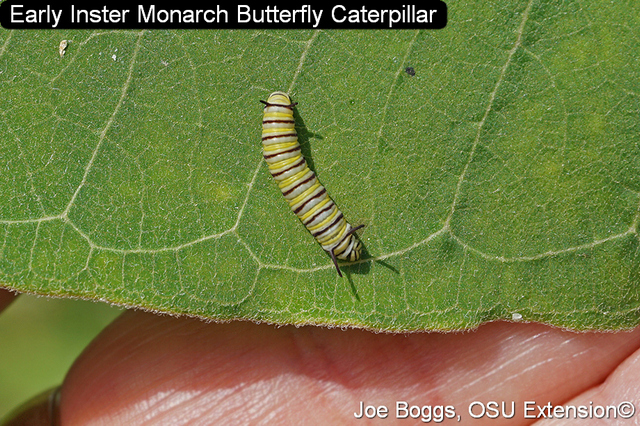 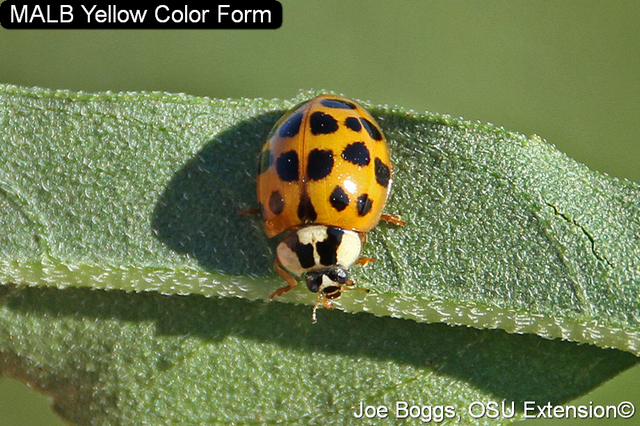 So, in a roundabout way, the oleander aphids protect monarch caterpillars from MALB predation.  I can envision the caterpillars saying to the aphids, “you fight them off while we go get help!”  There’s a cartoon in there someplace. 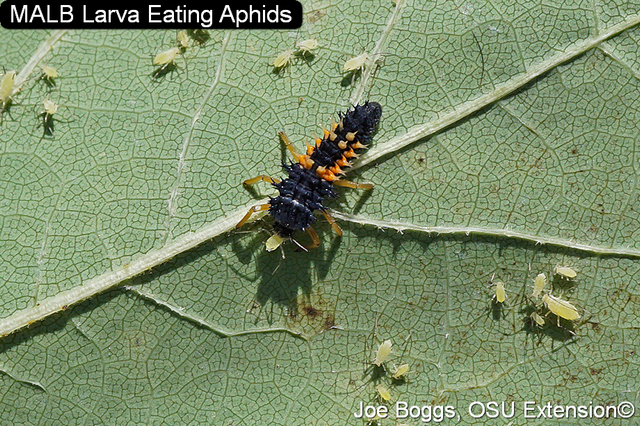 Indeed, even though oleander aphids are non-natives, they are still the target of a plethora of enemies.  The “3-Ps” (predators, parasitoids, and pathogens) can dramatically reduce aphid populations.

Aside from lady beetles, the predatory gauntlet run by the oleander aphids also includes lacewing (order Neuroptera) larvae.  The image below shows the characteristic lacewing eggs on stalks rising from the leaf surface of swamp milkweed (A. incarnata); an ill omen for the aphids infesting the plant. 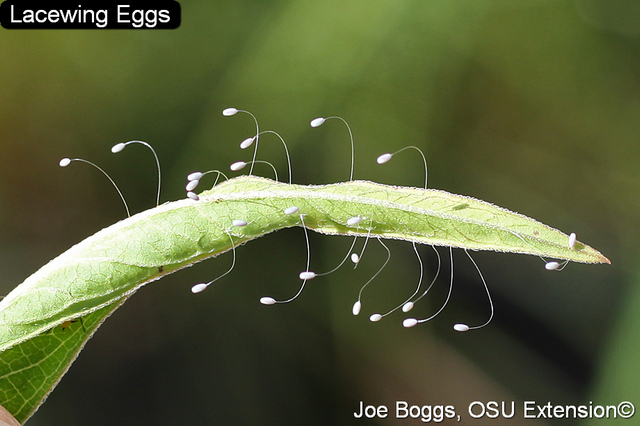 Lacewing larvae sport outsized sickle-shaped mandibles that they sink into aphids to remove the essence-of-aphid.  Unfortunately, they are indiscriminate killers and may occasionally remove the essence-of-monarch.  Of course, the lacewings may ignore a royal side dish if there are plenty of aphids as the main course. 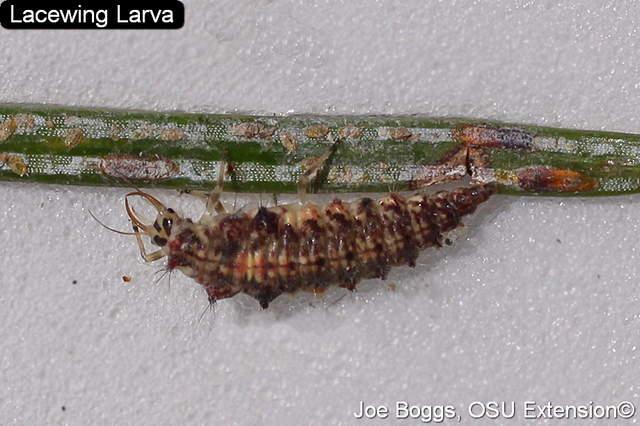 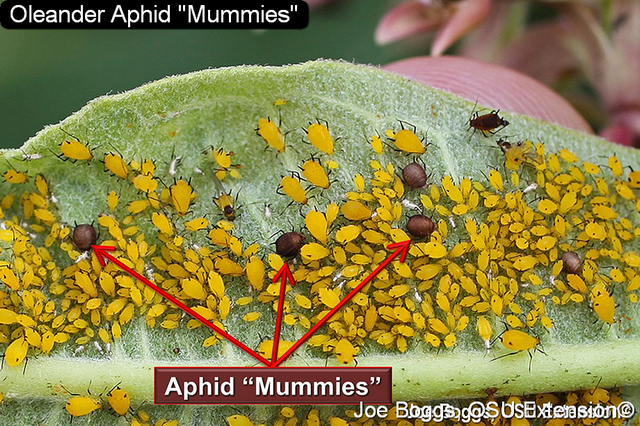 On the other hand, as with many aphids, ants commonly show up to “tend” the oleander aphids like miniature shepherds.  They protect their aphid-flock from threats in exchange for a sweet treat in the form of honeydew excreted by the aphids.  Thus, predators and parasitoids may have less of an impact on oleander aphids that are heavily guarded by ants. 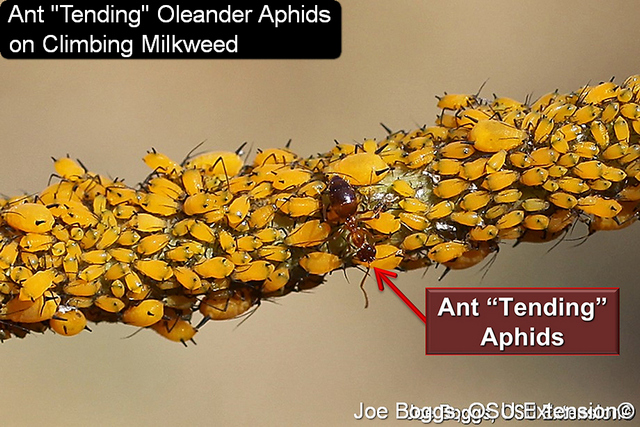 However, a study published in 2014 revealed that monarch partisans may want to keep the oleander aphids around for a purpose beyond hoping the aphids will sacrifice their bodies in the service of the monarchy.  The study showed monarch caterpillars indirectly benefit from the sap-sucking done by oleander aphids. 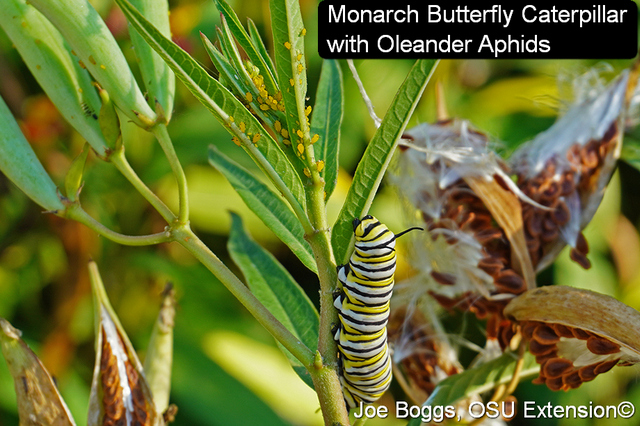 The study’s authors reported that “Danaus plexippus larvae feeding on plants together with A. nerii weighed 37.7% more compared to larvae on control plants without aphids.”  The authors further stated, “… the presence of aphids did not influence the amount of leaf damage caused by monarchs suggesting that monarch feeding behaviour was not impacted by the presence of aphids, and increased weight was not simply due to greater feeding.”

To understand this counter-intuitive result, it’s important to reexamine the common belief that milkweed toxins do not affect monarch caterpillars.  The impact of the aphids demonstrates that the caterpillars are tolerant of milkweed toxins, but not completely immune to their effects. 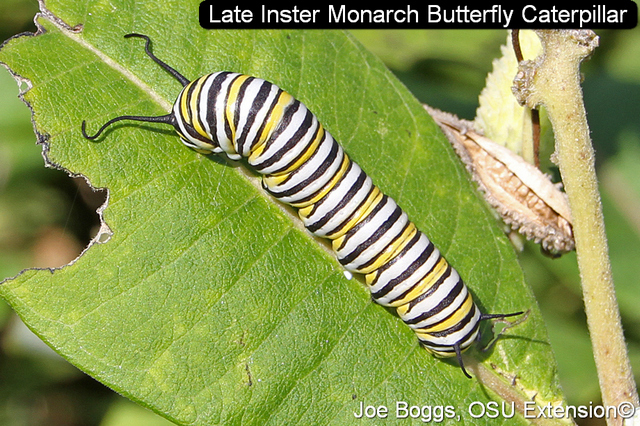 Of course, if the scientific data isn’t convincing, a high aphid population on milkweed stems and leaves can be significantly reduced by sending the aphids on the one-way water ride of doom by hitting them with a strong stream of water.  Typically, very few sopping aphids find their way back to the start of their watery ride. 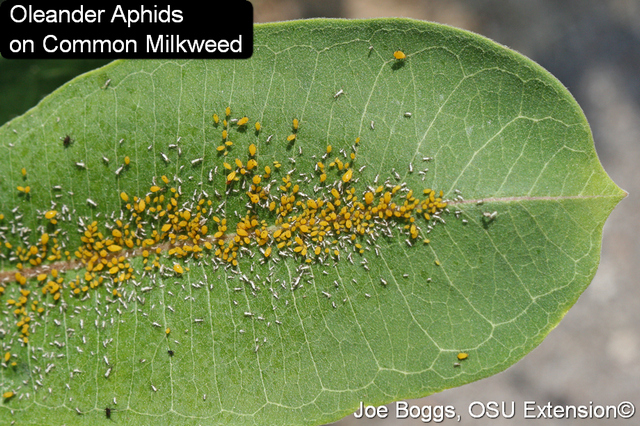 On a side note, it’s important to keep in mind that oleander aphids have a broad host range beyond the milkweeds generally grown for monarchs.  The aphids may appear on almost any member of the dogbane family (Apocynaceae) including plants belonging to the genera Cynanchum (climbing milkweed, C. laeve), Vinca, and of course Nerium (oleander) which is referenced by the aphid’s common name. 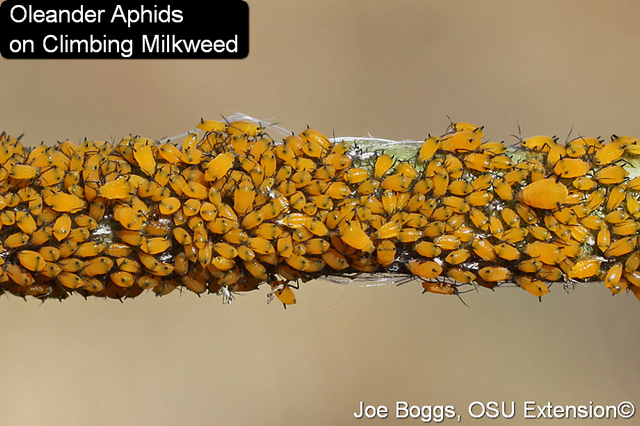 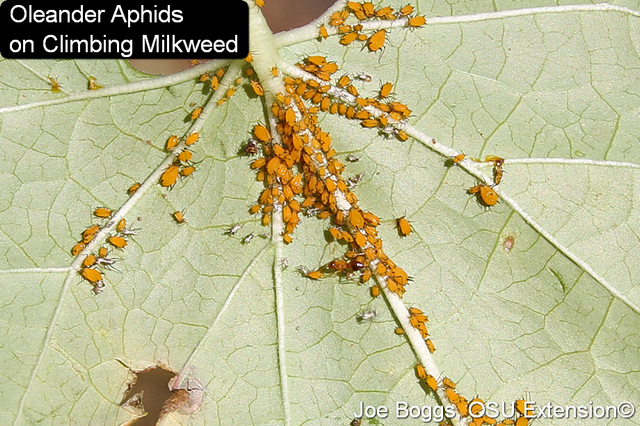 As I discovered last year, oleander aphids also love Mandevilla (Mandevilla spp.) and so does my wife.  I didn't know these vining plants also belong to the dogbane family until the aphids taught me. 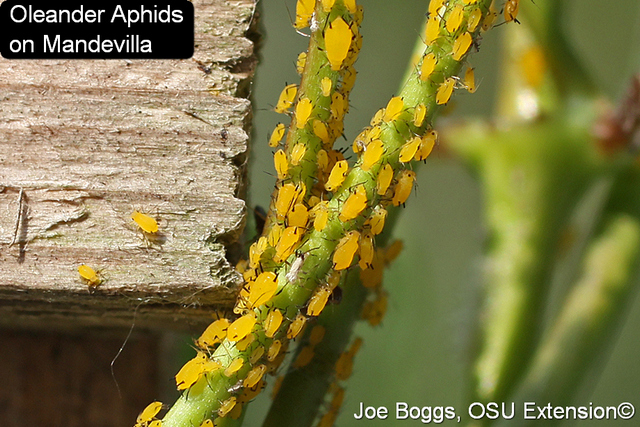 The deep green foliage and showy flowers of these tropical or subtropical vines provided a nice, trellised accent on our front porch.  So, when she told me one of "our" vines was under attack by hordes of sap-sucking aphids, I acted quickly … in the interest of domestic bliss.  A one-way ticket on the water ride of doom eliminated most of the oleander aphids.  Periodical revisits to the aphid water park kept the population low throughout the rest of the season. 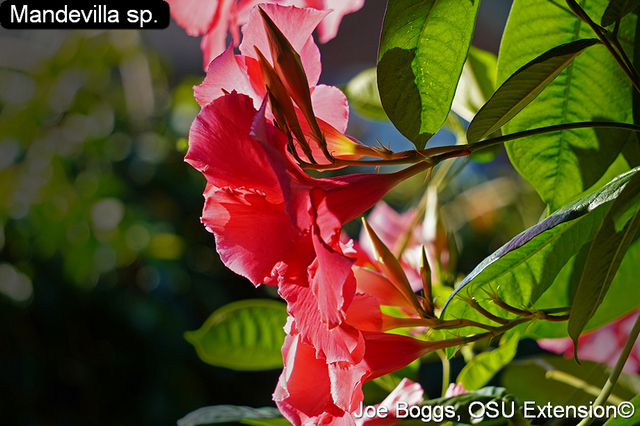