Be Alert to Grass Lace Bug 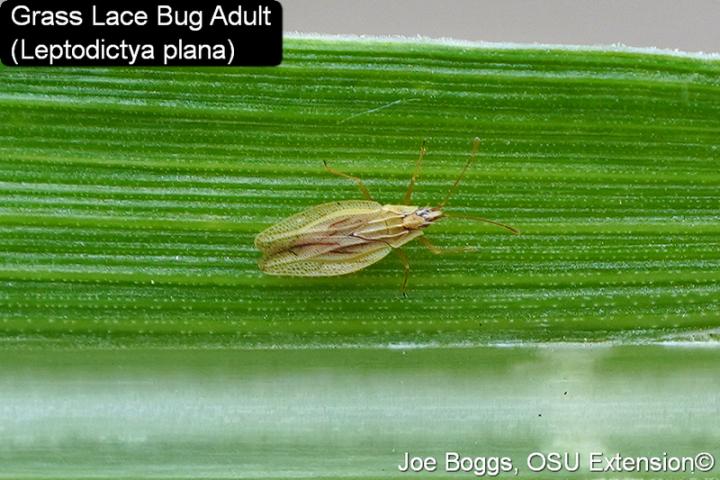 I was unaware of the existence of the Grass Lace Bug (Leptodictya plana, family Tingidae) until I found a damaging infestation late last week in southwest Ohio on ‘Little Bunny’ dwarf fountain grass (Pennisetum alopecuroides, family Poaceae). The normally dark green blades had a bleached-out appearance with some blades turning brown. 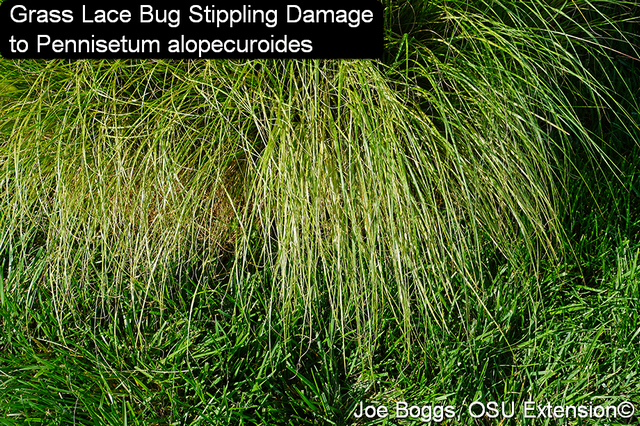 A close examination revealed the blades were covered with numerous tiny yellow spots; a symptom commonly called “stippling.”  The symptom is named for the art technique of repeatedly tapping the tip of a black pen on paper to produce drawings out of the numerous small dots.  Perhaps invented by artists who drank too much coffee. 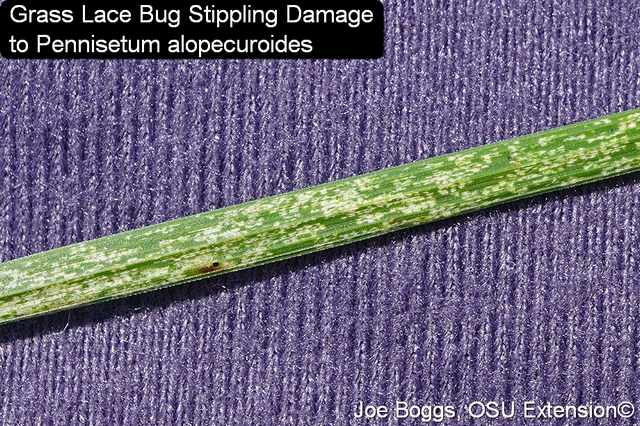 Of course, stippling is the calling card of lace bugs.  Grass lace bug adults and immatures (nymphs) live on the lower blade surface.  As with all lace bugs, the nymphs and adults use their piercing-sucking mouthparts to stab into the succulent grass blade mesophyll, sandwiched between the upper and lower epidermal layers, to rupture the cells and suck up the contents. 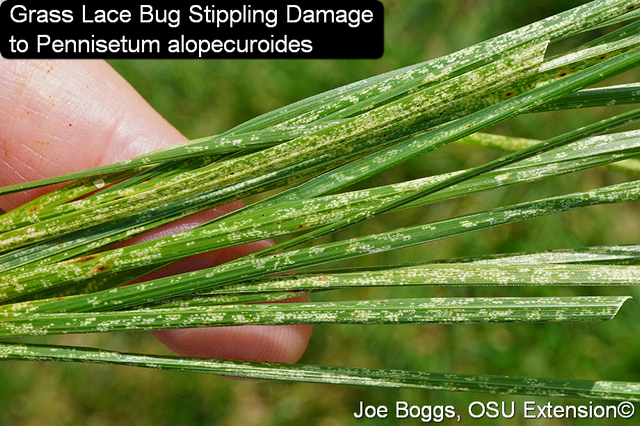 The damage produces stippling on the upper and lower blade surfaces which can coalesce to cause large areas of the blades to turn light brown.  High grass lace bug populations not only reduce the aesthetic value of their grass hosts, but the feeding damage also produces severe plant stress.  According to the literature, grass lace bugs can potentially kill plants, particularly recently established ornamental grass plants. 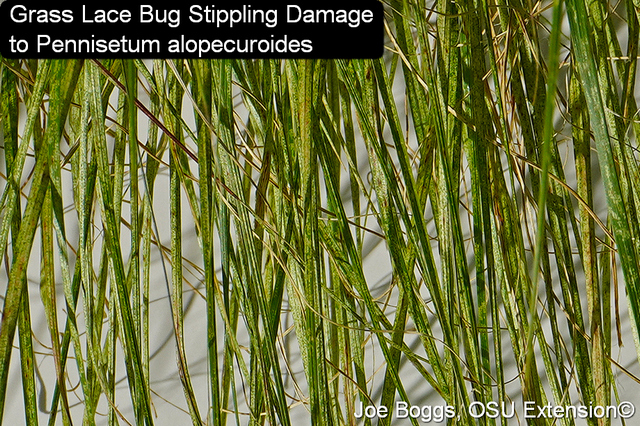 Grass lace bugs were first described in 1913 from a specimen collected in Oklahoma.  Since that time, the lace bugs have been confirmed in AL, AZ, GA, FL, KS, MS, NM, and TX.  I can find no reports of the lace bug previously being found in Ohio.

Grass lace bugs spend the winter as adults hiding in the duff beneath their host plants.  The tan-colored adults are extremely narrow and measure around 2/8” in length. 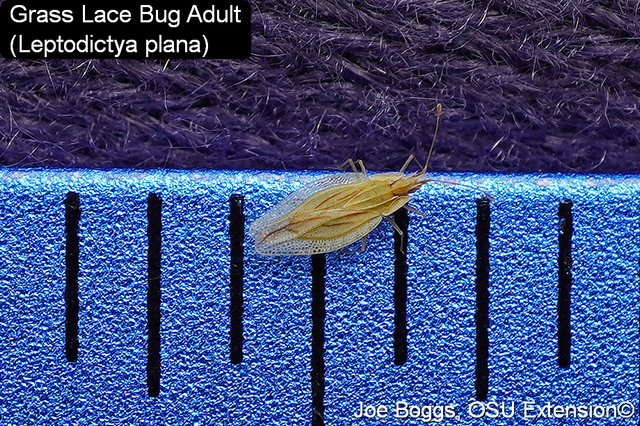 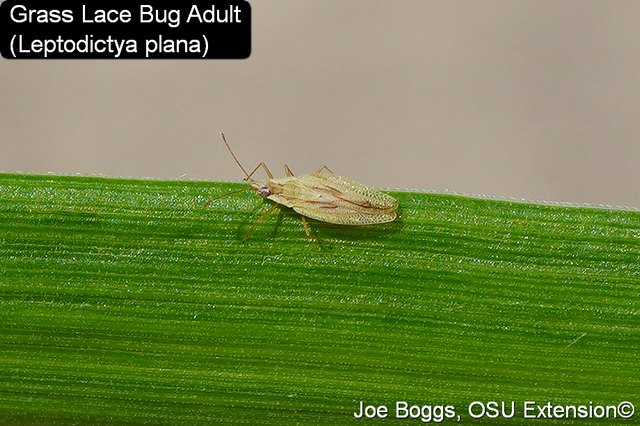 Of course, the immatures (nymphs) are even smaller.  As with other lace bugs, the flattened, oval-shaped nymphs are covered in spines jutting out in all directions from their bodies.  The nymphs develop through 5 stages (instars) and it’s common to find multi-aged nymphs cavorting in groups on the lower leaf surface. 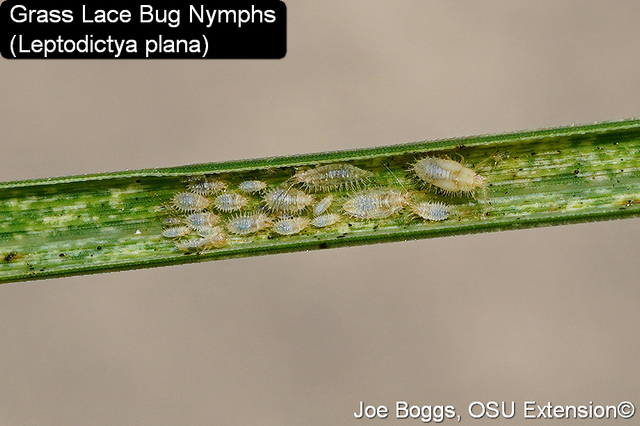 I noticed that the location of the adults and nymphs on the undersides of grass blades coupled with their small size and coloration made them difficult to detect.  Indeed, their light coloration allowed them to effectively blend with their stippling damage. 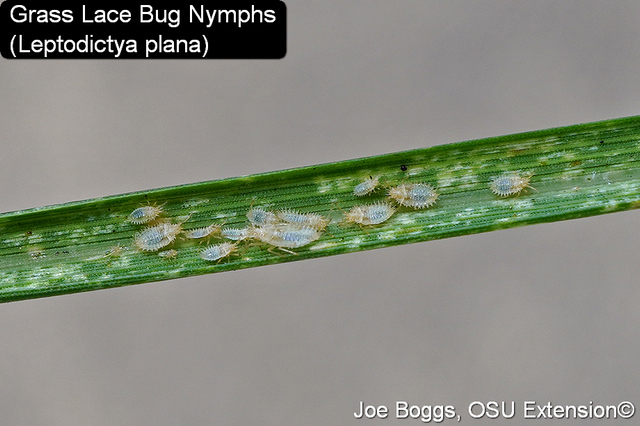 The most complete research on the life cycle of grass lace bugs was conducted in Georgia.  The life cycle in Ohio is not known.  The Georgia researchers reported observing 3 – 4 generations; however, they noted that adults were present throughout the growing season and constantly contributed eggs to the populations.  Thus, there was an extreme amount of overlap between generations making distinct generations difficult to discern.  However, they observed the highest overall population densities in early August which was also when they observed the highest temperatures during the study.

I only discovered the Ohio population last week.  Although heavy damage is already evident, I’m predicting the bugs will produce much more damage based on the number of early instar nymphs I found.

Despite its common name, grass lace bugs have a somewhat narrow host range focused on grasses used as landscape ornamentals rather than turfgrasses.  Research published in 2011 that was conducted at the University of Georgia tested 32 commercially available ornamental types of grass and sedges and 5 trial accessions of elephant grass (P. purpureum).  Plants were evaluated for grass lace bug feeding and oviposition preferences. 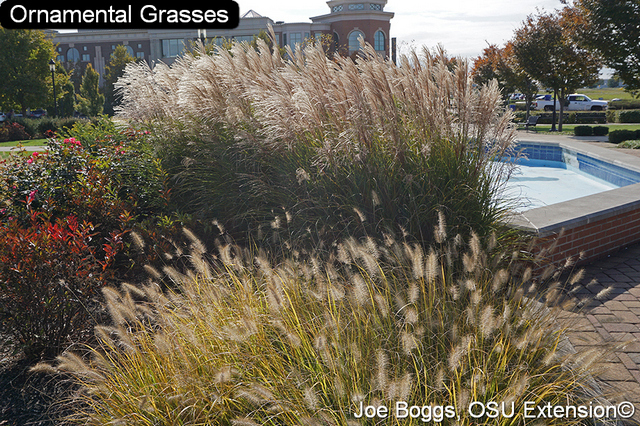 A broad cross-section of grasses belonging to the Poaceae family was represented in the preference trials including the following genera:  Calamagrostis, Andropogon, Cortaderia, Eragrostis, Festuca, Miscanthus, Nassella, Panicum, Pennisetum, Phalaris, Schizachyrium, Sorghastrum, and Spartina.  Some non-grasses were also tested including Acorus (family Araceae), Cordyline (family Laxmanniaceae) as well as the sedges (family Cyperaceae) Carex, and Scirpus.

Although all of the plants tested received some stippling damage, the non-grasses including the sedges showed the least damage.  However, the authors noted that it was evident that the grass lace bug preferred to feed on members of the Poaceae family.

On the other hand, all members of Poaceae were not equal.  The genera that were substantially damaged included Andropogon, Schizachyrium, Festuca, Spartina, and Sorghastrum.  However, plants belonging to the Pennisetum genus received the highest level of damage.  Equally important, Pennisetum spp. was the only genera that supported oviposition. 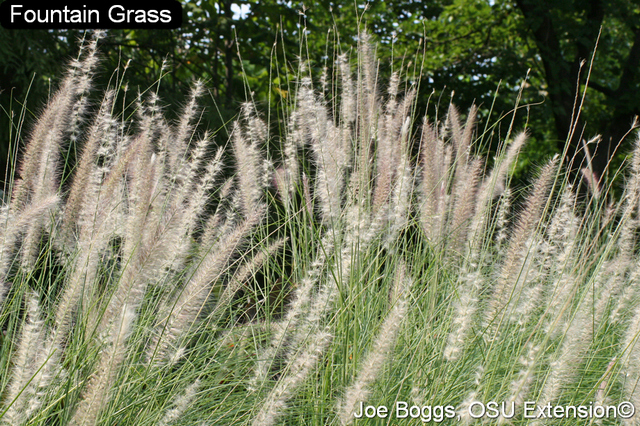 I’m not certain if my discovery represents a portent of things to come with grass lace bugs spreading from warmer climes to become a newly emerging pest in Ohio, or if the lace bugs have been with us all along but flying below our radar.  Regardless, nursery producers and landscape managers should be giving Pennisetum spp. a close look.  Grass lace bug symptoms may mimic moisture stress. 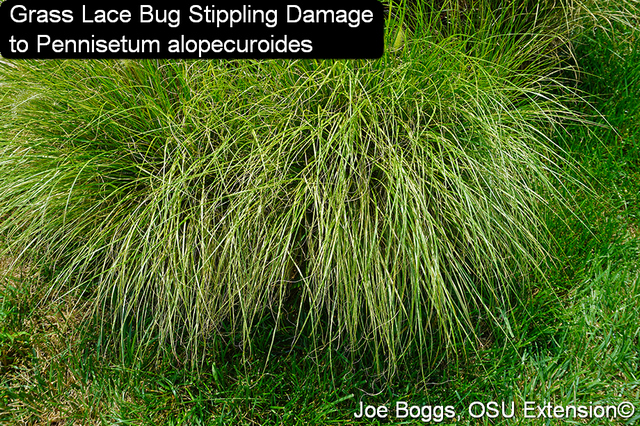 At this point, it’s hard to justify dropping Pennisetum spp. from our landscape design palette based on a single observation.  However, the host preference study highlighted significant differences within Poaceae.  It was conspicuously demonstrated to me with a planting of Miscanthus spp. remaining untouched but located only about 60’ from the heavily infested P. alopecuroides.  Indeed, while sharp-eyed readers may discern that my pictures of adult grass lace bugs were taken on Miscanthus blades, I only used the broad green blades to provide a better contrasting background compared to the narrow, stippled blades of the Pennisetum. 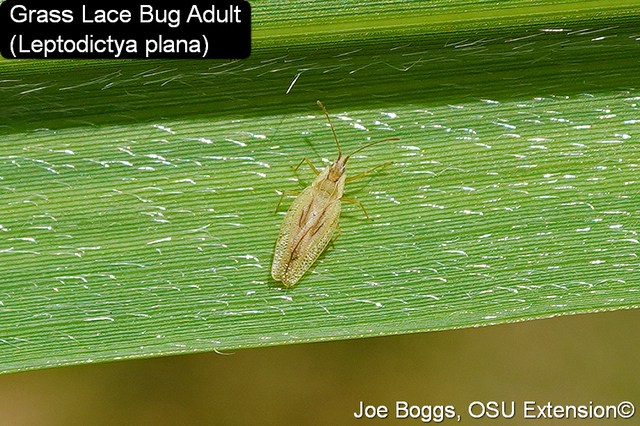 Although I could find no insecticide efficacy trials focused on grass lace bugs, presumably products used for other lace bugs would be effective if required.  Of course, label restrictions apply including the requirement for the site (e.g., nursery, landscape ornamentals, etc.) to appear on the label.  Also, look closely for any statements cautioning against applying the product to grasses.

Online resources commonly recommend applying a heavy jet of water to blast away lace bugs.  However, adults have wings, so they may thwart the "water park ride" approach to management by simply flying back to the leaves.  I believe water-drenched grass lace bugs may be even more adept at recovering from a deluge given that they can simply crawl back up the grass stems … perhaps waiving their middle tarsi at their soaking source.