Be Alert to the Redbud Leaffolder 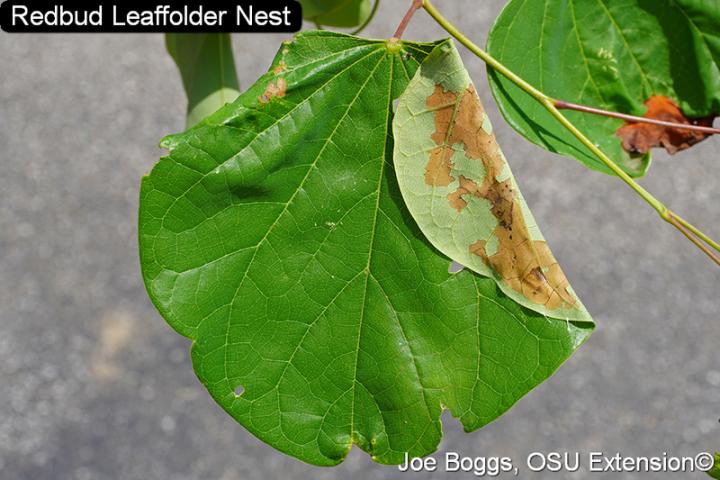 The unusual damage caused by first-generation Redbud Leaffolders (Fascista cercerisella, family Gelechiidae) on their namesake host (Cercis canadensis) is becoming evident in southwest Ohio.  Thus far, populations of this native moth appear to be sporadic and highly localized.  However, population densities and distribution may change with the appearances of the second and third generations. 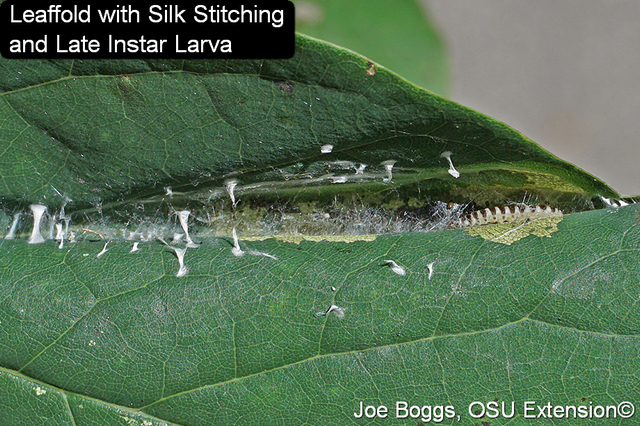 The caterpillars use silk to stitch together leaf edges to produce nests that conform to the "leaffolder" common name that's approved by the Entomological Society of America (ESA).  Pulling apart the fold will expose the silk stitching. 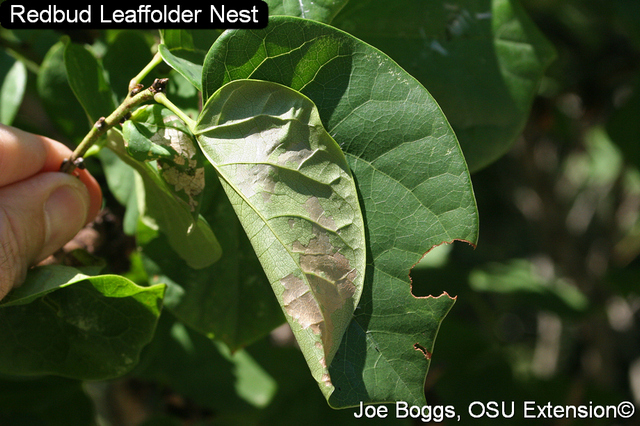 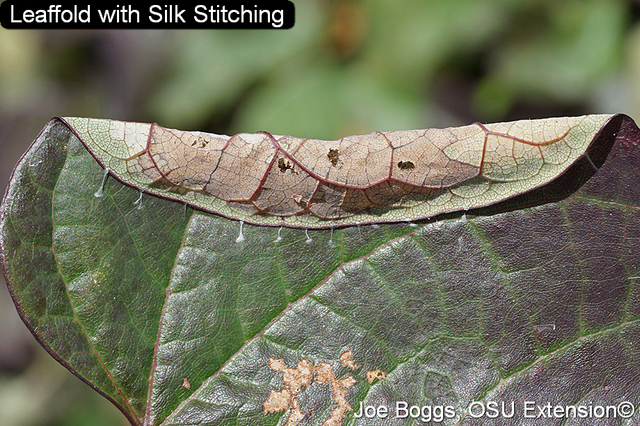 However, some nonconformist caterpillars make nests like a "leaftier" by stitching together neighboring leaves.  In fact, various online resources refer to the caterpillars as the “redbud leaftier” which is a commonly used common name that’s not approved by the ESA. 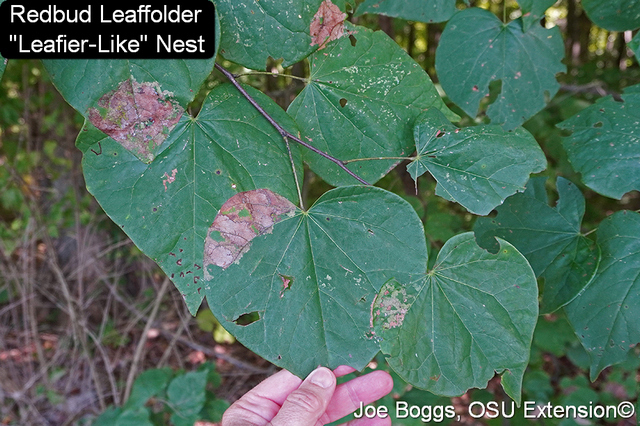 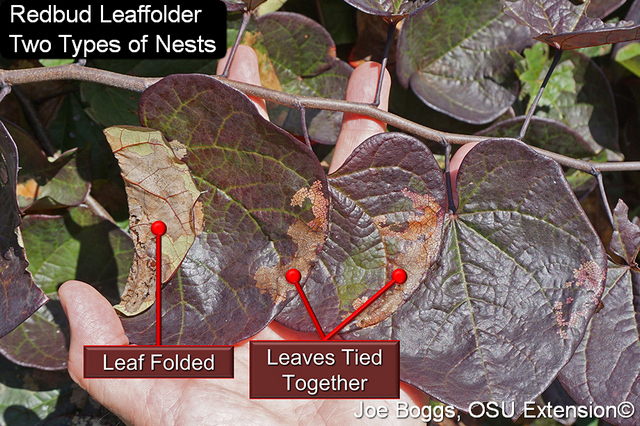 Caterpillars live between the leaf layers where they feed beneath strands of heavy silk.  Late instars commonly live in silk tubes festooned with frass pellets.  They emerge out of their protective tubes to feed. 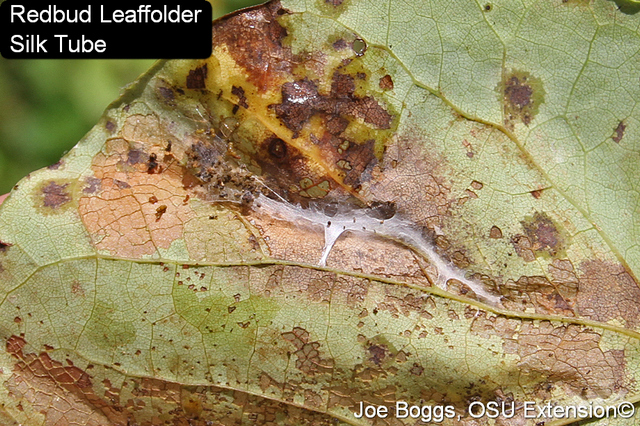 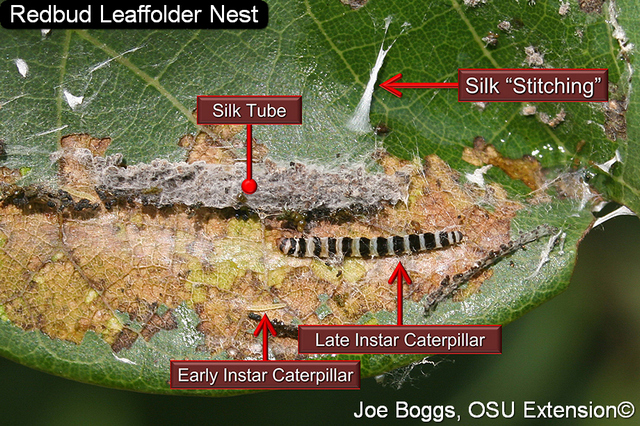 The caterpillars feed as skeletonizers, consuming the upper and lower leaf surfaces.  The affected areas turn orangish-brown which sharply contrasts with the normal dark green color of the foliage. 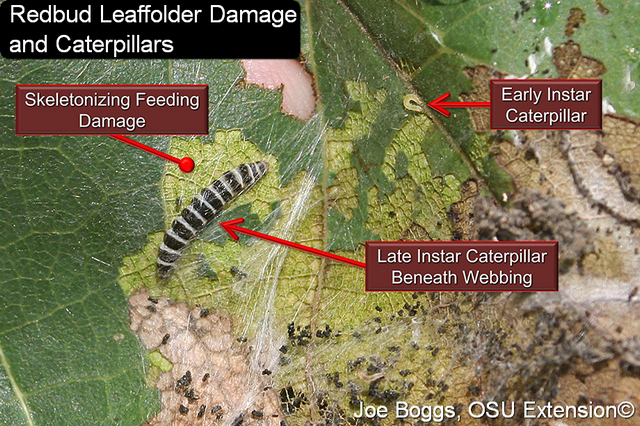 Early instar caterpillars are cream-colored and have no discernible markings.  As the caterpillars mature, markings begin to develop with alternating segments darkening to produce a striking appearance of black and light-green bands running the length of the body.  Late instar caterpillars resemble tiny, banded sea kraits (snakes).  When disturbed, the caterpillars wiggle back and forth violently further enhancing their tiny snake impersonation.  They have great entertainment value! 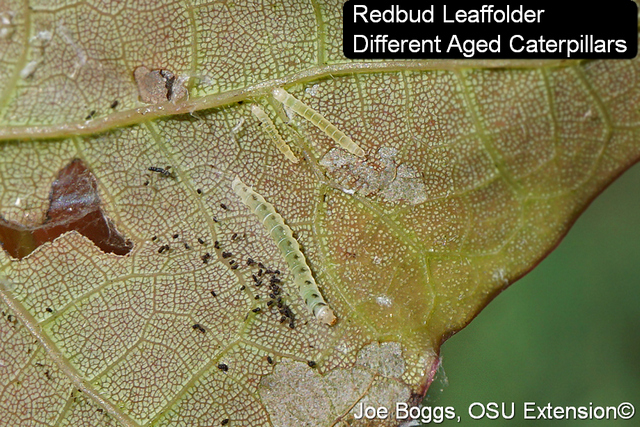 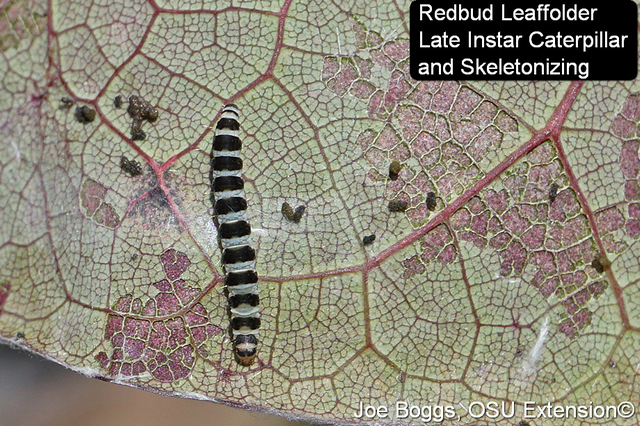 Like fall webworms (Hyphantria cunea), the velvety black female leaffolder moths tend to lay their eggs on or near the leaves from which they developed.  So, the nests are expanded with each successive generation.  However, the generations commonly overlap meaning that it's not unusual to find both early and late instar caterpillars in the same nest. 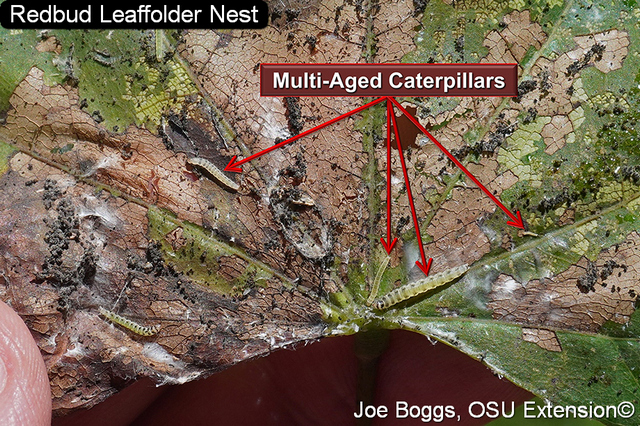 The most significant damage occurs late in the season owing to population increases with each generation.  The moth spends the winter as pupae in debris and fallen leaves beneath infested trees.

The nest-making caterpillars are commonly found on wild eastern redbuds, but infestations tend to be light and irregularly distributed throughout the canopy.  I've never seen appreciable damage; the leaffolders are mainly an oddity.

However, I commonly see damaging populations on weeping redbuds; particularly 'Ruby Falls'.  Whether this is due to host preference or simply because the vertical orientation of the leaves makes the damage more obvious is an open question.  I have found no studies on host preference across different eastern redbuds. 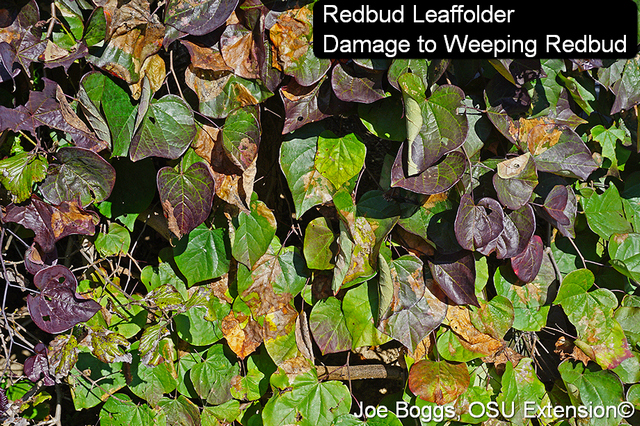 The redbud leaffolder seldom causes enough damage to its namesake host in landscapes or forests to significantly affect the overall health of infested trees.  However, it can seriously reduce the aesthetic appeal of weeping redbuds.  Where practical, populations can be reduced by pinching nests to kill caterpillars.  Raking and destroying fallen leaves will also reduce localized numbers by eliminating overwintering moth pupae.

Even more surprising, the foliar-applied efficacy trial performed in late July revealed that Talstar P (bifenthrin) applied at a rate of 10.0 fl.oz./100 gal. was highly effective producing a 98.1% reduction in the number of caterpillars.  The author did not speculate on how or why a non-systemic topically applied insecticide could be so effective against caterpillars presumably located out of the reach of such an application.  The systemic neonicotinoid Acelepryn 1.67 SC applied at the rates of 1.0 fl.oz and 2.0 fl.oz./100 gal. provided a 71.2% and 75% reduction in the number of caterpillars.