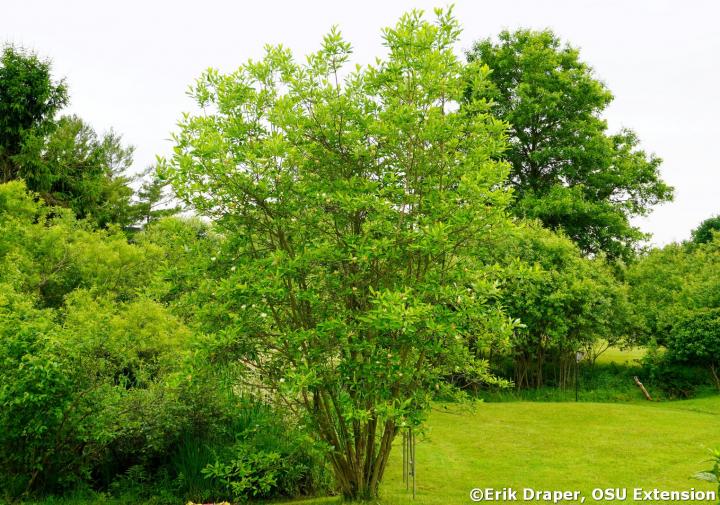 Most individuals associate magnolias blooming with early Spring but those are not magnolias that are currently in bloom.  The magnolias blooming which are capturing the attention of NEOhio plant lovers are the lesser noticed Magnolia virginiana commonly called Sweetbay, Laurel or Swamp Magnolia.  Sweetbay Magnolia (SBM) is an excellent native tree that is not nearly as well-known or used as often in landscapes as other magnolias.  The native range of SBM extends mostly along the Atlantic and Gulf Coastal Plains beginning at Long Island and heading south all the way down to southern Florida!  It continues on around westward to eastern Texas and also extends north up into southern Arkansas and even into southwest Tennessee.  SBM love acidic soils and especially favor growing in moist woodlands, along streams and swamps but can tolerate well-drained soil too!

The growth habit of SBM can be awkward for those who like their trees to retain a strict shape.  Appearances can vary from the traditional single trunk to a multi-stemmed tree, to a broadly rounded large shrub.  Trees are much smaller in the northern edges of its cold tolerance range attaining heights and widths of 10-20 feet; divergently, in the more southern part of its range SBM can achieve towering heights of 60 feet or more!

This small stature tree is semi-evergreen to deciduous in our northern clime, while remaining an evergreen in the deep South.  The variety australis, which literally means “southern”, was described in 1919 by Professor Charles Sprague Sargent from plants growing in Florida, Texas, North and South Carolina.  Interestingly enough, this variety grows larger and more tree-like, with evergreen leaf characteristics, having branches and petioles that appear more pubescent than the species.

One of the greatest features of SBM are its wonderful leaves.  The leaves are alternate, simple, and elliptic to oblong-lanceolate in shape. SBM leaves are 3-6 inches in length, with a lustrous dark green leaf surface that flashes a frosty silvery-blue (glaucous) underside as leaves flutter in the winds.

Contrary to most of the magnolias, SBM flowers are smaller, solitary, creamy-white with a pleasant, light lemony fragrance. The individual flowers are approximately 2-3 inches in width, composed of 9-12 petals and form an open cup-shape.  SBM bloom begins late May and can last through mid-August because bloom is never an overwhelming WOW experience. Rather, it’s a subtle scattering of pleasant blooms throughout the tree, creating an extended floral experience in the landscape.

SBM has bright red fruits emerging in September from the 2 inch-long aggregate follicles of the ovoid or egg-shaped capsules/cones that form from the flowers.  I have found that these ripe fruits, when smashed between the fingers, will exude the most incredible, exotic, tropical fragrance.  That is one of my yearly, must do, smash and sniff, horticultural experiences!  Give it a try this year… guaranteed it will become a fall ritual for you too!