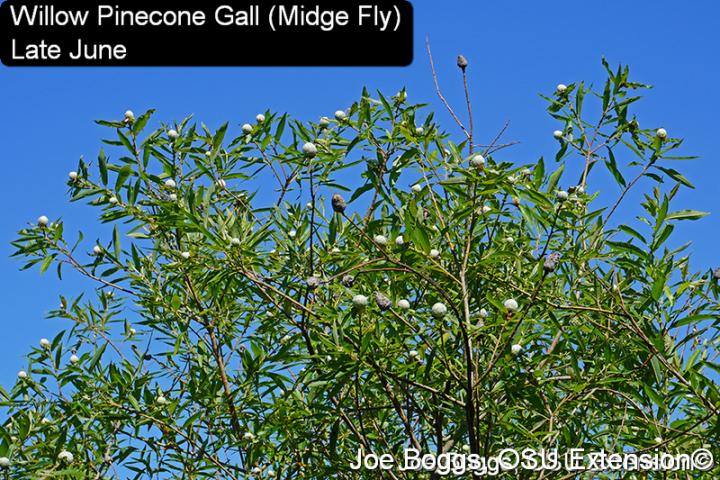 Willow Pinecone Galls, with their faux seed scales, bear a striking resemblance to pine cones, particularly when the galls darken during the winter.  Indeed, an e-mail message I received this past spring started with, “My willow has these things that look like pine cones …” 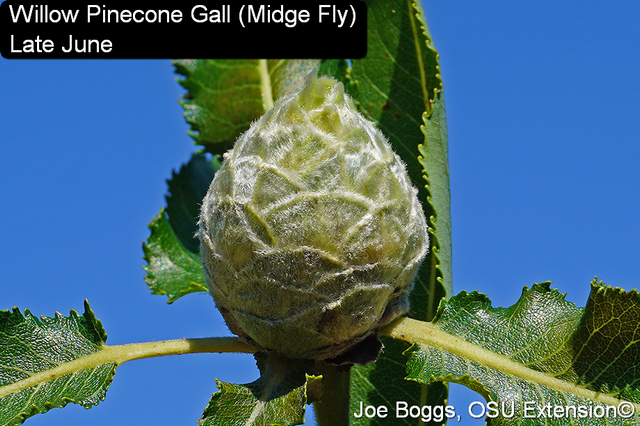 The galls are induced by the so-called Willow Pinecone Gall Midge, Rabdophaga strobiloides (family Cecidomyiidae), to house, nourish, and protect a single fly larva (maggot) located deep within the gall.  The midge galls arise from apical buds, so they are only found at the tips of branches. 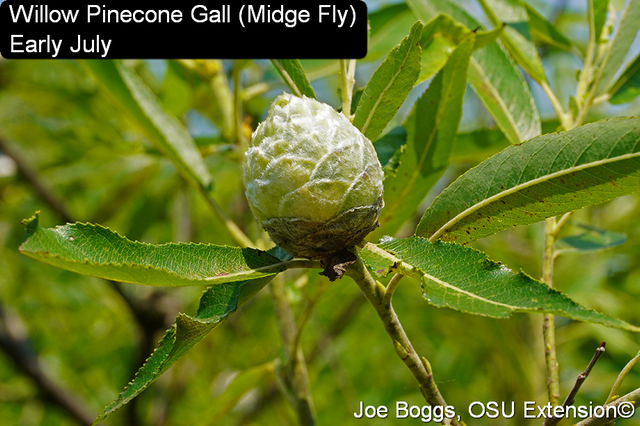 The midge fly gall-maker is univoltine meaning only one generation is produced per season.  However, last year’s “spent” galls may cling to the trees throughout this season which can produce some confusion regarding the midge fly’s life cycle. 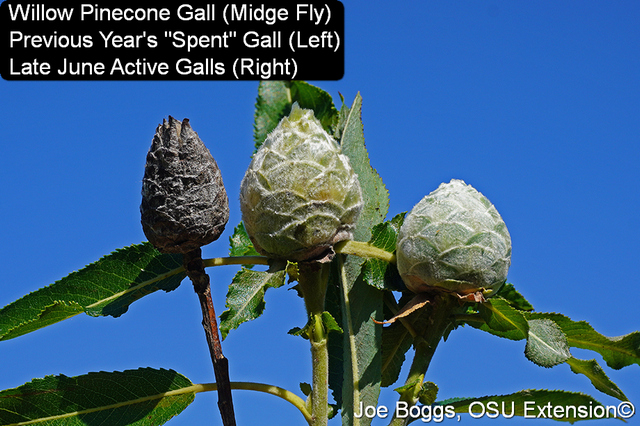 The literature lists several willow hosts; however, I've only ever found them in Ohio on black willow (Salix nigra).  Willow pinecone galls have been reported from New England to California and north to Alaska.  Although other Rabdophaga species actuate galls on willow, R. strobiloides is apparently the only gall-midge that induces a single pine cone-like gall at the tips of willow stems. 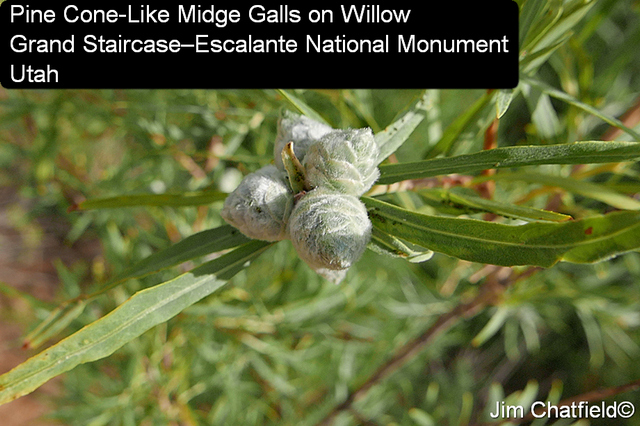 As with the vast majority of plant galls produced under the direction of arthropod gall-makers, willow pinecone galls cause no appreciable harm to the overall health of their willow host.  In fact, I believe they add ornamental value to otherwise lackluster black willows and even provide winter interest.  Of course, as a gall-maniac, I may be biased. 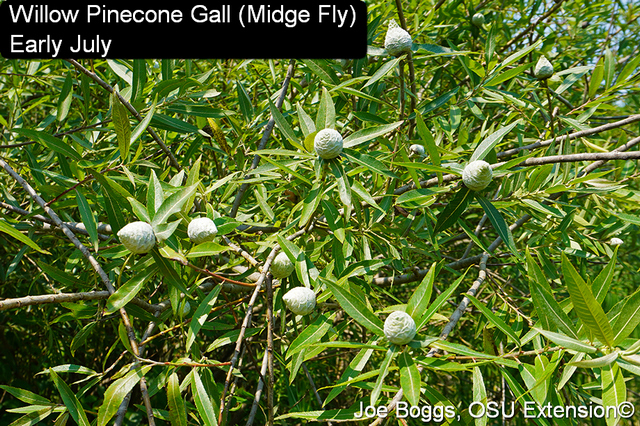 Carefully slicing the galls open lengthwise at this time of the year will reveal a multi-layered structure surrounding a single orange to orangish-yellow midge fly maggot nestled within a central elongated chamber.  The layers are packed with dense down-like fibers presumably to provide a modicum of protection against gall-maker enemies and to serve as winter insulation. 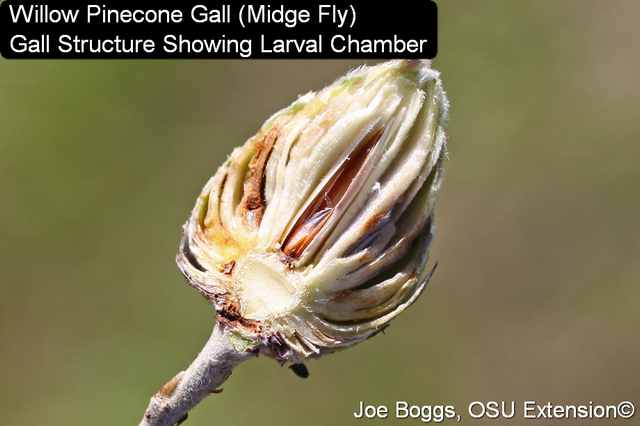 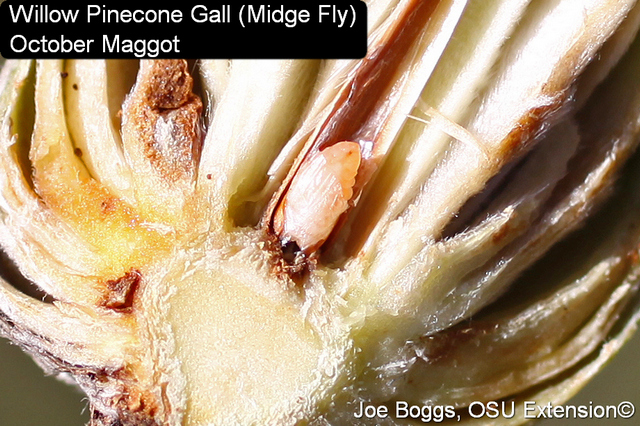 The gall maggots develop through three instar stages throughout the growing season.  Likewise, the galls change their size and appearance as the midge maggots mature.  The galls at first appear as a dense cluster of curved, nascent leaves.  They later pass through a "ball stage" before becoming elongated into the final cone-like structure. 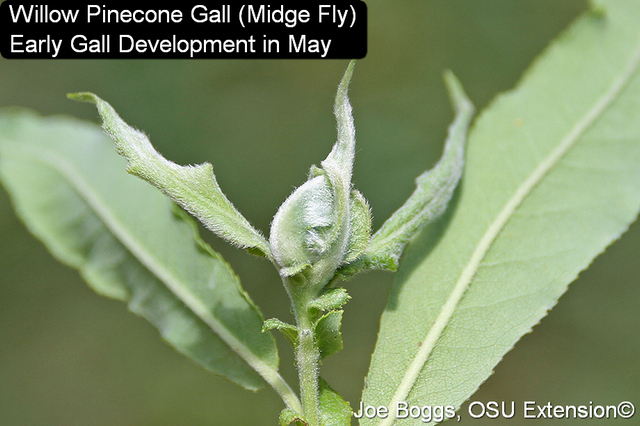 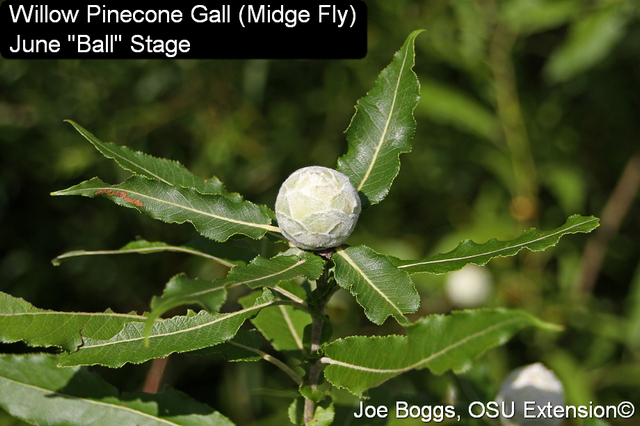 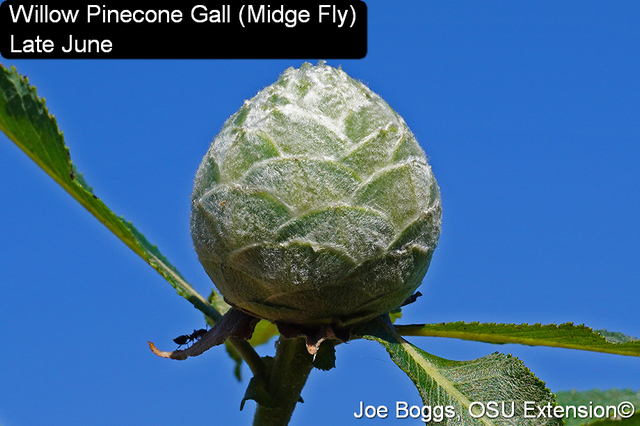 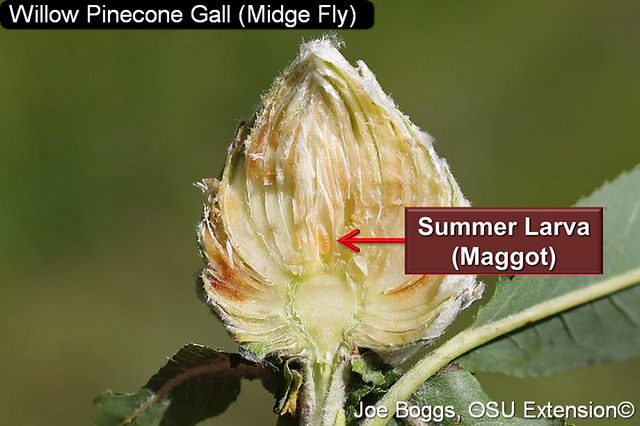 In the fall, the third instar maggots line their chamber with a thin layer of silk and spend the winter in stasis.  Pupation occurs in the spring with adults emerging just before bud break. 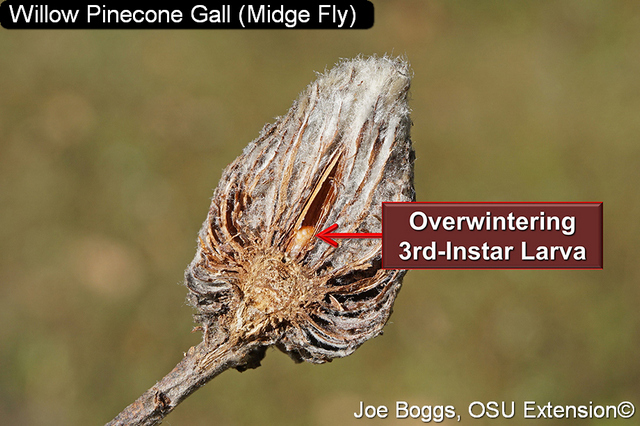 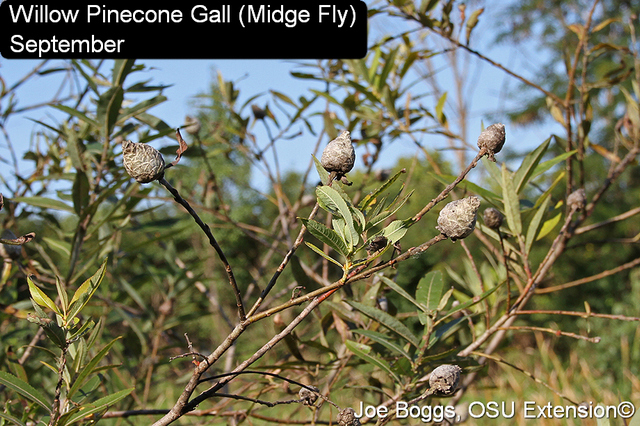 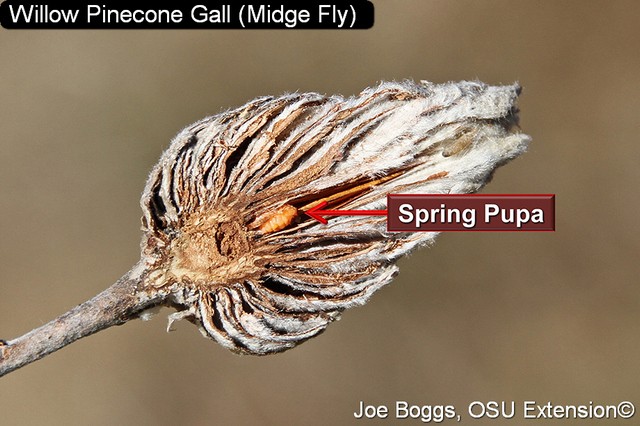 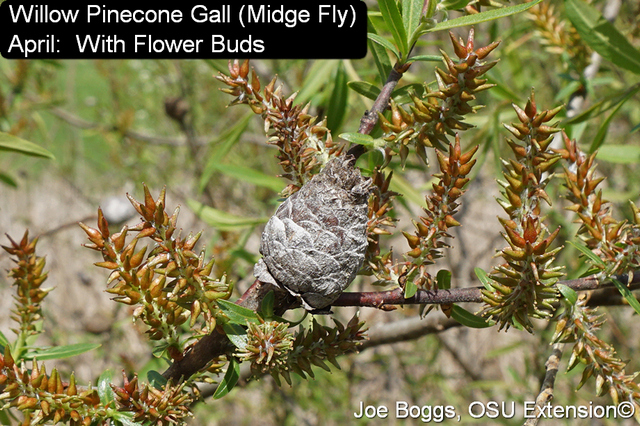 What happens once the adult midge flies emerge applies to both gall-making midge flies (family Cecidomyiidae) as well as gall-wasps (family Cynipidae).  It's one of the most fascinating things you'll ever come across in nature; however, it remains poorly understood.

New galls are initiated when females use their sharp ovipositors (= egg depositor) to insert an egg into an apical bud which is why the galls always appear at the tips of twigs.  The females introduce chemicals into the oviposition wound.  Whether the chemicals coat their ovipositors or are found in their saliva or both, is not well documented.  The eggs may also exude gall growth-directing chemicals, but this is also poorly understood.

However, it is known that the chemicals turn plant genes on and off in the meristematic bud tissue at just the right time to direct gall formation.  It is highly directed growth specific to the gall-maker.  In this case, the improbable-looking willow pinecone galls are formed; they never develop into any other type of gall. 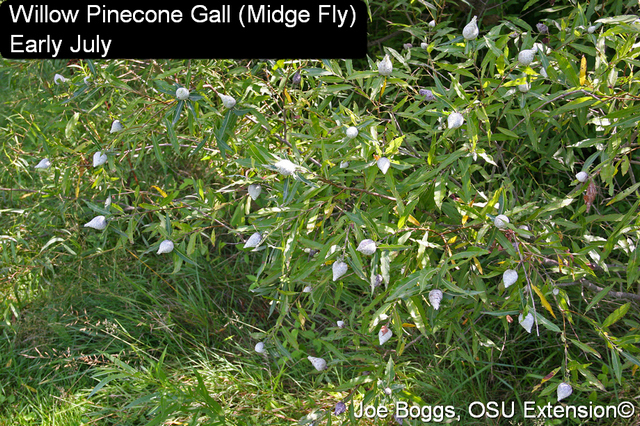 In teaching about plant galls, I always stress that galls produced under the direction of an arthropod gall-maker consist entirely of plant tissue.  Proof of this point is provided in the image below.  The willow pinecone gall shows clear evidence of a leaf-infecting willow rust fungus (Melampsora spp.) which shouldn’t be surprising given the gall was formed from hi-jacked leaf tissue. 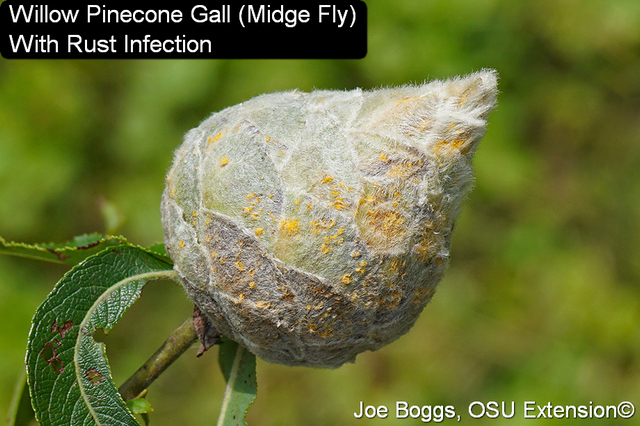 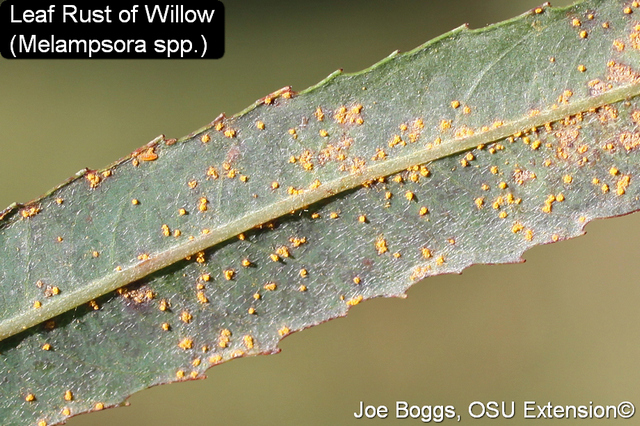 Although willow pinecone galls cause no appreciable harm to the health of their willow hosts, it doesn’t mean they don't produce measurable effects beyond their strange appearance.  As noted above, the midge fly gall-maker only hijacks apical buds, so the galls are only found at the tips of willow stems.  If you compare non-galled stems to galled stems, you may observe that the galled stems are more robust.

Research has shown that the willow pinecone gall midge manipulates their host's growth and development to funnel tree resources to their maggot progeny.  Stems with a gall at the tip become significantly larger in diameter compared to twigs without galls.  The increased diameter even occurs if the foliage is stripped so the leaves aren’t directly contributing photosynthetic resources to stem girth.

However, life isn’t always easy for the willow pinecone gall midge maggots.  Researchers conducting a four-year study in Alberta, Canada, on the parasitoid and predator community associated with the willow galls observed that fly maggot mortality ranged from 51 to 78% throughout the study.

Midge mortality was dominated by bird predation and parasitism by the wasps Torymus cecidomyiae (Hymenoptera: Torymidae) and Gastrancistrus sp. (Hymenoptera: Pteromalidae).  The birds selected the smallest-sized galls while the parasitoids focused their attention on medium-diameter galls.  Heavy losses to predation and parasitism may help to explain my observations in Ohio that the number of pinecone galls tends to rise and fall dramatically from year to year.

Of course, what’s bad for the gall-maker maggots is good for others.  Some ecologists consider Rabdophaga gall-maker midge flies to be keystone species for a wide range of predators, parasitoids, and hyperparasitoids.  Indeed, where willow galls are common, the occasional maggot meal may play an important role in the winter survival of several birds belonging to the songbird family Paridae including chickadees and titmice.  Thus, the function of willow pinecone galls in the grand ecological scheme of things is more than meets the eye.