Coneflower Rosette Mite: Tufted Seed Heads are on the Rise 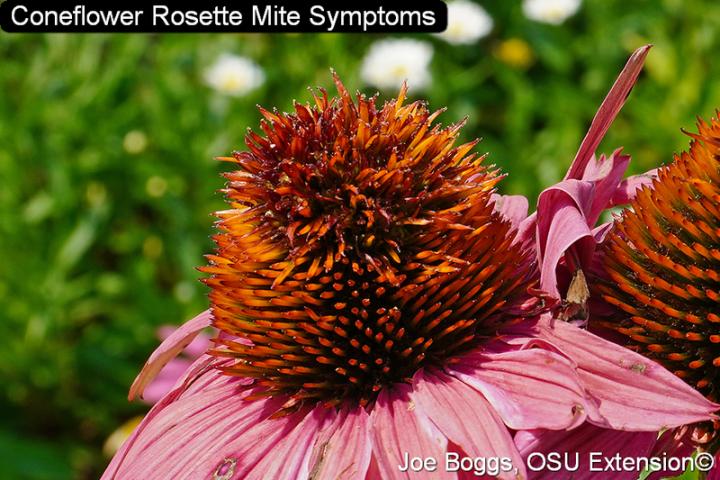 Tufted flower parts that rise rosette-like from coneflower cones are symptoms of an eriophyid mite (family Eriophyidae) that has yet to be taxonomically categorized, so it has no scientific name or approved common name.  However, the mite is generally referred to as the Coneflower Rosette Mite based on the damage that it causes to coneflowers. 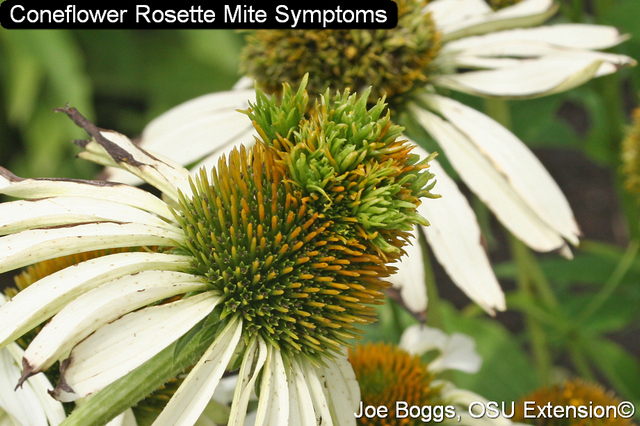 The coneflower rosette mites live inside the developing flowers where they feed at the base of the flowers by puncturing plant cells with stylets and sucking in the cell contents.  As a result, elongated rosette-like tufts of stunted and distorted flower parts will sprout from the tops or sides of the cones of coneflowers. 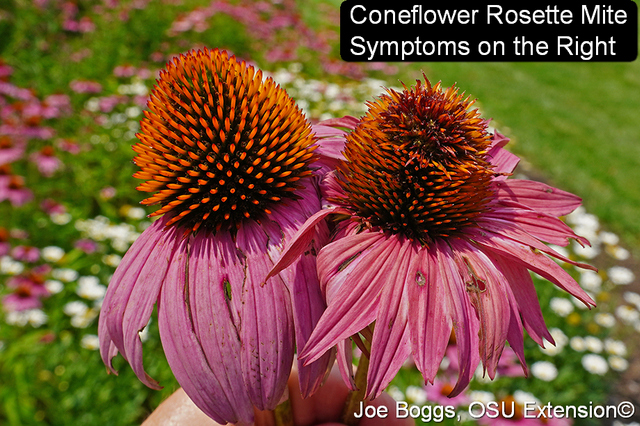 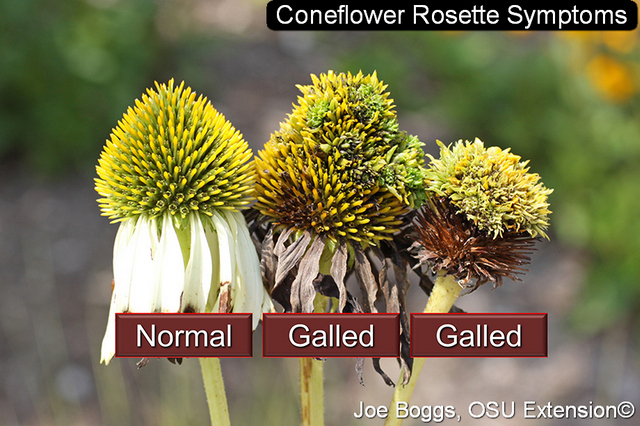 Eriophyid mites are unique among other mites both in their size and anatomy.  Spider mites can be seen clearly with a 10x hand lens; however, you need a higher magnification to see the details of the unusual eriophyid mite body plan. 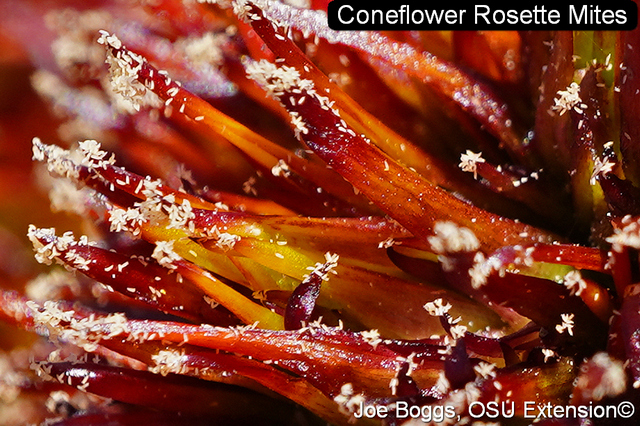 Normally, we say that eriophyid mites can’t be clearly seen without some form of magnification.  However, when large collections of eriophyids are present, they can be seen with the naked eye as illustrated in the images below.  The eriophyids make the tips of the coneflower florets look like they’ve been dipped in white dust. 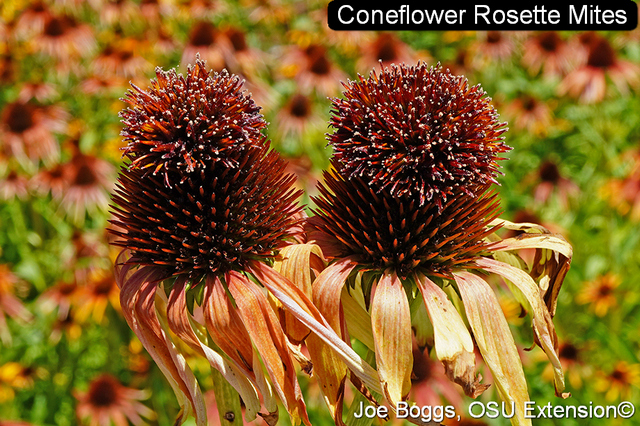 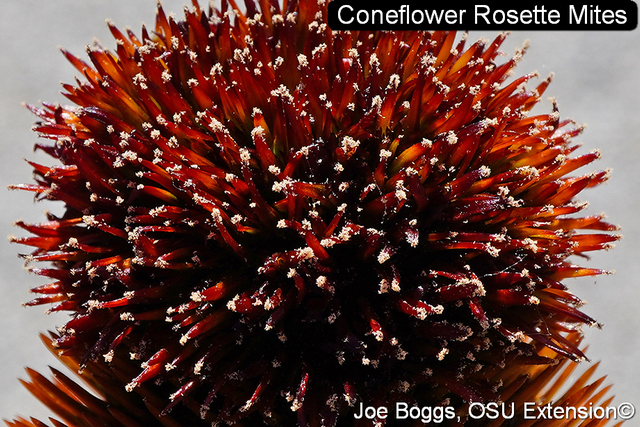 Eriophyid mites can be spread by the wind or sometimes by animals such as birds.  Coneflower rosette mites practice an interesting behavior to increase their chances of being moved to new locations.  The mites crawl to the tips of the florets and hold on with their caudal sucker so their legs are hanging in the air to snag a passing ride or so they can be blown to neighboring plants.

Movement by the wind is not unique to coneflower rosette mites.  Research on three species of grass-feeding eriophyids revealed that wind-drifting behavior was triggered by both increasing temperature and wind speed.  I observed this with the coneflower mites earlier this week.  As late morning temperatures rose and wind speeds increased, greater numbers of mites were observed at the tips of the florets. This movement to the floret tips is clearly illustrated in the image below.  The mites have not yet made the trip on the seed head on the left. 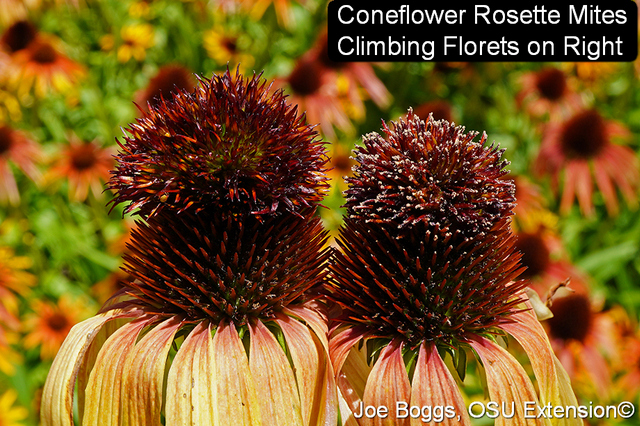 The damage caused by the coneflower rosette mite is not only unsightly; it can also seriously reduce seed production and thus natural re-seeding.  Thus, management options should be applied as soon as the rosette symptoms are detected. 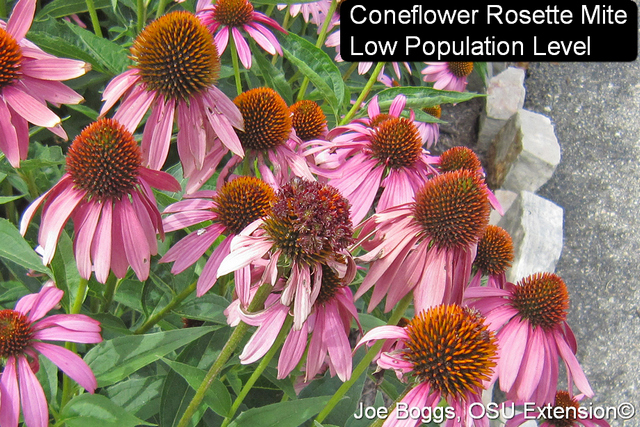 Sanitation:  cutting and destroying flower heads deformed by mite activity before the mites seek new horizons will reduce mite populations.  However, care should be taken not to spread the mites particularly if they are clinging to the tips of the florets.  A bag or other container should be held beneath the tufted flower heads as they are cut.  Anecdotal reports indicate this management tactic can be highly effective in eliminating mites from a coneflower planting if applied annually at the first appearance of the rosette symptoms.

Miticide Applications:  although I could find no published efficacy trials specific to this eriophyid mite, Dave Shetlar (Professor Emeritus, OSU Entomology, “The Bug Doc”) reported during our weekly BYGL Zoom inservice that he has achieved excellent control with spiromesifen (e.g., Forbid, Judo).  The application was made earlier in the season when immature mites were still developing.

Spiromesifen has a unique mode of action and works by inhibiting acetyl-CoA carboxylase which is an enzyme important in lipid metabolism.  As a result, newly hatched and newly molted mites fail to develop hardened exoskeletons, so they dry out and die.  Thus, it is most effective against immature stages of mites including eggs.  The miticide works against a range of mites including eriophyids and has systemic activity which is important in translocating the active ingredient to sites where the mites feed.

More importantly, spiromesifen poses minimal risk to pollinators and predatory mites.  Of course, the label is the law.  The Forbid 4F and Judo labels do not carry restrictions against making applications that intersect with bees or other pollinators.  They also do not carry endangered species advisories preventing such applications.  Remember,  no pesticide should be applied to flowering plants unless the application (site and target) is allowed by the label.

Aster yellows is a serious, chronic disease that occurs throughout North America and may affect over 300 species of plants in 38 families including several vegetables such as carrots and potatoes.  However, as its common name implies, aster yellows occurs most often on members of the aster family and coneflowers are particularly susceptible. 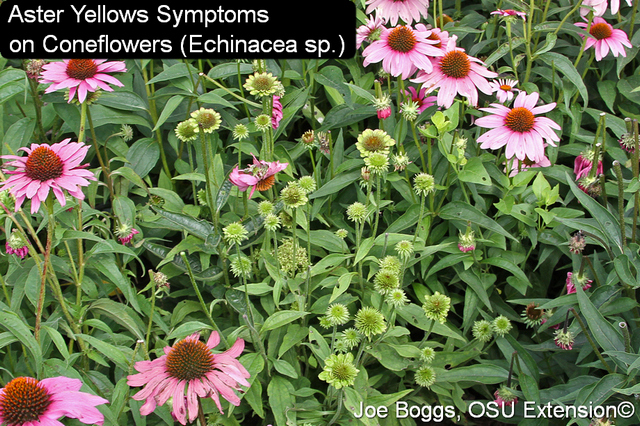 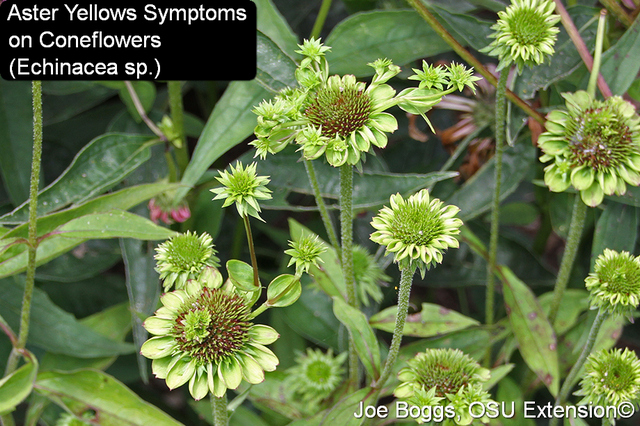 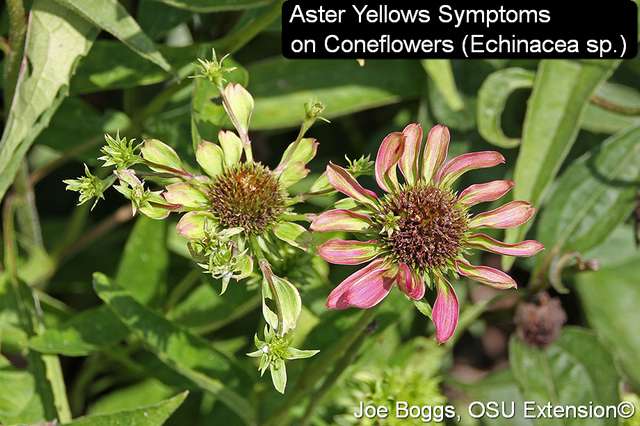 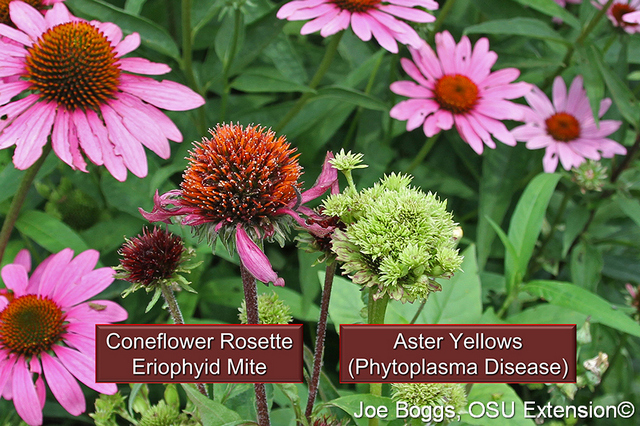 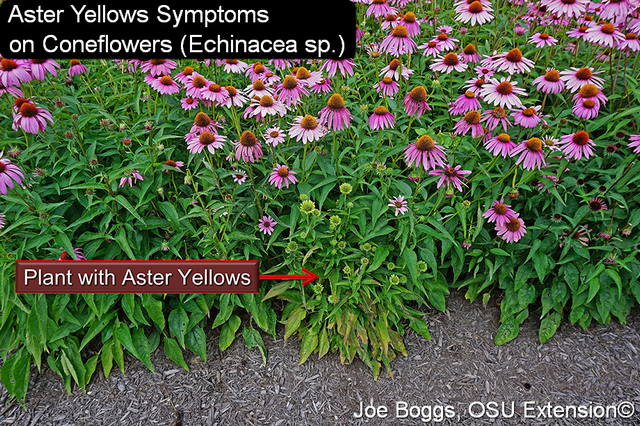