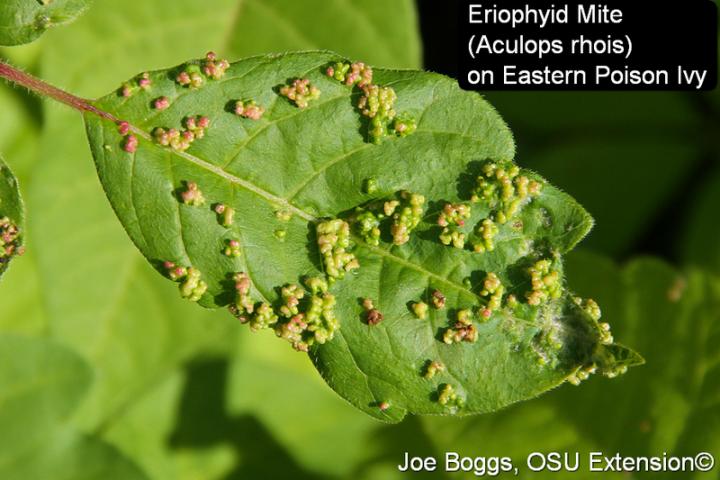 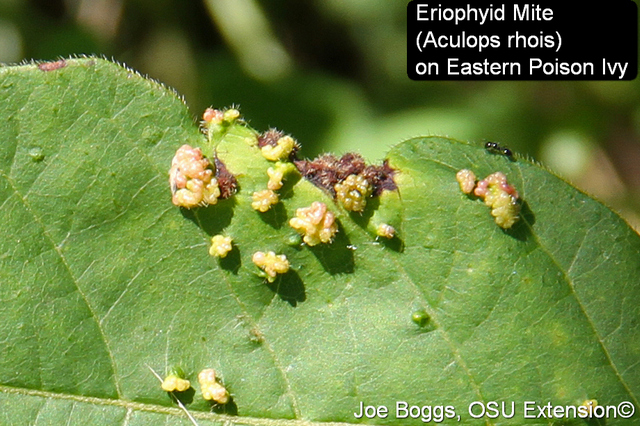 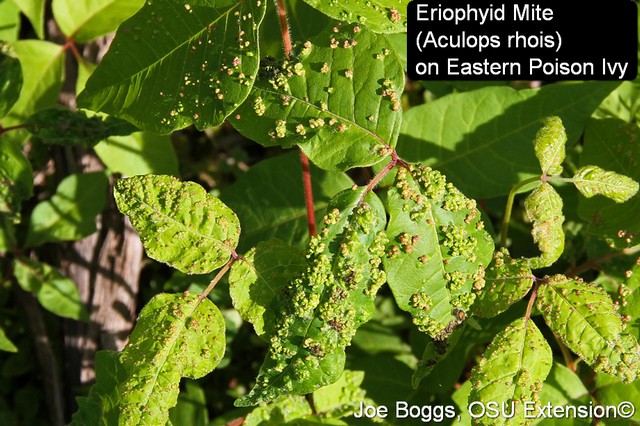 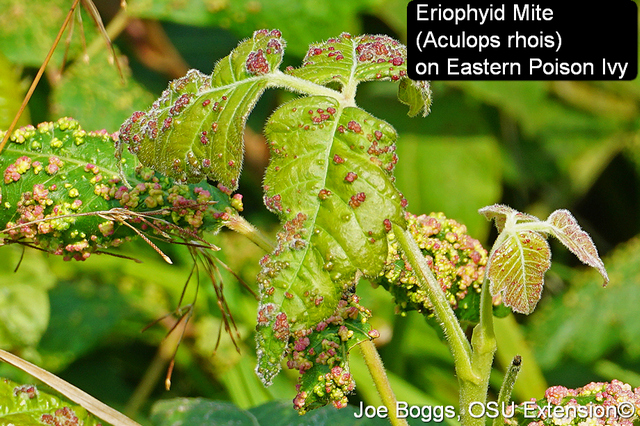 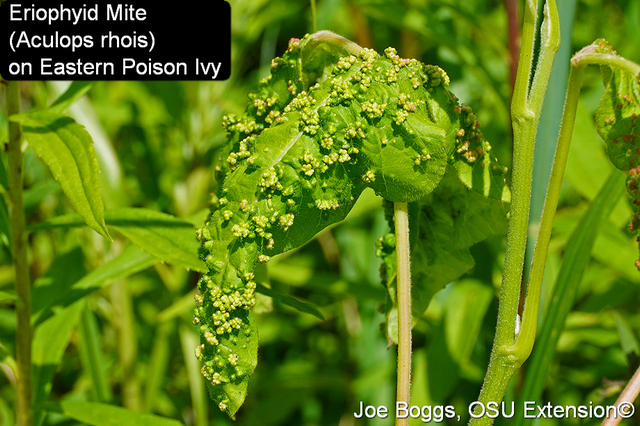 The bladder galls vaguely resemble the itchy skin blisters we suffer when we contact the plant’s oily resin called urushiol (Toxicodendron dermatitis).  I like to imagine that eriophyid gall-infested poison ivy plants suffer the same agonizing itch; but they have no fingers! 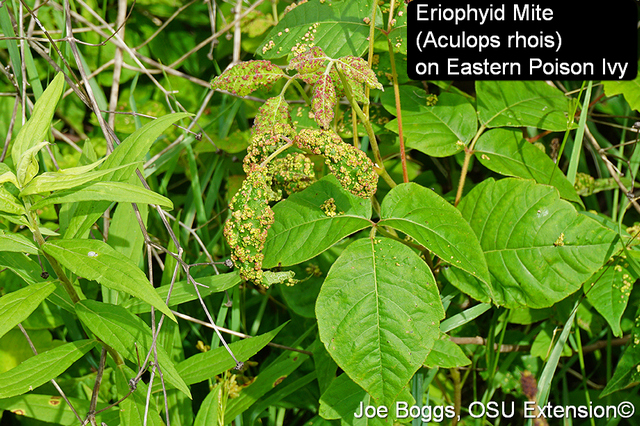 Oddly, the same eriophyid mite also produces bladder galls on Fragrant Sumac (Rhus aromatica, family Anacardiaceae).  Apparently, this is the only host of the mite that is grouped in the Rhus genus.  I could find no references in the literature indicating the mite will infest any other members. 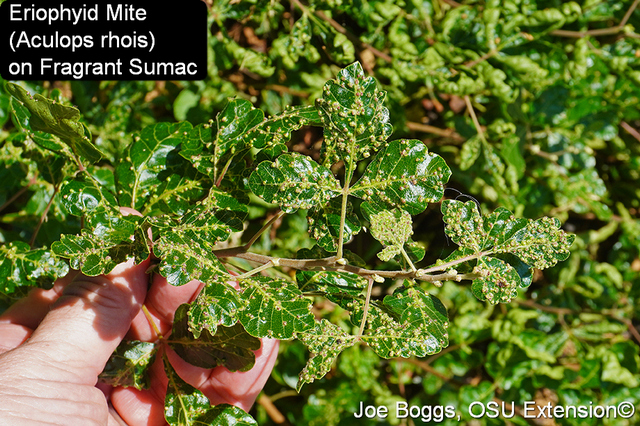 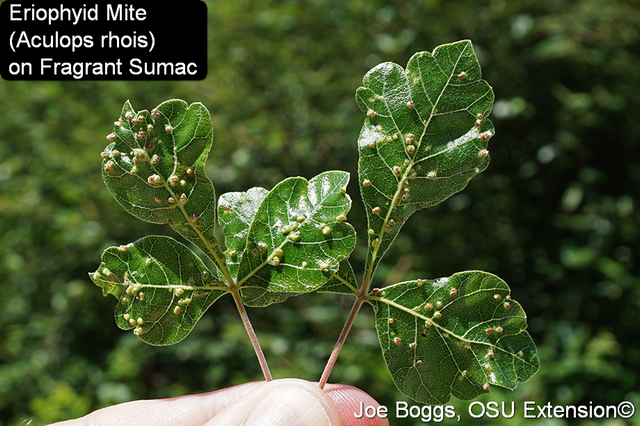 Based on personal observations, the damage to fragrant sumac does not affect overall plant health.  Likewise, I’ve never seen enough damage to poison ivy to thwart the aggressive nature of this native plant in Ohio.  However, there are reports in the literature that the mite should be investigated as a biocontrol agent for poison ivy. 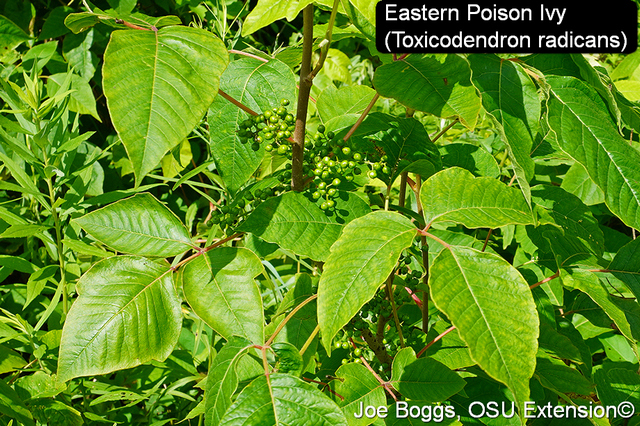 Eriophyid mites are unique among mites both in their anatomy and in the range of symptoms they produce on plants.  First, they are very small.  Spider mites can be clearly seen with a 10x hand lens.  At least a 40x magnification is required to see eriophyid mites.

Eriophyids can generate a wide range of plant symptoms depending on the mite species.  However, one thing they typically have in common is a narrow host range often involving only one plant species or several species in a single genus.

For example, The eriophyid mite Vasates quadripedes, which is sometimes called the Maple Bladder Gall Mite, produces bladder galls on the upper leaf surfaces of both silver maple (Acer saccharinum) and red maple (A. rubrum).  Like the bladder galls on poison ivy, the maple bladder galls change colors as they age from light green to deep red. 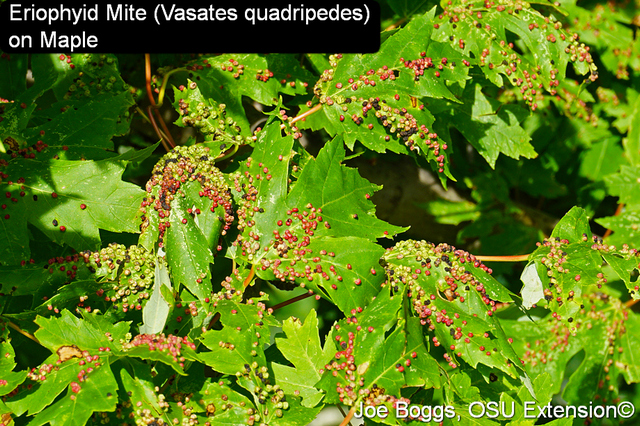 The eriophyid Eriophyes negundi confines its gall-making handiwork to a single Acer species, boxelder (A. negundo).  The galls also undergo a distinctive change in appearance as they age.  They transform from small, green bladder galls to large wart-like protrusions with velvet-like patches on the corresponding lower leaf surface.  They are sometimes called "boxelder velvet galls." 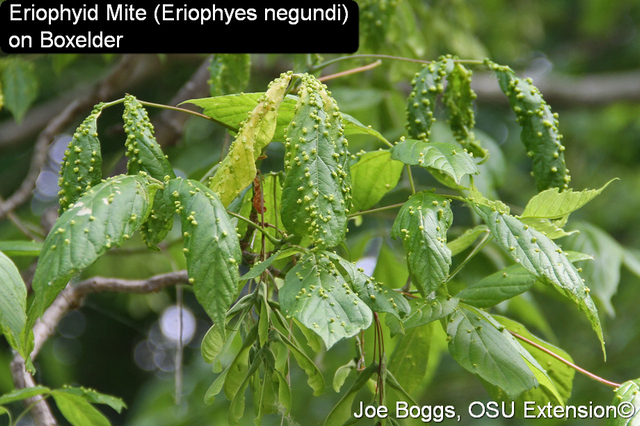 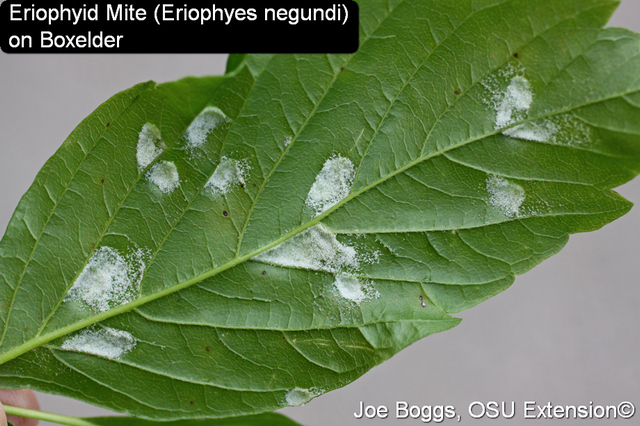 On a side note, I believe boxelder challenges the poison ivy maxim, “leaves (leaflets) of three, leave it be.”  The compound leaves of boxelder may have 3 – 5 leaflets; however, the 3-leaflet versions have caused me to quickly pull my arm away from mixed foliage on several occasions. 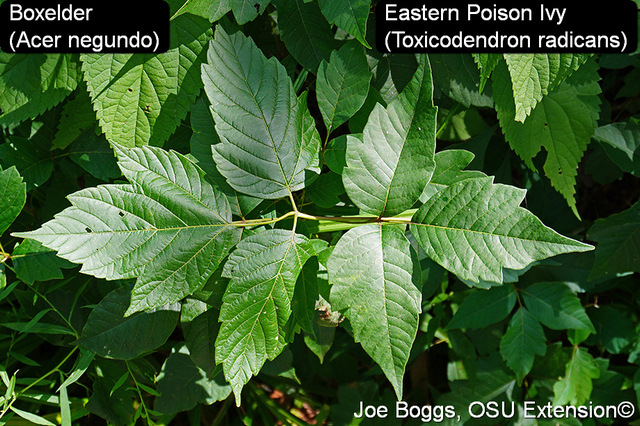 At one time, poison ivy, poison oak, poison sumac, and aromatic sumac were grouped in the genus Rhus.  So, it made sense that the poison ivy leaf gall mite could infest all of these “closely related” species. 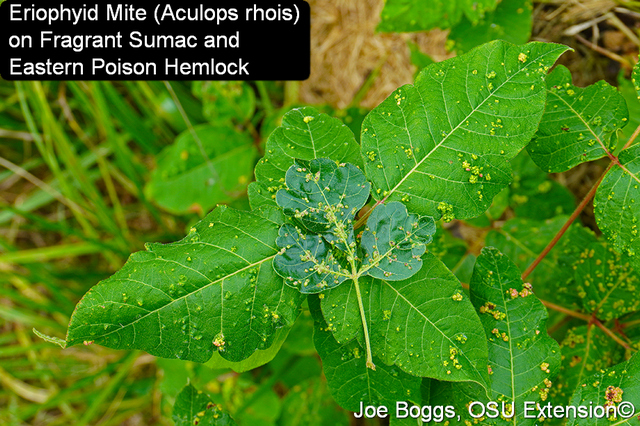 However, plant taxonomists have upset the gall-cart by pulling poison ivy, oak, and sumac out of Rhus and placing them in the genus Toxicodendron.  Now the host range of the eriophyid mite makes less sense.

I tried to gain further understanding by untangling the taxonomic wanderings of poison ivy, oak, and sumac but found myself going down a rabbit hole.  It seemed fitting since taxonomists once grouped rabbits with rodents (order Rodentia) until the early 20th century.