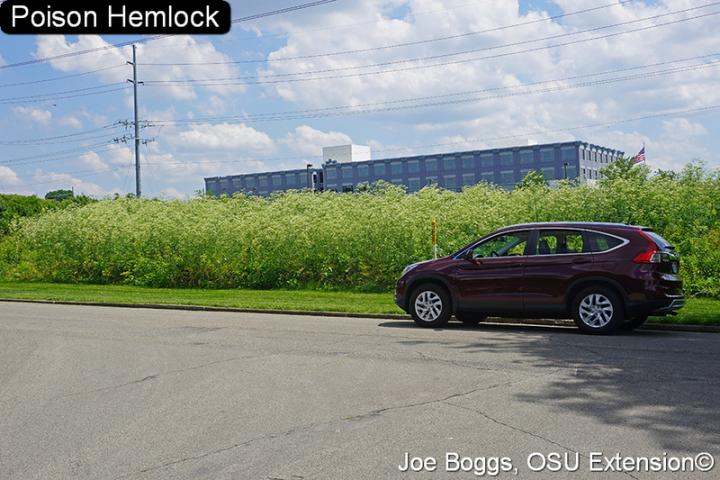 Poison hemlock (Conium maculatum) is in full flower in much of Ohio with some plants showing signs of senescence in the southern part of the state meaning flowers are mature and seeds will soon follow.  This means it’s too late to reduce the seed bank by targeting flowering plants with herbicides or mowing.

The current floral display shows why poison hemlock was imported into the U.S. as an ornamental in the late 1800s from Europe, West Asia, and North Africa.  Rogue plants remained relatively rare until around 30 years ago.  Since that time, poison hemlock has elevated its profile from an uncommon oddity to a common threat. 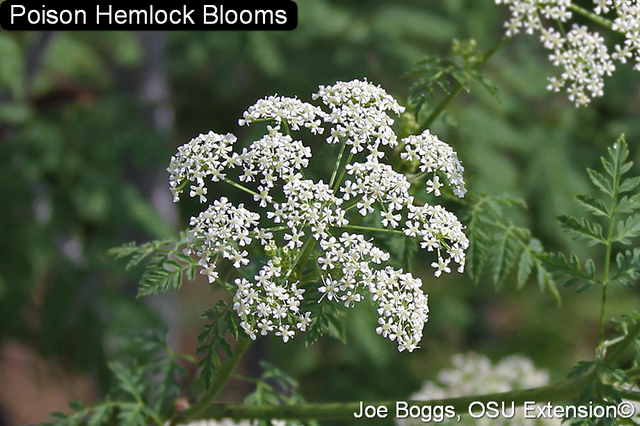 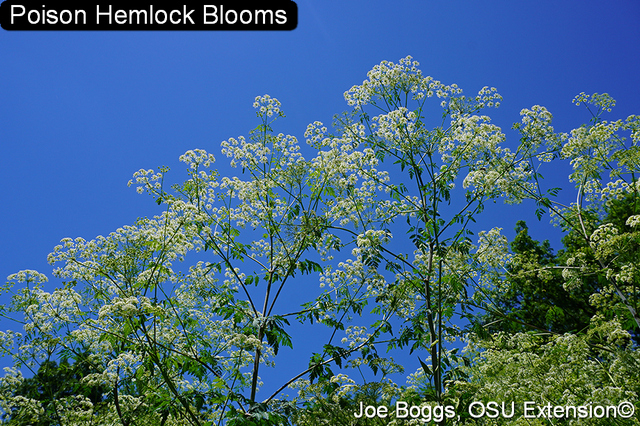 This non-native weed is a member of the carrot family, Apiaceae.  The old name for the family was Umbelliferae which refers to the umbel flowers.  The flowers are a key family feature with short flower stalks rising from a common point like the ribs on an umbrella. 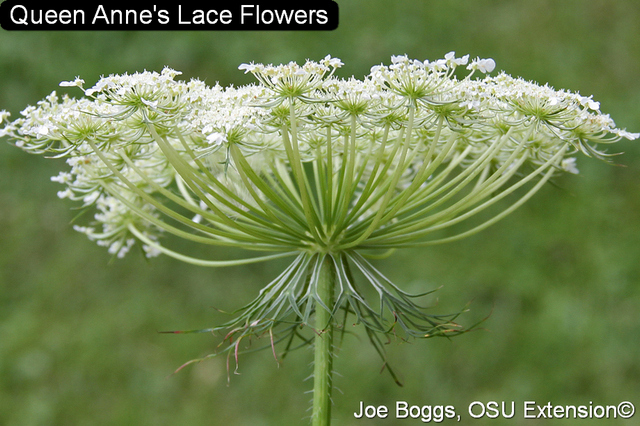 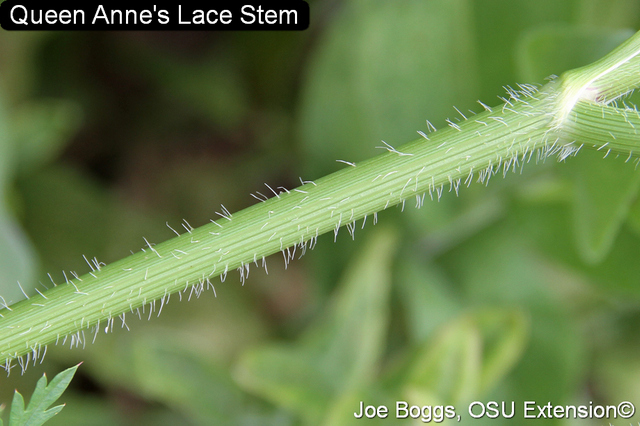 All stages of the poison hemlock plant have dark-green to bluish-green leaves that are 3-4 times pinnately compound.  The deeply cut parsley or carrot-like leaflets have sharp points. 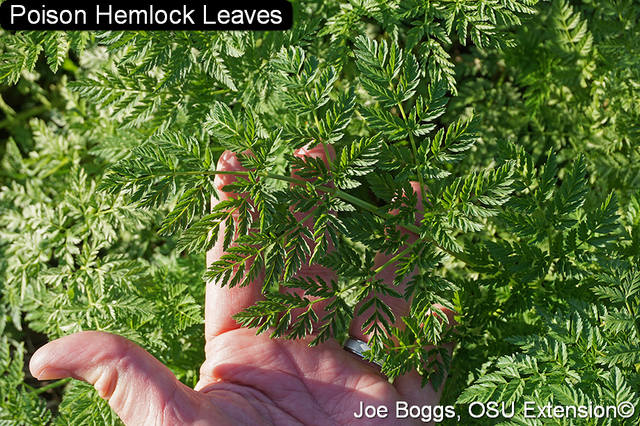 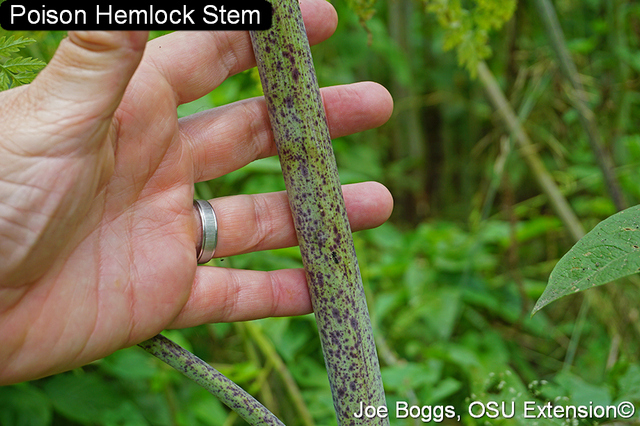 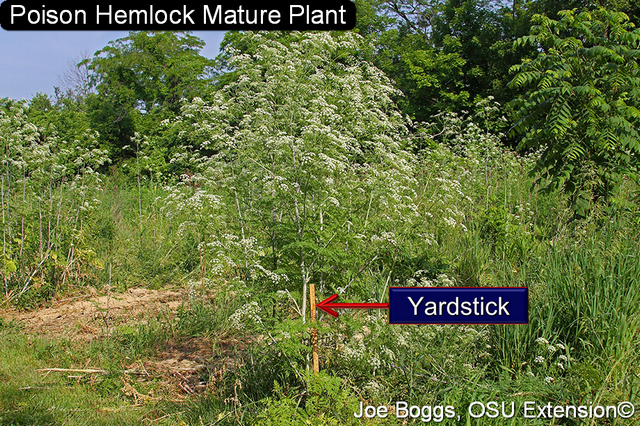 Poison hemlock has a biennial life cycle. The first year is spent in the “vegetative stage” as a low-growing basal rosette.  Plants “bolt” during the second year “reproductive stage” to produce erect multi-branched stems topped with umbrella-like flowers.  Of course, plants bolted long ago in southwest Ohio. 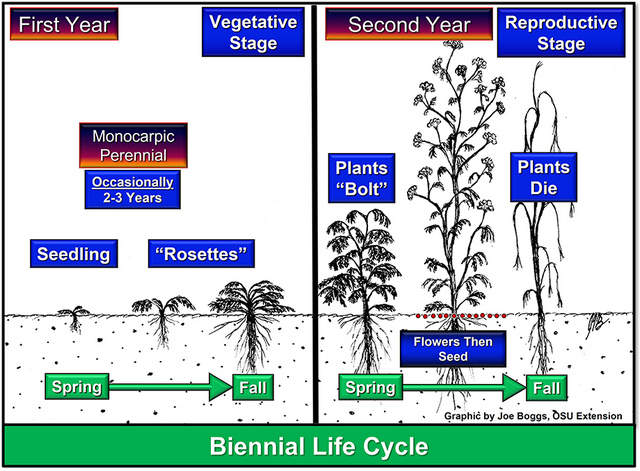 It’s important to keep in mind that the graphic above provides a generalized view of a biennial life cycle.  In reality, there can be considerable variability in the timing of events meaning that the growth stages within a group of poison hemlock plants are seldom synchronized.  It’s common for first-season vegetive plants to be mixed with second-season reproductive plants. 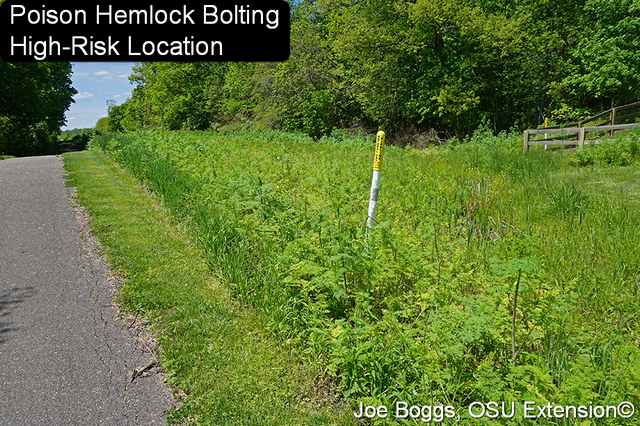 Seed viability as well as the timing of seed germination also affects what we see.  Poison hemlock is a prolific seed producer.  Research has shown that seed production ranges from 1,700 to as high as 39,000 seeds per plant with seed germination rates averaging around 85%.  Seeds remain viable for 4 – 6 years.  This means that management tactics must account for new plants arising annually from the “seed bank” until there are no longer any viable seeds to contribute to infestations. 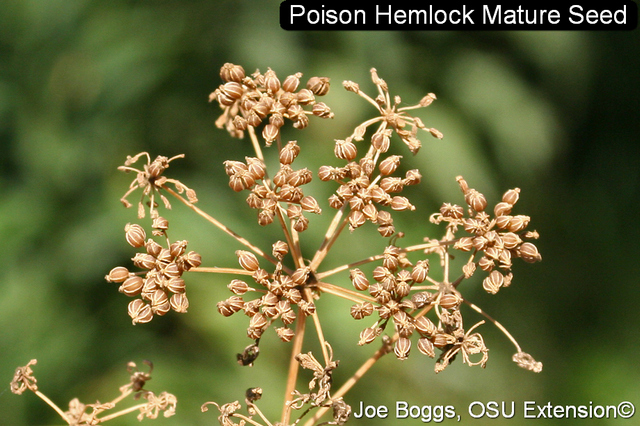 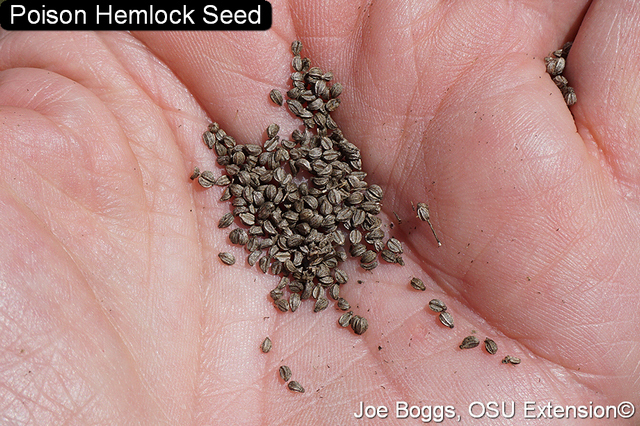 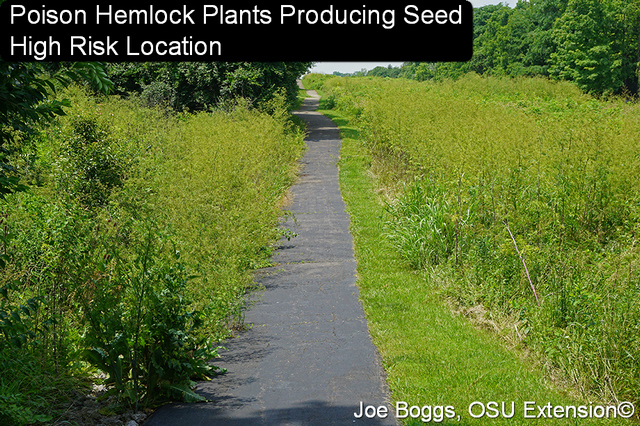 Finally, the literature notes that some plants may occasionally behave as monocarpic perennials spending more than one year in the vegetative stage before flowering once and then dying.  This would help to explain the rapid rise in asynchronous life cycles in developing poison hemlock infestations.

This non-native is one of the deadliest plants found in North America.  It is the plant the Greeks used to kill Socrates as well as the Greek statemen Theramenes and Phocion.  Indeed, the genus name Conium is Greek meaning to spin or whirl, and refers to the symptoms of poison hemlock poisoning.

The toxins must be ingested or enter through the eyes or nasal passages to induce poisoning; they do not cause skin rashes or blistering.  Regardless, this plant should not be handled because sap on the skin can be rubbed into the eyes or accidentally ingested while handling food.  There is also another possible entry point that should be considered relative to initiating certain management options.

Beware of Aerosolized Sap.  A story titled, “Hiding in Plain Sight” published in the “Life + Health” section of Good Housekeeping (April 2022, pgs. 21-25) described a disastrous encounter with poison hemlock last year in southwest Ohio.  In May 2021, a landowner was using an electric chainsaw to cut down large weeds on his property.  Although he didn't know what kind of weeds he was cutting, the large stems provided a clue given that the stems of mature poison hemlock plants can defy string trimmers. 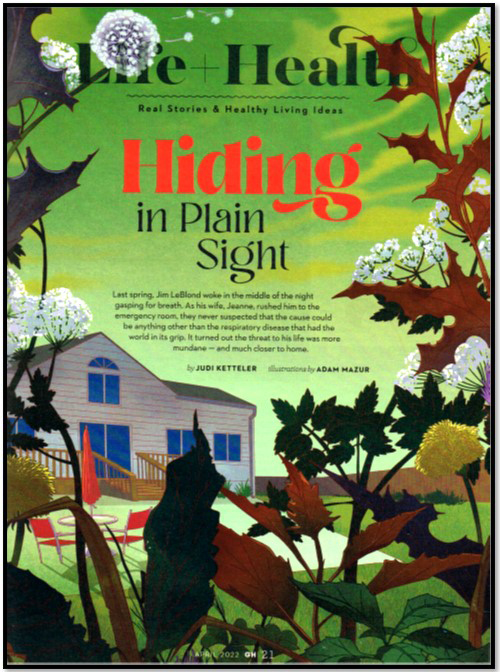 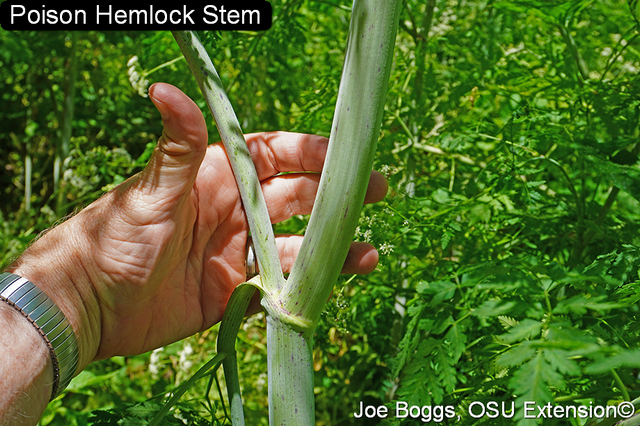 The landowner began to feel ill as he was dragging the cut plants to the curb for municipal curbside pickup.  A short time later, he was having trouble breathing.  Although he was fully vaccinated against COVID-19, he was taken to a hospital emergency room where he tested negative.  However, his symptoms worsened, so he was admitted to the hospital where he was given COVID medication although he kept testing negative.  Various diagnoses were considered and eliminated by his physicians including pneumonia.

Poison hemlock exposure was not considered because the landowner was not familiar with the dangerous plant and the health risks it presented.  He had just been “cutting down weeds.”  The link to his symptoms was eventually made when his daughter showed him images of poison hemlock and he identified it as the weed he was cutting down.  He spent 109 days in the hospital ultimately needing heart surgery.

The plight of the landowner is not proof-positive he had inhaled poison hemlock sap that had been aerosolized by the chainsaw.  The toxins may have found their way into his system via another route.  However, his physicians believe the mode of entry was through inhalation based on the symptoms and the damage to the landowner’s lungs.  Regardless, it’s a cautionary tale that should be considered while weighing management options.

Mow, Pull, or Spray?  Poison hemlock has become too widespread for it to be eradicated in Ohio.  However, infestations that present a clear and present danger to the public or to landowners should be targeted for elimination. 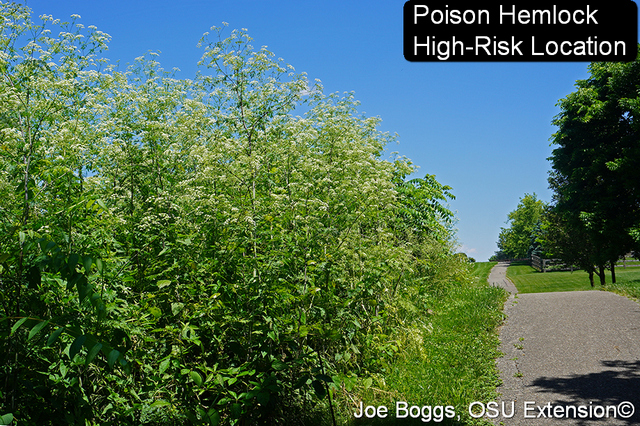 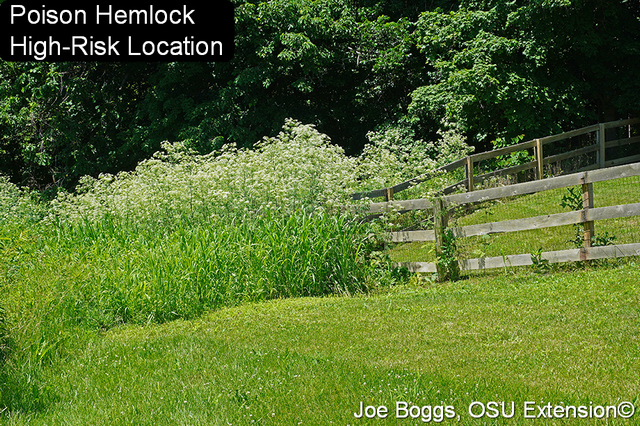 The graphic below shows the biennial poison hemlock life cycle with an arrow pointing to the best time of the year to mow or spray.  Note that management strategies targeting the second year plants after they start bolting may have a limited impact on first year rosettes.  This means poison hemlock infestations are not likely to be eliminated in a single season. 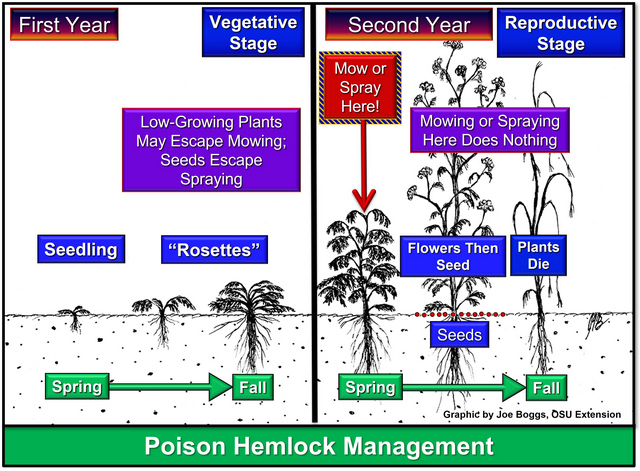 Mowing poison hemlock just after plants begin to bolt but before they bloom can be highly effective.  However, most mowers will pass over the low-growing rosettes and even if they are cut, the plants will produce new stems. 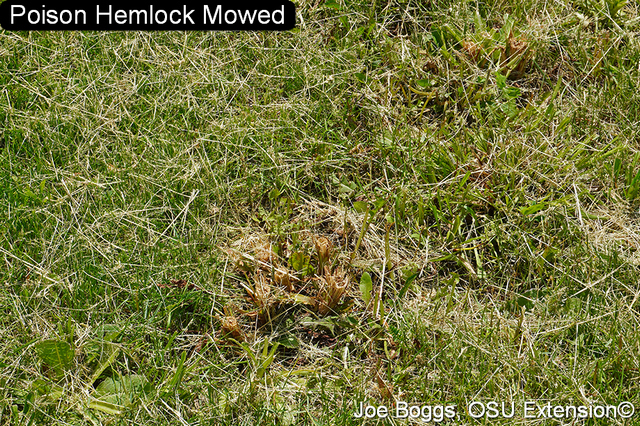 It’s important to note that safety remains a concern with mowing poison hemlock given the possibility of aerosolizing the sap.  Equipment operators should approach mowing large poison hemlock infestations with caution.  Equipment with unshrouded blades should not be used.  PPE should be considered even if brush or flail mowers are shrouded.

Mowing after seeds are produced is a good recipe for spreading poison hemlock.  The small seeds can easily hitchhike on mowing equipment, particularly atop mower decks. Heavy infestations along roadways and within other rights-of-ways provide anecdotal evidence that human-assisted spread has played a significant role in spreading this non-native invasive weed in Ohio.  Mowers should be thoroughly cleaned before moving to new locations if mowing must be done after poison hemlock has produced seeds.

String trimmers and brush saws should not be used.  Both can fling sap and string trimmers are largely ineffective against the stout stems of mature poison hemlock plants.

Hand-pulling poison hemlock plants just after they bolt can be effective on small infestations.  It’s strongly recommended that hands are protected with gloves, arms protected with long sleeves, and eyes protected with safety goggles.  Plants should not be burned but disposed of using a method that provides limited exposure to animals and people.

Given the problematic nature of controlling poison hemlock by physical removal, herbicides may be the safest option.  Fortunately, the non-native weed is susceptible to several selective and non-selective postemergent herbicides. 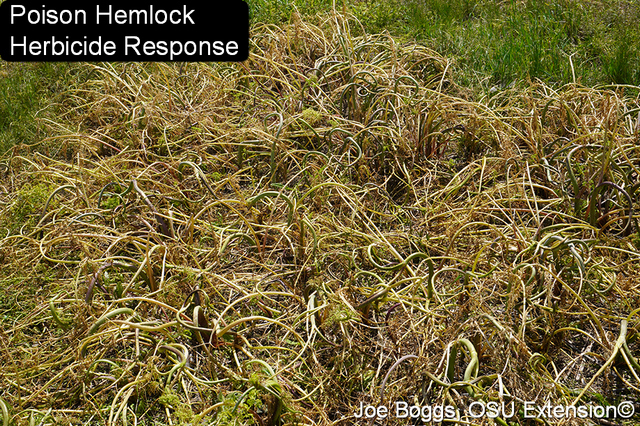 However, keep in mind that non-selective herbicides such as glyphosate (e.g. Roundup) can also illuminate plants that compete with poison hemlock.  Herbicidal openings produced by non-selective herbicides provide perfect opportunities for poison hemlock to spring forth from previously deposited seed.  Thus, it's important to have a plan for establishing competitive plants such as over-seeding with grasses. 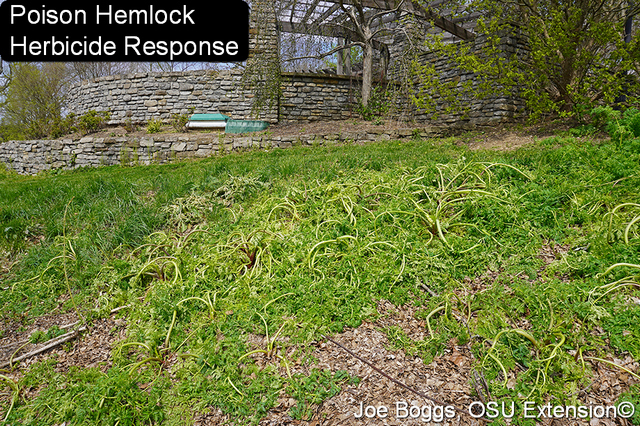 Help From a Little Friend 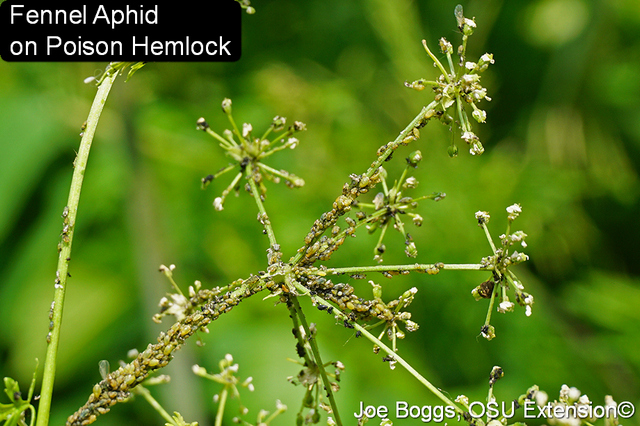 Indeed, I had long believed that one reason poison hemlock has become so widespread in Ohio over such a relatively short period of time is that it had left its enemies behind in its native Europe.  However, this may change.

A few weeks ago, Curtis Young (OSU Extension, Van Wert County) showed pictures during our weekly BYGL Zoom conference of a considerable amount of feeding damage to poison hemlock by the caterpillars of a non-native moth commonly called the Poison Hemlock Moth (Agonopterix alstroemeriana, family Depressariidae). The moth is also known as the Defoliating Hemlock Moth or just Hemlock Moth. 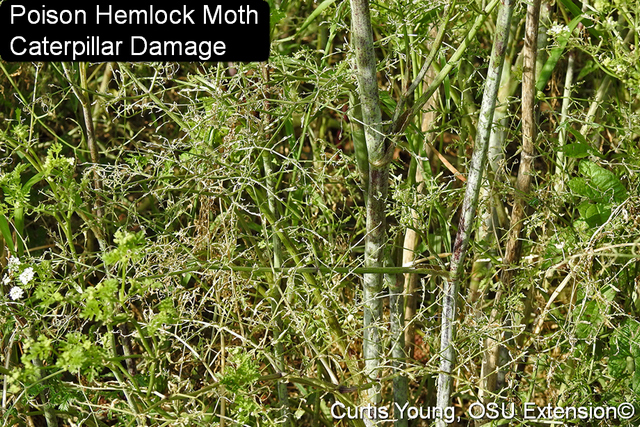 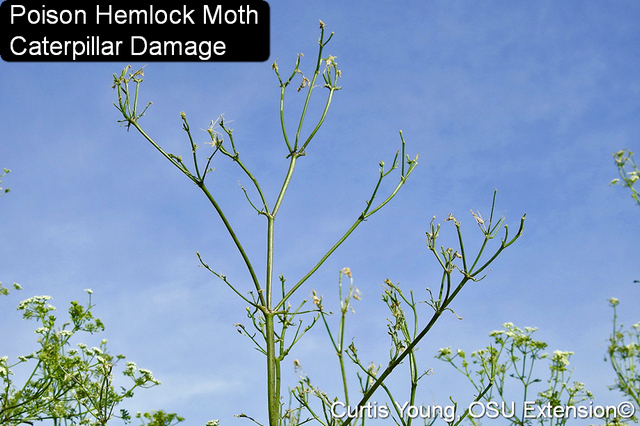 The poison hemlock moth is native to Europe and its caterpillars will only feed on poison hemlock.  The leaf-rolling caterpillars were first observed in the U.S. in 1973 in central New York State.  The moth was found in several western states including California, Colorado, Idaho, Oregon, and Utah in the 1980s.  In the early 90s, it was found in the Midwest including central Illinois and central Ohio. 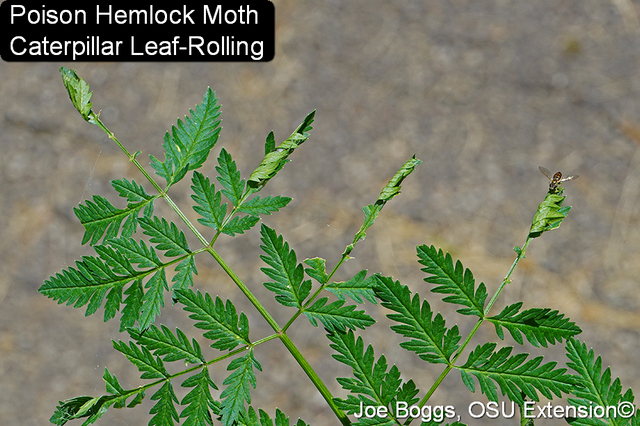 The literature notes that high caterpillar populations can totally destroy the leaves and flowers causing enough damage to eliminate seed production.  It could be a highly effective biological control agent in Ohio.  However, why isn’t it?

Perhaps it’s just a matter of time.  Although I’ve been monitoring and photographing poison hemlock in southwest Ohio since the early 2000s, this is the first season I’ve come across damage caused by poison hemlock caterpillars in my part of the state.  However, Curtis photographed substantial plant injury in the northwest part of the state in 2008 and again this season. 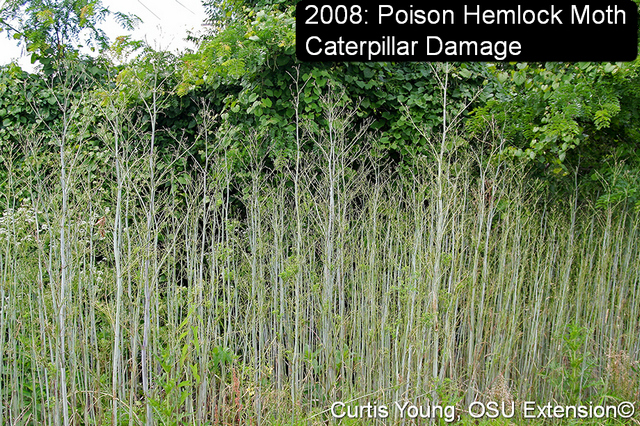 There is a possibility the rapid spread of poison hemlock has simply outpaced the capacity for its caterpillar nemesis to rein in its invasive nature.  Only time will tell.

There’s also the possibility the caterpillars have become targeted by predators and parasitoids.  Research published in 2001 showed that a native solitary wasp, Euodynerus foraminatus (family Eumenidae) had discovered the hemlock moth in east-central Illinois.  The wasp paralyzes caterpillars and uses them to provision their nests.

Finally, the idiom, “more of a curse than a blessing,” may apply to an unintended consequence of herbivory by the poison hemlock moth.  The toxic piperidine alkaloids in poison hemlock are produced to protect plants from being eaten.  They are called secondary metabolites meaning that they don’t play a role in any primary plant physiological processes.

However, secondary metabolites are not synthesized at no cost to the plant.  Plants must dedicate resources to their production at the expense of other enterprises such as shifting the destination of nitrogen within the plant away from supporting growth and development.

Research has shown that poison hemlock plants collected from geographical locations where poison hemlock caterpillars were abundant had much higher alkaloid levels compared to plants collected from locations where the caterpillars were rare.  The researchers found that plants had responded to caterpillar herbivory by dedicating two to four times more nitrogen to the production of protective alkaloids.  In other words, the plants were more toxic.