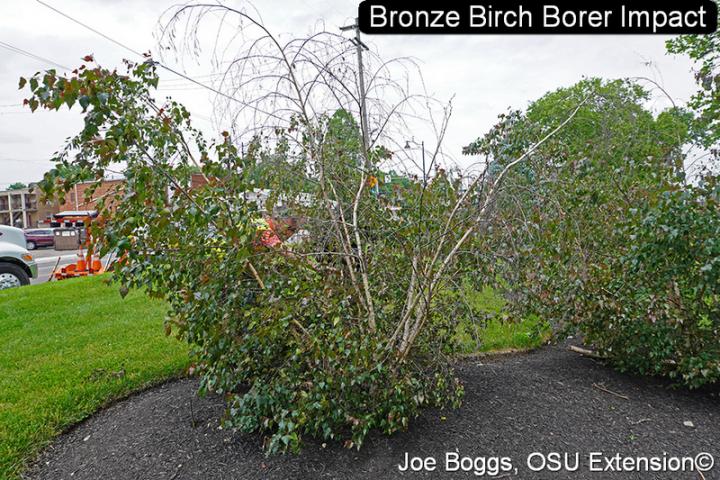 Bronze Birch Borer (BBB) (Agrilus anxius) is native to North America and only targets trees belonging to one genus, Betula.  Historically, BBB ranged across the northern U.S. and southern Canada which is not coincidently the same range as many of our native birches such as paper birch (B. papyrifera) and gray (grey) birch (B. populifolia).

Last week, I visited an urban planting of ‘Crimson Frost’ birch in southwest Ohio.  The birch trees were suffering from heavy annual BBB infestations.  So many main stems had been killed and removed the trees were taking the form of shrub birches.

The infestation surprised me.  The beetle has long been off my radar because it’s been a while since BBB was considered the most significant pest of birch trees in Ohio landscapes.  Of course, the infestation I observed is a reminder that BBB is not gone and should not be forgotten.

BBB belongs to the same genus as Emerald Ash Borer (EAB) (A. planipennis).  The two share many characteristics.  The adult beetles are called metallic wood borers (family Buprestidae) because of their highly reflective dappled coloration.  They look like they are coated with metal flake (polychromatic) paint. 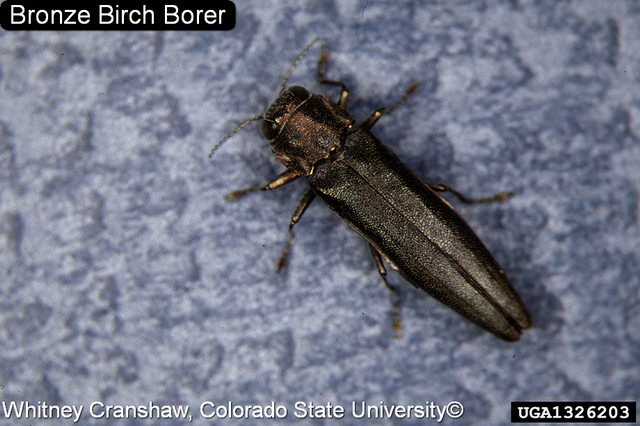 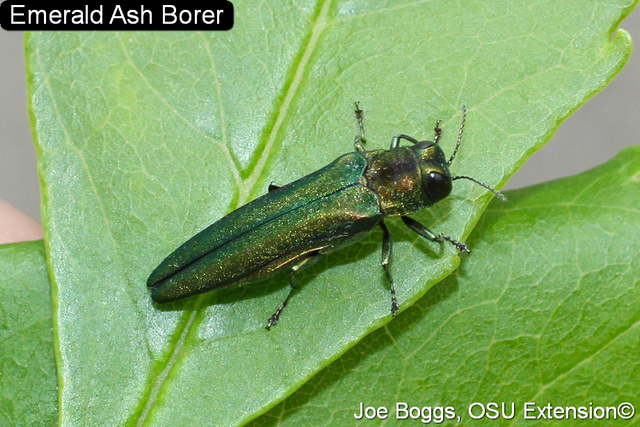 On a side note, I’ve found buprestids to be some of the most difficult insects to accurately photograph.  Their coloration can dramatically change with a slight change in the angle of the light.

When viewed head-on, EAB and BBB adults have flat backs and round bellies.  This means that when they emerge from their trees, they leave behind characteristic D-shaped emergence holes.  This unique shape of the exit holes is shared with many other buprestid beetles. 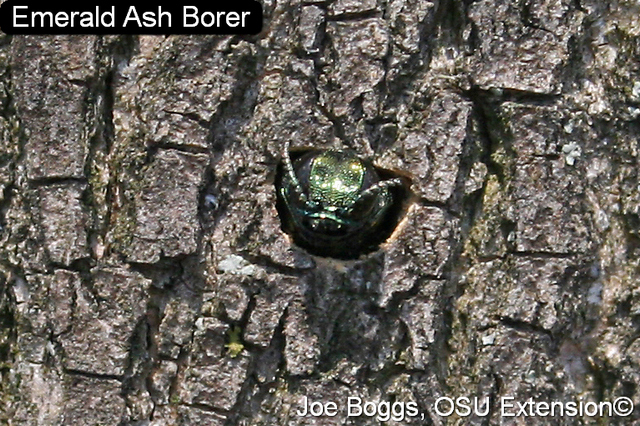 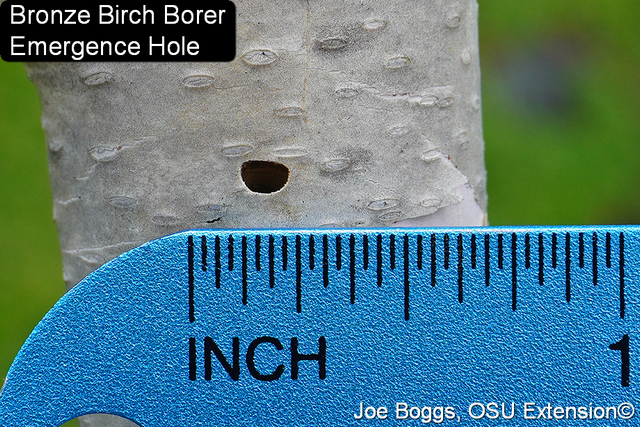 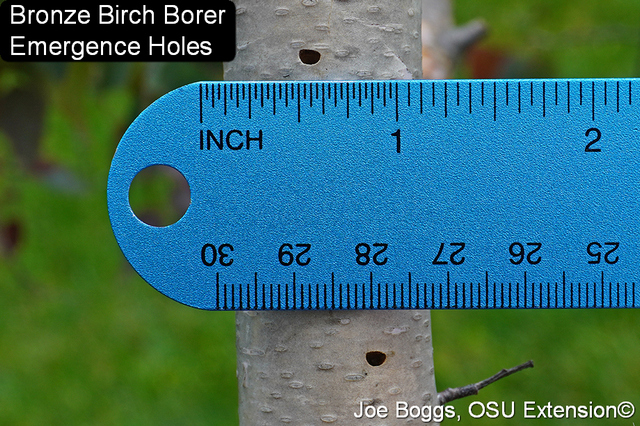 The larvae of buprestids are called flatheaded borers because the first thoracic segment behind the actual head is broadly flattened compared to the rest of the body segments.  The flatheaded larvae of BBB and EAB tunnel through and feed on the phloem located just beneath the bark.  The larvae leave behind galleries that are filled with sawdust-like frass (insect excrement).  As the larvae gain girth, they start destroying the thin ring of cambium beneath the phloem and etch into the first ring of the xylem. 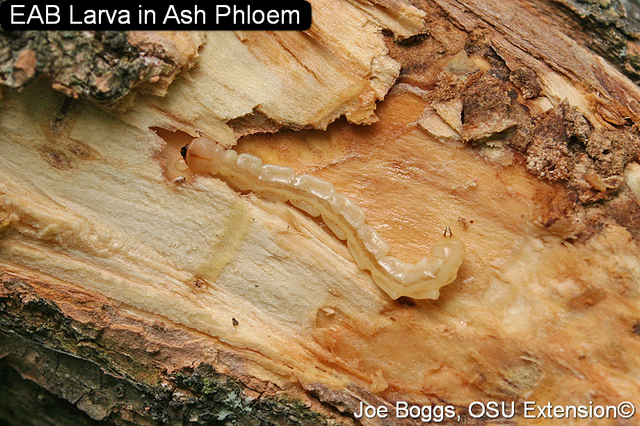 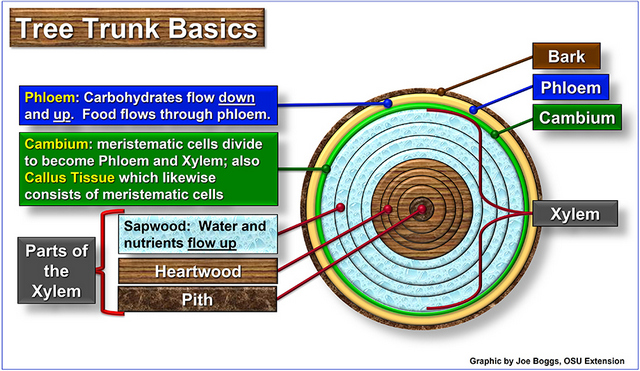 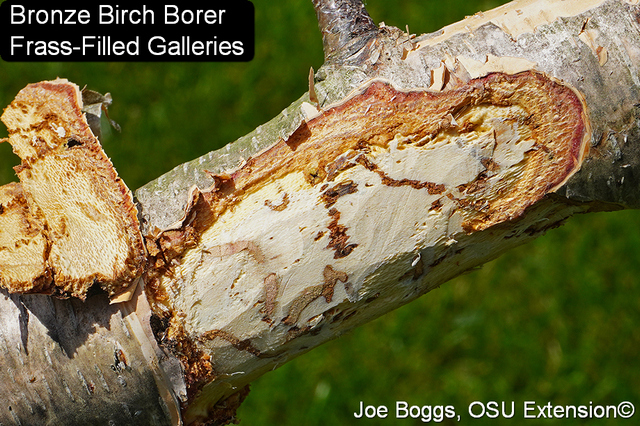 However, the impact of BBB and EAB larvae depends on their hosts.  Ash trees (Fraxinus spp.) are ring porous.  Birch trees are diffuse porous.  These terms refer to the part of the xylem called sapwood that carries water and nutrients up the tree from the roots.  Ash trees only have one functional ring of sapwood whereas birch trees have multiple functional rings of sapwood. 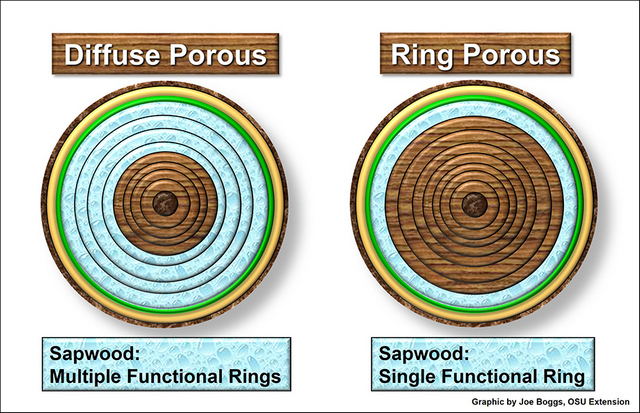 When EAB etches the first ring of the xylem, they are destroying the only functional ring of sapwood.  Their destruction of the phloem which transports carbohydrates up and down the tree coupled with destroying the sapwood means they are wrecking the tree’s “plumbing.”  Symptoms such as canopy thinning, stem dieback, and even tree death occur quickly.

Birch reacts differently to the depredations of BBB.  Although the destruction of the phloem means birch tree stems are eventually girdled, the occurrence of multiple functional rings of xylem means the trees can remain alive much longer.  Although dieback on large stems eventually occurs, there is enough time for multiple co-dominant stems to develop leading to the creation of a “shrub birch.” 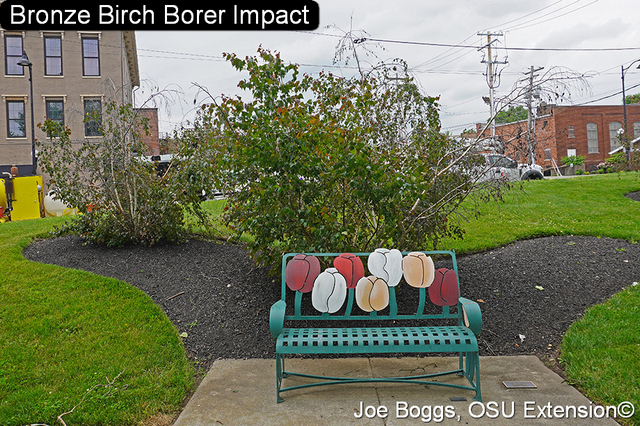 Healthy birch trees even have enough time to mount a modest defense.  The thin cambium ring is comprised of meristematic cells which are like teenagers; they don’t know what they’re going to be until they grow up.  Normally, the cambial cells differentiate into the phloem to the outside and the xylem to the inside.  It’s how trees increase their girth.

However, if the cambium is damaged, the cells respond to the wounding by transforming into so-called callus tissue which also consists of meristematic cells.  The callus tissue cells eventually differentiate into woundwood which has all of the specialized morphological features found in stems including phloem and xylem.  It appears as lip-like tissue along the edges of tree wounds.  As the well-known tree biologist Alex Shigo said, “trees don’t heal, they seal.” 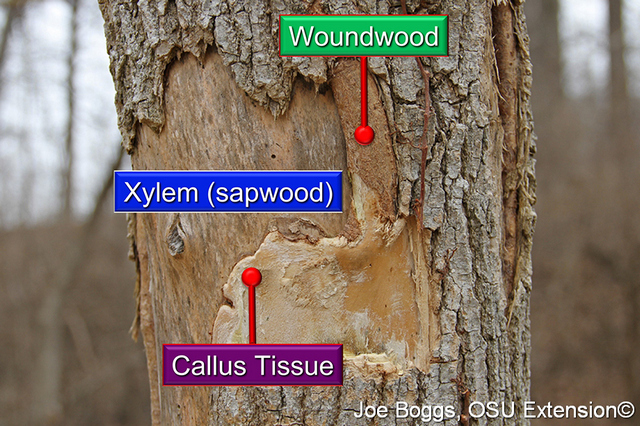 The images below show swelling or bumps on the surface of birch stems produced by the swollen woundwood beneath the bark.  It’s a telltale symptom of BBB activity. 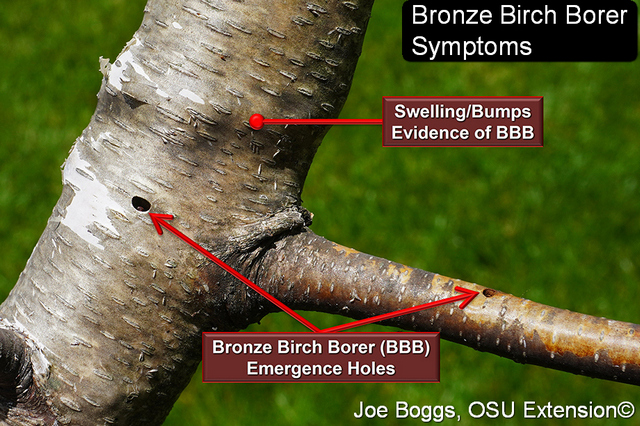 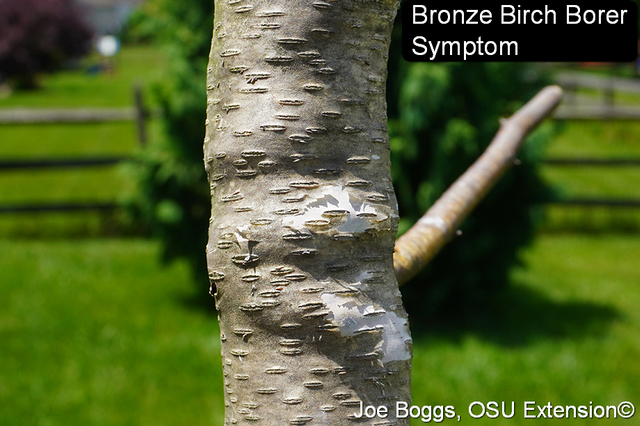 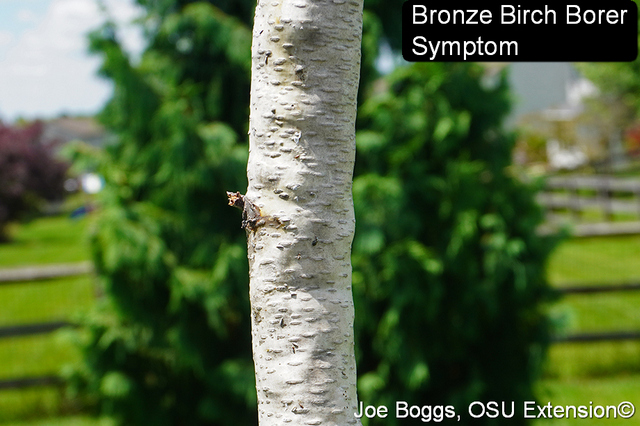 The images below show what’s happening beneath the swelling with the BBB larval tunnels surrounded by callus tissue.  Occasionally, the growth of the callus tissue is so aggressive it kills the BBB larvae by squeezing them to death. 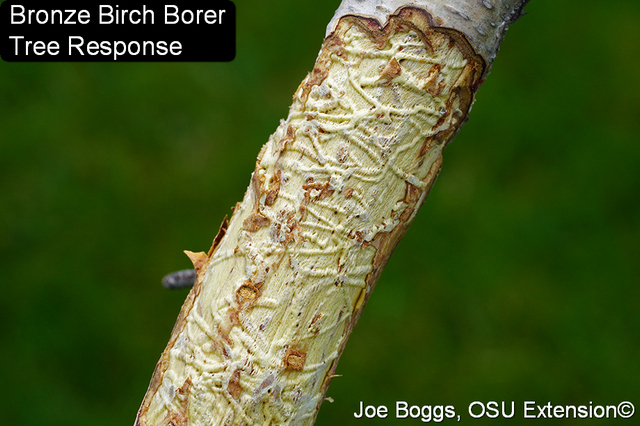 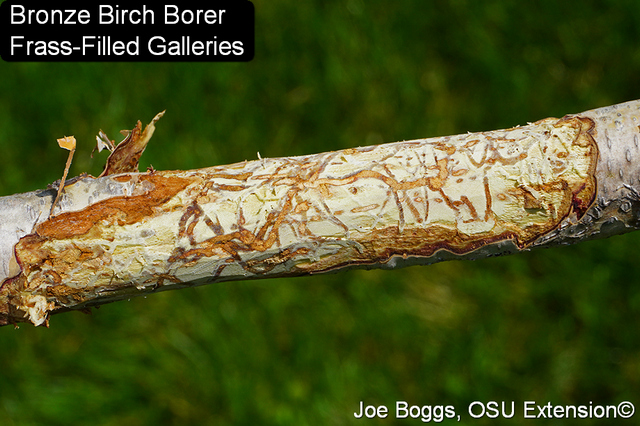 BBB usually produces one generation per season.  However, occasionally, they require two years to develop from eggs to new adults.

On a final note, don’t be fooled by horizontal or vertical rows of holes produced by a Yellow-Bellied Sapsucker (Sphyrapicus varius).  Borers never leave behind such an orderly pattern of adult emergence holes. 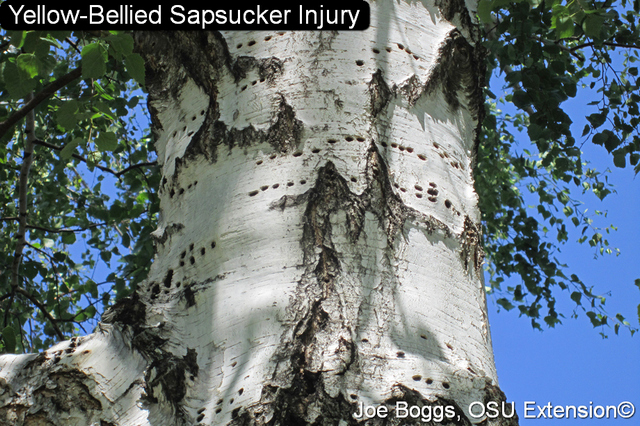 The Hosts with the Most

Research conducted at OSU and elsewhere showed that all birches are not equal when it comes to BBB.  Our native birch trees co-evolved with BBB and vice versa, so natural selection favored native trees that have a defense against BBB.  Conversely, birch species that evolved in Europe and Asia are BBB fodder in North America because natural selection never advanced defense mechanisms against BBB. 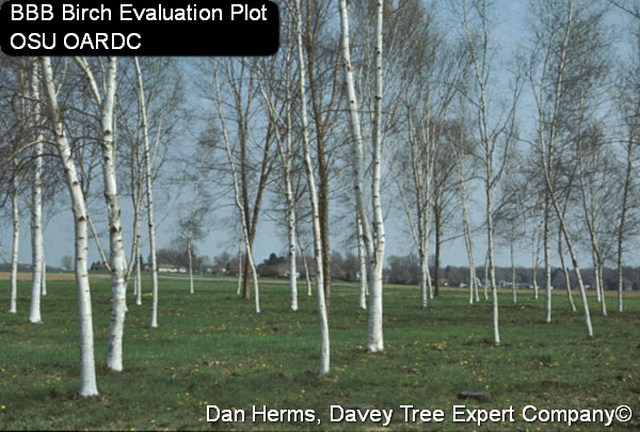 Unfortunately, we provided a BBB banquet by planting exotic birches in North American landscapes.  These included European white birch (B. pendula), Downy birch (B. pubescens), Monarch birch (B. maximowicziana), and Szechuan birch (B. szechuanica), to name just a few, as well as many hybrids with European and Asian genes. 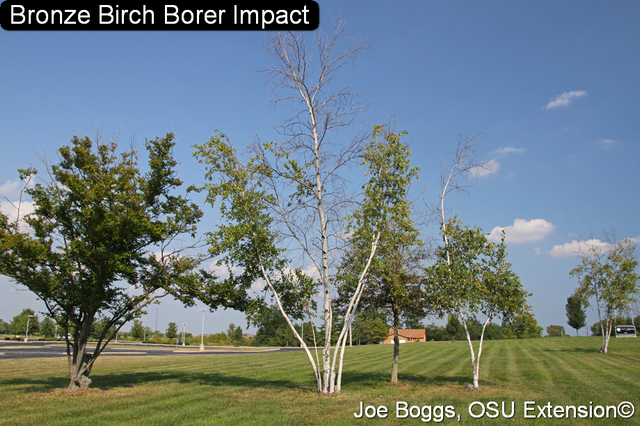 Of course, BBB isn’t the only borer that attacks birch trees.  As BBB begins to kill trees, other borers are drawn to the dying and dead stems.  The images below show evidence of accessory-after-the-fact with round emergence holes and tunnels with frass inside the xylem.  BBB does not tunnel to feed in the xylem. 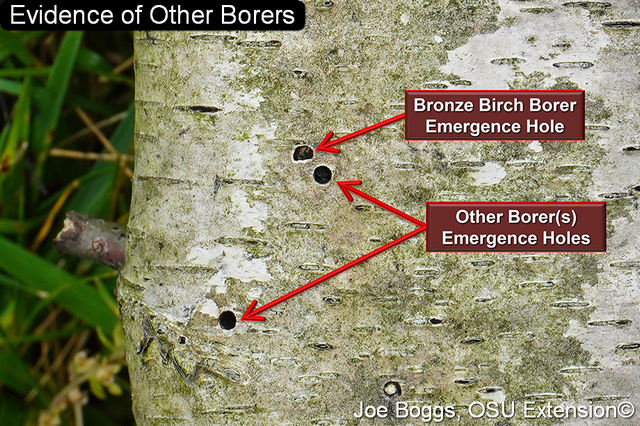 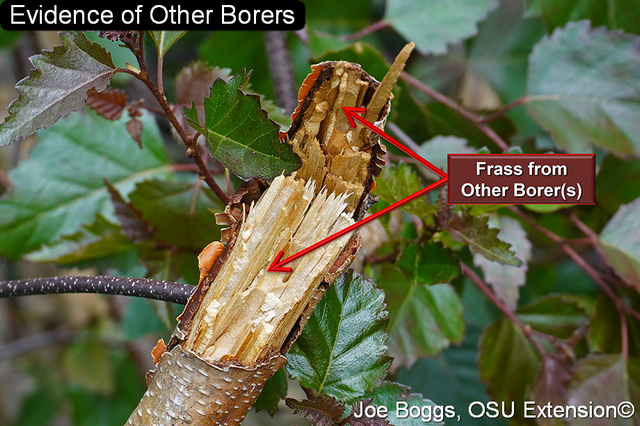 Co-evolution with BBB does not completely remove our native birches from the BBB birch buffet.  Scientific publications documented historical BBB outbreaks on native paper birch (B. papyrifera) and gray (grey) birch (B. populifolia) as well as a few others in several upper Midwest states as well as in Canada.  However, the outbreaks occurred on trees that were stressed primarily by drought.

BBB takes advantage of weakened native trees that have dropped their defense.  From an ecological perspective, it’s a bit like lions culling wildebeests on the Serengeti.  A healthy mature wildebeest is no push-over.  In essence, the borers are serving as the first step in the tree decomposition process on the way to nutrient recycling in forest ecosystems.

To further drive the point home, consider what happened when the non-native EAB encountered our native ash trees.  Tree health didn’t seem to matter.  The beetle and the trees didn’t co-evolve so natural selection never favored our native ash trees with a defense against EAB.  There were no tree defense mechanisms to lose through tree stress.

What about river birch (B. nigra)?  The historical range of BBB largely did not extend into the native range of river birch, so the two species did not co-evolve.  It would be reasonable to assume this means river birch has no defense against BBB.  In fact, river birch doesn’t need a defense.  The chemical profile of river birch is so different from other birches, BBB doesn’t recognize the native tree as a potential host.  In the compound eyes of BBB, river birch might as well be an oak or maple.

Thanks to the practical scientific investigations on BBB conducted from the early 80s throughout the early 2000s, host selection became a highly effective focal point for managing BBB.  Continuing to plant exotic birch species meant that a constant resource was being provided for BBB leading to an ongoing reservoir of beetles to quickly infest more exotic birch trees. 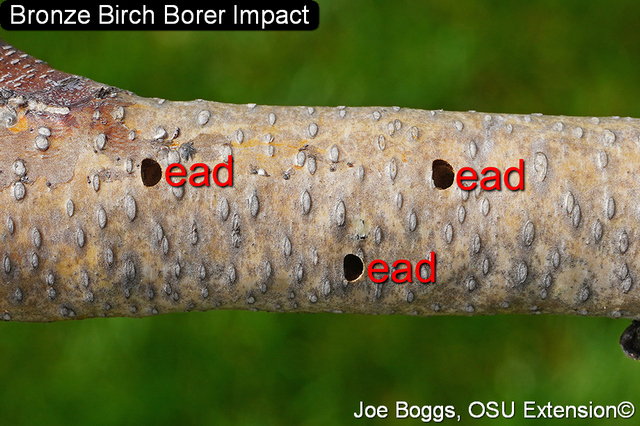 Based on science, we largely stopped planting highly susceptible exotic birch hosts.  Indeed, I believe this effort has played a major role in BBB dropping off everyone's list of the most significant pests of birch in Ohio.

Our plant selection and production community developed native white-barked birches to replace the non-natives.  Michael Dirr and Keith Warren list several B. papyrifera cultivars in their “The Tree Book” that are also more drought tolerant than the straight species meaning these native trees are less susceptible to their native nemesis.

However, as Yogi Berra quipped, "It ain't over till it's over."  Although BBB has largely dropped off our radar, the beetle remains a threat.  My observation last week of the heavy BBB infestation on a non-native birch brought another Yogi-ism to mind:  "It's like deja-vu all over again."