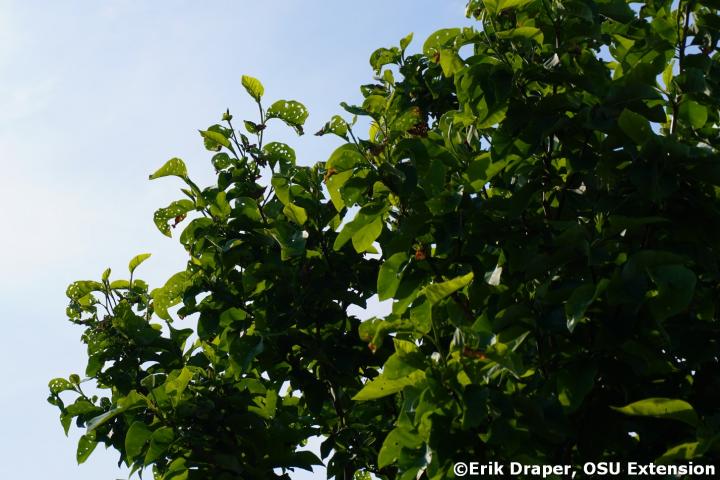 I enjoy sitting out on the deck just absorbing the sunshine, watching leaves flutter on my wife’s favorite magnolia, Magnolia X brooklynensis 'Yellow Bird'.  This deciduous tree has an upright, pyramidal form with beautiful three inches high, vase-shaped blooms with butter-yellow petals, which emerge in late spring.  The large elliptical-shaped leaves are 4-8 inches long and 4-6 inches wide.  Suddenly, I was struck by the thought… Hey, just a minute, I can see blue sky through the leaves!  What the heck is going on here?

Because it is a prized plant in the Drapescape, I tend to keep a watchful eye on its performance, so I meandered over to the Magnolia to see what was creating holey havoc with the leaves.  I carefully noted the appearance, size and possible patterns of holes in the leaves and the overall damage.  While some leaf holes were kidney bean-shaped, others appeared to be almost round.  The holes are randomly scattered across some leaves, yet other leaves are absolutely riddled with holes.  There are no readily discernible, consistent patterns or site placements for the holes in the leaves.  Some of the holes were made earlier in the season as evidenced by the edges of the holes being completely healed over; while comparatively, other holes were freshly created because the leaf tissue still had open, raw wounds.

These holey magnolia leaves are the result of feeding by the Yellow Poplar Weevil (YPW), Odontopus calceatus, also known as sassafras or magnolia weevils.  Depending upon when adults feed on the leaf, the holes may be small, due to direct feeding damage in mature leaves; contrastingly, holes can be quite large, if adults fed on young, rapidly expanding leaves.  These small, black to brownish, adult snout beetles will feed on and damage hosts such tulip poplar (yellow poplar), sassafras, and magnolia.

Joe Boggs reported an outbreak of YPW on tuliptrees in Southern Ohio in 2018 and Joe noted the following, “YPW have one generation per year; however, adults feed twice during the growing season.  Adults spend the winter in protected sites such as the duff beneath trees.  They emerge in the spring to feed, mate, and lay eggs in leaf midribs.  This is the so-called "spring generation" of adults.  The "summer generation" arises from the leafmining larvae.  There are typically a greater number of adults in this generation compared to the spring generation meaning that most of the damage is done in early to mid-summer.  Although yellow poplar weevils are finished feeding in central Ohio, the damage will remain evident throughout the season.”

It appears that we are seeing the “spring generation” in NE Ohio which feed on the leaves, mate, and then lay eggs in leaf midribs.  I have other types of magnolias scattered in the Drapescape, like Sweetbay Magnolia (Magnolia virginiana) and ‘Ann’ ‘Betty’ and ‘Jane’ of the Little Girl Magnolias.  Interestingly enough, none of these smaller leafed species of magnolias, at least right now, show any evidence of YPW feeding at all!!  It is limited to the large leaf species that are being damaged by the YPW.

Incidentally, in that same article, Joe mentions another insect that he was surprised to see, that is also creating havoc on the ‘Yellow Bird’ magnolia leaves.  The Magnolia Serpentine Leafmining Caterpillar (Phyllocnistis magnoliella) produces a unique “silvery snaking handiwork” of feeding trails swirling and crisscrossing the leaf.  The larva of this moth is a leafmining caterpillar which feeds close to the upper epidermis of the leaf, resulting in the silver-like mines or feeding trails left on the leaf.  Little is known about the life cycle of this moth and as with most leafminers, control is not practical because the insect is protected within the leaf.