Common Milkweed and its Doppelgänger 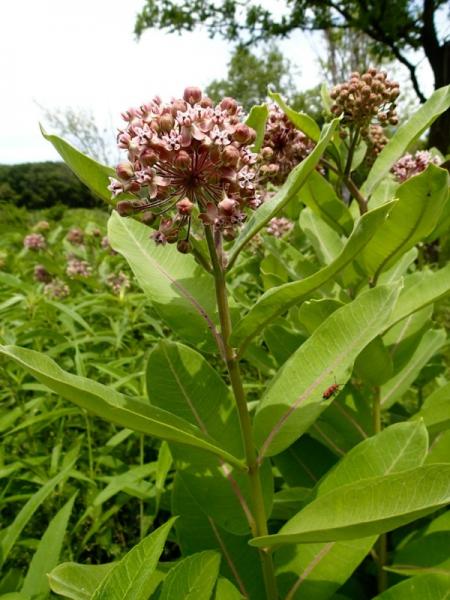 This can be a particularly tough time of the year to learn plant identification. With the warm temperatures and plentiful rainfall, vegetative growth is rapid, and we’re often left looking at a wall of green on green (on green).

A common mistake is the misidentification of common milkweed (Asclepias syriaca) and dogbane (Apocynum cannabinum).

This is an honest mix up, especially in the spring when both species are barraging through the soil’s surface. Unless one is close enough to see the fine hair on the milkweed leaves, I admit that it can be a bit of a crap shoot.

As they continue their growth into the summer, the differences between common milkweed and dogbane become more obvious. Common milkweed’s pink flowers are found in dense, ball-like clusters and can consist of up to 120 flowers. Dogbane flower clusters are typically smaller and consist of small white flowers.

By late fall, there is no mistaking which species is which, as the flowers and seed pods of the two species are distinctly different. While dogbane seedpods are long, slender, and usually occur in pairs, those of common milkweed are 3-5” long and quite plump in comparison.

Of course, commonalities exist between common milkweed and dogbane, the first of which is genetics! Both species belong to the Apocynaceae family and have relatives all over the world! Members of this family are native to places as far away as Africa, Australia and even have strong representation in the tropics. Within this family, common milkweed (and the other species in the Asclepias genus) belong to a subfamily called Asclepiadaceae.

Both species have creeping roots and use these underground runners to establish new territory. Additionally, both milkweed and dogbane exude a milky substance called cardenolides when the surface of the plant is damaged. This compound evolved as a defense mechanism against herbivory and is toxic to you and me (and most other species, including livestock). However, there are always exceptions to the rules of nature and in this case that exception includes the larvae of Monarch butterflies. Not only can this species withstand specific amounts of the compound, it actually utilizes it as a part of its own defense mechanism, making it toxic and bitter to predators. Other insects such as milkweed bugs and tussock moths, also use this same trick.  (Nature rules!)

Both species have leaves that are arranged opposite of one another on the stem and can grow to be similar heights, typically 3-5’ tall.

Finally, it’s important to note that Ohio has many other species in each genus mentioned above. For instance, there are at least a dozen other species of milkweed, including the bright and showy butterfly milkweed (Asclepias tuberosa) that is often coveted by gardeners.