Stranger Things in the Woods 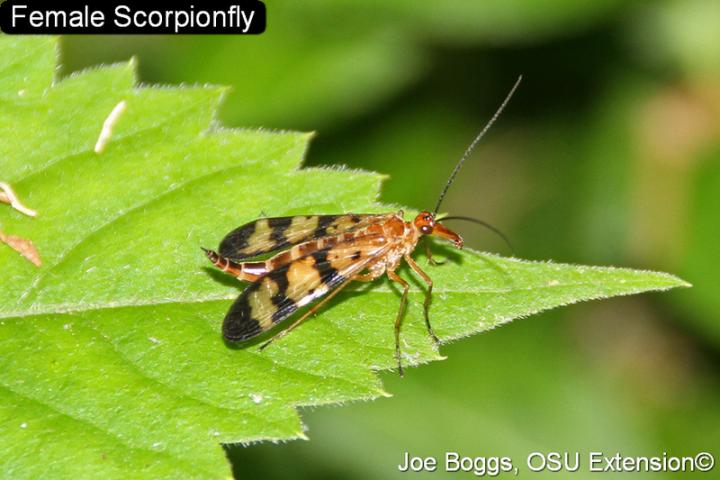 The name “scorpionfly” sounds like a dangerous combination.  Like some freakish creature buzzing out of the Upside Down or lurking in a Jurassic dominion.  Of course, scorpionflies aren’t flies with scorpion stingers just like pineapples aren’t apples growing on pines.  The contractions tell a story; pineapples were so named because they resemble pine cones.

Flies belong to the insect order Diptera (di=two; ptera=wing).  Flies have two wings and their common names are written as two words:  snipe fly, hover fly, house fly, horse fly, etc.  The common names for insects that fly but are not Dipterans – they have four wings – are written as contractions:  butterfly, whitefly, sawfly, etc., and of course, scorpionfly.  I believe shoofly pie fits the rule but I need to do more hands-on investigating.

Scorpionflies belong to the order Mecoptera (meco=long).  They have four long wings.  Male scorpionflies have external genitalia at the end of their abdomen that resembles the stingers of scorpions.  Scorpionfly adults feed on nectar and dead organic matter such as dead insects; however, some will also behave as predators by chowing down on living insects.   These unusual-looking insects commonly hang out on low-growing vegetation along the edges of woods often near streams. 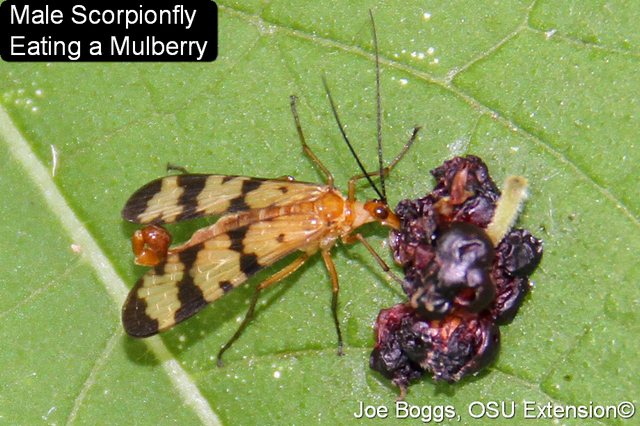 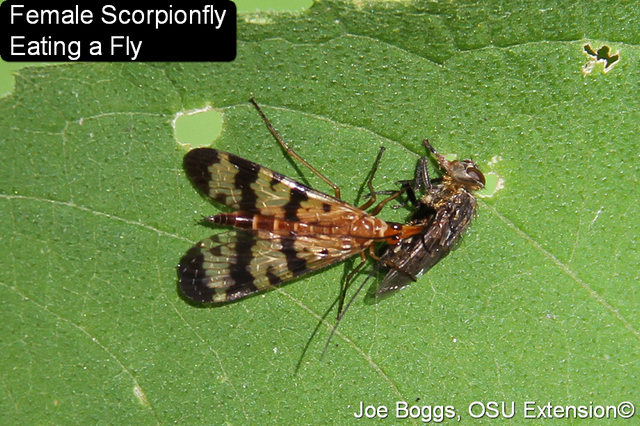 The name “snipe” invokes a mythical forest creature that's only ever been seen by summer camp counselors and older siblings.  However, I’m referring to an authentic creature known as the Golden-Backed Snipe Fly (Chrysopilus thoracicus, family Rhagionidae).  You may be rewarded on your snip hunt by looking in the same locations where you find scorpionflies. 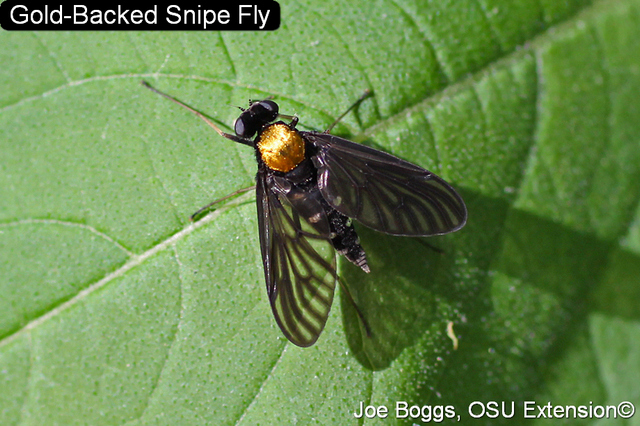 The "golden-backed" in the common name refers to the highly reflective golden hairs covering the top of the thorax.  Its scientific name also describes this striking feature:  "Chrysopilus" means "golden hair" and thoracicus refers to the thorax.  The eye-catching spot-of-gold marking is framed by smoky wings with dark veins. 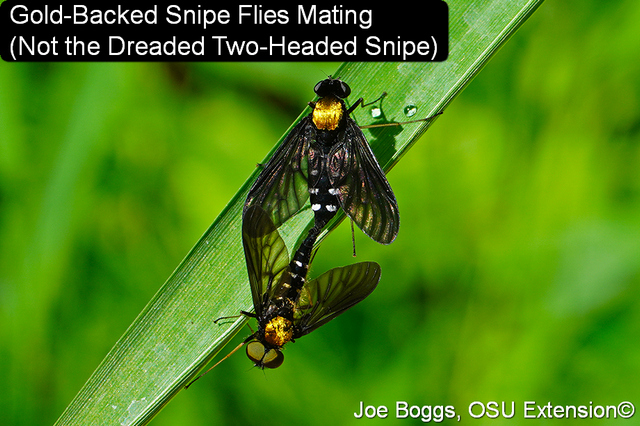 Little is known about this native fly's life cycle and lifestyle.  Its most often observed in the forests of the eastern U.S. and appears to have one generation per season with peak numbers occurring in late May to early June.

The "snipe" in the common name is shared by all flies belonging to Rhagionidae family.  It's not a large family with only 16 genera worldwide.  The adults of most species are predators that use specialized piercing-sucking mouthparts to suck the life out of insect victims; they snipe other insects.

However, a predatory lifestyle has never been proven for Chrysopilus thoracicus.  In fact, adults have been observed visiting the flowers of several native plants, including elderberry, fueling the speculation that they are feeding on nectar and/or pollen.  Of course, maybe they wash down their meat meals with a little nectar?

It is known that the larvae (maggots) live in the soil, but exactly what they do there isn't firmly known.  Some observations suggest the maggots consume decaying organic matter while other reports indicate they opportunistically feed as predators on soft-bodied insects.  Again, nothing has been proven.

The golden-backed snipe fly proves that snipe hunting is not a futile exercise; however, there is much about this fly that remains unknown.  Paraphrasing Churchill, it's a riddle, wrapped in a mystery, inside an enigma.  Not a bad description for the mythical nocturnal forest creature that shares its common name.

As you’re hiking on forest trails in Ohio, look down occasionally and you may spot an emerald-green Six-Spotted Tiger Beetle (Cicindela sexguttata, family Carabidae).  The tigers have a curious affinity for zipping around on woodland trails; large numbers can certainly liven up a hike. 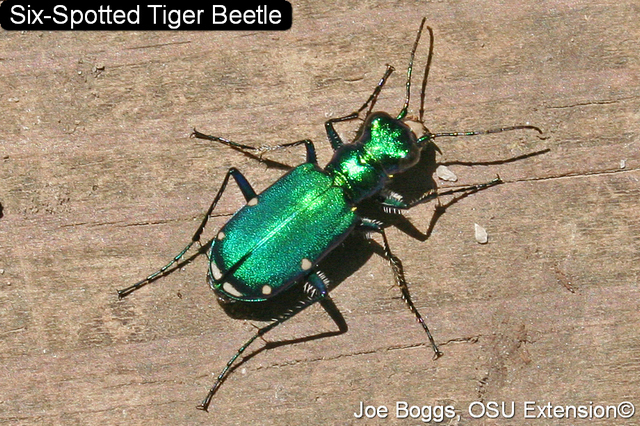 Both the common and scientific names for six-spotted tiger beetles are very descriptive.  "Cicindela" in Latin means "glowworm" and refers to flashes of sunlight bouncing off the beetle's highly reflective surfaces.  The specific epithet "sexguttata" joins the Latin for six (as in sextuplets) with the Latin guttata which means spotted, or speckled.  The spots on the six-spotted tiger beetle are arranged along the trailing edge of the wing covers, three spots per side. 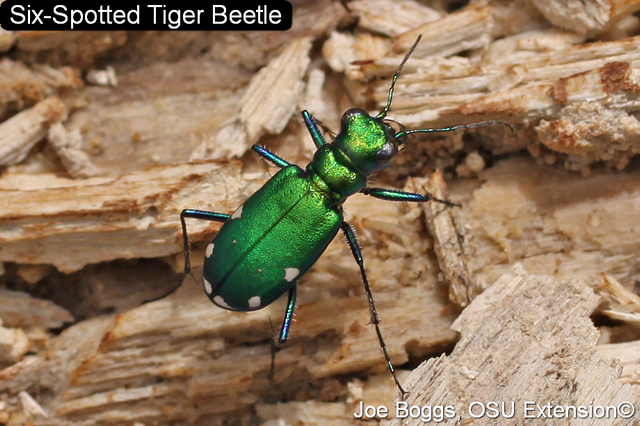 Tiger beetles behave exactly like their larger feline namesake.  They hunt, kill, and eat their arthropod prey.  If you can get close enough, you'll see powerful sickle-shaped mandibles that are used to grab and dispatch luckless arthropod victims.  A word of caution:  these carnivores can also use their impressive mandibles to deliver a painful bite to the hand of the overly curious. 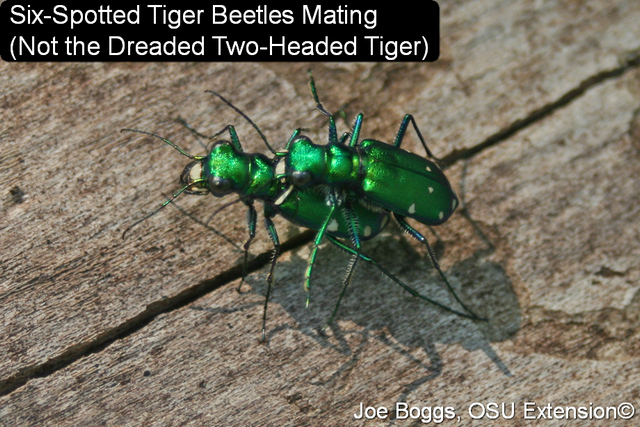 Six-spotted tiger beetles appear as temperatures warm in early spring and they remain active until early-to-mid summer.  After that, you'd need to dig into forest soils to find the larvae which are also predators.  However, instead of actively hunting their prey, they conceal themselves in vertical burrows in the soil to await hapless victims.  When a meat item such as insects or spiders walks past, the tiger larva springs forth like a jack-in-the-box to grab dinner with their powerful mandibles.

The bottom line is that six-spotted tiger beetles are highly effective and important predators throughout their life cycle.  So, keep your eyes peeled for and hands away from these tiny tigers prowling our woodland trails.