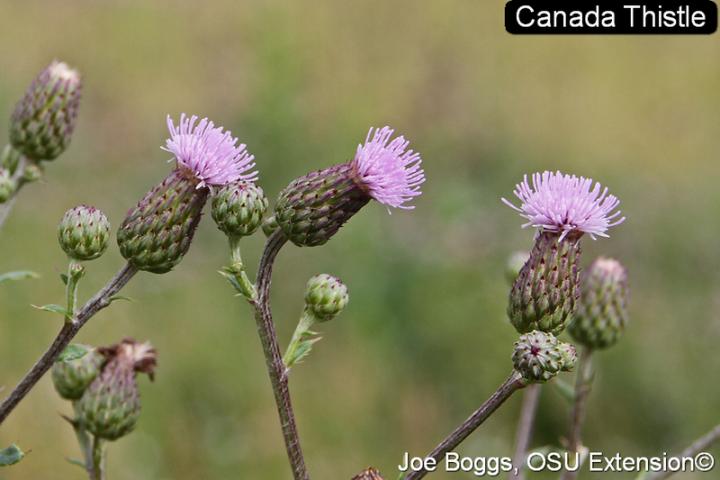 Canada Thistle (Cirsium arvense) is not Canadian.  It’s native to southeastern Europe.  Exactly how it got to North America is not known but our friends up north got blamed even though there’s evidence it arrived in the U.S. and Canada at around the same time.  Thankfully, Ohioans weren’t involved in the name game; it could have been called “Michigan thistle.” 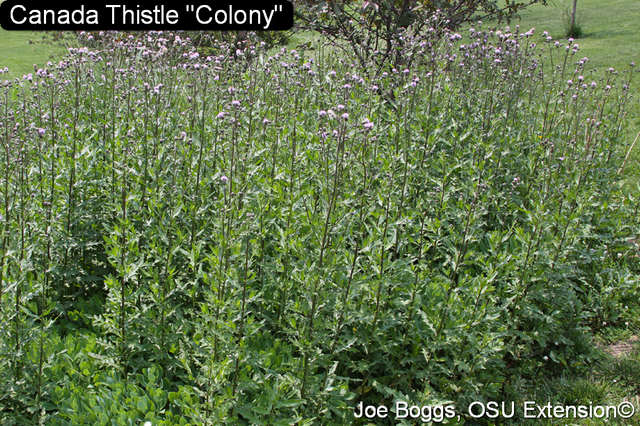 Canada thistle remains a stubborn invasive weed despite having so many things working against it from ghostly bleached-out foliage to holey leaves to flower heads invaded by a weevil.  Why is this?  The answer, my friend, is blowin' in the wind.

Canada thistle can reproduce and spread via underground stems called rhizomes; however, it’s also a prolific seed producer.  Various online university and government-based resources report that seed production ranges from around 1,500 to over 5,000 seeds per plant with seeds remaining viable for over 20 years.  So, thistle's ability to re-seed can overcome just about any thistle calamity. 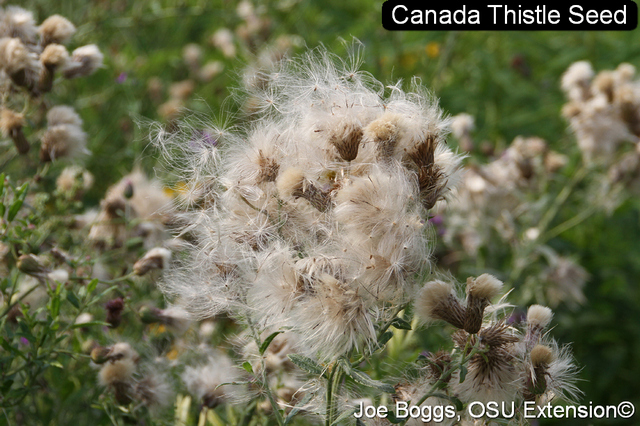 Ghosts in the Mist

The bacterium Pseudomonas syringae pv. tagetis (PST) is causing the tops of infected plants in southwest Ohio to look like they were dipped in bleach.  PST produces a chemical called tagetitoxin which is an RNA polymerase III inhibitor that blocks the production of chloroplasts. 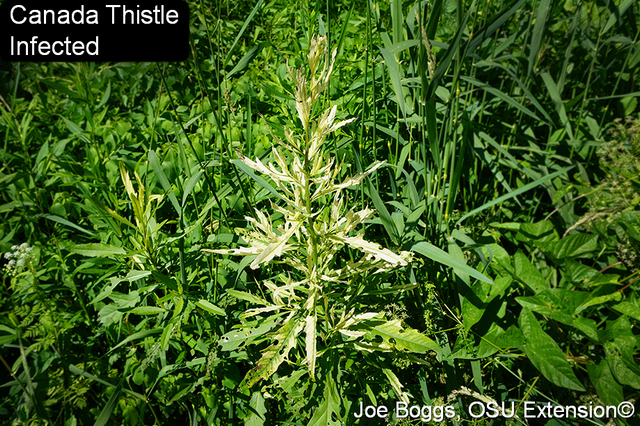 PST infections will not only produce chlorotic stems and foliage, but they will also reduce seedhead production and can occasionally cause plant mortality.  The bacterium received a great deal of research attention in the early 2000s as a possible biocontrol agent for Canada thistle. 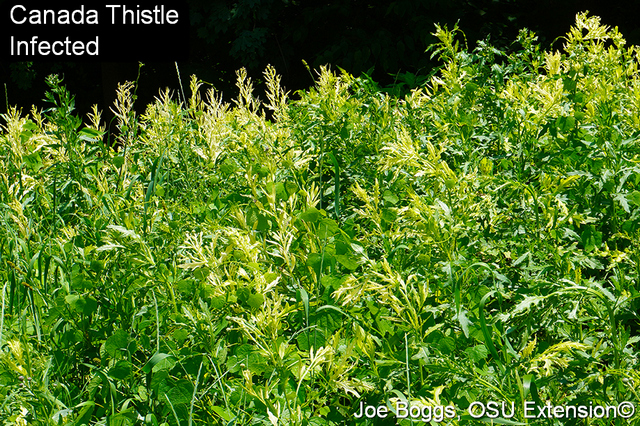 The annual holey-handiwork of the Thistle Tortoise Beetle (Cassida rubiginosa, family Chrysomelidae) is also appearing on Canada thistle plant in southwest Ohio.  Both the adults and larvae chew multiple holes in leaves to produce see-through leaves. 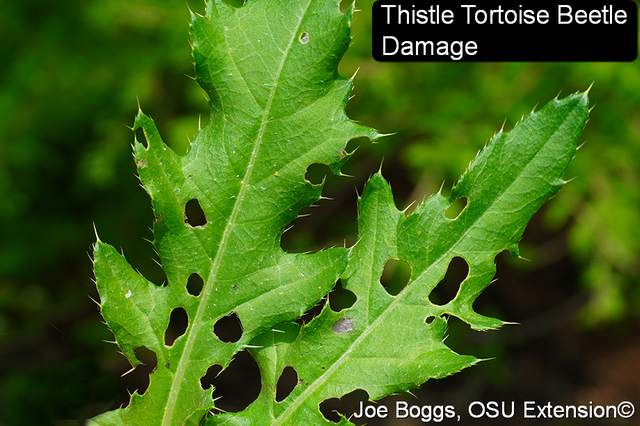 The beetles are pale green or yellowish-green which allows them to blend with their host's leaves.  Like other tortoise beetles, the adults have a body shaped like a flattened pith helmet.  The head and legs of the adults are typically hidden under the flares of their helmet-like bodies.  The antennae can be hidden or extended out from underneath the front of the beetle. 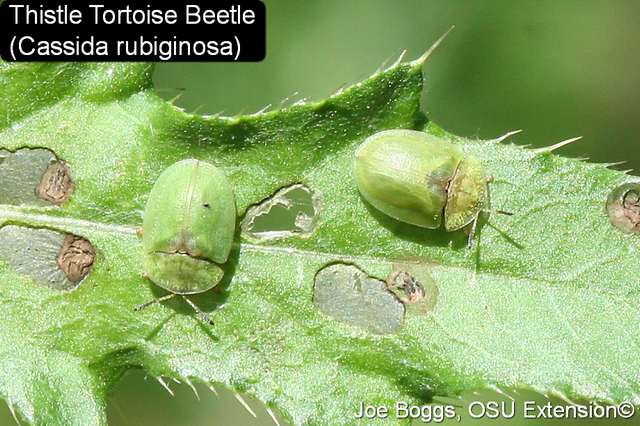 The oval-shaped larvae have a ring of spines arranged crown-like around the edge of their bodies.  The larvae sport a pair of spike-like appendages (cerci) at the tip of their abdomen which they use to spear and carry an odious collection of feces and shed exoskeletons in an umbrella-like fashion over their bodies, presumably for protection against predators. 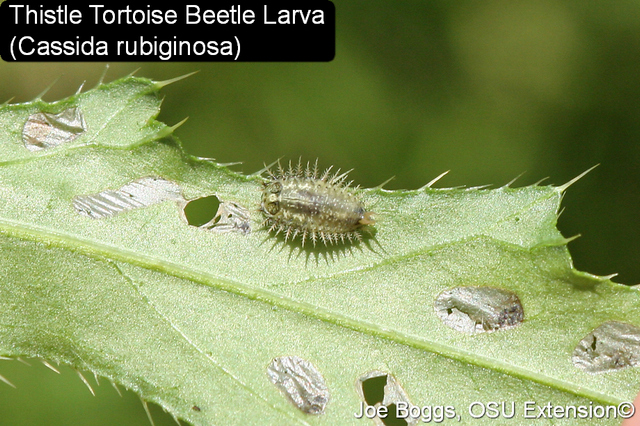 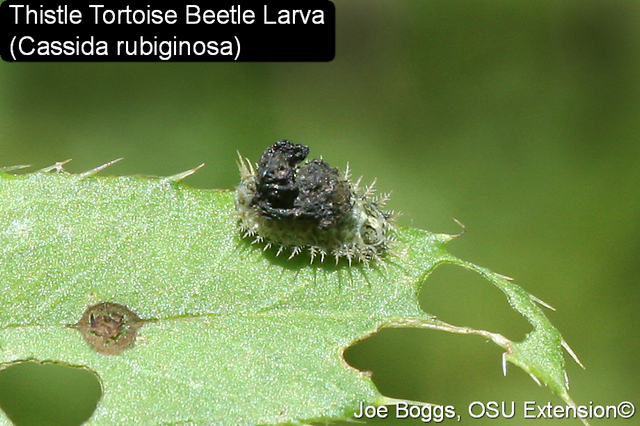 This weed-whacking beetle was intentionally imported from Europe and northern Asia into North America as a biological control for thistle.  The beetle is also known as the "thistle defoliating beetle" and it feeds on other non-native thistle-nasties including musk thistle (Carduus nutans) and plumeless thistle (Carduus acanthoides) thistles.  Unfortunately, the efforts of the beetles to eliminate Canada thistle are commonly thwarted by the weed’s reproductive capacity.

I recently took pictures of another non-native beetle imported into the U.S. in an effort put the kibosh on non-native thistles.  The so-called Thistle Head Weevil (Rhinocyllus conicus, family Curculionidae) is native to southern and central Europe, North Africa, and western Asia.  It was first released in Canada in 1968 (uh-oh!) followed by releases in several U.S. states in 1969.  The primary target was musk thistle, but it also has a liking for Canada thistle. 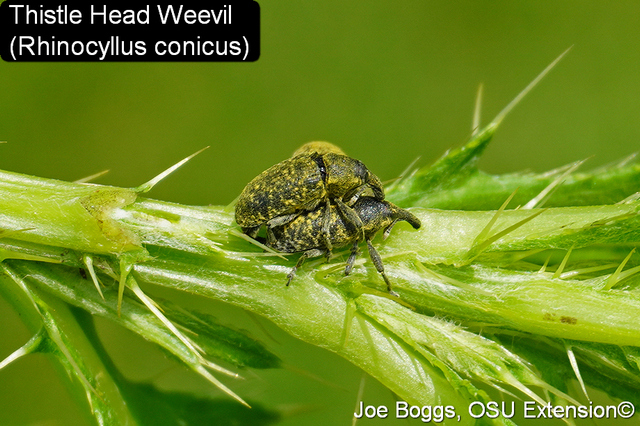 The females lay eggs in the bracts of thistle flower buds and the resulting weevil larvae bore into the flower head where they feed on the flower parts.  The damage stimulates thistles to produce a gall-like structure that surrounds the weevil larvae and provides more weevil fodder.

The initial results after the first round of weevils were released looked promising with musk thistle stands reduced by 80 – 90% where the weevils became established.  The data was used to justify more weevil releases in North America. 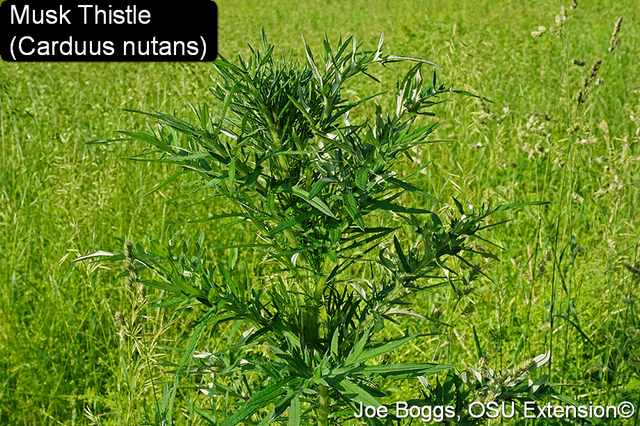 Unfortunately, it was eventually discovered that the thistle head weevil had taken a fancy to a wide range of native thistles including some species that were already rare and struggling.  We commonly lump thistles into the “malevolent weed” category; however, our native thistles provide significant ecological services.  Their loss would impact birds to bees.  The saga of Rhinocyllus conicus in the North America has become a cautionary tale illustrating the possible unintended consequences of releasing non-native enemies of non-native invasive plants no matter how noble the cause. 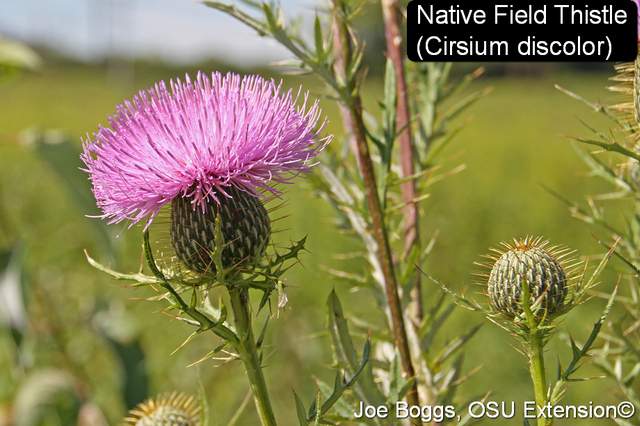 On a final note, the weevil does not have an Entomological Society of America (ESA) approved common name.  “Thistle Head Weevil” is just one of several names applied to the weevil.  This means anyone can propose a common name.  Given that the weevil was first introduced into Canada …