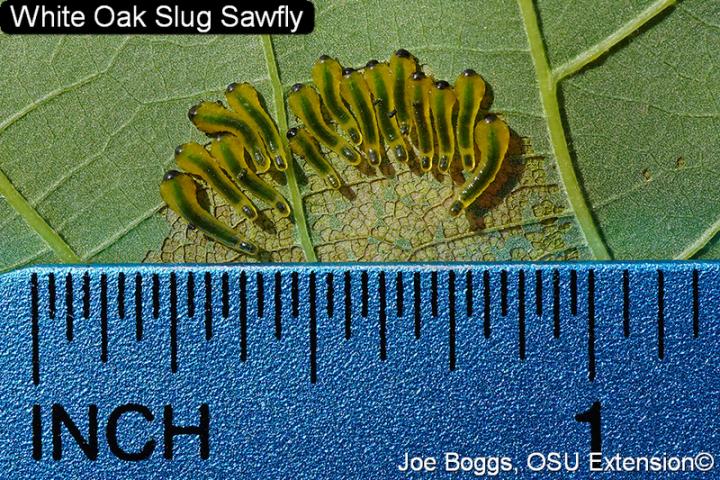 Skeletonizing damage produced by an oak slug sawfly on oaks belonging to the white oak group is becoming evident in southwest Ohio.  The upper leaf surface appears bleached with leave veins remaining apparent.  Flipping the leaves over reveals the slug-like culprits stuck to the underside of the leaves. 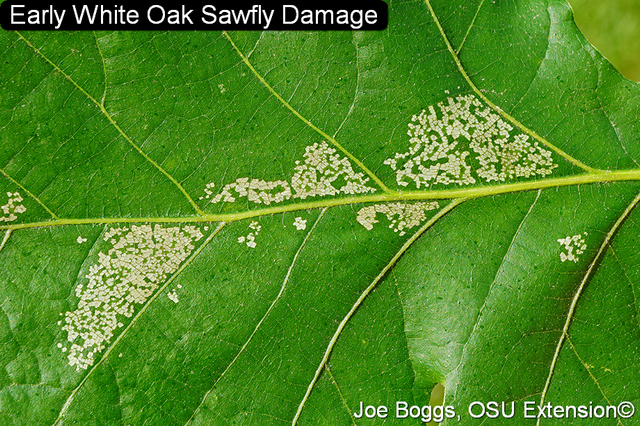 The odd-looking larvae have semi-transparent bodies that are flattened towards the front and tapered towards the back.  The larvae coat themselves in a slimy exudate thought to be produced by glands near their head.  The coating causes them to glisten in the sun.  Research suggests the sticky mucoid-like slime allows the larvae to adhere to the underside of leaves where they feed.  These types of sawfly larvae are generally referred to as “slug sawflies” owing to their shape coupled with their shimmering coating. 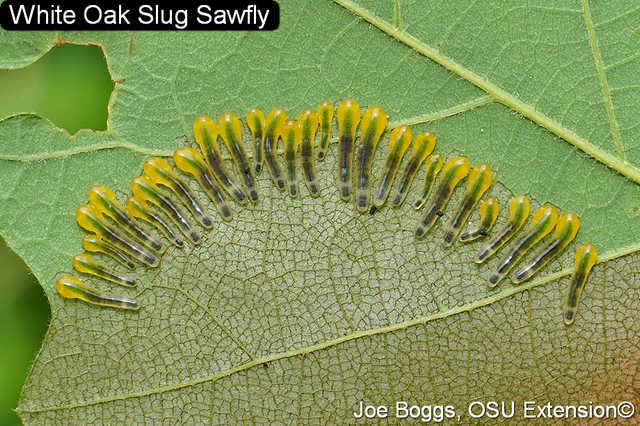 For years, I identified these slug sawflies as Scarlet Oak Sawfly (Caliroa quercuscoccineae (Dyar)), family Tenthredinid) in southern Ohio.  My identification was based on the host and history.  This species has a long history of producing occasional outbreaks on oaks in the forests of southern Ohio as well as central and southeastern Kentucky.

However, as the Entomological Society of America’s (ESA) approved common name implies, the scarlet oak sawfly has a specific host, Quercus coccinea, or a range of related hosts.  Indeed, the authors of two pivotal papers on the biology of the scarlet oak sawfly (see Literature Cited) note the sawfly larvae only feed on oaks in the red oak group.

I’ve most commonly observed the so-called scarlet oak sawfly larvae skeletonizing oaks in the white oak group including burr oak (Quercus macrocarpa), white oak (Q. alba), and swamp white oak (Q. bicolor).  All of the images in the Alert were taken on this group of oaks. 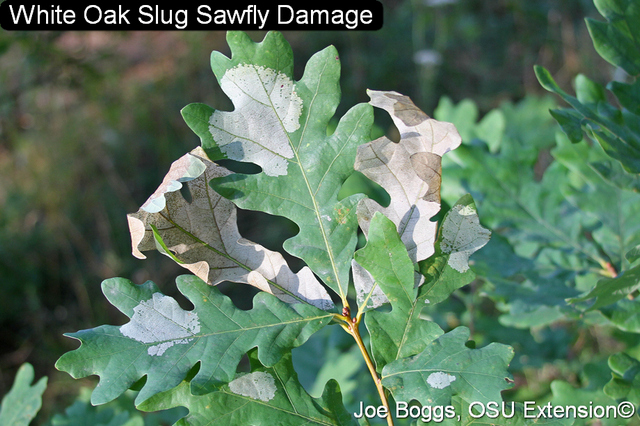 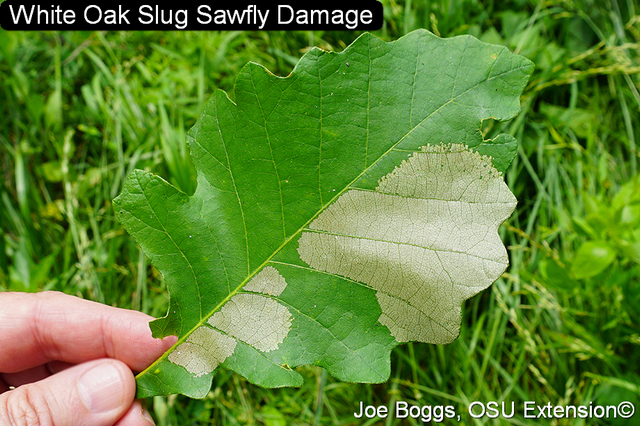 While it’s not unusual for an oak pest to cross the red line to feed on white oaks, the published literature on the scarlet oak sawfly does not support this.  Clarifying the exact species satisfies more than academic interest.  Research data on the biology of one species may not apply to another even if both belong to the same genus.

I’m now convinced the sawfly that I’m seeing on white oaks is not the scarlet oak sawfly but a different species most likely belonging to the genus Caliroa.  Until the species conundrum is resolved, I’m going to call these sawfly larvae simply “white oak slug sawflies.”

This is not the first time BYGL Alerts have borne witness to a species clarification.  In 2015, I reported observing sawfly larvae skeletonizing American bladdernut (Staphylea trifolia) leaves in southwest Ohio.  Those slug-like larvae looked and fed exactly like the sawfly I had been calling “scarlet oak sawfly.”  However, they would die rather than eat oaks in the red or white oak group.  Thanks to some serious sleuthing by others, it was found last year that the true identity of the larvae on bladdernut is C. lunata MacGillivray. 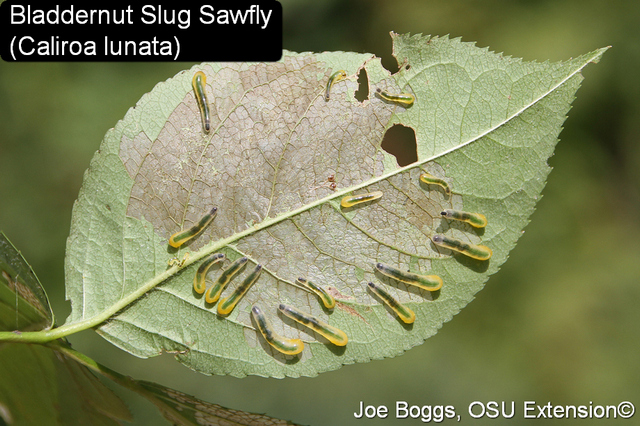 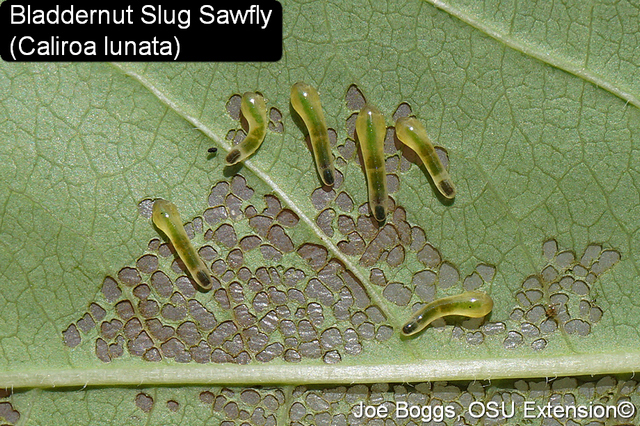 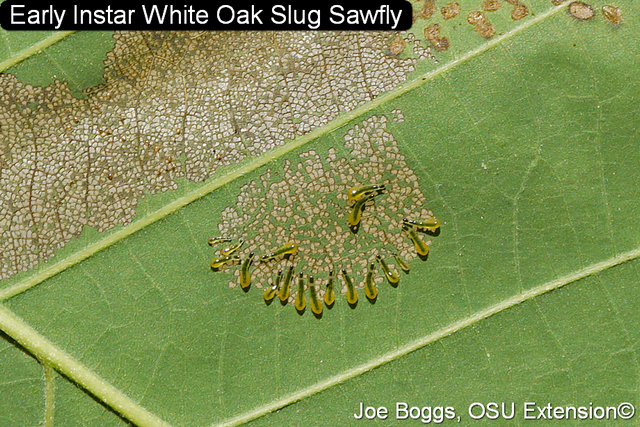 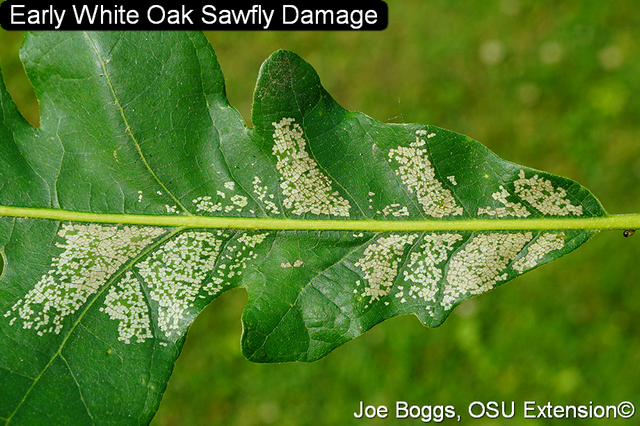 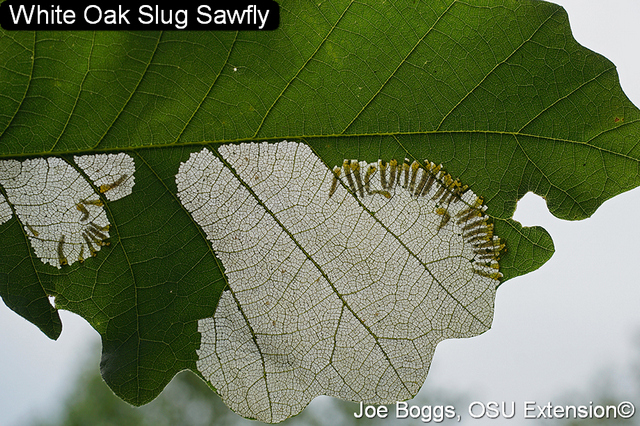 Initially, the upper epidermis has a faded, whitish appearance.  Eventually, the epidermis dries out producing the characteristic skeletonizing symptom associated with this sawfly. 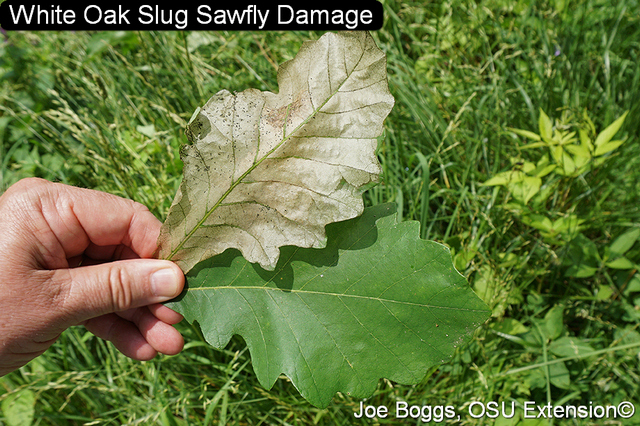 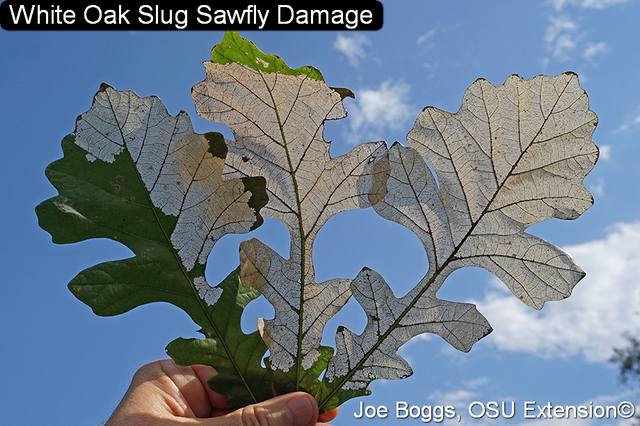 It appears the white oak slug sawfly has at least 2 generations per season.  I’ve taken pictures in the past of early instar larvae in mid-May and again in early July.  Consequently, the damage tends to escalate as the season progresses.

Thus far, the first-generation populations I've come across in southwest Ohio appear to be small with only a few leaves affected and sporadic with few trees affected.  The damage is inconsequential relative to overall tree health.  However, I believe this sawfly should be closely monitored for possible population outbreaks as have been reported in Ohio for the scarlet oak sawfly. 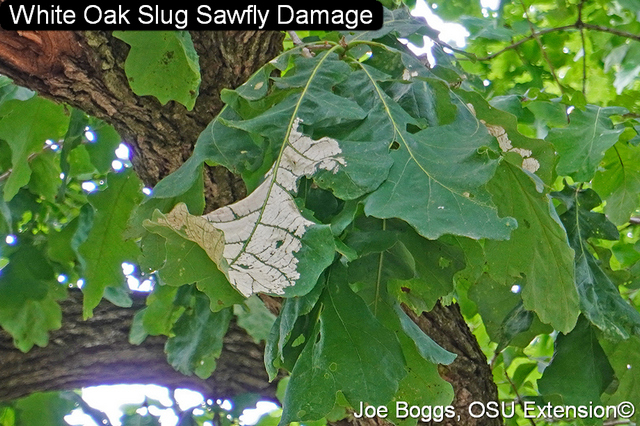 On a final note, I’ve reported in the past that late instar white oak slug sawfly larvae develop two peculiar black markings on their anterior end that makes them look like they are wearing sunglasses.  These markings are not reported to occur on scarlet oak sawfly larvae. 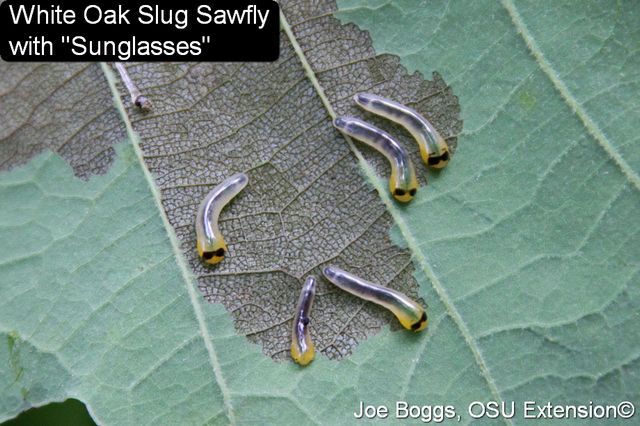 I’ve been corresponding with naturalist and author, Charlie Eiseman, who is based in western Massachusetts and posts a fascinating blog called “BugTracks” [ https://bugtracks.wordpress.com/ ].  Charlie has a strong interest in sawflies belonging to Caliroa and did a review of all the postings on iNaturalist of sawflies in this genus.  He noted that the only sawfly larvae sporting “sunglasses” were those found feeding on oaks belonging to the white oak group.  However, he observed that some larvae seemed to have the odd sunglasses-like markings in the early instar stages adding to the identification dilemma.

Nordin, G.L., and E.L. Johnson.  1983.  Biology of Caliroa quercuscoccineae (Dyar) (Hymenoptera: Tenthredinidae) in Central Kentucky I. Observations on the Taxonomy of Principal Life Stages, Journal of the Kansas Entomological Society, Vol. 56, No. 3, pp. 305-314