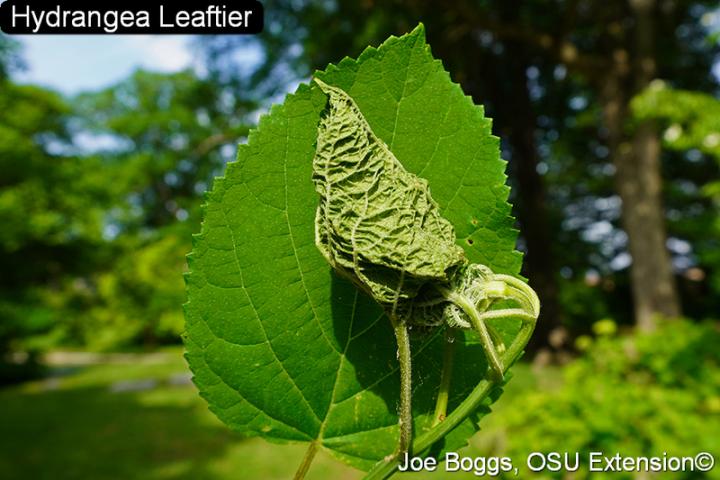 The Hydrangea Leaftier Moth (Olethreutes ferriferana, family Tortricidae) is so named because the caterpillars tie together developing leaves on wild and cultivated hydrangeas to produce oddball “leaf-purse” structures.  The caterpillars are completing their development in southwest Ohio but their handiwork remains. 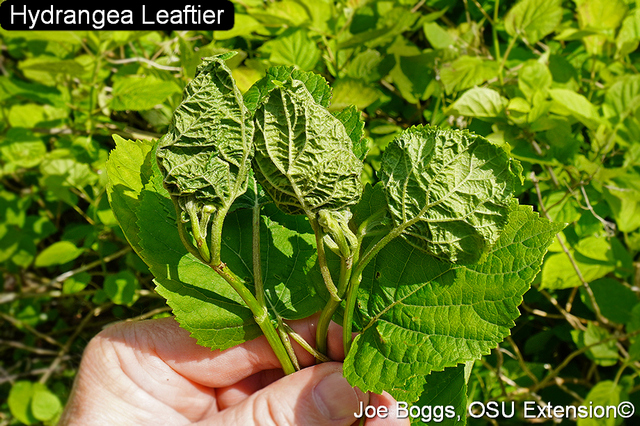 Individual caterpillars apply sticky silk along the edges of newly expanding hydrangea leaves to cement or tie the leaves together.  This creates a purse or envelope-like structure that surrounds newly developing leaves and flowers. 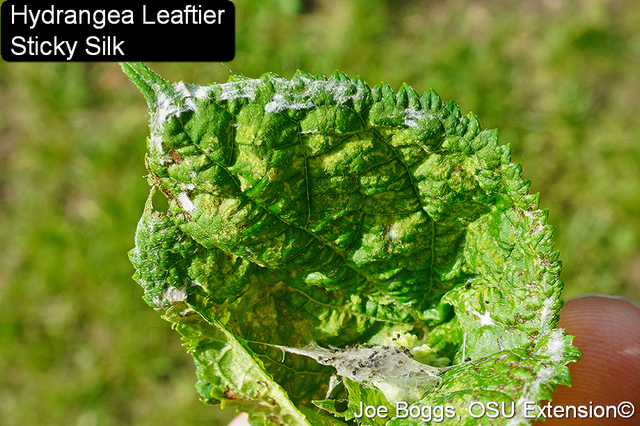 Most commonly, the leaf abodes involve two leaves cemented together.  However, the caterpillars will occasionally fold a single leaf.  The tied leaves fail to fully expand and become dark green, wrinkled and gnarled; the structure may superficially resemble a plant gall 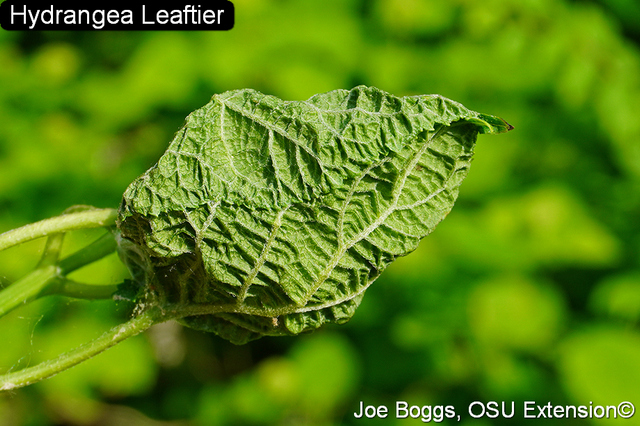 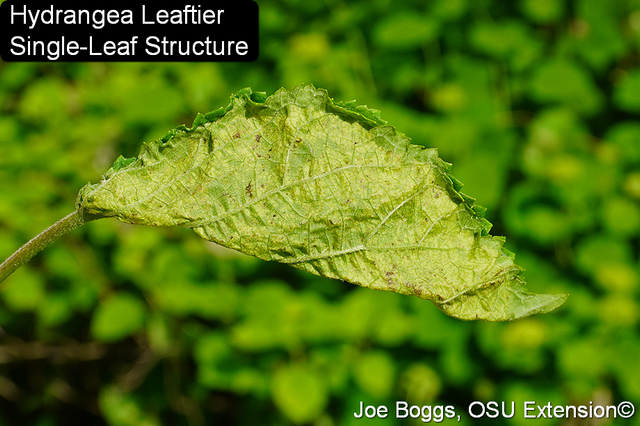 The caterpillars feed upon the leaves and flowers enveloped within these protective structures.  Opening the tied leaves will reveal a single caterpillar housed within a silk-lined tube littered with dark green frass pellets.  The green semi-transparent caterpillars are very small and have shiny black head capsules and a black thoracic shield on top of the segment just behind the head. 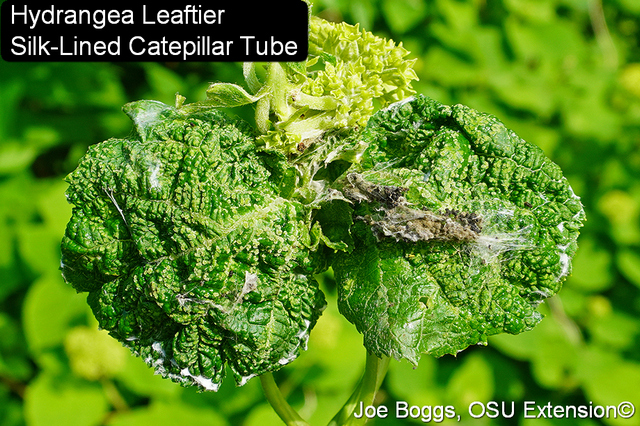 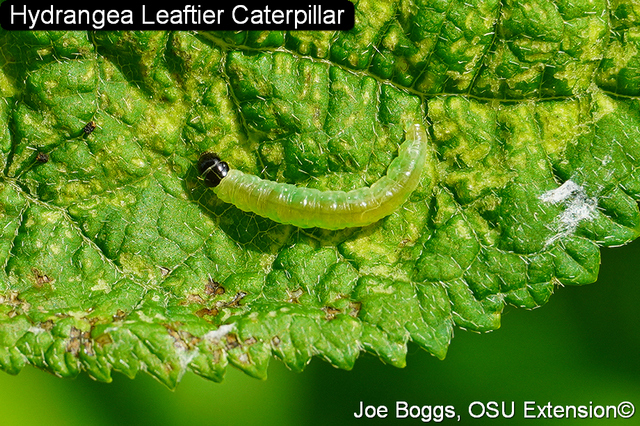 Currently, the caterpillars in southwest Ohio are completing their development.  I examined the leaf structures on hydrangea in mass plantings in two locations and found either late instar caterpillars or pupae within the structures.  Pupal skins hanging from the leaftier's leaf structures indicate moths are on the wing. 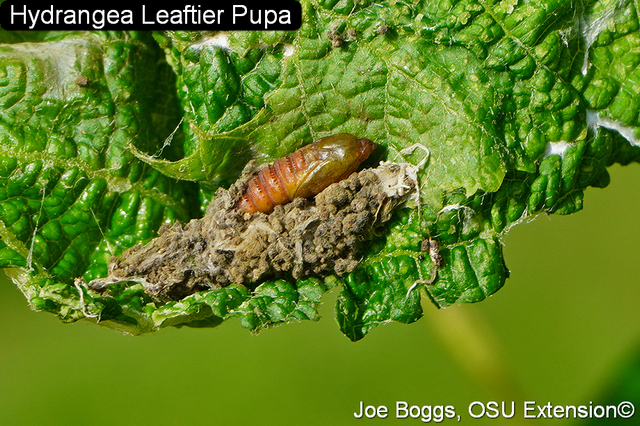 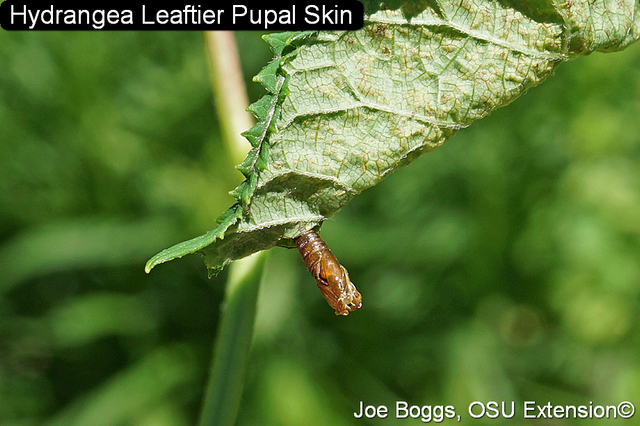 Damage to wild or cultivated hydrangeas seldom progresses beyond the "oddity category."  This is important because the leaf structures shield the caterpillars from direct exposure to a topical insecticide and there is no data on the efficacy of systemic insecticides.  If caterpillars or pupae are found within the structures, they can be dispatched through death by squeezing.

On the other hand, according to the literature, leaf shelters constructed by this and other lepidopterous larvae play an important role in forest ecology by sheltering spiders and other arthropods.  Indeed, it’s common to find earwigs and spiders sheltering in the hydrangea leaf abodes before the caterpillars vacate the premises.  The spiders will co-exist with the caterpillars without killing their benefactor. 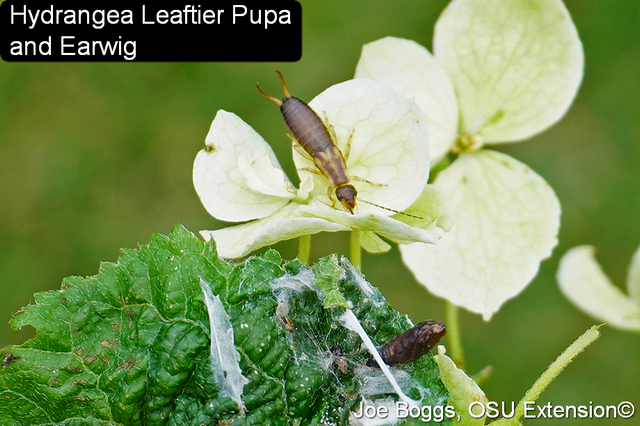 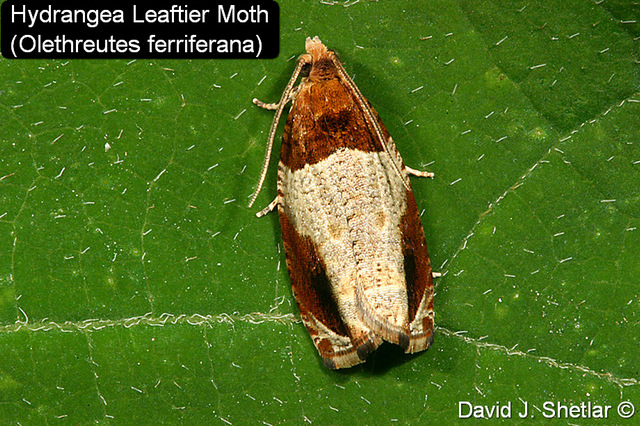 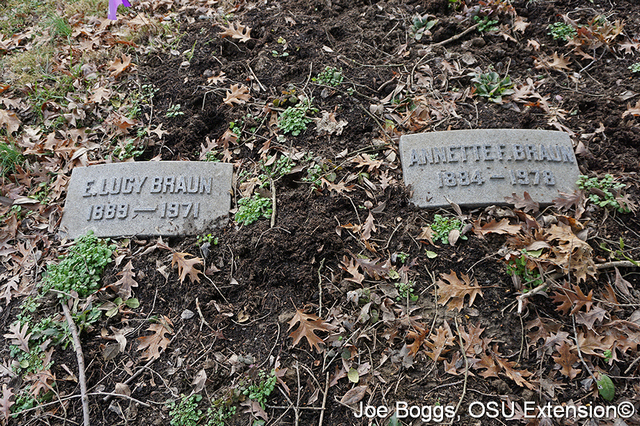 Both are interred side-by-side in Spring Grove Cemetery and Arboretum in Cincinnati.  All of the images appearing in this Alert, with the exception of the picture of the moth, were taken on hydrangea plantings in Spring Grove.