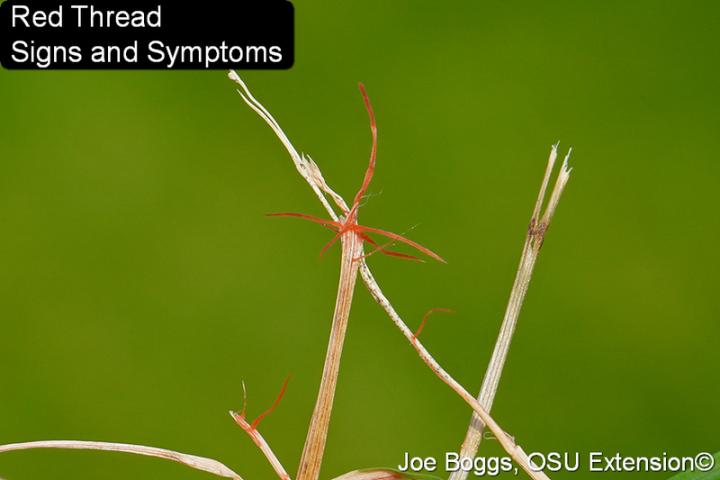 Infectious plant diseases may be diagnosed by looking for both “signs” and “symptoms.”  A sign is some part of the plant pathogen revealed such as thread-like mycelia.  A symptom is the visible consequence of a disease.

Connecting signs with symptoms supports the diagnostic conclusion the symptoms are the result of something infectious such as a disease produced by a fungal pathogen (biotic).  Otherwise, the symptom could be produced by something that is non-infectious such as dog urine (abiotic).  While the “dog-patch disease” of turfgrass is associated with a barking biotic agent, the urine alone doesn’t spread … thank goodness. 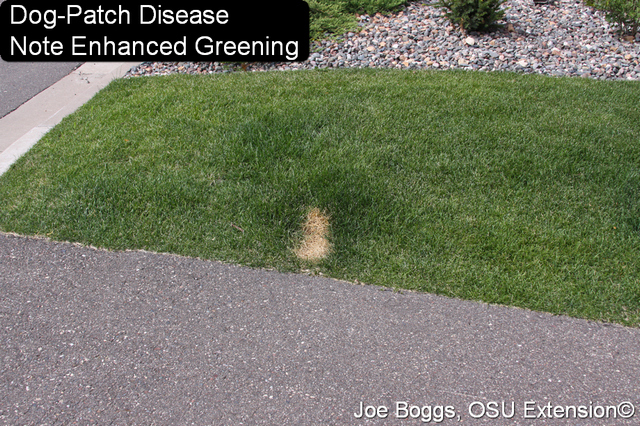 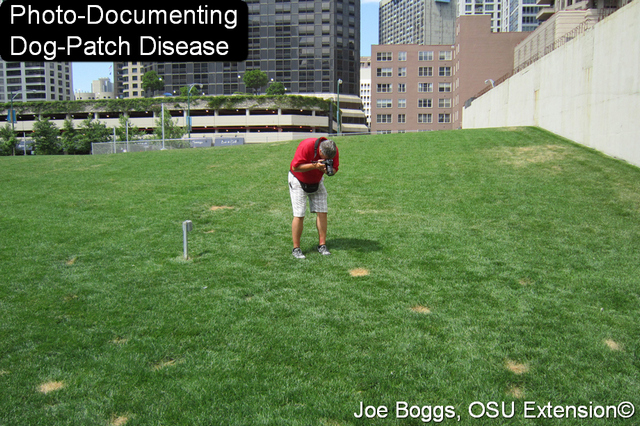 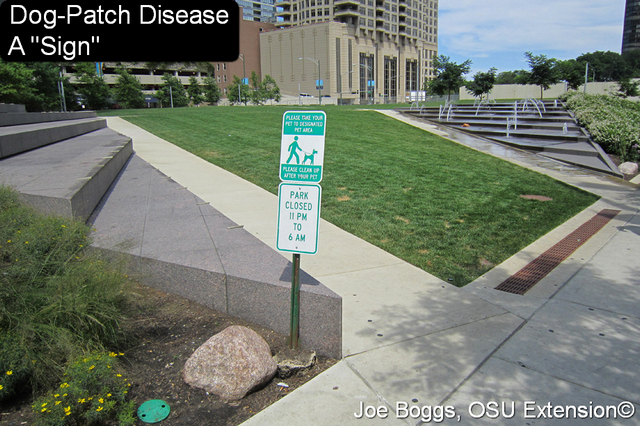 Red Thread produced by the infectious fungal pathogen, Laetisaria fuciformis, provides a good example of the importance of connecting signs with symptoms.  Small tannish-brown patches (symptom) of turfgrass are appearing in lawns in southwest Ohio.  A close examination is revealing thread-like coral pick to red mycelia (sign) growing from the turfgrass blades. Observing the signs along with the symptoms will let Fido off the hook. 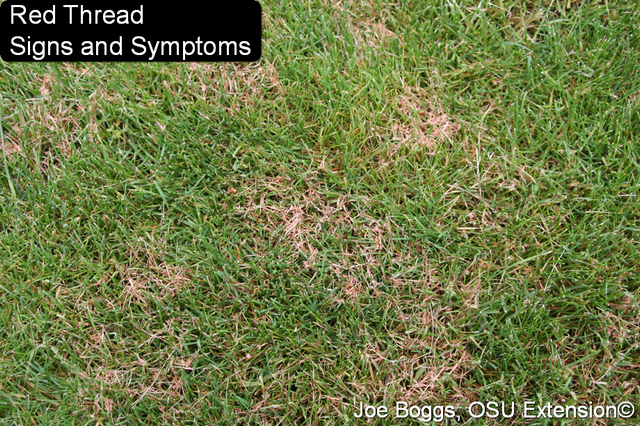 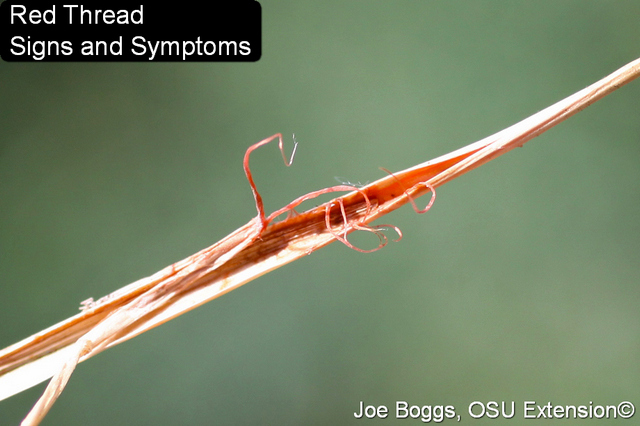 Of course, signs and symptoms of an infectious disease change over time and are commonly enhanced by environmental conditions.  The two images below are not color-enhanced.  That’s what a red thread patch and the mycelia looked like after two days of rain. 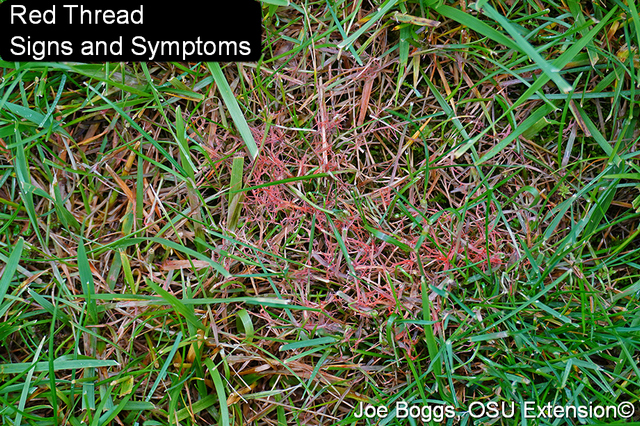 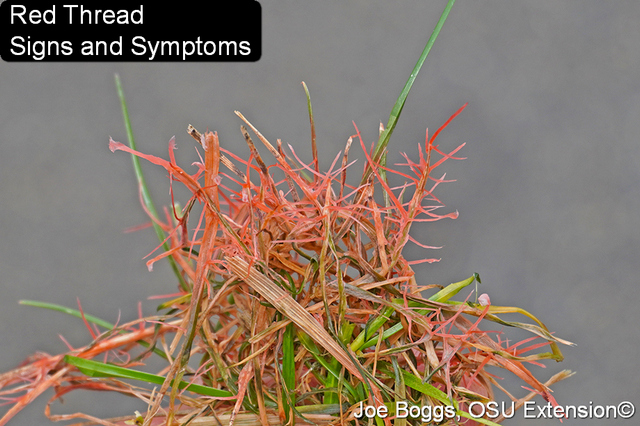 However, I’ve found that red thread is seldom revealed through such dramatic signs.  It’s more common for the turfgrass in the patch to be tannish-brown and the mycelia shriveled and faded owing to dehydration or the disease running its course.  This requires a much closer bended knee examination as demonstrated by Erik Draper (OSU Extension, Geauga County). 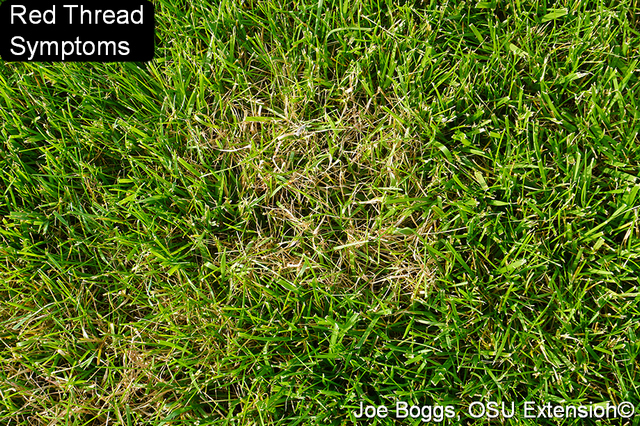 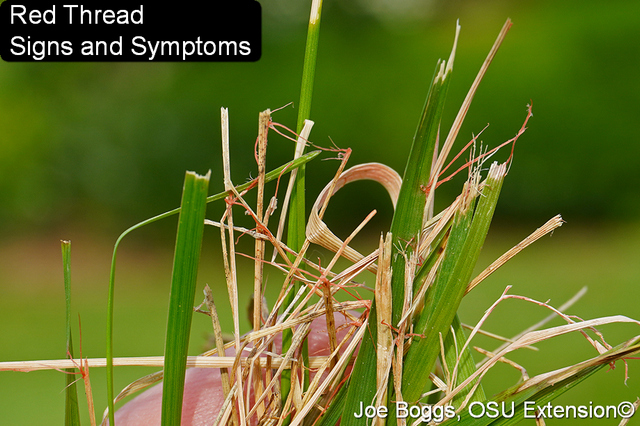 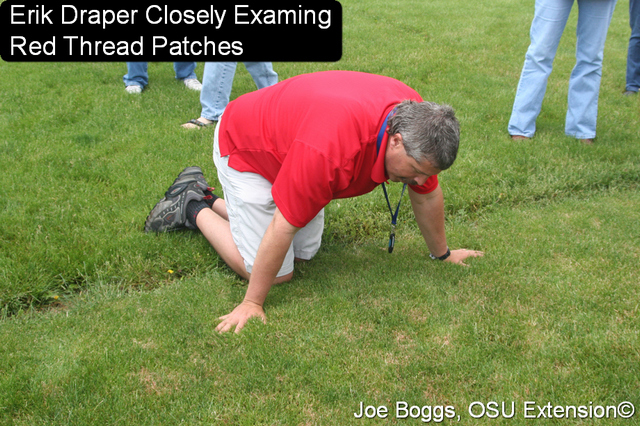 The good news is the red thread fungus only infects the blades and stems.  It does not infect the root system to kill the entire turfgrass plant.  So, heavily infected grass plants can recover.  The bad news is multiple patches of affected turfgrass measuring from 4” to over 2’ in diameter can seriously diminish the aesthetics of home and commercial lawns. 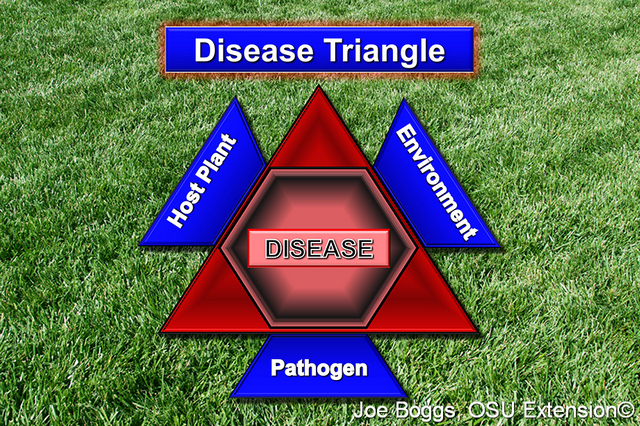 The Host:  Turfgrass may be inherently susceptible or resistant owing to genetics.  The red thread fungus can infect Kentucky bluegrass (Poa pratensis), turf-type tall fescue (Festuca arundinacea), and perennial ryegrass (Lolium perenne).  However, all cultivars of these cool-season turfgrass species are not equal. The Cornell University fact sheet listed below under “Helpful Fact Sheets” provides a few turfgrass cultivars that are resistant to red thread.  Using plant selection to thwart a plant disease or pests provides a good long-term solution to the problem.

Turfgrass may also become susceptible to red thread owing to poor cultural practices. Soil fertility is a key factor.  Given that the fungus only infects the stems and blades, properly nourished turfgrass can outgrow the infections.  To satisfy nitrogen needs, lawns suffering from red thread should receive consistent fertilizer applications following general lawn fertilizing guidelines.  Nutrient deficiencies involving other macronutrients such as phosphorus and potassium as well as some micronutrients have also been shown to make turfgrass more susceptible to red thread.  So, a soil test should be performed to guide corrective actions.

The Environment:  Infections by the red thread fungus are supported by cool temperatures ranging from 40 – 70F.  Thus, red thread most commonly occurs in the spring and fall.  Infections are enhanced by extended wetting of the turfgrass, so irrigation should be confined to the early morning hours rather than late afternoon or early evening.

The Pathogen:  Grass clippings should be removed from heavily infected lawns to reduce pathogenic inoculum.  Equipment should also be thoroughly cleaned between mowing.

Fungicides may also be used to suppress pathogenic infections.  A comprehensive list of effective products is provided in the NC State fact sheet listed below.

However, fungicide applications should be reserved as a final line of defense rather than the first line of action.  Red thread can be effectively managed using the aforementioned cultural practices.  In fact, as with many fungal plant diseases, it’s not likely that you can spray your way out of a heavy red thread outbreak without applying tactics drawn from the two other sides of the Disease Triangle.