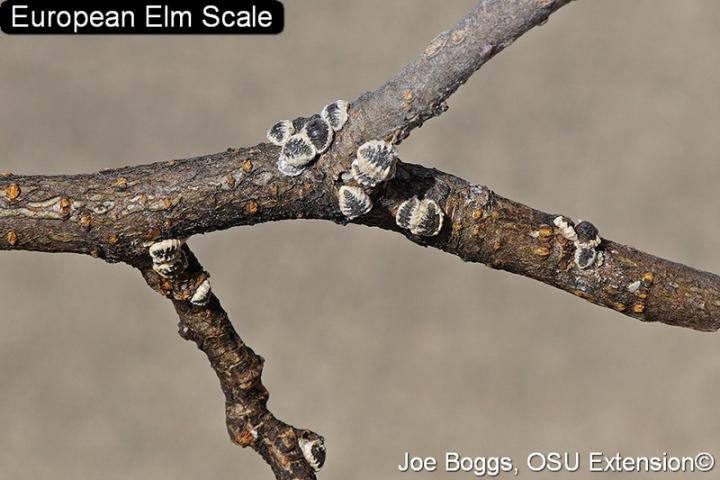 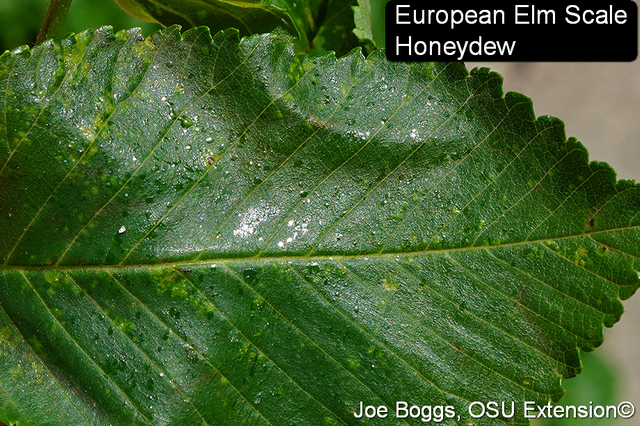 The scale is most often found in bark crevices as well as tucked into branch forks and wrapped around buds.  Presumably, this places phloem vessels within easier reach of the scale’s piercing-sucking mouthparts. 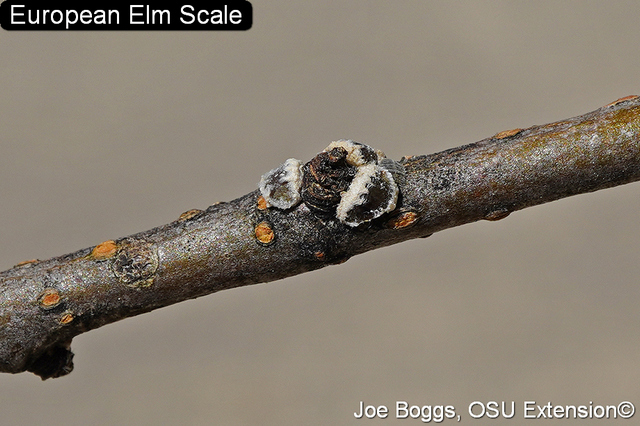 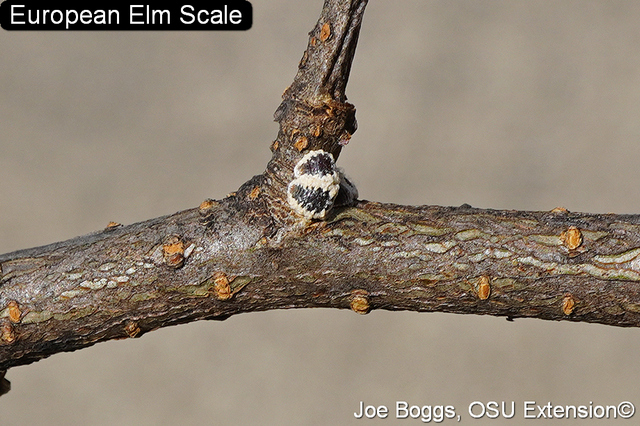 The scale may also be found on or around the edges of woundwood.  Several of the images in this Alert shows the felt scales along the edges of oviposition wounds on American elm (Ulmus americana) that were created by Periodical Cicada (Magicicada spp.) females during last year’s Brood X (10) mass emergence. 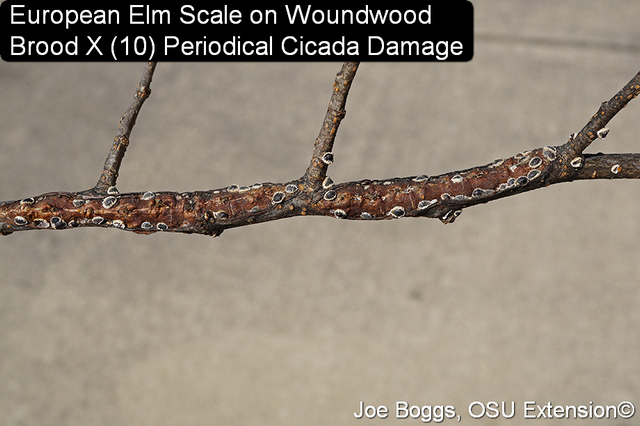 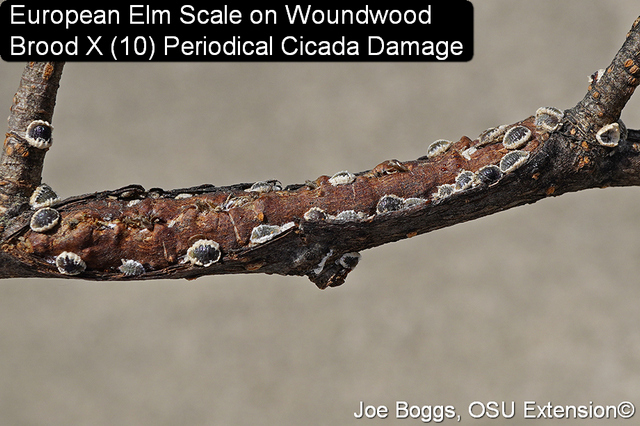 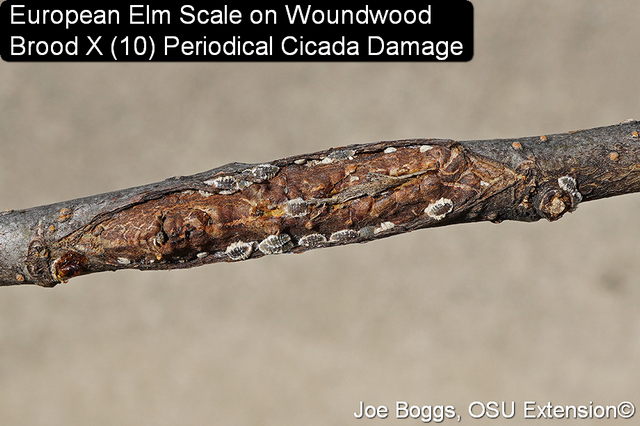 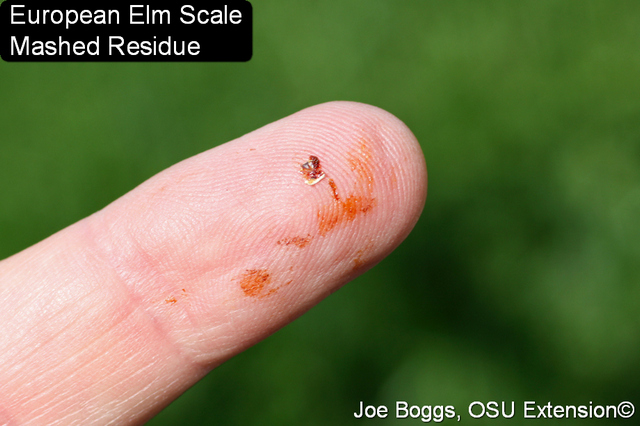 Both the adults and nymphs of the European elm scale insert their piercing-sucking mouthparts into phloem vessels to suck sap.  They extract both carbohydrates for energy and amino acids to build proteins and enzymes.

However, the sugary sap contains a much higher percentage of carbohydrates by volume compared to amino acids.  This means the scale must remove a huge amount of sap to extract the amino acids required to meet their needs.  They discharge excess sap from their anus in the form of a sticky, sugary, clear liquid called "honeydew;" a polite name for the liquid scale poo.

The production of honeydew is a key difference between so-called armored scales such as Japanese Maple Scale (Lopholeucaspis japonica).  Armored scales are so named because they spend much of their life cycle protected under a waxy armored cover called a “test.”

Armored scale nymphs and females feed by inserting their long piercing-sucking mouthparts into plant cells causing them to rupture and collapse.  They do not tap into phloem vessels with sap flowing like a firehose, so they don’t need to void excess sap.  Thus, armored scales do not produce honeydew.

Of course, there’s no scale law preventing armored scales from taking up residence on trees that are also infested with a soft scale or felt scale.  This can present a diagnostic challenge as you can see with the American elm image below.  Although Japanese maple scale far outnumbers European elm scale, the black sooty mold on the branch signals that a felt scale is afoot. 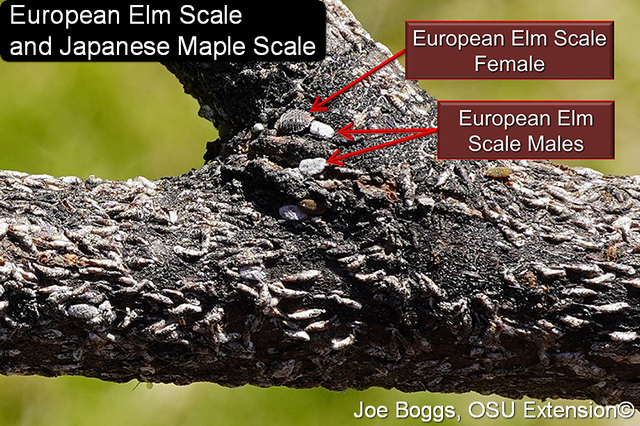 The image below also shows that elm trees may be infested by both European elm scale as well as soft scales such as European fruit lecanium scale.  Both are prolific producers of honeydew. 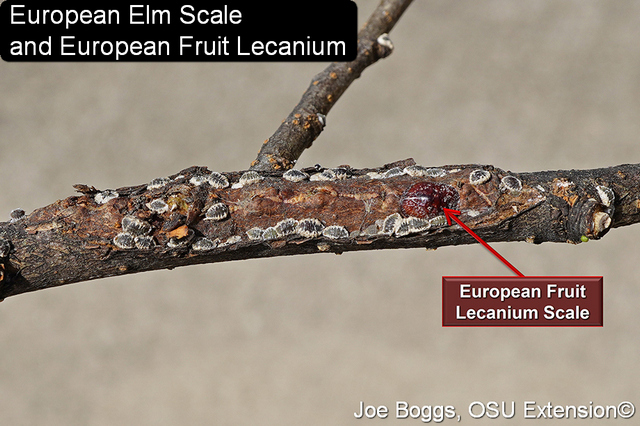 European elm scale has a life cycle that’s similar to the aforementioned calico scale.  Females are located on stems in the spring and 1st instar nymphs (crawlers) move from the stems to the underside of leaves to spend the summer and eventually mature into 2nd instar crawlers.  They move back to the stems in the fall.

Although European elm scale females are capable of reproducing without males, when the males are present, they look very different from the females.  The males overwinter in white cocoons. 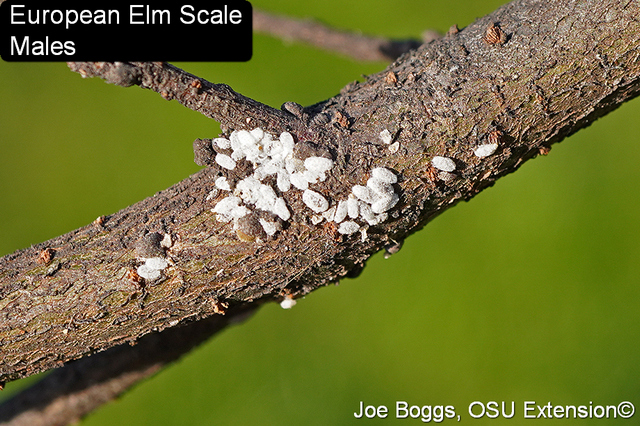 Plant selection offers a long-term management option for European elm scale.  The scale is most commonly found on American elm although some online references report a range of susceptibility among the Dutch elm disease-resistant cultivars with ‘Patriot’, ‘Prairie Expedition’, ‘Princeton’, and ‘Valley Forge’ being more susceptible compared to ‘Accolade’, ‘Commendation’, ‘Frontier’, ‘Homestead’, ‘Triumph’, and ‘Red Tip’.  Asian elms and many of the hybrids are also less susceptible.

Although European elm scale is not generally considered a tree killer, accumulated chronic stress caused by substantial sap loss from heavy infestations coupled with other stress-inducing conditions may cause canopy thinning, stem dieback, and tree death.  Thus, the best first step in scale management is to resolve other issues that may affect overall tree health.

This does not include making fertilizer applications unless correcting a nutrient deficiency revealed by a soil test.  Excessive nitrogen can increase scale populations by providing an enhanced source of this key element in amino acids.  In essence, high nitrogen enriches the phloem sap.

Topical horticultural oil applications made during tree dormancy are also helpful and will preserve predators and parasitoids that help to keep the scale in check.  Thorough coverage of the stems is required.  Topical applications of insecticides targeting the crawlers after egg hatch are effective; however, such applications can reduce the insect enemies of the European elm scale.