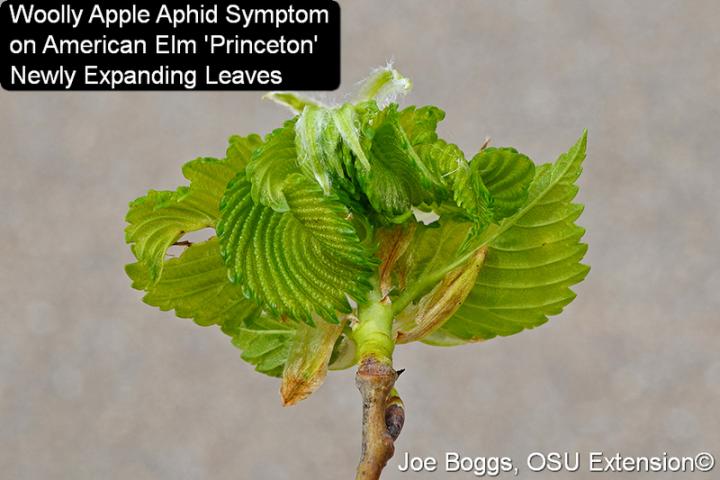 I recently came across the odd-looking handiwork of Woolly Apple Aphids (WAA) (Eriosoma lanigerum) on newly emerging leaves of American elms (Ulmus americana, ‘Princeton’) in southwest Ohio.  ‘Princeton’ is an old cultivar first propagated by Princeton Nursery in New Jersey in 1922 that was later found to be resistant to the fungal pathogens behind Dutch Elm Disease (DED).

‘Princeton’ along with other DED resistant cultivars are responsible for the reemergence and ever-expanding wide use of American elms in North American landscapes.  Of course, being resistant to DED doesn’t automatically convey resistance to other elm pests including Woolly Elm Aphids (WEA) (E. americanum) as well as WAA. 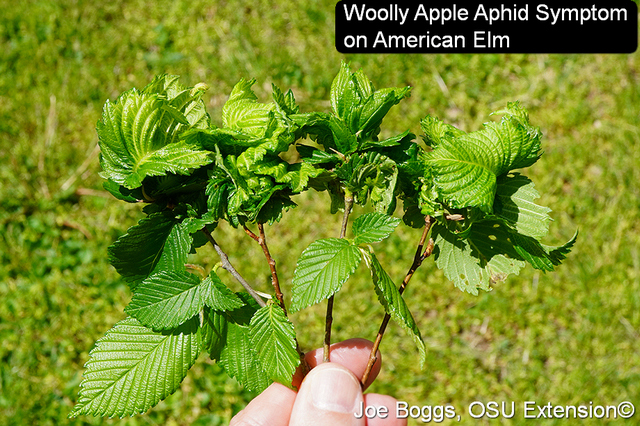 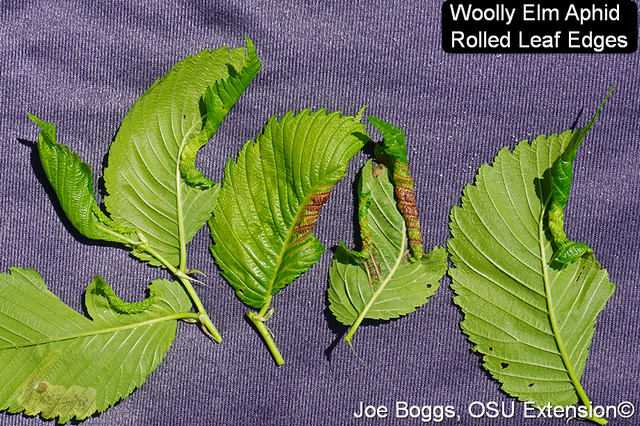 WAA and WEA are native insects that appear in pest records dating back to when American elms were "America's Street Tree."  The significance of the reemergence of these historical woolly pests of American elms is that each has an alternative host.  While they may not cause significant harm to healthy, established American elms, they can wreak havoc on their alternate hosts.

American elms are considered the alternate host for WAA.  Spring feeding damage on elms causes shoots to form rosette-like structures comprised of curled, twisted, and stunted leaves.  The affected leaves overlap producing cavities within which the aphids live and feed.  Although the leaf distortions appear to be random, opening the structure may reveal striking spiral or pinwheel patterns produced by the leaf veins. 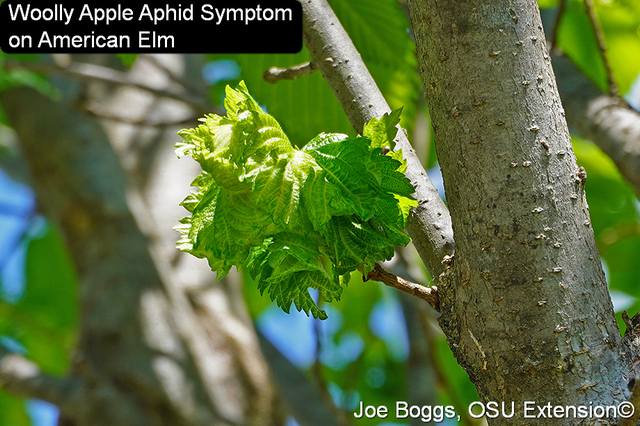 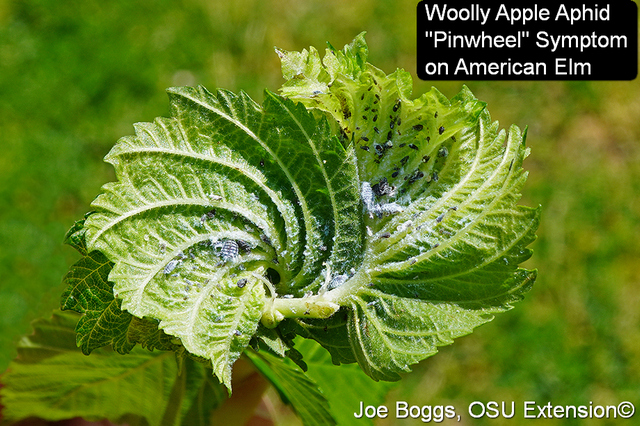 WAA also produces copious quantities of honeydew as a by-product of tapping into phloem vessels to extract sap.  The honeydew rains down onto lower leaves and stems as well as anything else positioned beneath an infested tree.  The sweet sticky goo is commonly colonized by black sooty molds further degrading the aesthetic value of heavily infested trees and their immediate surroundings. 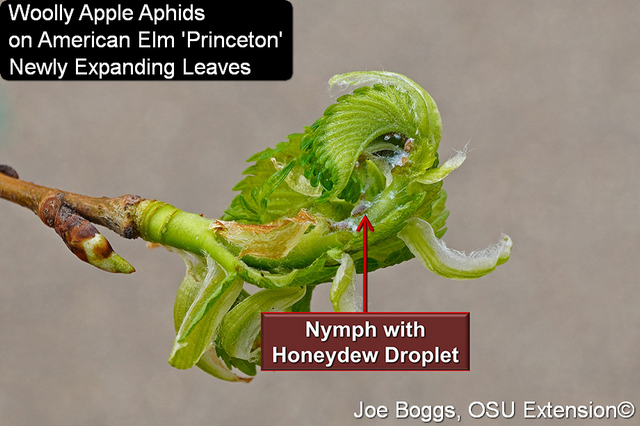 WAA is not considered an outright elm tree killer.  However, some historical reports note that on heavily infested young trees or trees in poor sites, the combination of leaf damage coupled with early-season sap loss can make trees more susceptible to other problems.

The new crop of aphids that develop in the elm leaf rosettes migrate to a rosaceous host in the summer where they form damaging colonies on both the shoots and roots.  As its common name indicates, WAA is a major pest of apples.  Interestingly, various online university resources note that with the loss of American elms, this aphid demonstrated the ability to maintain damaging populations on single rosaceous hosts calling into question the need to alternate with an elm host. 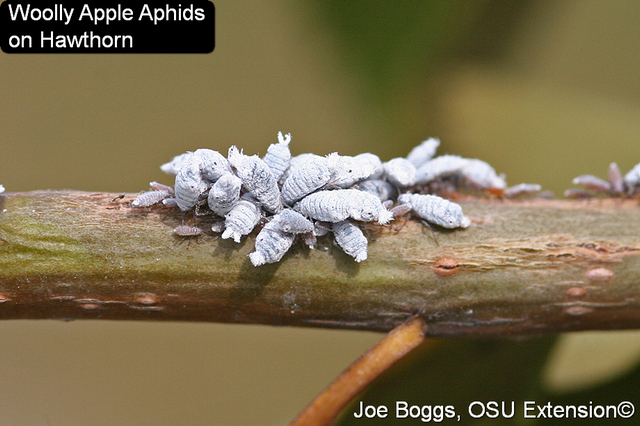 WEA causes new leaves to roll along one edge with the tissue becoming swollen to form a gall-like structure which is sometimes referred to as a "pseudo-gall."  The woolly aphids reside and feed within the rolled structure. 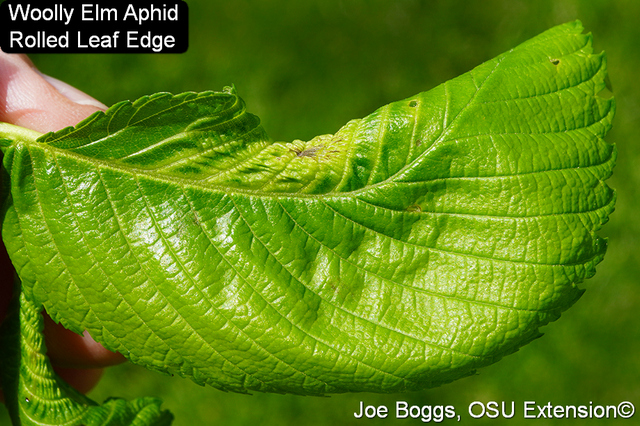 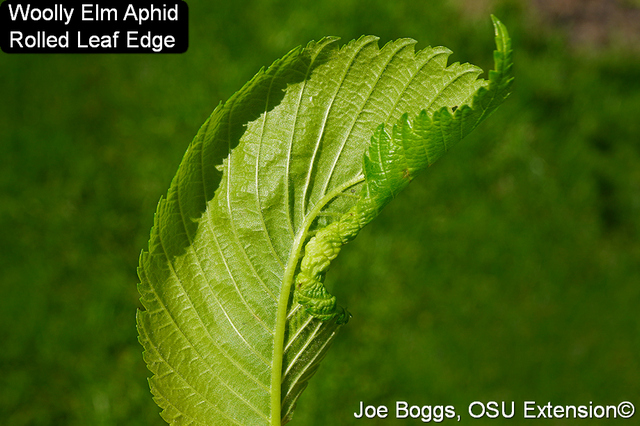 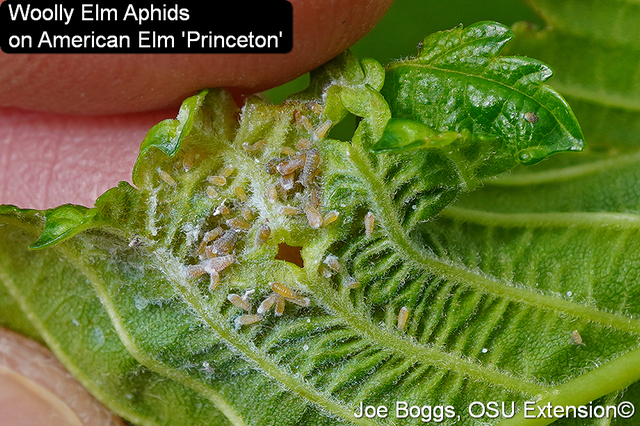 We’re Not Going to Take It:  Management Options

Biological and Chemical Management Options:  Populations of these native aphids tend to be effectively regulated naturally by the “3 – Ps”:  Predators, Parasitoids, and Pathogens.  It’s common to find lacewing and syrphid (hover) fly larvae and lady beetle adults and larvae lurking within the aphid colonies, wolves among sheep.  The native parasitoid wasp Aphelinus mali has a targeted taste for WAA and has been exported to other countries to suppress this apple pest.  In fact, by the time we notice the aphids, the 3-Ps are usually already on the job.

Using insecticides to manage these aphids is problematic because the aphids are located within distorted leaves which places them out of the reach of topical insecticides including insecticidal soaps or horticultural oils.  I could find no efficacy data on systemic insecticides but suspect they may provide relief if applications are made with enough lead time for toxic levels to develop within the leaves.  The translaminar activity of abamectin (e.g. Avid) may also allow this active ingredient to reach the aphids.

Management by Host Preference:  The rise and fall, then rise again of American elm has been remarkable.  Along the way, we've picked up a smorgasbord of genetic variations aimed at thwarting DED.  These include selections of American elm; selections of non-native elms; and a mix and match of hybrids produced from parents drawn from North America, Europe, and Asia.

Dan Potter and Carl Redmond (University of Kentucky, Department of Entomology) used elms planted in Lexington, KY, as part of the National Elm Trial to assess host preferences for an impressive range of potential elm pests including the woolly and cockscomb aphids.  You can access their full 2013 publication titled, "Relative Resistance or Susceptibility of Landscape-suitable Elms (Ulmus spp.) to Multiple Insect Pests," by clicking this hotlink:  https://webdoc.agsci.colostate.edu/bspm/Kentucky2013.pdf

The Kentucky researchers found that WEA is selective for Ulmus americana, but all cultivars were not equal.  'Princeton' was the most susceptible followed by 'Valley Forge', 'Jefferson', and 'New Harmony'.  'Lewis and Clark Prairie Expedition' was not infested.  None of the Asian elms or hybrids involving Asian or European heritage were affected.

They also observed that WAA was highly selective for American elm and none of the Asian elms or hybrids involving Asian or European heritage were affected.  But again, all American elm cultivars were not equal.  'Princeton' was the most susceptible followed closely by 'Jefferson'.  'Valley Forge' and 'New Harmony' had minor infestations and 'Lewis and Clark Prairie Expedition' was not infested.