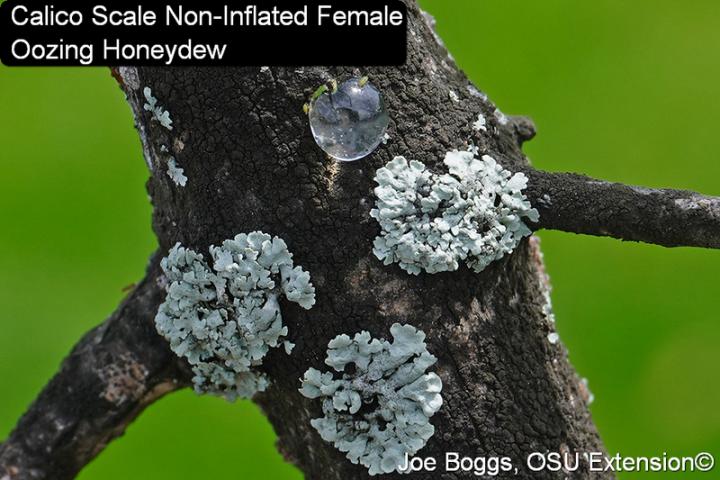 Careful Where You Park Your Car

Calico scale (Eulecanium cerasorum) is notorious for raining large quantities of sweet sticky honeydew onto the leaves and stems of its host tree as well as onto understory plants, sidewalks, parked cars, slow-moving gardeners, etc.  Indeed, my glasses became speckled with tiny honeydew droplets while taking pictures for this Alert. 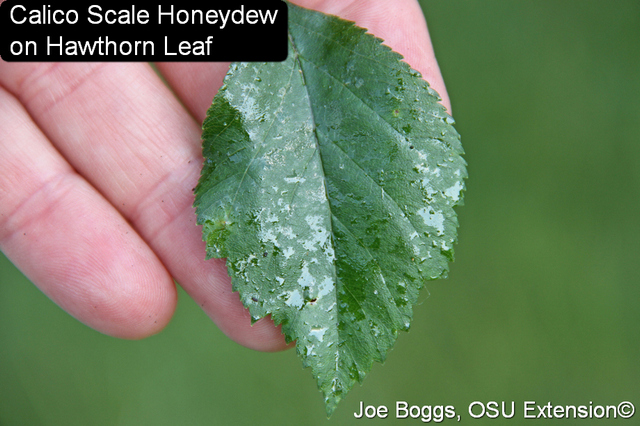 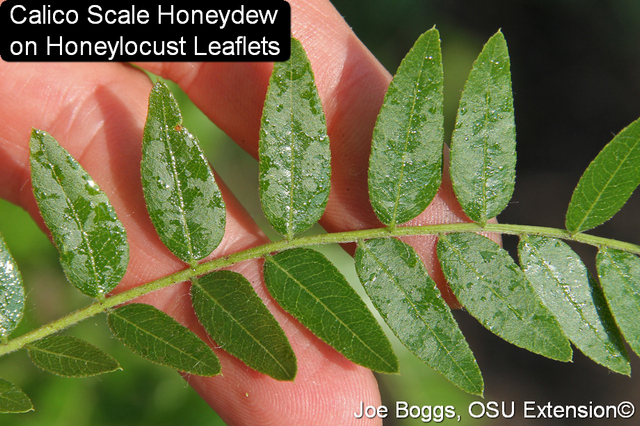 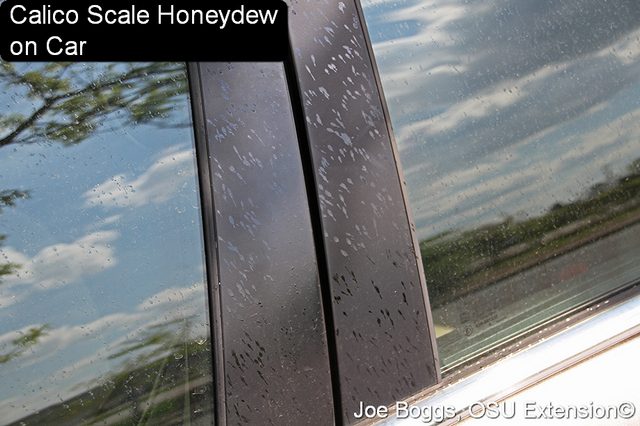 A dingy patina is added when honeydew on leaves and branches becomes colonized by black sooty molds.  The non-pathogenic sooty molds only grow on the surface and do not infect plants.  However, studies on other prolific honeydew-producing insects have shown that dense sooty mold overgrowths on the leaves of understory seedlings can suppress seedling growth and survival. 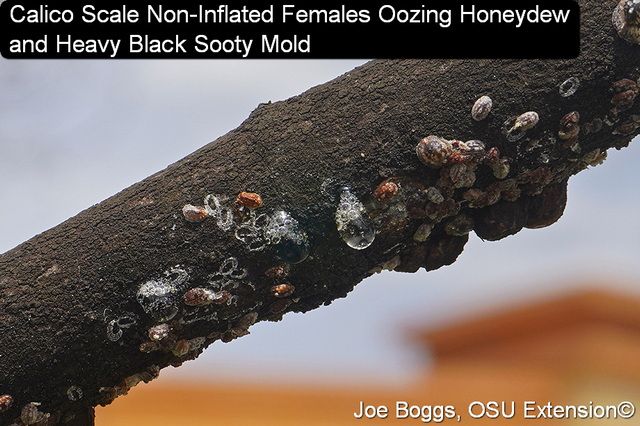 This non-native scale is a type of “soft scale” so named because its helmet-shaped shell can be easily crushed.  However, they don’t start the spring looking like their late-spring pictures. 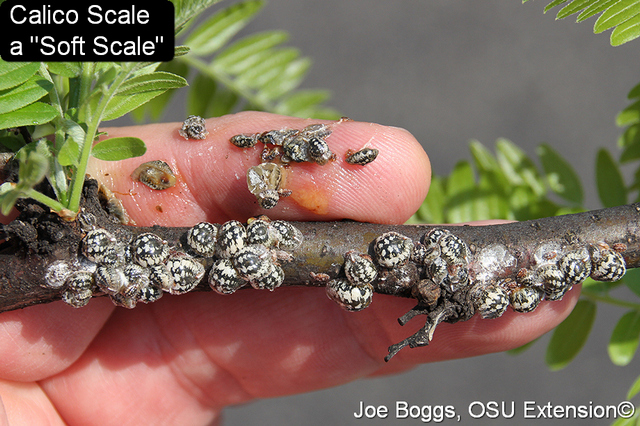 Calico scale females (there are no males) spend the winter as small, crusty, flattened late instar nymphs (crawlers) stuck onto plant stems.  They look nothing like their mature form and may be overlooked or misidentified. These flattened females will eventually inflate ("puff up") and their characteristic helmet-shaped shells will display the starkly contrasting calico pattern of black-and-white markings that gives this scale its common name. 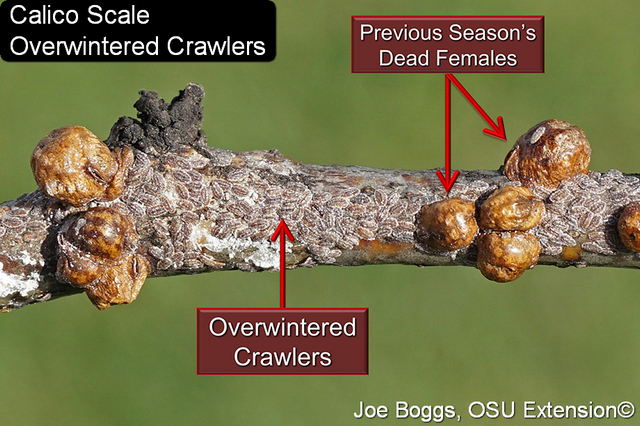 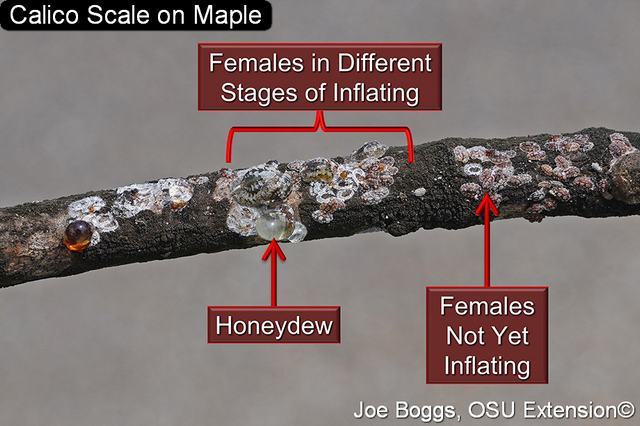 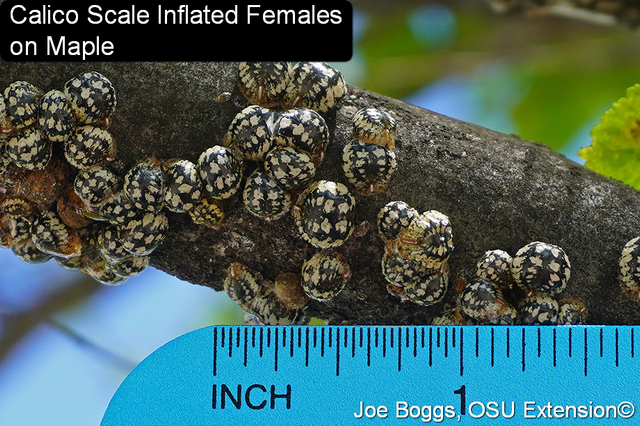 As with all soft scales as well as aphids, planthoppers, froghoppers (= spittlebugs), and mealybugs, calico scale females and nymphs insert their piercing-sucking mouthparts into phloem vessels to withdraw sap.  They extract both carbohydrates for energy and amino acids to build proteins and enzymes.

However, the sugary sap contains a much higher percentage of carbohydrates by volume compared to amino acids.  This means the sap-sucking insects must remove a huge amount of sap to extract the amino acids required to meet their needs.  They discharge excess sap from their anus in the form of a sticky, sugary, clear liquid called "honeydew;" a polite name for the liquid scale poo. 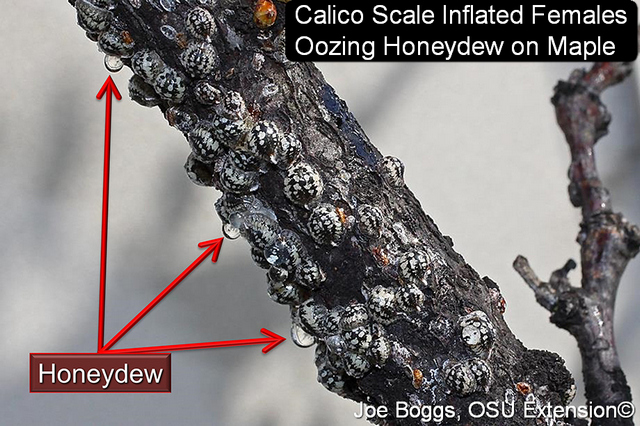 Honeydew is ramping up in southwest Ohio.  If you look closely at some of the pictures in this Alert, you'll see the shimmering droplets of honeydew are oozing from females before they inflate like balloons as they mature.  In fact, the droplets may look like the trees are leaking sap from their bark. 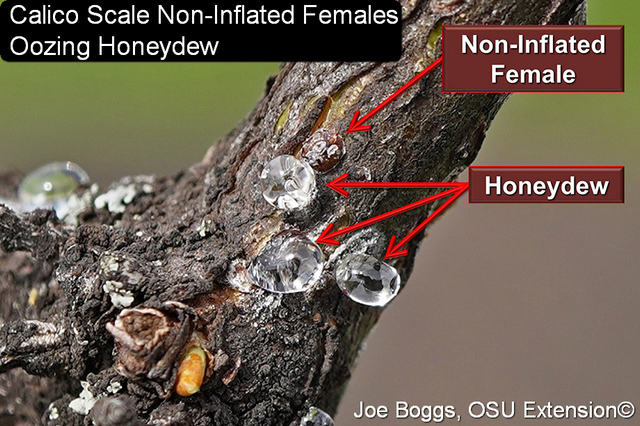 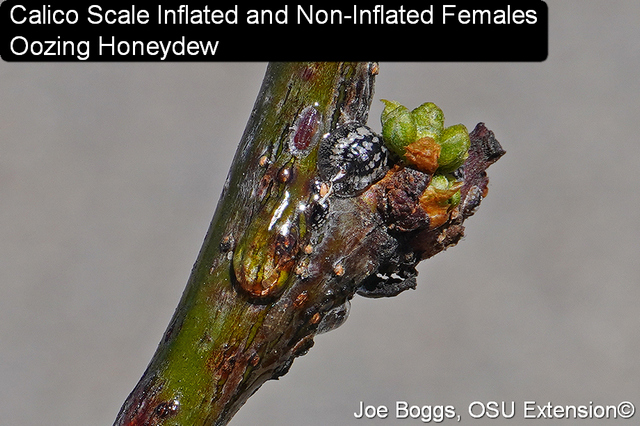 The females will continue to spew honeydew as they mature towards egg production.  Each female can produce more than 1,000 eggs, so populations can build rapidly. 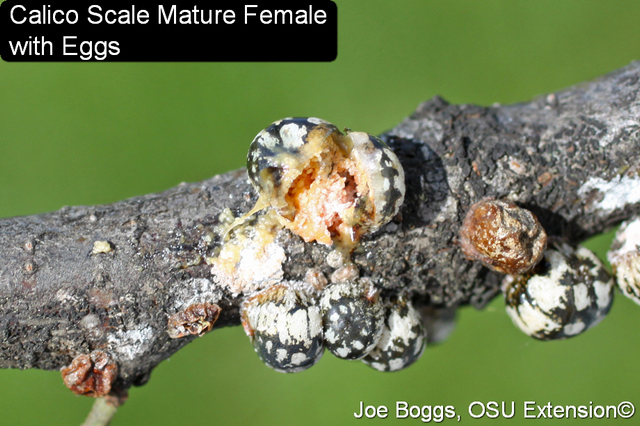 Calico scale females die, turn reddish-brown, and appear to deflate after producing their eggs.  Dead females remain evident throughout the remainder of the season and may give the false impression that control efforts such as an insecticide application were effective.  In fact, I've received pictures in the past of calico scale females that died of natural causes being perceived as proof that an insecticide application was effective. 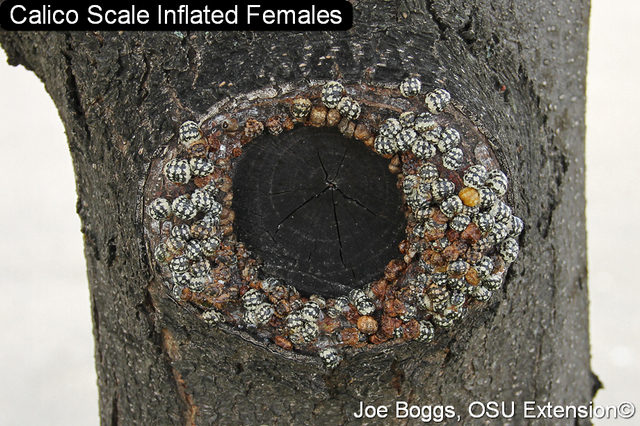 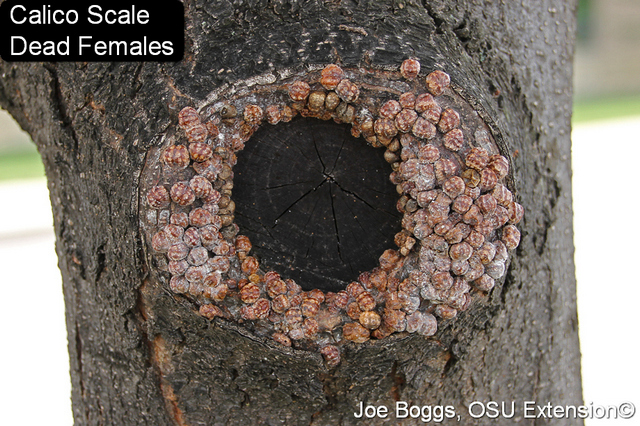 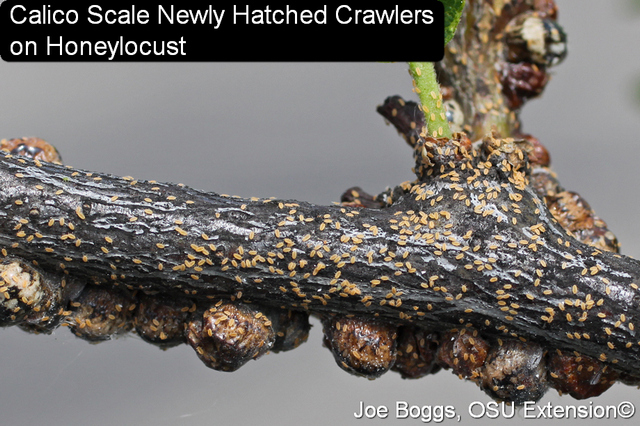 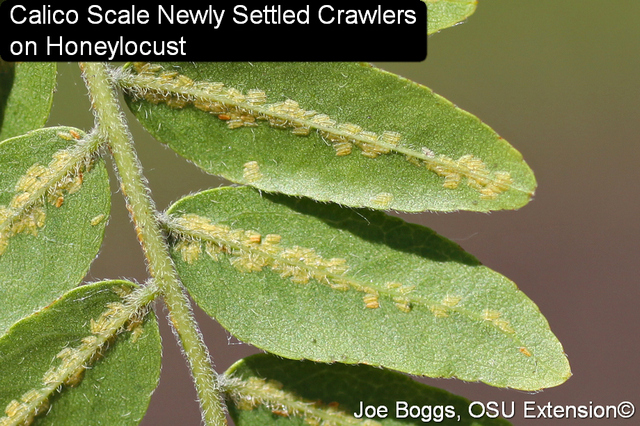 A Host of Calico Problems 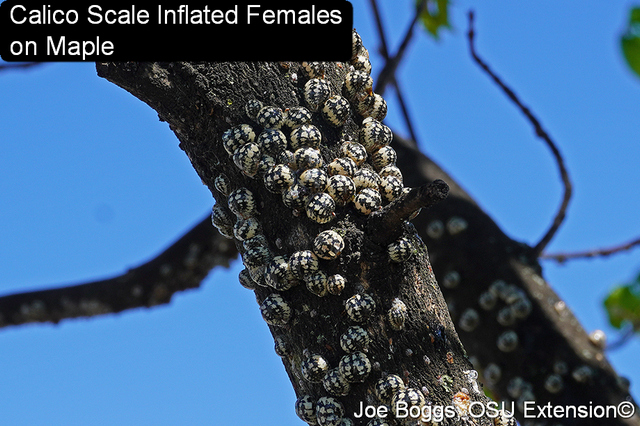 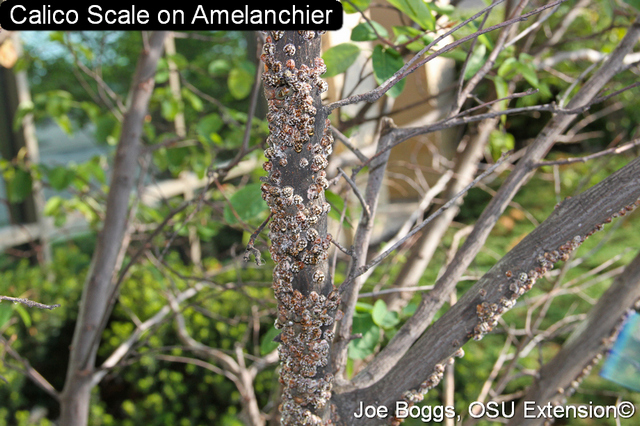 However, I’ve noted over the years that the range of preferred hosts seems to vary between geographical regions.  For example, the first time I saw calico scale was in Lexington, KY, and the primary host was hackberry.  However, without a doubt, honeylocust is the most common host in Greater Cincinnati followed by elm, particularly lacebark elm (Ulmus parvifolia).  I’ve yet to find it on hackberry in my neck of the woods. 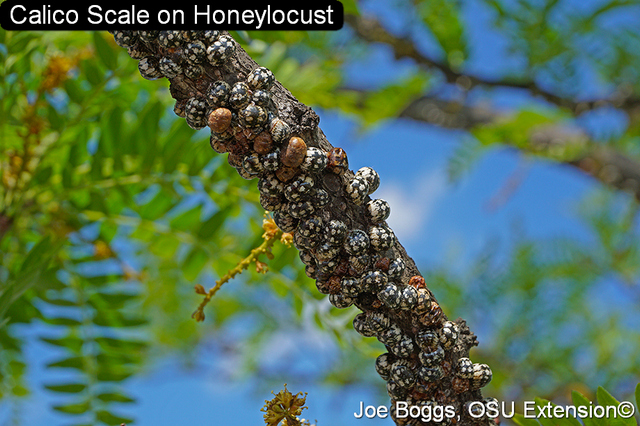 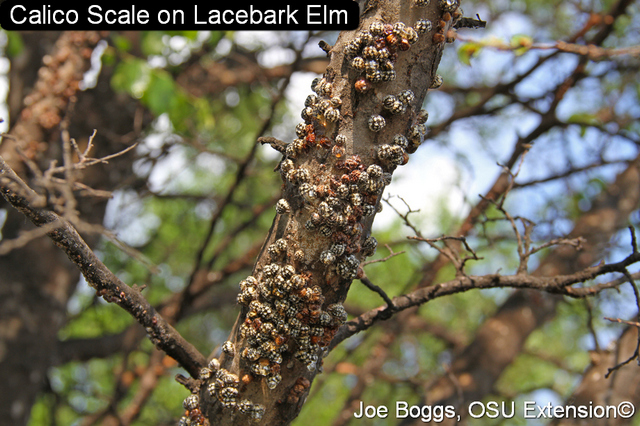 Unfortunately, calico scale management using insecticides can be problematic.  However, you can take advantage of their soft scale status to easily remove the soft, puffed-up females from plant stems using a scrubbing pad or scrub brush.  It's an effective management method for small trees and preserves natural bio-allies such as lady beetles and other predators that target this sucking insect. 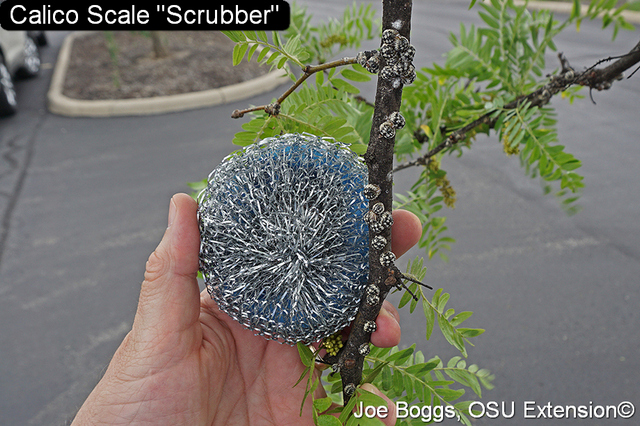 Fortunately, as with most soft scales, calico scale is seldom a direct killer of healthy established landscape trees.  However, heavily infested trees may suffer thinning canopies and branch dieback. 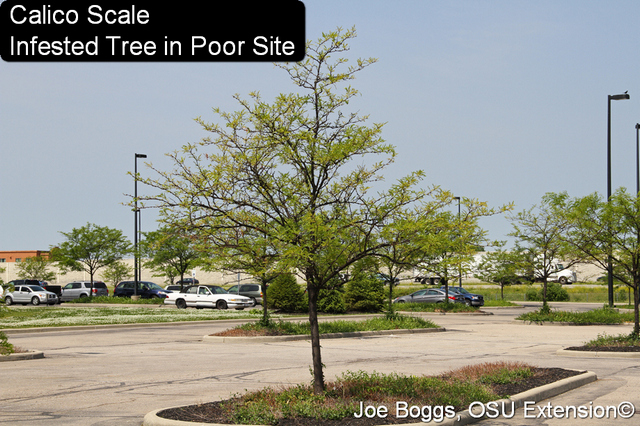 The accumulated chronic stress caused by substantial sap loss coupled with other stress-inducing conditions may kill trees.  Thus, the best first step in scale management is to resolve other issues that may affect overall tree health.  I've frequently observed large, heavily infested honeylocusts that are planted in good sites showing no obvious symptoms.  Just don't park your car beneath them. 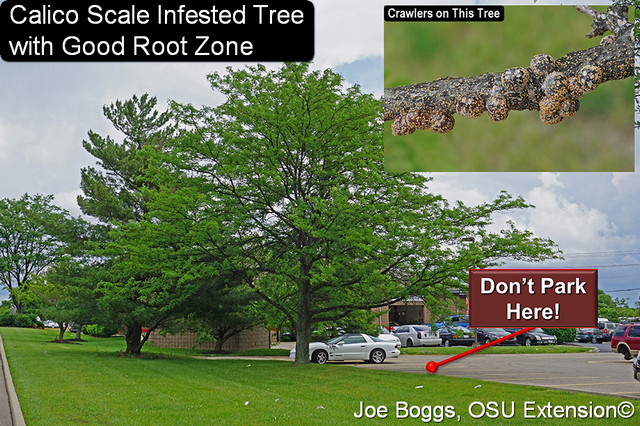