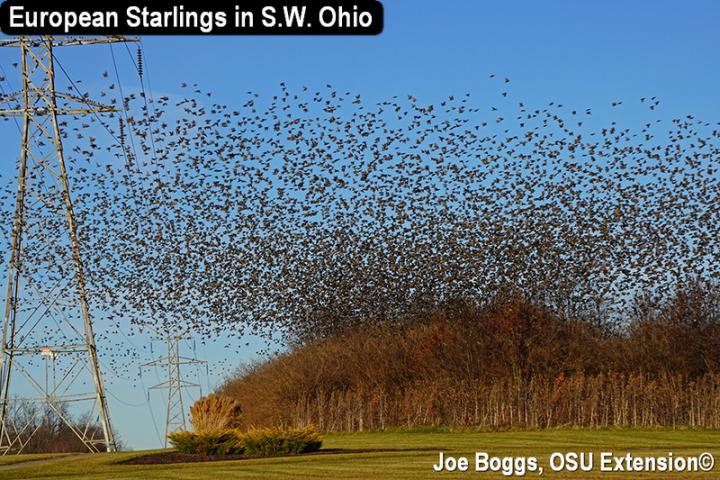 "Nay, I'll have a starling shall be taught to speak nothing but Mortimer, and give it to him to keep his anger still in motion." [Shakespeare, Henry IV, Act 1: Scene III]

I’m not a fan of the Common (European) Starling (Sturnus vulgaris).  They have long served as one of the many cautionary tales that illustrate the negative impacts of introducing non-native fauna into the U.S.  European starlings are also notorious for their sudden appearances in huge numbers that evoke Alfred Hitchcock’s 1963 film, The Birds. 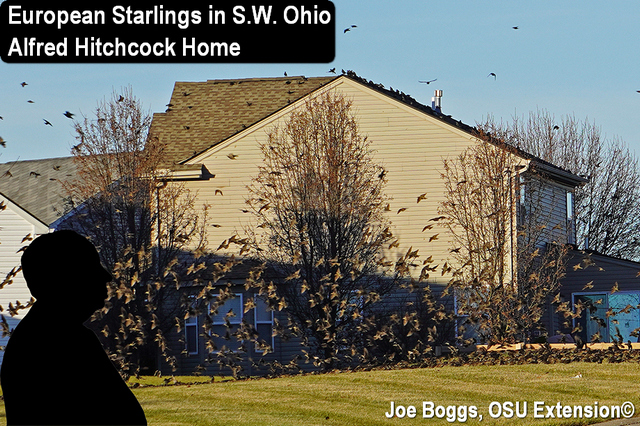 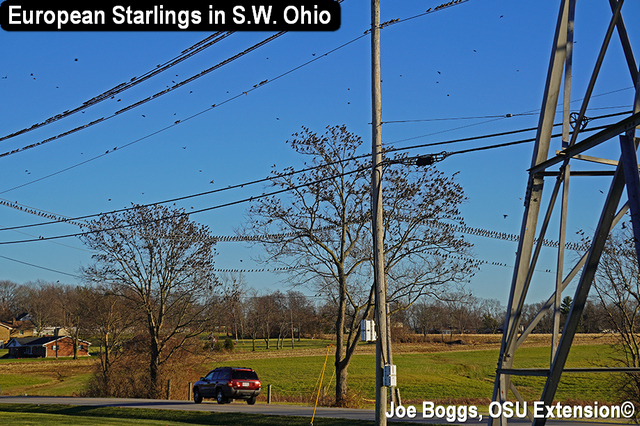 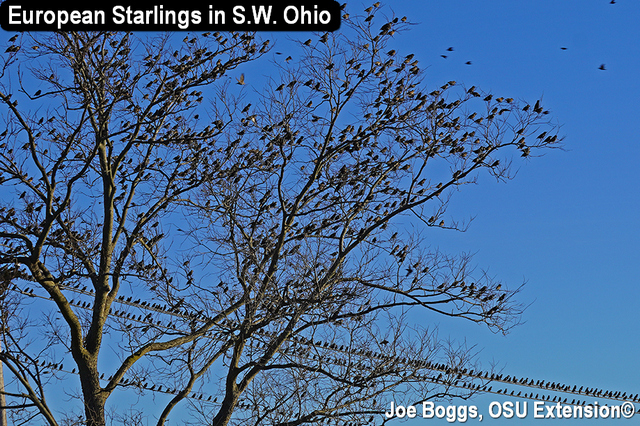 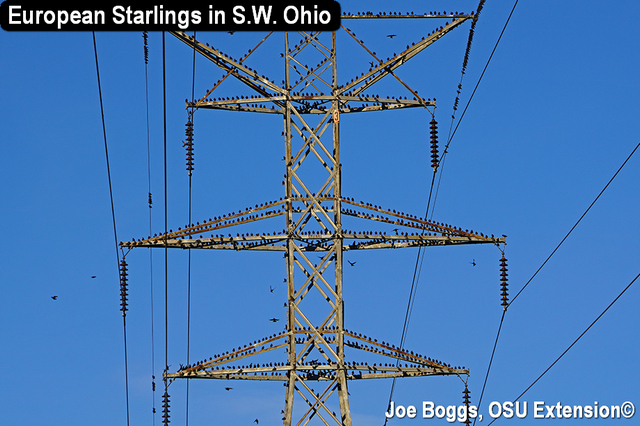 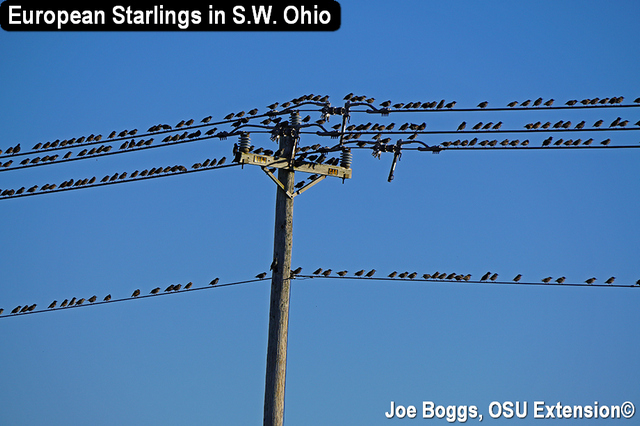 On the other hand, starlings were one of the few birds, both native and non-native, that I observed in late August feasting in large numbers on fall armyworm (Spodoptera frugiperda) pupae.  Few other birds joined the bug banquet in significant numbers. 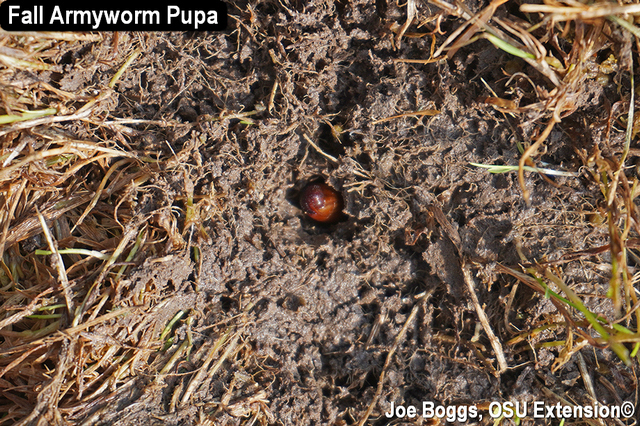 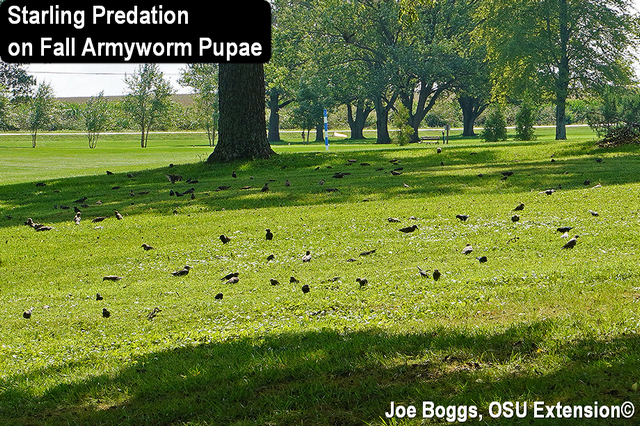 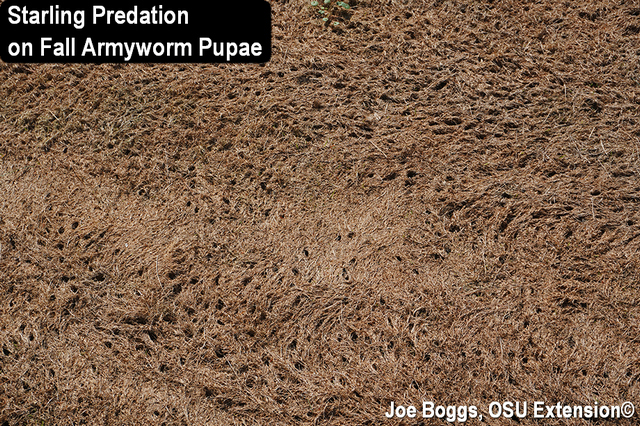 Earlier this week, I witnessed one of Nature’s most fascinating spectacles:  the swooping, swirling, synchronized aerial display of thousands of starlings flying in close formation.  The airborne acrobatics by European starlings are known as a murmuration.  They occur in the fall and sometimes in the spring when starlings gather in large numbers. 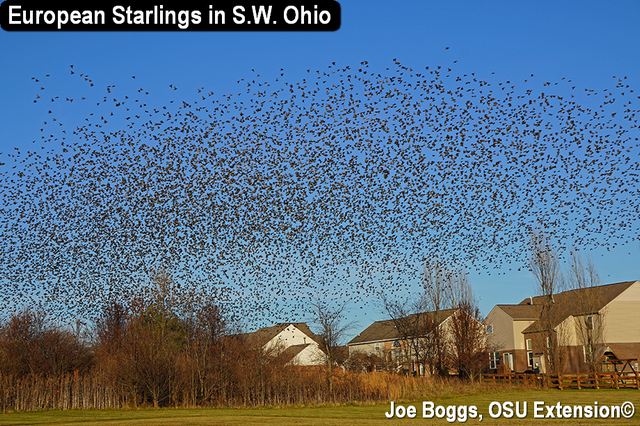 Murmuration is derived from the Medieval Latin murmuratio which means “murmuring” or “grumbling.”  Some references note the name is associated with the swishing sound made by thousands of wings as the birds whirl about in fast flight.  The fluid flights typically occur in the evening and others claim the name is drawn from rustling sound made by starlings as they settle in their collective roosting sites. 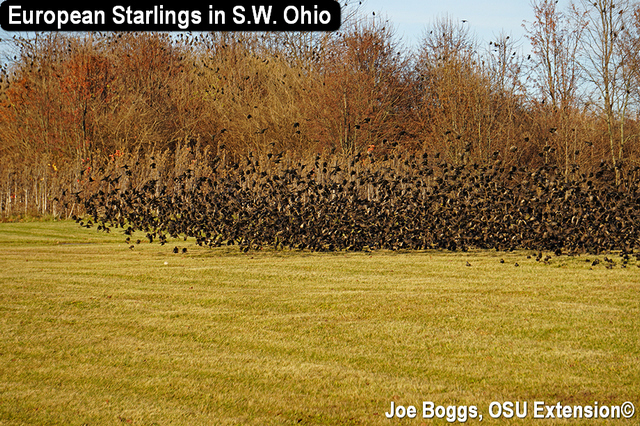 Regardless, I believe murmuration is a much nicer name for a collection of animals compared to a murder of crows, a deceit of lapwings, a conspiracy of lemurs, or a bloat of hippopotamuses.  However, it’s not as descriptive as a prickle of porcupines, a leap of leopards, or an ambush of tigers.

I posted a YouTube video of the starling murmuration and although it is not nearly as dramatic as other online postings of this bizarre phenomenon, you can view the video by clicking this hotlink:

The highly synchronous twisting and turning of the cloud-like black masses of huge numbers of starlings make murmurations appear as a single organism rather than a group of individuals.  It’s a stunning example of collective animal behavior. 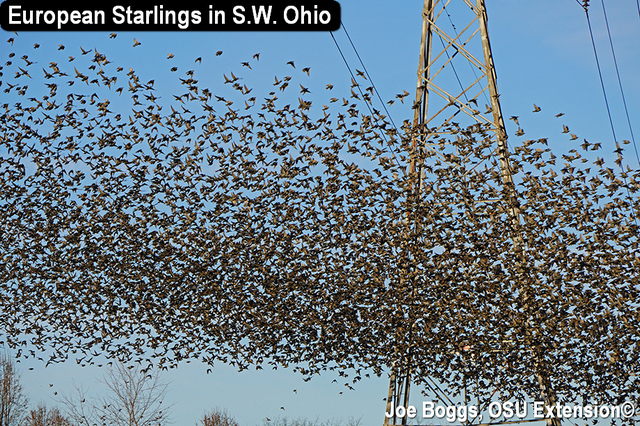 Murmurations have been the subject of spurious speculation as well as rigorous scientific studies.  The famed British ornithologist Edmund Selous speculated in the 1930s that the murmurations were guided by mental telepathy.  Although aluminum foil was available, there are no records of Selous fashioning tiny foil hats to test his hypothesis.

It is generally recognized that the “why” behind the murmurations is connected to reducing the success of predators.  Animal behaviorists have long recognized the value of mass animal movements to confuse predators. 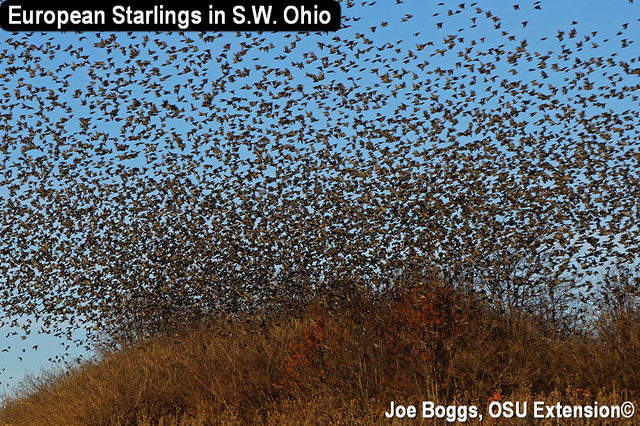 Much of the research into “how” starlings behave in their murmurations has relied heavily on high-resolution photographs and videos.  The analyses and computer modeling have revealed several important details.

It was learned early on that murmurations aren’t guided by a single lead bird like a bandleader or football quarterback.  Instead, the mass movements are guided by the decisions made by individuals as they continuously monitor the movements of 6 to 7 birds that surround them.

Each bird is making decisions based on three zones: attraction zone, repulsion zone, and angular alignment zone.  The attraction zone is where each bird moves forward towards the bird in front of them.  The repulsion zone is where birds avoid flying in the same lanes as other birds in their vicinity.  The angular alignment zone is the exact location maintained by each bird making constant flight adjustments based on keeping an eye on the 6 to 7 birds in their immediate vicinity. 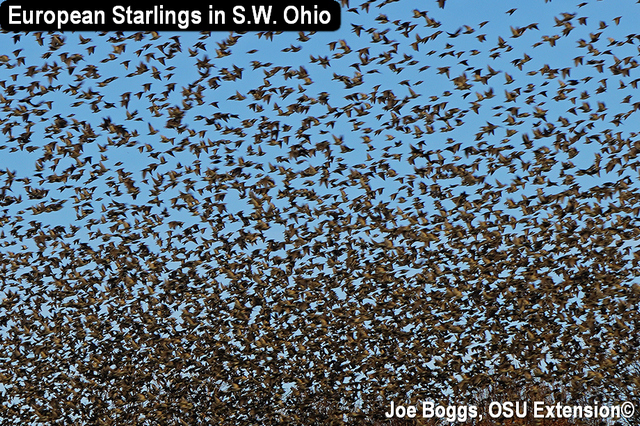 This individual-based “guidance system” means there is no need for large-scale instantaneous group communication (e.g., mental telepathy).  However, the lack of a lead bird or birds tasked with monitoring the “big picture” means things can occasionally go horribly wrong.

On September 14, 2018, 42 starlings were observed flying into a concrete road in British Columbia, Canada.  On December 11, 2019, 225 starlings were found lying motionless on a road in North Wales, Great Britain.  A post mortem revealed the birds had died from “blunt force trauma.”

In aviation accident investigations, if a perfectly functional aircraft is flown into the ground, it’s called controlled flight into terrain (CFIT).  CFIT, which is ironically pronounced “see-fit,” occasionally occurred with close-formation flying before modern avionics were developed to assess the “big picture.”  On August 15, 1939, thirteen German Junkers Ju 87s (Stukas) followed their flight leader into the ground during a dive-bombing demonstration in front of Army and Luftwaffe officers.

Thus far, research results into the “how” behind starling murmurations have produced computer models used to enhance lifelike animations in movies.  The simulations are also being investigated to control everything from large groups of robots to swarms of self-driving cars.  Of course, no doubt researchers are seeing fit to cast a wary eye towards CFIT.

1. Shakespeare mentions 66 different species of birds including starlings in his plays and poetry.  However, he only mentions starlings once.

2. European starlings were introduced into the U.S. in the 1800s through multiple releases from which they went forth and multiplied.

3. Eugene Schieffelin was a member of the American Acclimatization Society and he helped to introduce non-native birds into the U.S. including starlings.

These three facts have become interwoven into often-repeated narratives explaining how and why European starlings made their way into North America.  To see what I mean, do web searches using the couplets, “Schieffelin starlings,” and “Shakespeare starlings.”  Here are a few results:

“Over 100 years ago, Eugene Schieffelin set out to introduce every bird mentioned in Shakespeare's plays to America. Today, one of those birds is causing irreparable crop damage.” – Pacific Standard online magazine

“According to birding lore, two of America’s most invasive bird species were introduced by a misguided Shakespeare fan named Eugene Schieffelin.” – JSTORE Daily (“where news meets its scholarly match”)

“European Starling was originally introduced here by a group of well-meaning Shakespeare enthusiasts in 1880” – TheCornellLab, All About Birds

“In 1890, approximately 100 birds were brought to Central Park in an effort to have all birds mentioned in Shakespeare's work live in New York.” – American Museum of Natural History, SciCafe, Wednesday, December 2, 2020.

However, Fugate and Miller (2021) cast serious doubt on the often-repeated stories that there are direct connections between the three facts listed above.  They claim there is little evidence that Schieffelin played a significant role in the overall success of starlings in the U.S. and his often-claimed obsession with Shakespeare is a complete fabrication.  Thus, there is no evidence he had a goal of releasing every bird mentioned by Shakespeare.

Although Schieffelin was involved in the release of starlings into New York City’s Central Park in 1890 and 1891, these were not the first releases of starlings in North America.  In fact, they were among the last.  Releases had been going on from Ohio to Oregon for decades before starlings were released in Central Park.  Indeed, Fugate and Miller cite as an example the releases of thousands of European birds including starlings in Cincinnati between 1872 and 1874 by the Society of the Acclimatization of Birds.  Apparently, no one was quoting Shakespeare when the cages were opened.

Understanding the goals of Acclimitazation Societies may be key to unraveling the tenuous link between starlings in the U.S. and Shakespeare.  These societies were largely populated by European transplants to the U.S.  They were most familiar with European flora and fauna but much less familiar with the ecological value of plants and animals native to North America.

One of the well-meaning goals of the Societies was to import European flora and fauna to benefit agriculture in the U.S.  The birds were imported and released in Cincinnati to combat an outbreak of tree defoliating caterpillars.  Another reported goal by these Societies across the U.S. was to introduce European animals and plants that were familiar to European ex-pats.

Of course, given that Shakespeare was based in Europe, it stands to reason that Acclimation Societies would cast their importing eyes on many of the same birds mentioned by Shakespeare including starlings.  Thus, the supposed connection may be nothing more than a coincidence.

The starling story has become a cautionary tale.  However, it’s important to separate fact from fiction in historical accounts.

Sadly, Eugene Schieffelin continues to play the Bogeyman in the starling story.  Click on the hotlink below to his “Find a Grave” webpage and read the summary of his life as well as the snarky “Latest Memories of Eugene Schieffelin.”