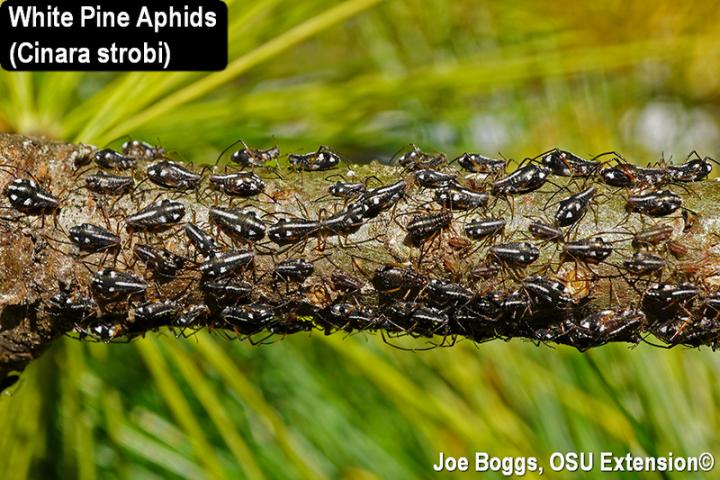 White Pine Aphids (Cinara strobi, family Aphididae) are specific to their namesake host, Eastern White Pine (Pinus strobus).  These conifer aphids may be found on the stems of white pines anywhere the trees are grown. 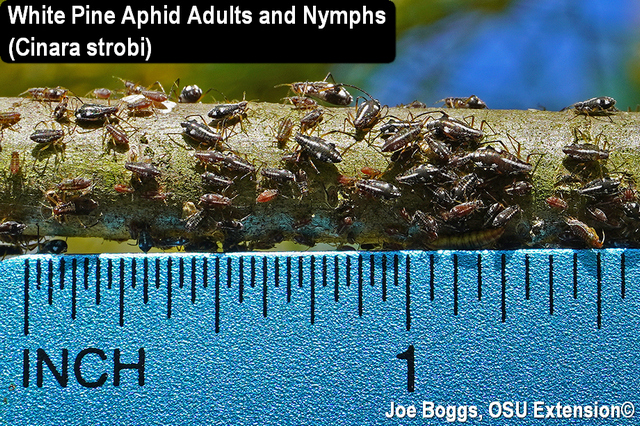 Although white pine aphids have multiple generations in Ohio with each generation composed of a progressively larger number of aphids, they usually remain below our radar throughout most of the growing season.  However, we are sometimes treated to huge hordes of these aphids that “suddenly appear” in the fall. 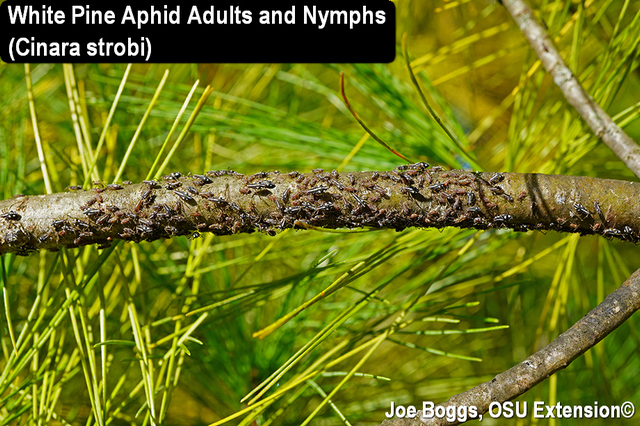 Unfortunately, late-season outbreaks of white pine aphids may coincide with the normal loss of last season’s needles.  This can give the false impression the aphids are causing significant harm.  Indeed, the pictures used in this Alert were taken yesterday on an eastern white pine undergoing normal seasonal needle loss.  The aphids had nothing to do with the dramatic appearance of chlorotic needles. 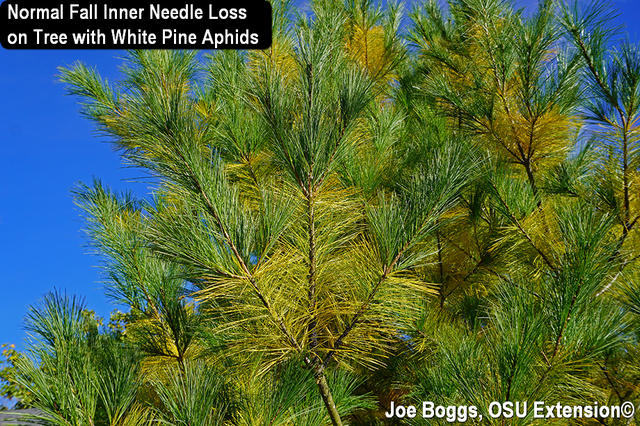 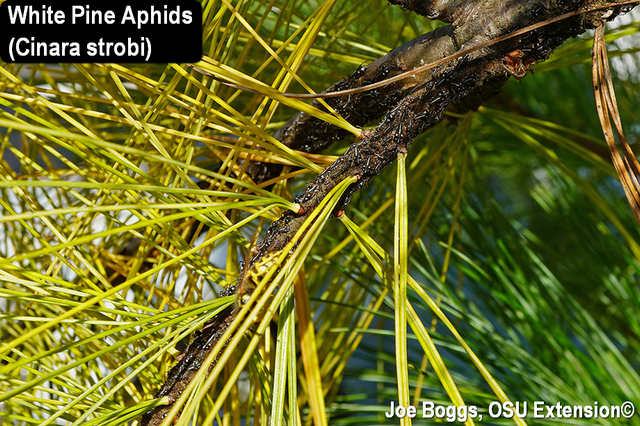 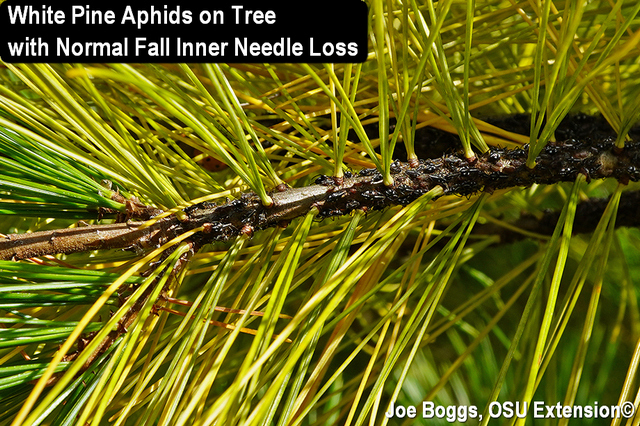 The late-season population explosion is the result of this aphid’s ability to skip or compress several steps in their life cycle.  This reduces the time required to complete each generation.

The first trick this aphid has up its six sleeves starts with summer generations being composed entirely of females; there are no males.  This type of asexual reproduction is called parthenogenesis and it means females don’t need to spend time getting acquainted with males.

The second trick is that white pine aphid females don’t lay eggs.  They skip the time required to produce eggs and for the eggs to hatch which increases the survival rate of their progeny.  Most insects are oviparous meaning they lay eggs that are at constant risk of being eaten until they hatch.  White pine aphid females are viviparous which means they give “birth” to nymphs and the nymphs are capable of hitting the ground running, literally. 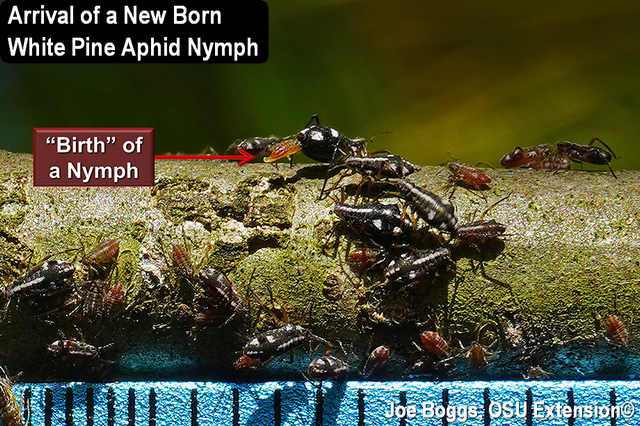 Their final trick is more subtle.  The nymphs that are pumped out of the parthenogenetic females already have inside their bodies the embryos of future females.  They arrive armed with the essence of their granddaughters! 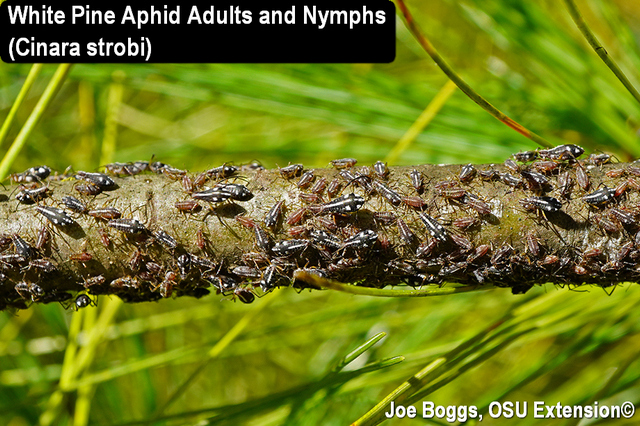 As with all aphids as well as planthoppers, froghoppers (= spittlebugs), soft scales, and mealybugs, white pine aphid adults and nymphs insert their piercing-sucking mouthparts into phloem vessels to withdraw sap.  Sap extraction is aided in aphids by a tiny pump-like organ located in their heads.  They withdraw both carbohydrates for energy and amino acids to build proteins.

However, the sugary sap contains a much higher percentage of carbohydrates by volume compared to amino acids meaning the aphids must remove a huge amount of sap to extract the amino acids required to meet their needs.  They discharge excess sap from their anus in the form of a sticky, sugary, clear liquid called honeydew; a polite name for the liquid aphid poo.

White pine aphids are notorious for raining large quantities of sweet sticky honeydew onto the needles and stems of their host tree as well as onto understory plants, sidewalks, parked cars, hapless gardeners, etc.  A dingy patina is added when the sugar coating becomes colonized by black sooty molds.  The sooty mold causes no harm; however, it can affect the aesthetics of heavily infested trees as well as lawn furniture. 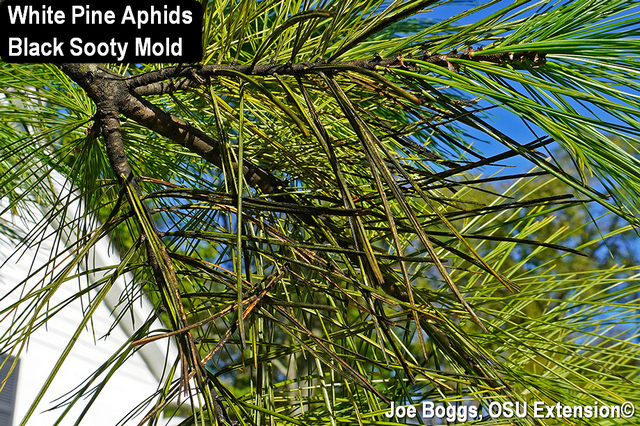 On a side note, it’s long been known that many animals, both large and small, cannot fully utilize their food without the help of microorganisms living in their gut.  Aphids are no exception with white pine aphids housing two bacteria:  Buchnera aphidicola and Serratia symbiotica.  These bacteria are obligate endosymbionts.  They have lost their ability to live outside of their aphid host and in return for a home, they process the sap extract to provide essential nutrients to their host.

It’s common for the sugary honeydew produced by aphids and other sap-sucking insects to attract various stinging insects including yellowjackets (Vespula spp. and Dolichovespula spp.), baldfaced hornets (D. maculata), and paper wasps (Polistes spp.).  Indeed, aphid infestations are often disclosed by the arrival of the stinging brigade.  Fortunately, these wasps are seldom aggressive since they aren’t defending their nest. 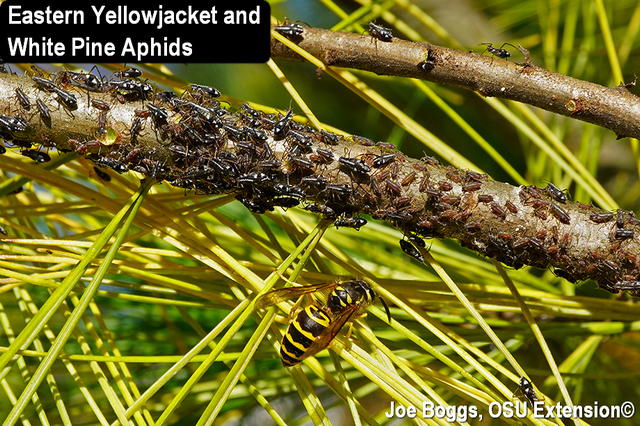 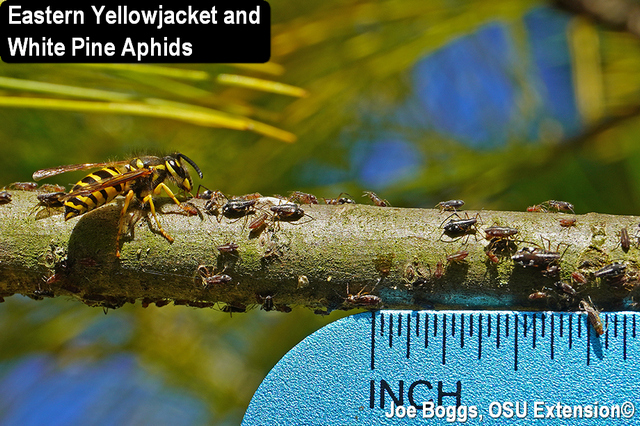 Although these predators may offer some protection against other predators, you can’t change a tiger’s stripes.  It’s also common for these predators to occasionally gobble up some of the aphids to have a little meat with their sugar. 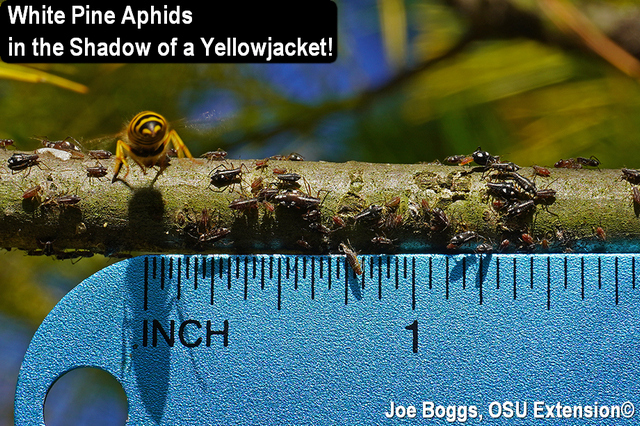 Ants on the other hand are much better aphid shepherds.  In exchange for an occasional sweet treat, ants provide security services by using their powerful mandibles to fend off predators bent on thinning their aphid herd.

White pine aphids seldom cause significant harm to the overall health of their conifer host.  Most online references note the most significant damage occurs on young trees particularly seedlings.  Established white pines are capable of hosting large numbers of aphids without being harmed.

Also, white pine aphid populations tend to rise and fall dramatically from year to year owing to the combined impact of predators, parasitoids, and pathogens (the 3-Ps).  Lady beetles and lacewing larvae were grazing on the aphids infesting the tree I visited yesterday. 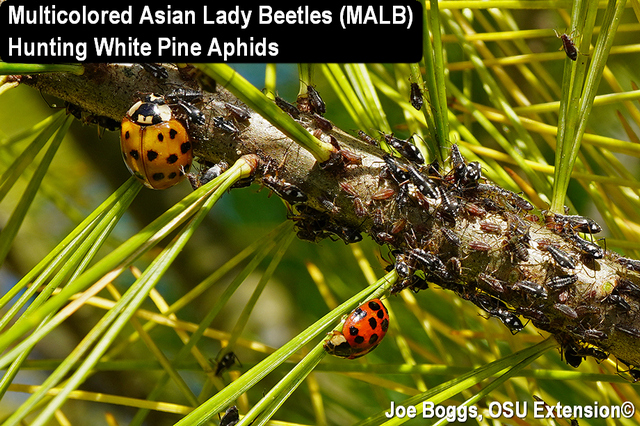 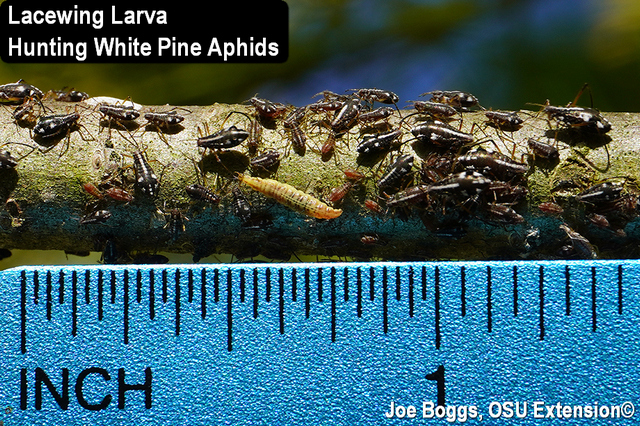 Thanks to the collective efforts of the 3-Ps, trees seldom suffer continuous sap-loss year after year.  Consequently, control measures are seldom warranted.

On a final note, the discovery of the Spotted Lanternfly (SLF) (Lycorma delicatula, family Fulgoridae) in Ohio has heightened the awareness of this non-native invasive sap-sucking insect.  The black and white color motif of white pine aphids mimics the color theme of early instar SLF nymphs.  The two insects look nothing alike when viewed side by side; however, it’s possible the two could be mistaken for one another if viewed separately, particularly with untrained eyes. 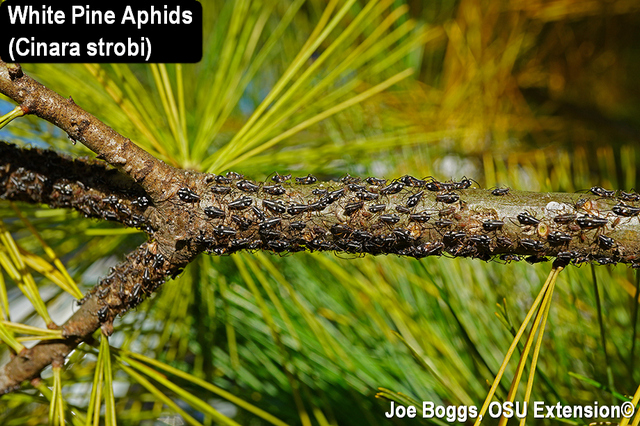 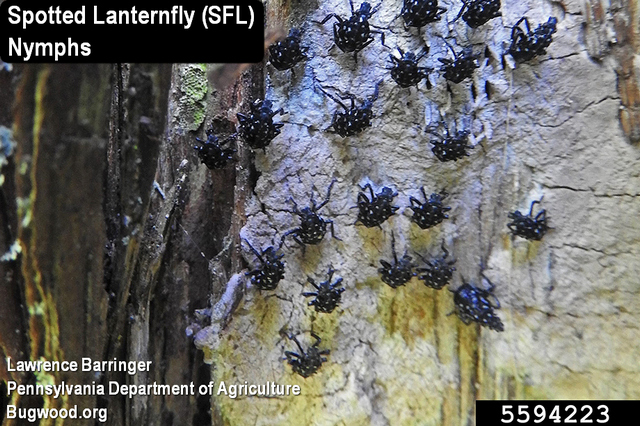