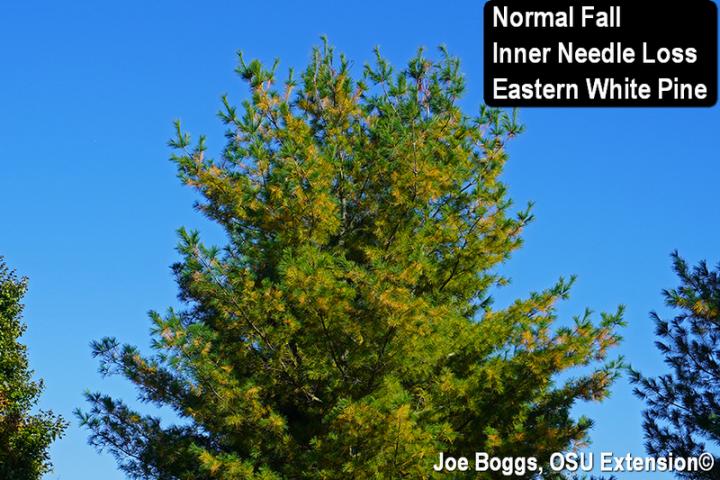 This is the time of the year when concerned landowners may ask, “what’s killing my white pines?”  It’s normal for Eastern white pines (Pinus strobus) and other conifers to shed their inner needles in the fall. 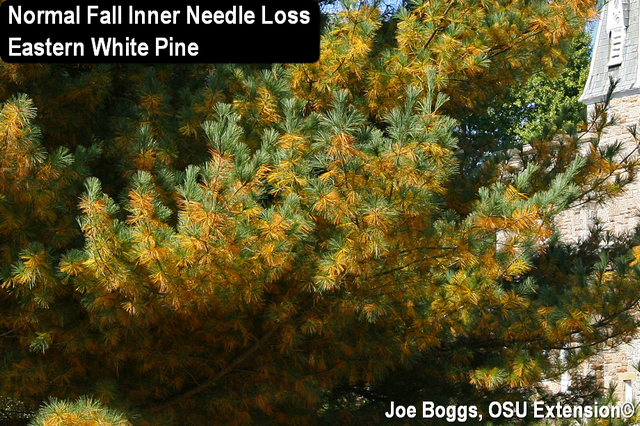 However, normal needle shedding can sometimes be dramatically synchronous with all the inner needles turning reddish-brown at once causing trees to look ragged.  This is particularly true for white pine trees.

It's important to ask exactly which needles are turning yellow and when did the color change occur.  For example, the only needles on an eastern white pine that turn yellow and shed at this time of the year are those on last season's growth.  The needles on this season’s growth remain a nice healthy green. 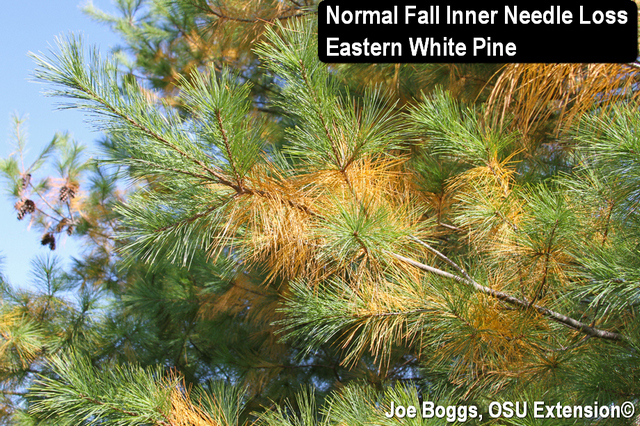 The same is true for other conifers although the pattern of the needle loss varies with the species.  It’s not always last year’s foliage.  However, I’ve paused more than once over the years to give pines and other conifers such as arborvitae (Thuja spp.) a closer look only to discover the browning is normal. 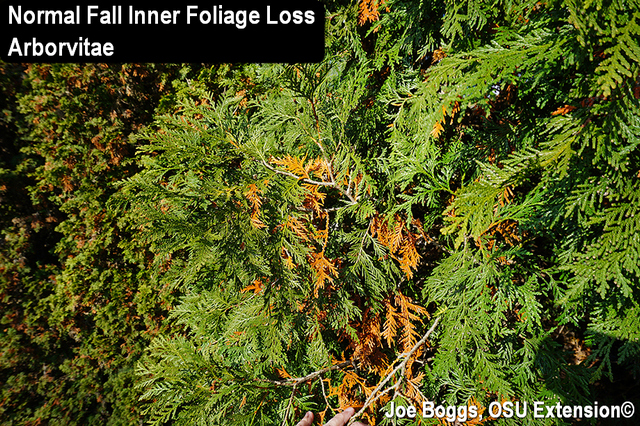 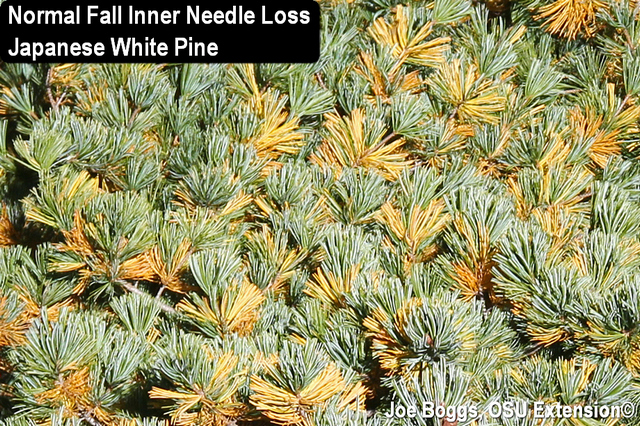 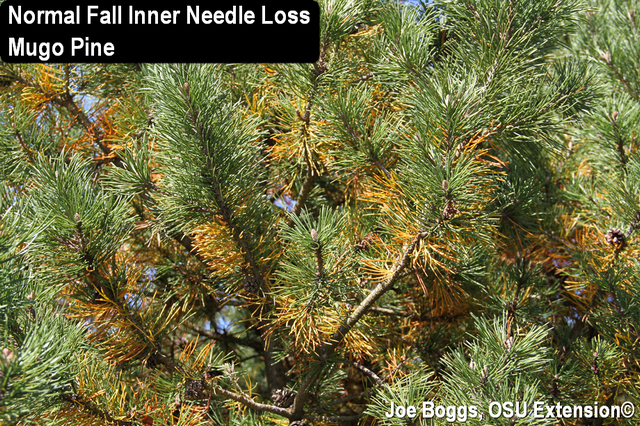 I could go on and on providing examples of normal late-season needle drop.  However, no one has ever topped the metaphorical explanation written by Aldo Leopold in his A Sand County Almanac:

"Pines have earned the reputation of being 'evergreen' by the same device that governments use to achieve the appearance of perpetuity: overlapping terms of office.  By taking on new needles on the new growth of each year, and discarding old needles at longer intervals, they have led the casual onlooker to believe that needles remain forever green."

"Each species of pine [and spruce, and fir, etc.] has its own constitution, which prescribes a term of office for needles appropriate for its way of life.  Thus the white pine retains its needles for a year and a half; the red and the jack pines for two years and a half.  Incoming needles take office each June and outgoing needles write their farewell addresses in October.  All write the same thing, in the same tawny yellow ink, which by November turns brown.  Then the needles fall, and are filed in the duff to enrich the wisdom of the stand.  It is this accumulated wisdom that hushes the footsteps of whoever walks under pines."

Leopold provides proof in his last two sentences that seasonal needle loss is indeed normal.  Otherwise, where did all the browned needles beneath white pines and other conifers come from? 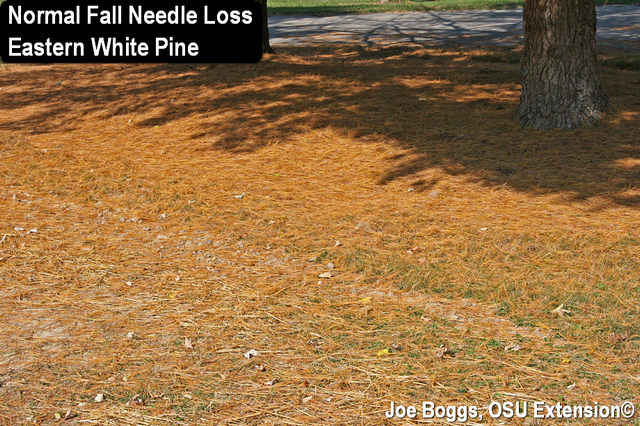 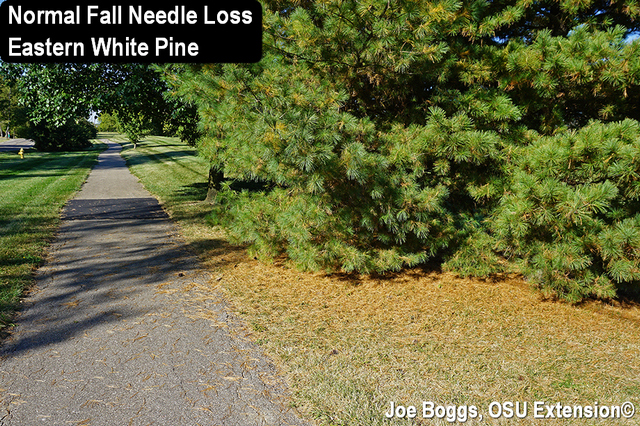 Of course, it’s always important to make certain the shedding is indeed normal.  Diagnosing plant problems over the phone is fraught with potential pitfalls and e-mail messages can be problematic if they do not include pictures.  Practice diagnostic due diligence and don’t jump to conclusions.

Abnormal needle shedding may be associated with site issues including poor soil conditions.  White pines and other conifers may struggle in Ohio where the soil pH is high (= alkaline) and/or where soils are poorly drained owing to high clay content or compaction or both.  Poor planting sites may also produce premature needle loss such as positioning Colorado blue spruce trees in non-irrigated parking lot tree wells and surrounding them with stone. 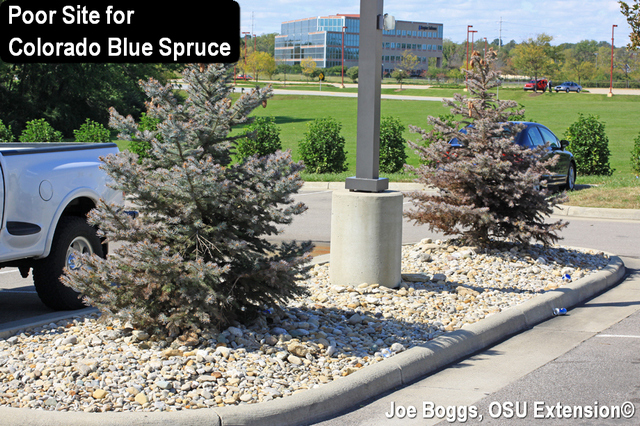 Several fungal diseases can also cause premature needle loss such as Rhizosphaera Needle Cast produced by the fungus Rhizosphaera kalkhoffii on Colorado blue spruce (Picea pungens).  Shedding the previous year’s needles in late summer to early fall was once a characteristic symptom of this disease.  However, in recent years, current needles are also being shed. 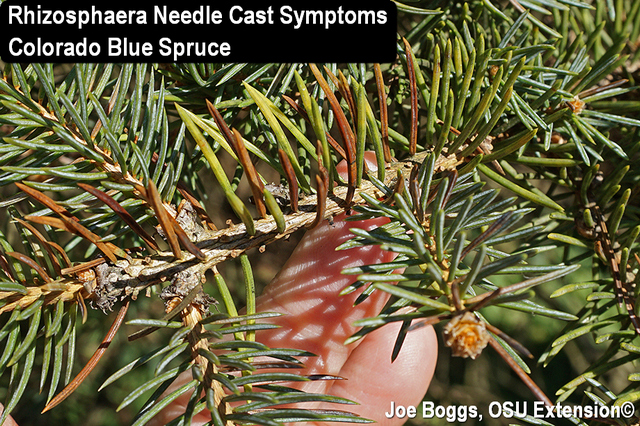 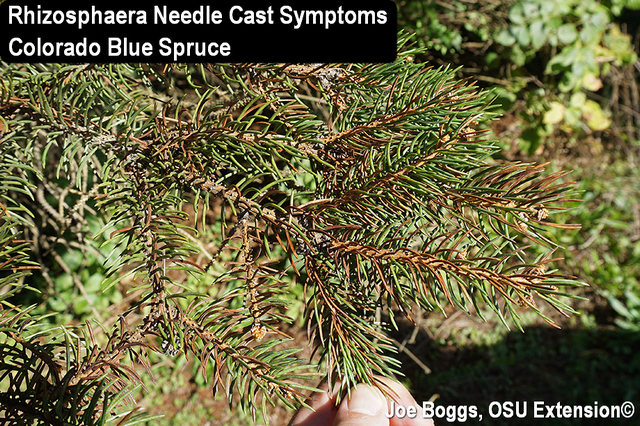 Whether this change in Rhizosphaera symptomology is due to a change in the fungus, a change in the host, or both is unknown.  Regardless, this needle cast disease coupled with Cytospora Canker caused by the fungus Leucostoma kunzei has produced a change in recommendations for the use of Colorado blue spruce in Ohio landscapes. 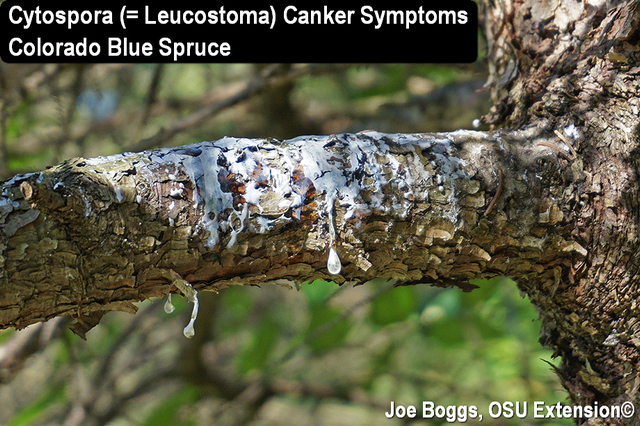 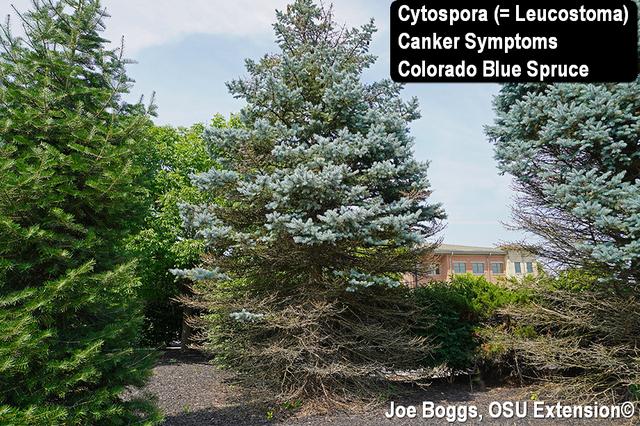 The same is true for Austrian pine (Pinus nigra).  Diplodia Tip Blight (= Sphaeropsis Tip Blight) produced by the fungus Diplodia pinea (= Sphaeropsis sapinea) and Dothistroma Needle Blight produced by the fungus Mycosphaerella pini have become so common on Austrian pine in the upper Midwest it’s resulted in this pine being removed from the list of recommended pines for use in Ohio landscapes. 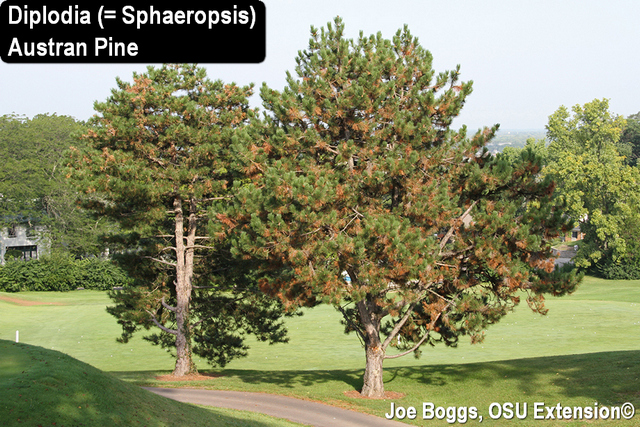 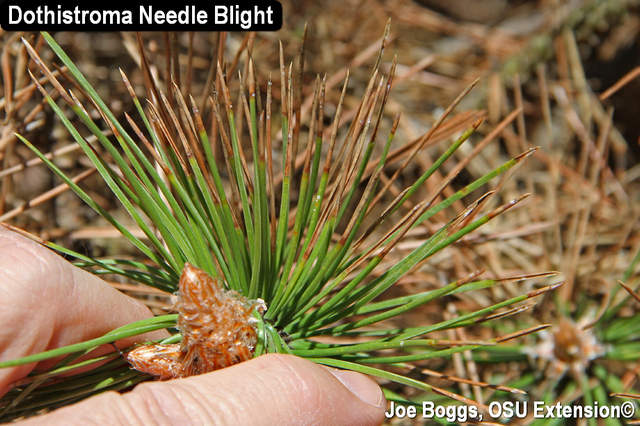