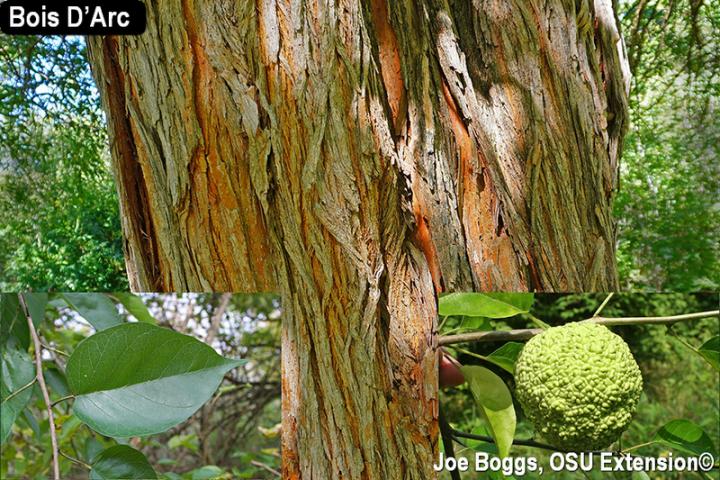 Bois D’Arc was the original name Europeans gave to Osage-orange (Maclura pomifera (family Moraceae (mulberry family)).  Other common names that have developed over time include mock-orange, hedge-apple, horse-apple, hedge balls, monkey balls, and monkey brains.  I’m not sure how monkeys crept into the name game. 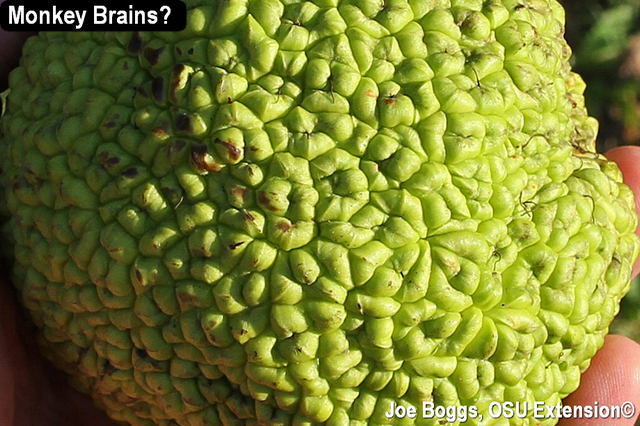 The native North American tree grows anywhere, has glossy, dark green foliage and deeply fissured orangish-tan bark with great winter interest.  What’s not to like?  Just don’t stand or park your car under female trees at this time of the year. 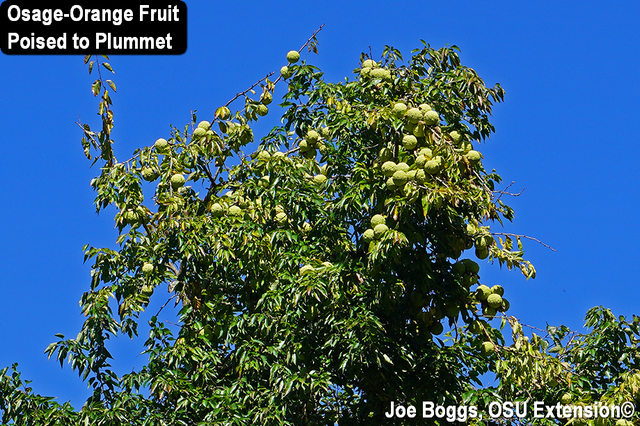 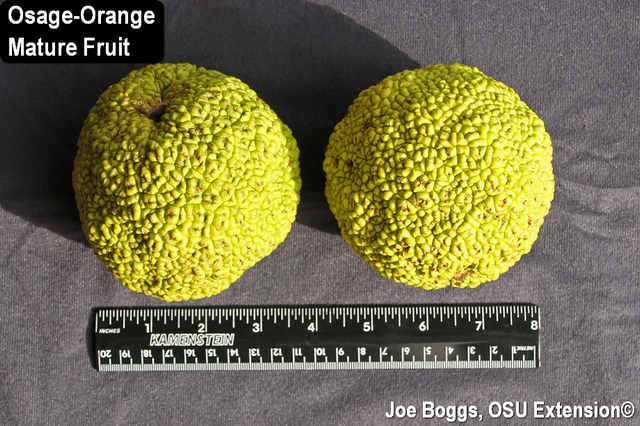 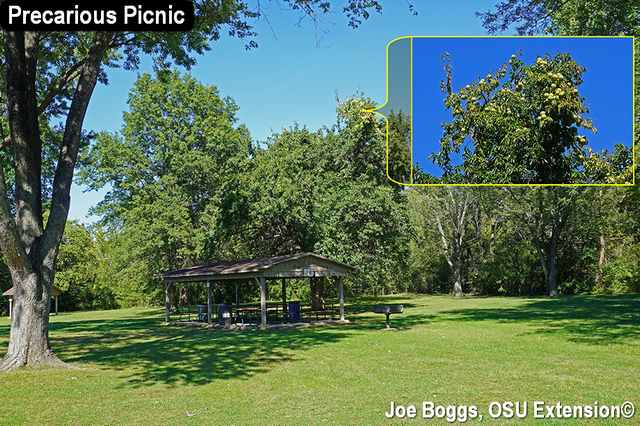 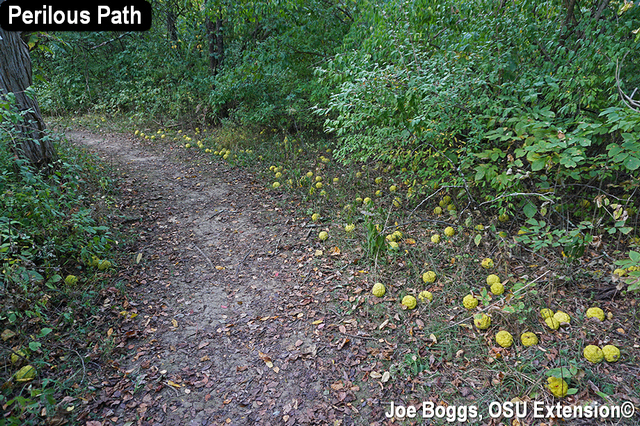 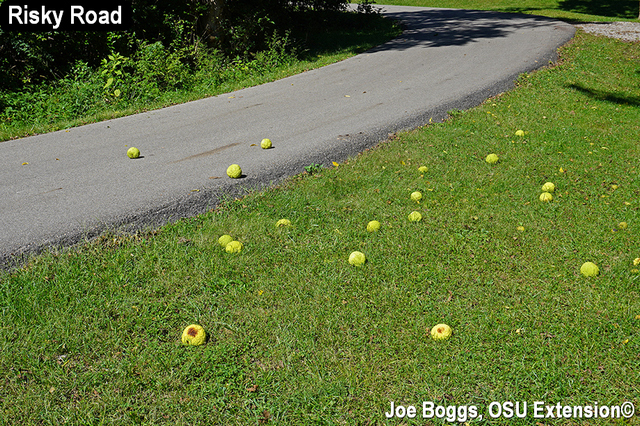 You can avoid the potentially head concussing or windshield smashing large fruits by selecting more mannerly cultivars. The prickly issue with menacing thorns can be solved by selecting "thornless" cultivars.  Two well-known male and thornless cultivars are 'White Shield' and 'Wichita.'  Finding these cultivars may be a challenge; however, they are worth the effort.  Taking that route can make this tough native tree a go-to for difficult urban sites.  Osage-orange trees are also relatively free of serious pest and disease problems. 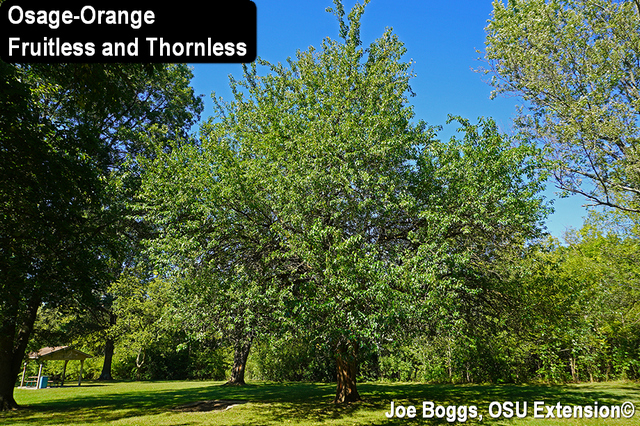 The scientific name Maclura pomifera (family Moraceae (mulberry family)) originated in 1907.  The genus honors William Maclure, a geologist who produced the first geological map of the U.S. and has been called the “father of American geology.”  The specific epithet is derived from the Latin meaning “fruit-bearing.” 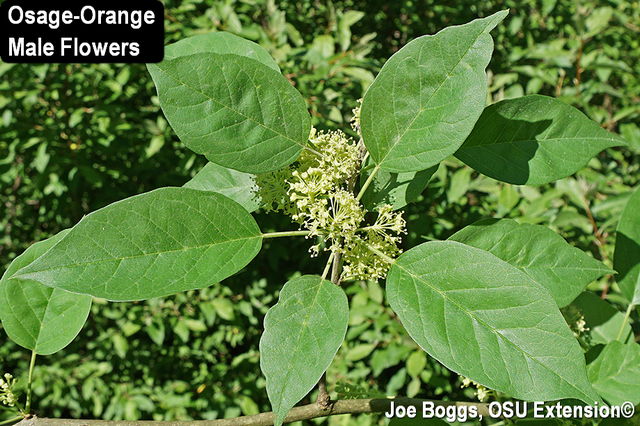 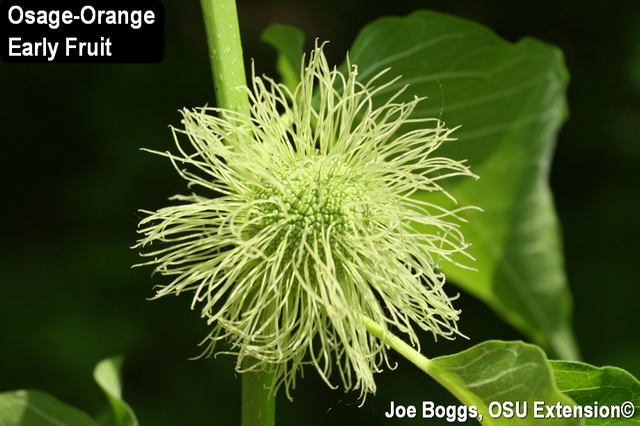 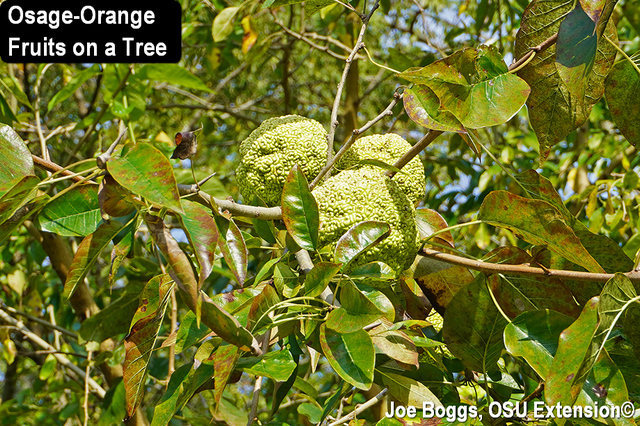 Maclura pomifera was not originally called “Osage-orange.”  In fact, the native Americans referenced in the tree’s name did not originally call themselves “Osage.”  The origin of that name is based on what the French thought they heard the tribe call themselves and then what the English thought they heard the French call the tribe.

Exactly what the Osage people called M. pomifera has been lost to history.  However, the French named the tree for what they saw the Osage people do with the wood.  The remarkable strength and elasticity of the wood made exceptional bows that were not only prized by the Osage, but also by other neighboring tribes. 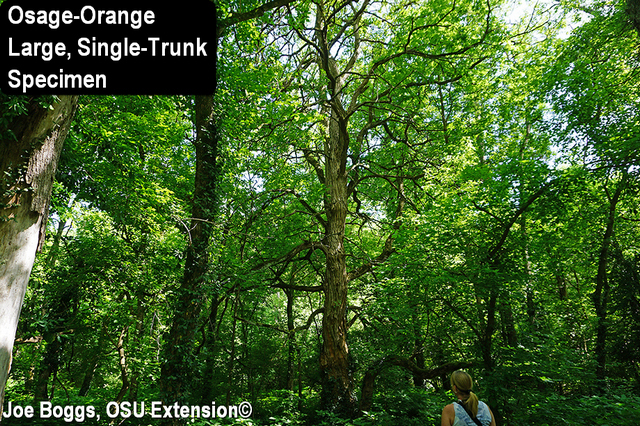 The French named the tree bois d’arc which means “bow-wood,” or “wood of the bow,” or “wooden bow,” depending on your reference source.  The common name “bobark” is based on what the Americans thought they heard the French call the tree.

Bois d’arc, or bobark trees, did not originally grow in the current relatively small native range confined to the eastern part of the Red River drainage watershed in Oklahoma, Texas, Arkansas, and perhaps extending into parts of Kansas, Louisiana, and Missouri.  M. pomifera as well as 7 other species in the genus were once widespread in North America before glaciers bulldozed most of them from the Earth.  M. pomifera is the only remaining member of the genus that lives on. 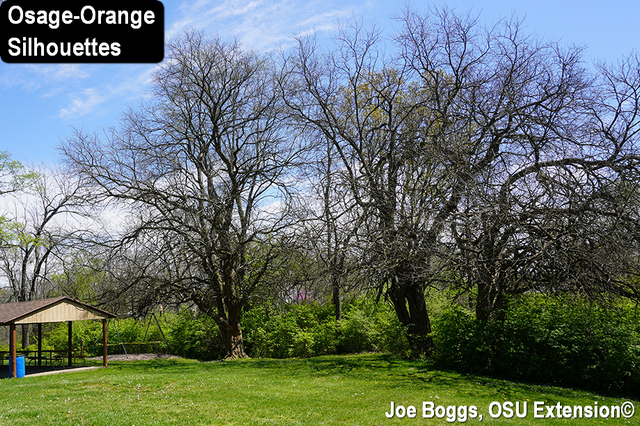 Of course, Osage-orange trees can now be found growing in all 48 contiguous states.  Its widespread distribution was supported by its use for several utilitarian purposes and its boundless adaptability to wide-ranging environmental conditions. 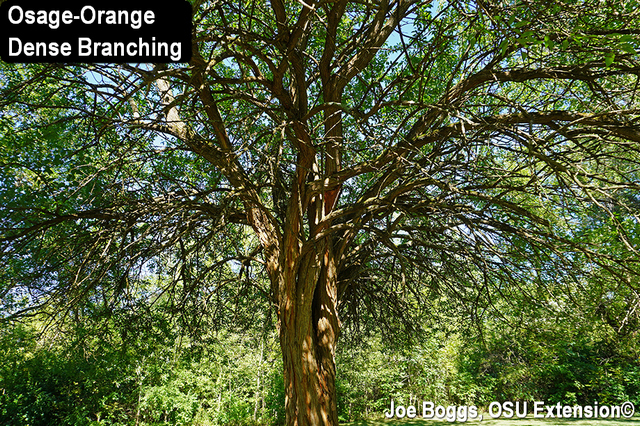 Trees were planted as living fences before the development of barbed wire.  Dense, crossing branches and sharp thorns growing from the leaf axils discouraged livestock from crossing close-planted hedges.  It was also one of the primary trees used in Works Progress Administration (WPA) programs aimed at preventing soil erosion.  Thousands of miles of Osage-orange shelterbelts were planted throughout the 1930s as part of WPA soil stabilization efforts.

Scholars were once puzzled by why there are so many trees in North America and elsewhere that expend a considerable amount of energy to produce large fruits containing seeds for which there are no current means of dispersal.  Osage-oranges hit the ground with a thud and remain there unless slopes and gravity cause them to roll away. 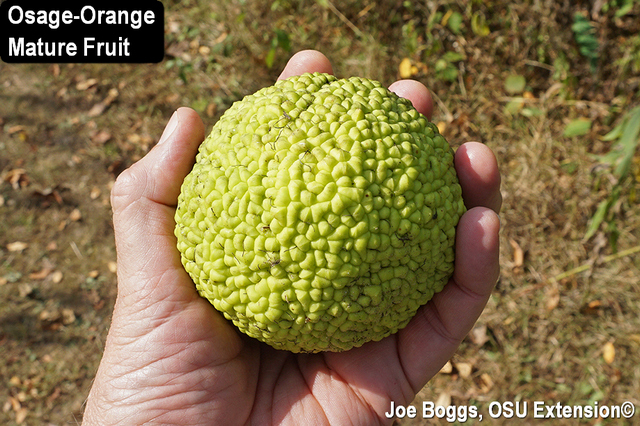 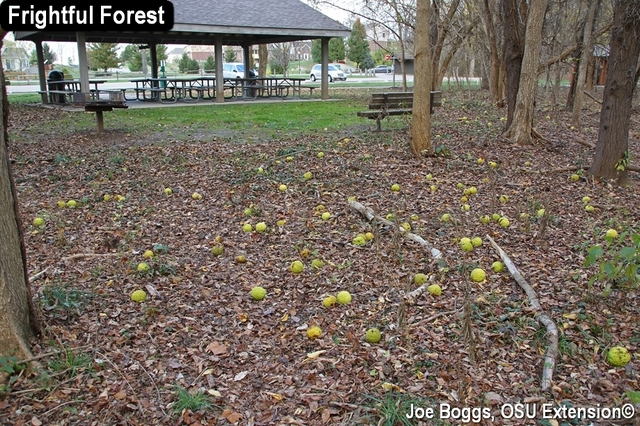 Although Osage-orange fruit and branches ooze a latex-like sap when cut, several studies have shown that the fruit is not poisonous to livestock, wildlife, or humans.  Horses will eat the fruit, but not as a preferred meal.  Cattle may eat Osage-oranges but have been known to choke on the large fruits.  Deer will nibble away at the outer flesh.  Squirrels will strip out the seeds, but they destroy the seeds as they consume the inner goodness.  There just isn’t anything alive that will snarf down the entire fruit in one gulp then redistribute the seed out of their other end. 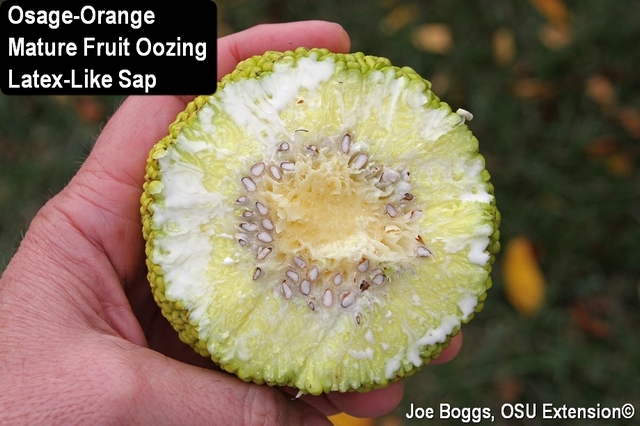 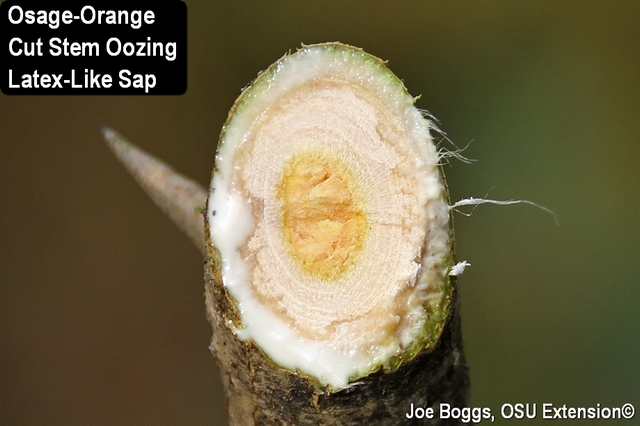 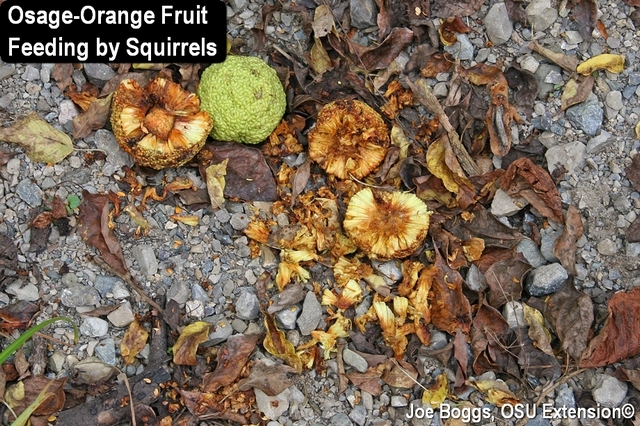 There are also no animals that gobble down whole pawpaws (Asimina triloba), Kentucky coffeetree seed pods (Gymnocladus dioicus), honeylocust seed pods (Gleditsia triacanthos), and avocados (Persea americana).  Pawpaw and avocado flesh tastes wonderful, but we don’t eat the entire fruit in one gulp and we don't eat the seeds. 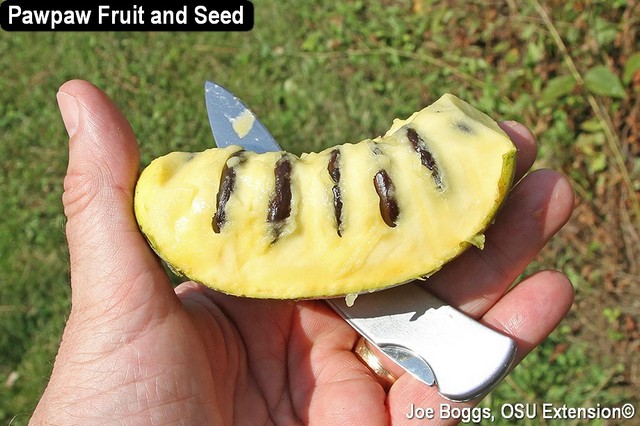 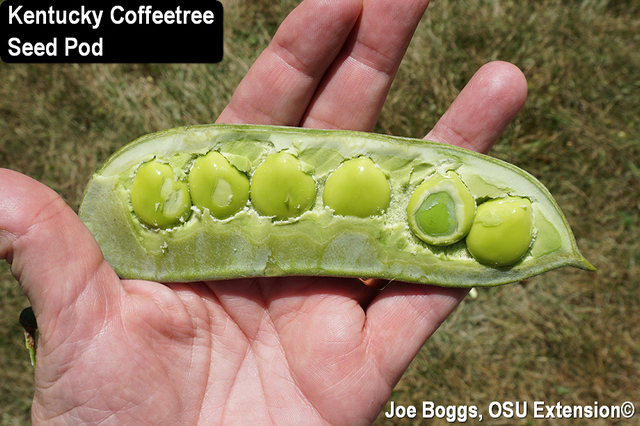 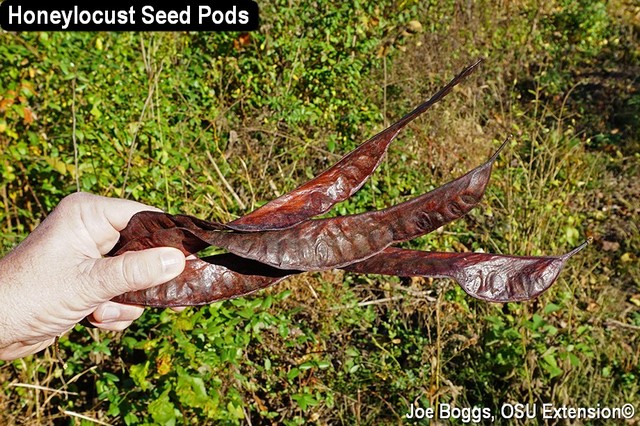 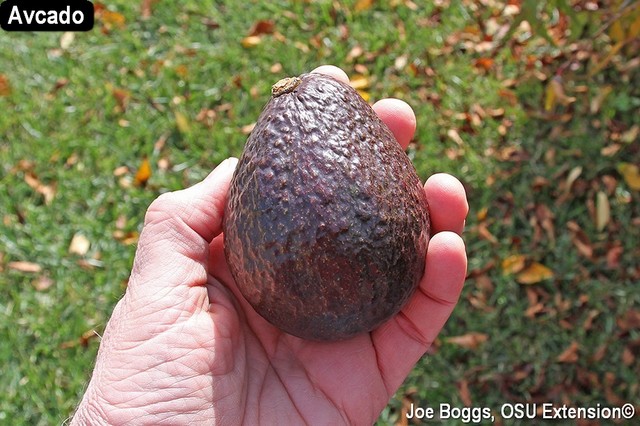 Why do Osage-orange trees and wild honeylocusts produce such wicked thorns when there’s no animal large enough to threaten the entire tree?  Indeed, the honeylocust specific epithet, triacanthos, translates to "three-parted thorns." 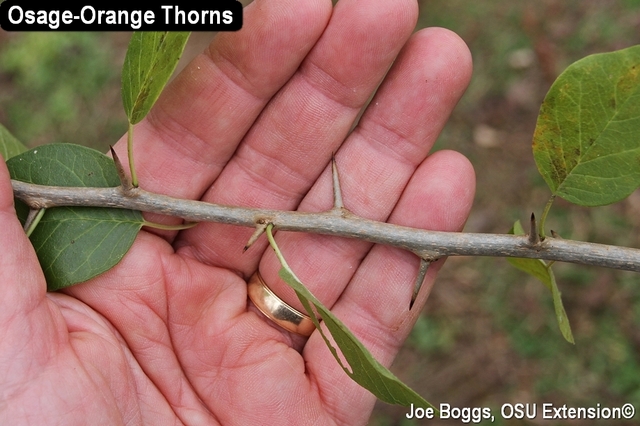 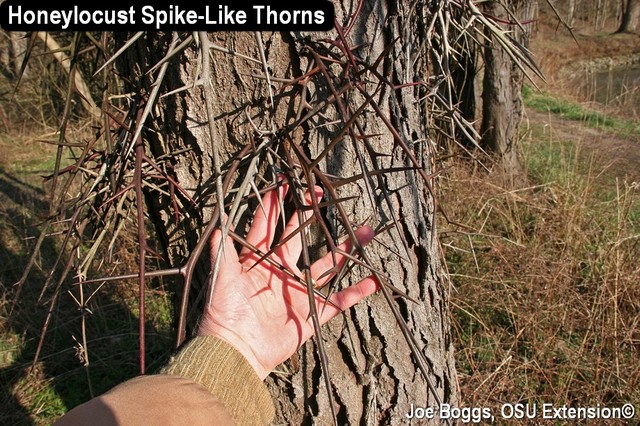 The big fruit and thorny defense puzzles can be solved if viewed in the proper context.  What we see now was shaped by animals that no longer exist; they are extinct.  Big fruits were for enticing big animals, megafauna.  Sharp spiky thorns were for keeping the big animals a branch length. 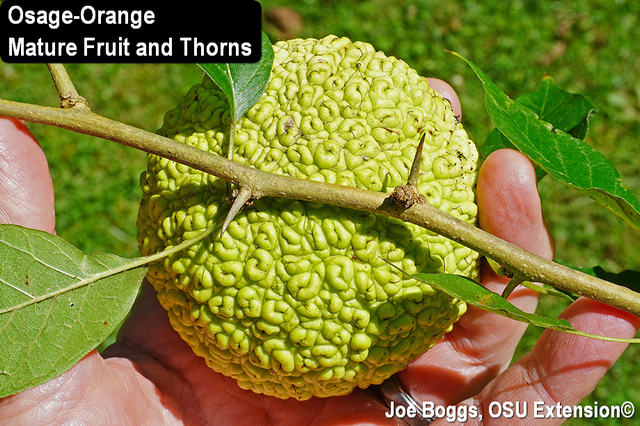 The megafauna left the North American scene relatively recently; somewhere between 13,000 and 9,000 years ago depending on the species and the location.  Indeed, our Neolithic ancestors witnessed the disappearances; perhaps they even had a hand in it.

The mega-extinction of megafauna was so recent that natural selection has not had time to reduce, modify, or erase many characteristics that once bestowed great coevolutionary rewards.  Consequently, many plants still live in the shadows of their extinct coevolutionary partners.

The trunks of honeylocusts are festooned with wickedly large thorns.  The spike-like thorns start a few feet above the ground and end at about the highest reach of a mischievous mastodon with the greatest concentration positioned for maximum protection.  Honeylocusts continue to adorn their trunks with huge thorns to defend against the phantom trunks of American mastodons. 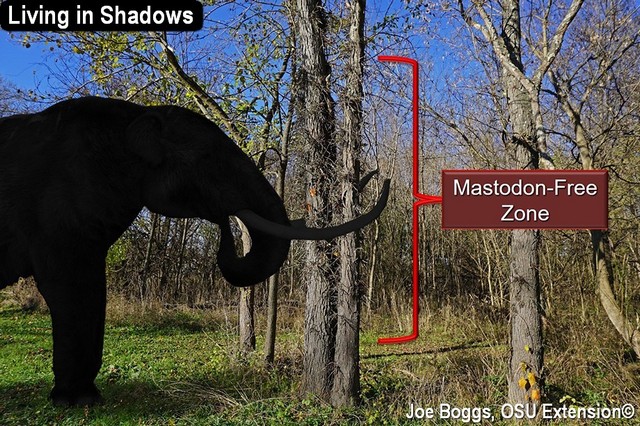 Osage-orange trees, Kentucky coffeetrees, and avocado trees continue to produce large seed packages in the expectation that some large animal will reward their efforts by pooping out their offspring in far-off locations.  You can thank giant sloths for having to deal with the huge avocado pits the next time you make guacamole. 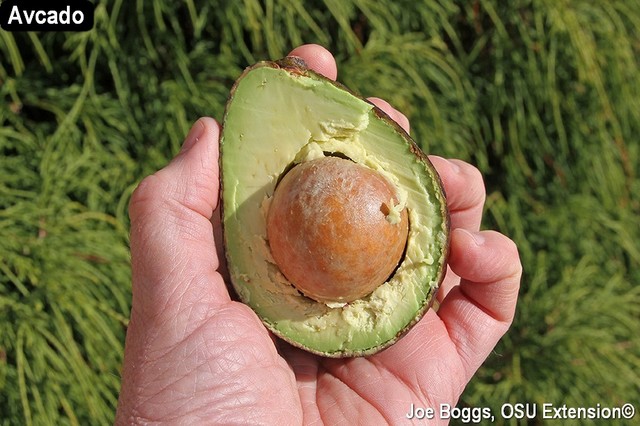 Several North American animals were also shaped by extinct coevolutionary partners.  No living North American predator can catch pronghorns (Antilocapra americana) as they sprint at more than 55 mph. However, their apparent waste of energy makes sense if you consider that they are still being chased by the ghosts of fleet-footed American cheetahs (Miracinonyx spp.).

There is no research evidence supporting the stubborn myth that Osage-orange fruit repels insects and spiders.  Researchers have found chemical compounds in the fruit that has some insect repellency properties; however, the natural concentrations of these compounds in the fruit are far too low to serve as an effective repellent.

On the other hand, as demonstrated below, throwing the fruit at insects and spiders can have an effect. 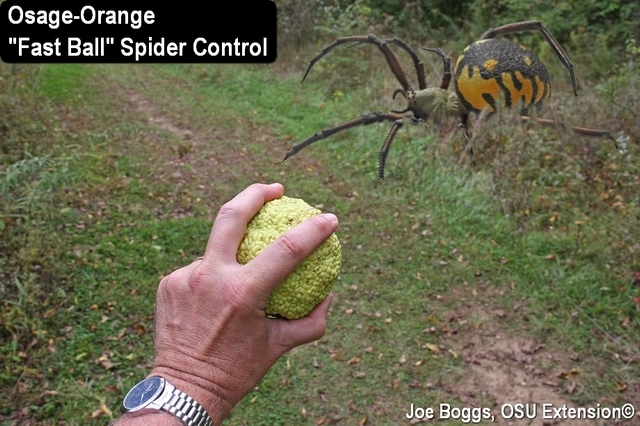