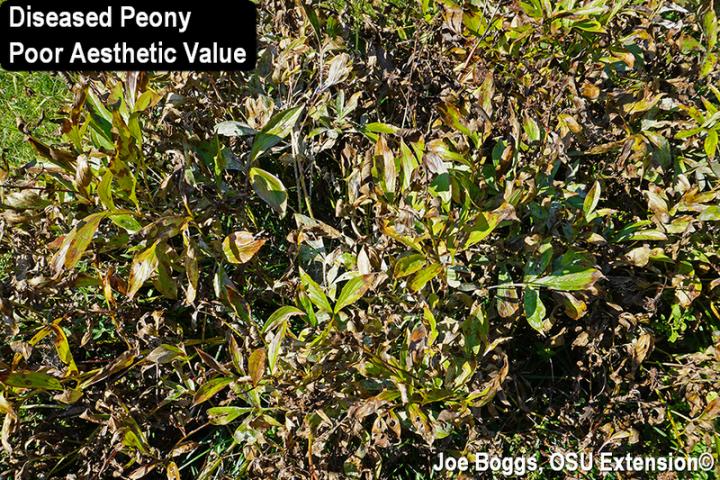 Garden Peonies (Paeonia spp.) have been used in Ohio landscapes for a long time.  It's not unusual to find clumps of these non-natives growing where old homes once stood.  However, this old group of perennial flowering plants has seen a resurgence in recent years. 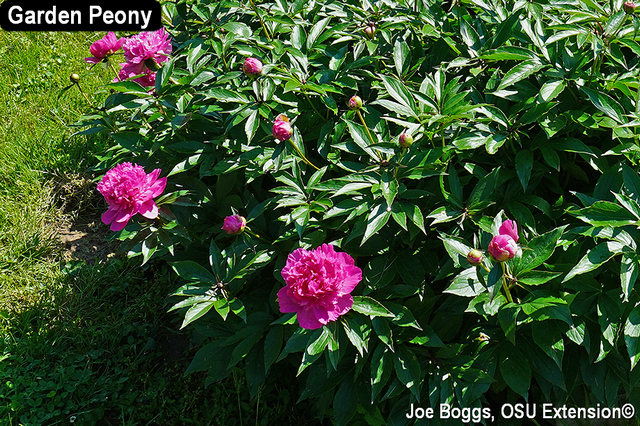 The taxonomy of these natives of Asia, Europe, and the western U.S. remains in flux. The exact number of species ranges from 25 to 40, depending on the taxonomic scheme; however, the current consensus is that there are 33 species.  There are both "woody" (= tree peonies) and herbaceous species (= garden peonies), but this Alert focuses on the herbaceous types.  It's an important distinction relative to management. 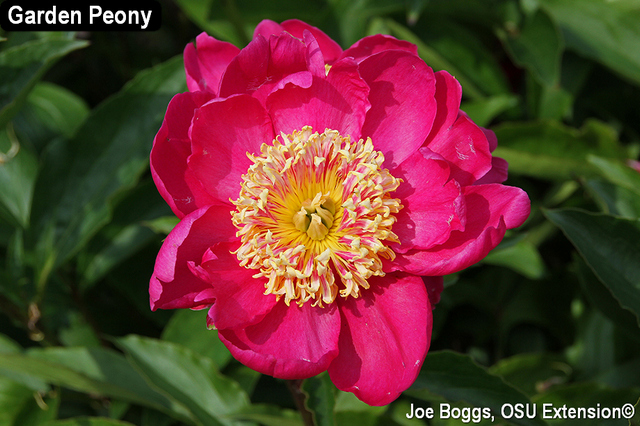 Garden peonies provide beautiful displays with their short, shrubby growth; dark glossy foliage (some species); and showy blooms even though the blooms may not last long.  Unfortunately, beautiful peony displays are sometimes marred by several diseases with the most notorious being Peony Leaf Blotch disease caused by the fungus Graphiopsis chlorocephala (formerly Cladosporium paeoniae).  The fungus is also responsible for producing other diseases with different common names depending on the symptoms. 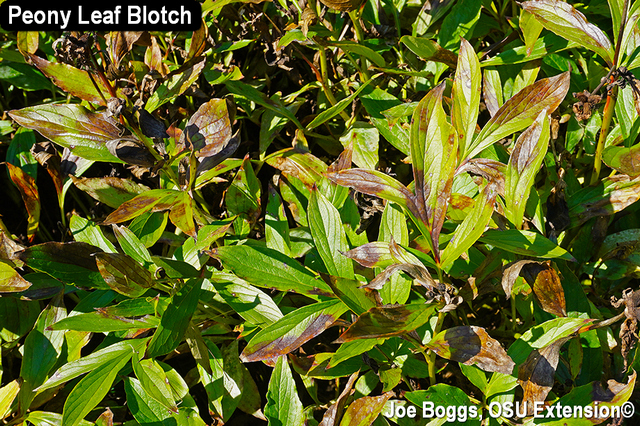 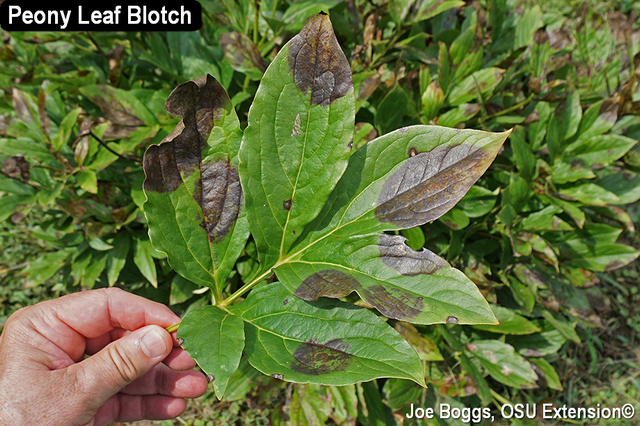 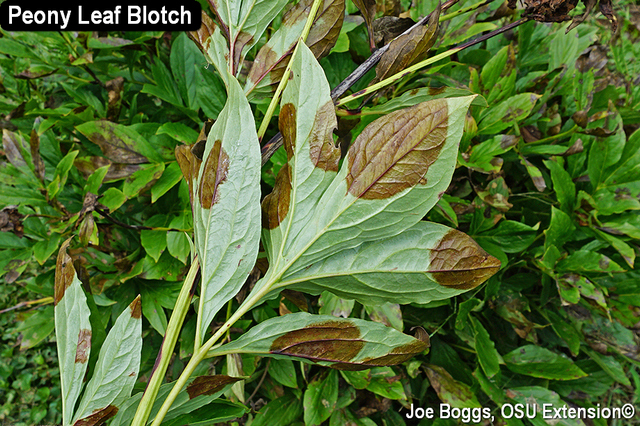 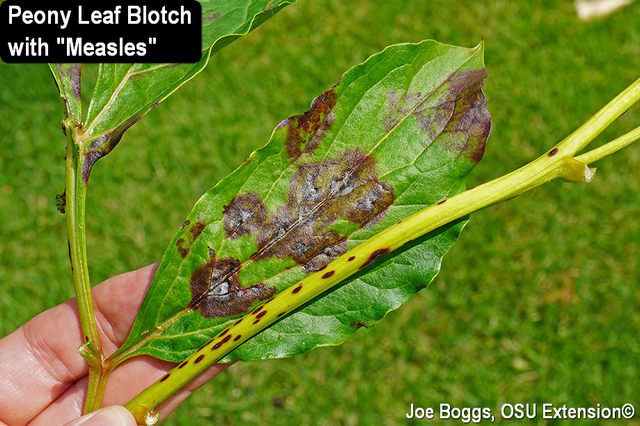 Peonies are also susceptible to up to 14 species of Botrytis including a gray mold fungus specific to peonies, B. paeoniae.  Indeed, research conducted at Washington State University as part of a Ph.D. thesis revealed that there may be as many as 9 additional undescribed Botrytis species found on peonies. 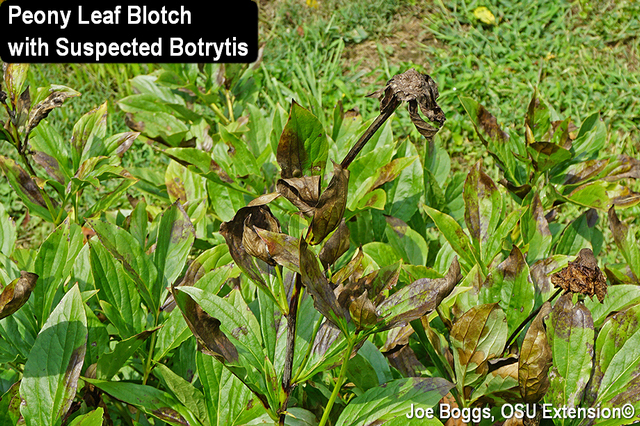 The gray mold fungi may infect newly emerging shoots in the spring covering them in a fine, velvety gray mold.  The Botrytis can also infect flower parts later in the season to produce disease symptoms labeled "bud blast" with flower buds failing to open and "flower blight" with opened flowers collapsing and becoming blackened.  Fungal infections can also move down the stems to produce a "shoot blight." 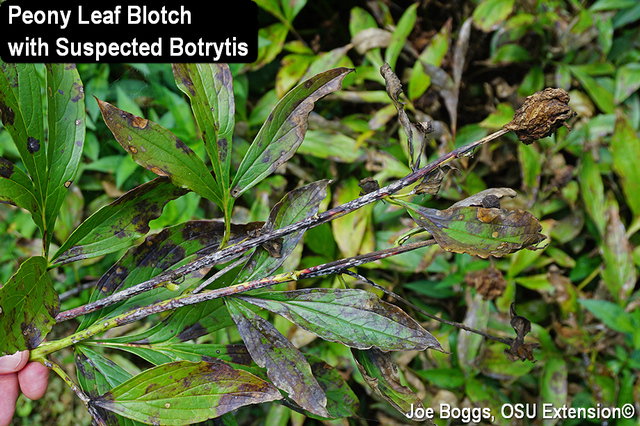 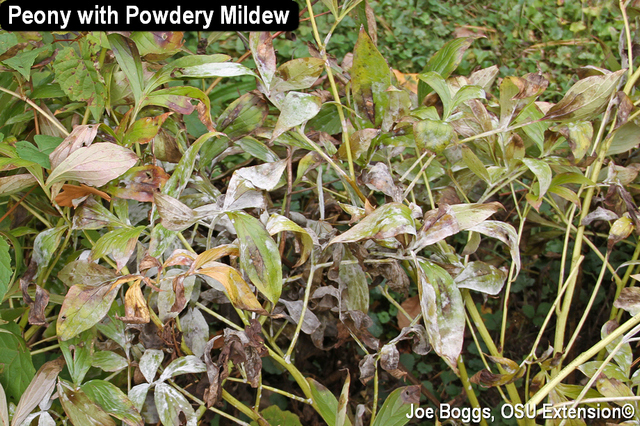 Of course, you should never depend on a field diagnosis as the final word on a disease diagnosis.  If you want to know exactly which disease(s) is at work, sending samples to our OSU C. Wayne Ellett Plant and Pest Diagnostic Clinic can provide answers for making an accurate diagnosis.

The good news is that these diseases are not considered to be killers of garden peonies.  Symptoms tend to escalate as the season progresses meaning plants apparently have enough time to produce and store enough carbohydrates to support regrowth the following season.

The bad news is that these diseases can seriously detract from the aesthetic value of peonies in landscapes.  Equally important, infections commonly escalate over time meaning that disease symptoms tend to worsen year after year unless something is done to break the disease cycles. 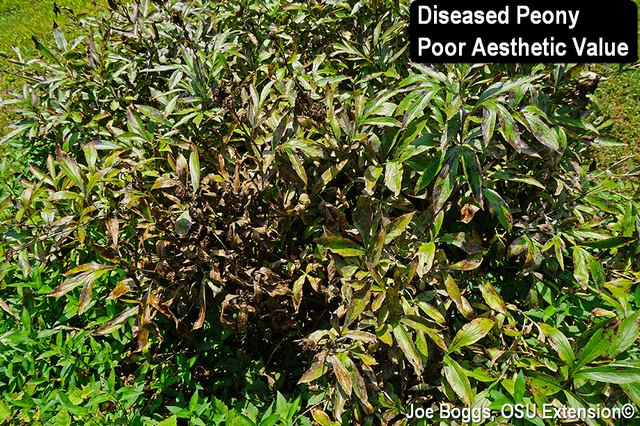 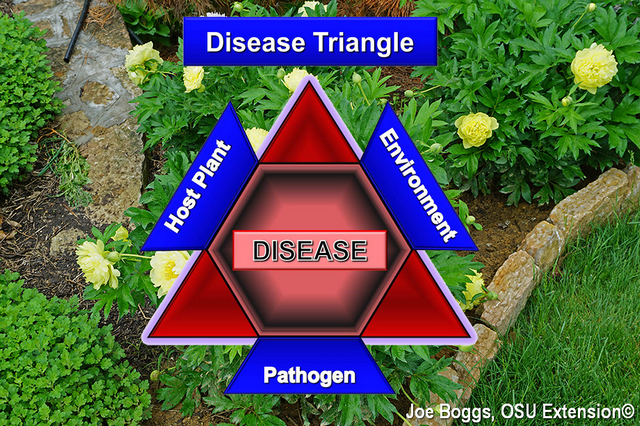 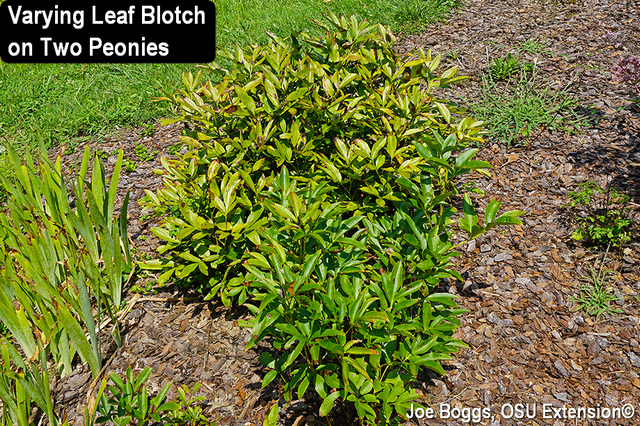 Removal of plant pathogens through sanitation is one of the effective management strategies for both of these garden peony diseases.  This approach focuses on getting rid of infectious tissues that harbor the fungi throughout the growing season or over the winter. 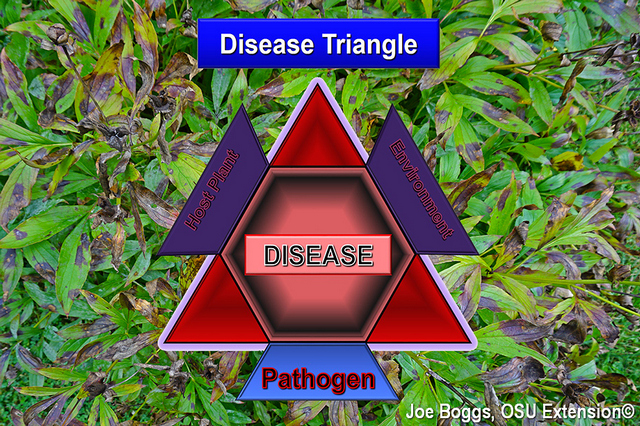 1. Cut, remove and destroy all of the top growth down to the soil line.

2. Rake, remove and destroy all mulch and plant debris that was beneath the infected plants.

3. Redistribute new mulch for the winter to a depth of no more than 2 – 3".  This will suppress the release of fungal spores next spring from infectious debris that may have been missed during the fall clean up.

Protect new shoots using an appropriately labeled fungicide.  The product label must include the site (e.g. landscape, nursery, etc.) and make certain peonies are not listed as being sensitive to the product.  This is an added protective measure and requires just one or two applications.  I have heard several anecdotal accounts of peony leaf blotch being successfully managed without these fungicidal applications in the spring.  However, these applications should be considered if there were heavy Botrytis infections this season.

During the Growing Season: