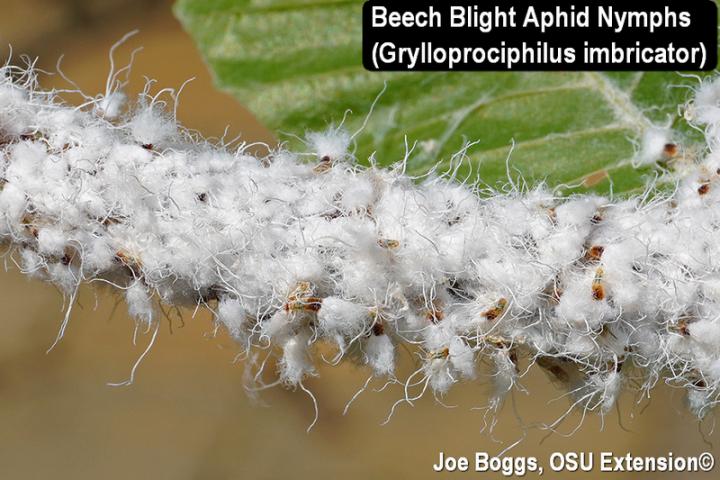 The uniquely entertaining Beech Blight Aphids (Grylloprociphilus imbricator) are taking the stage in Ohio.  I’ve received several e-mail messages from across the state about these unusual aphids and Brian Heinz (Horticulture Manager, Spring Grove Cemetery and Arboretum) alerted me to chorus lines shaking their derrieres on their namesake host in southwest Ohio.

Despite their destructive-sounding name, they cause little to no damage to the overall health of infested American beech trees (Fagus grandifolia) which is their primary host.  However, they may have an indirect effect on forest regeneration. 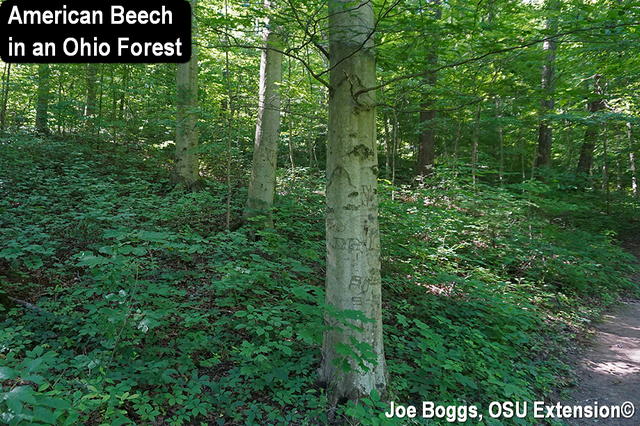 The aphid nymphs exude tufts of white, wool-like filaments from their posterior ends.  Large numbers of these native aphids gather in prominent groups that are commonly called "colonies."  The colonies may include thousands of individuals and appear as a collection of white, fluffy material lining the twigs and branches of their namesake host and commonly spilling over onto the undersides of the leaves. 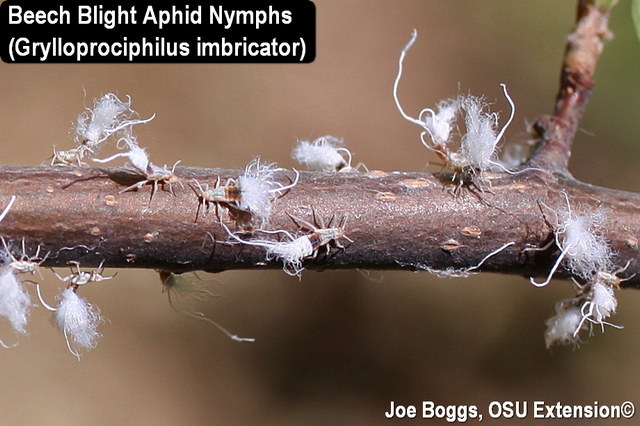 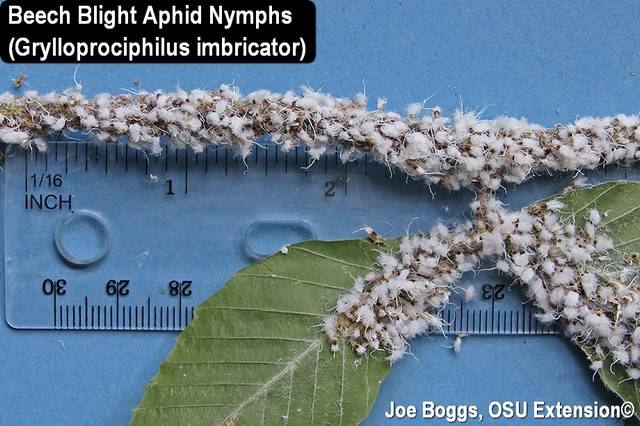 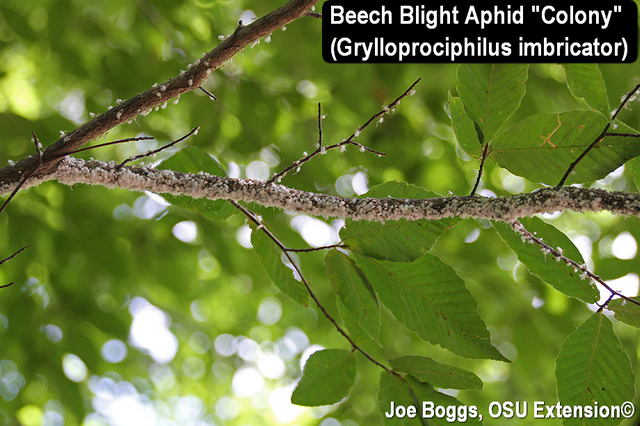 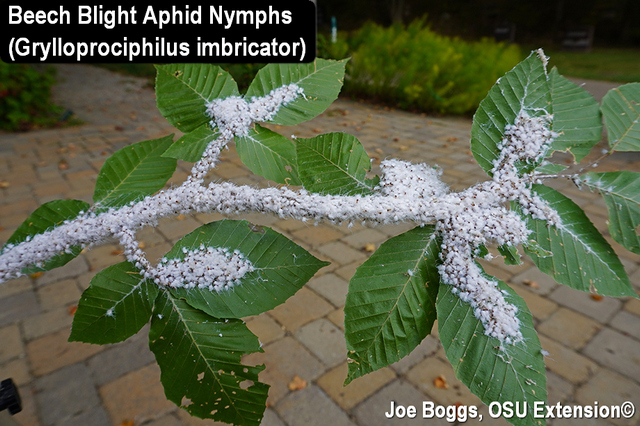 When disturbed, the entire colony will pulse their woolly rear ends in unison in what appears to be a synchronous samba.  This peculiar behavior has earned the aphid the alternate common name of the "boogie-woogie aphid."  I believe no other insect upstages beech blight aphids in entertainment value.

You can see what I mean by clicking on this hotlink to a YouTube video I uploaded featuring the boogie-woogie aphids:

They May Stab You!

It is speculated that the mass-wiggling of beech blight aphids distracts or dissuades predators and parasitoids from focusing on single individuals.  Defense strategies against predators that involve the collective movements of potential prey are well documented in other animals although I could find no published research where this defense theory was tested with this aphid. 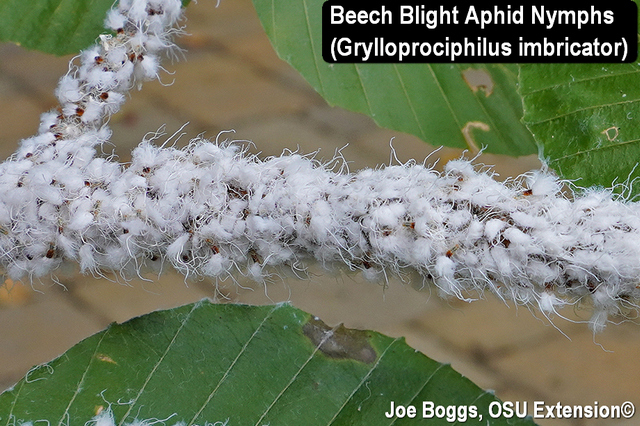 On the other hand, research has shown that beech blight aphid nymphs practice another far more unusual type of defense strategy.  The nymphs are highly aggressive against predators and will mass attack using their piercing-sucking mouthparts to inflict serious damage to their assailants.

This is uncommon for aphids.  In my teaching presentations, I sometimes use the relationship between lions and wildebeests as a model to talk about predator/prey relationships in the insect world.  The herbivorous wildebeests are a stand-in for aphids and the lions are a proxy for carnivorous insects like lady beetles that eat aphids.  However, imagine an upside-down Syfy world with wildebeests swarming and attacking lions on the Serengeti.

A scientific paper published in 2001 documents this defense strategy.  You can also read an entertaining description of the stabbing behavior of beech blight aphids in the 2012 blog posting titled, Dancing Woolly Aphids Will Probably Stab You (see Selected Literature below). 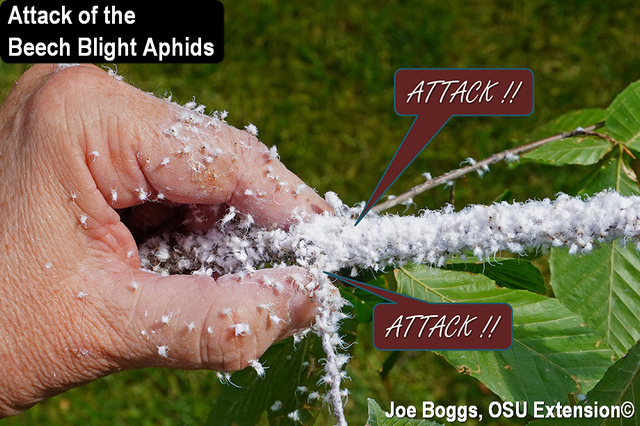 According to the literature, beech blight aphids may also be found on Baldcypress (Taxodium distichum); however, they are not seen feeding in colonies on twigs and branches.  A study published in 1984 on the life history of this aphid reported that beech blight aphids have been documented feeding on the roots of baldcypress. 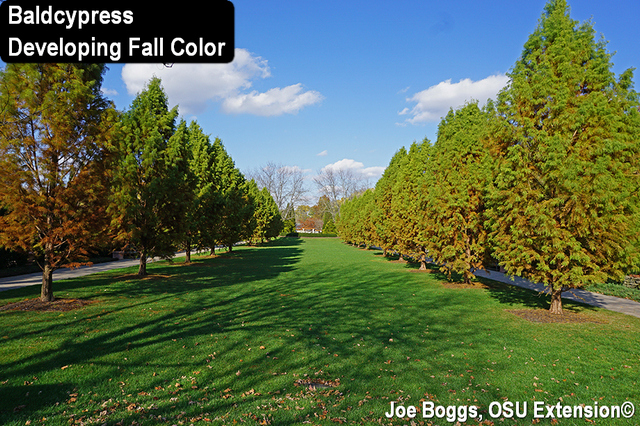 The study noted that the aphids can remain on baldcypress and are not required to spend part of their life cycle on American beech, or vice versa.  However, American beech is still considered the primary host, and baldcypress is the secondary host for this native aphid.  Don’t confuse the beech blight aphids with the Woolly Beech Aphid (Phyllaphis fagi) which only occurs on European beech (F. sylvatica) and its cultivars. 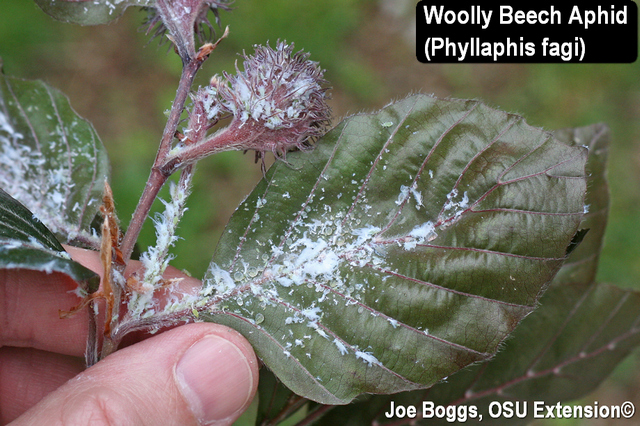 I have no idea why these aphids have “blight” in their common name other than their penchant for appearing as white multitudinous masses on American beech.  However, I’ve never found a scientific study linking the extraction of phloem sap by the aphids to any serious harm to the overall health of their host trees. 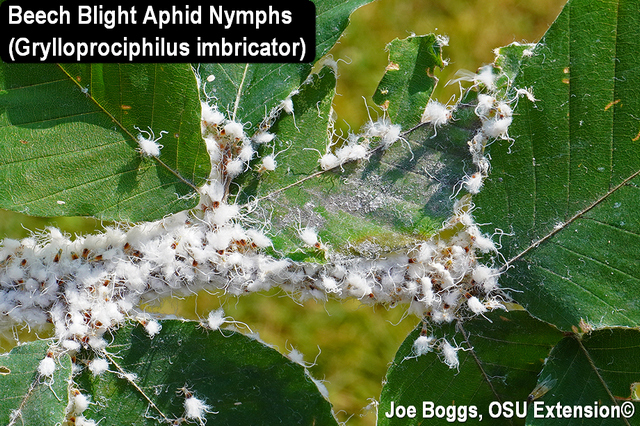 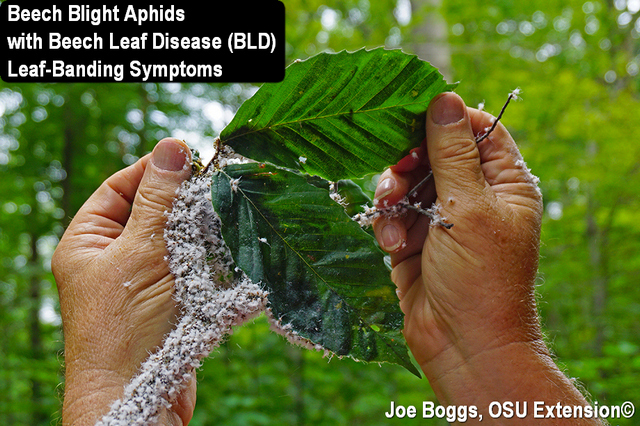 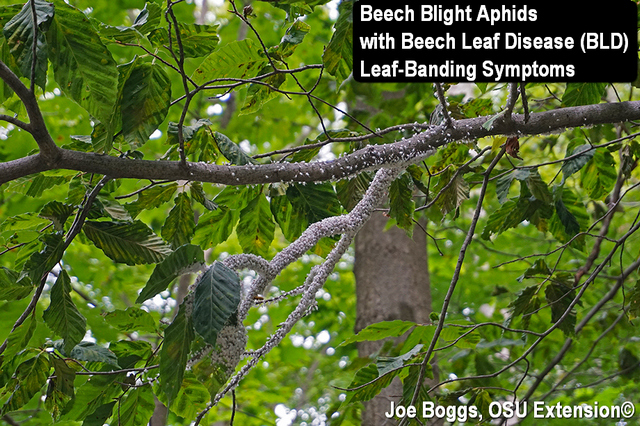 Beech blight aphids are prolific producers of honeydew.  Even though the aphids are usually confined to just a few branches, it is common for sidewalks, parked cars, outdoor furniture, slow-moving gardeners, etc., beneath their gatherings to become covered in sticky goo.  Indeed, aphid colonies are sometimes discovered by observing circular or semi-circular spots of sticky honeydew on hard surfaces beneath infested trees. 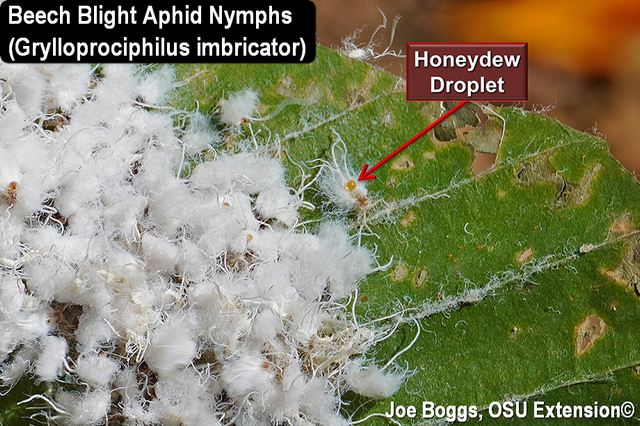 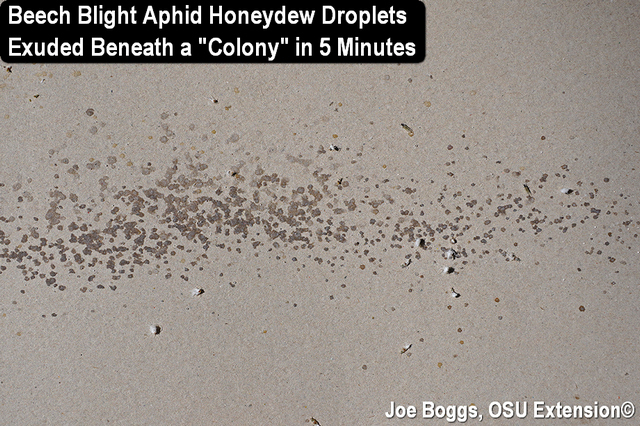 The sooty mold fungus, Scorias spongiosa (Ascomycete), has an obligate relationship with honeydew exuded out of the rear end of beech blight aphids.  It’s why the fungus is sometimes called the “beech blight aphid-poo fungus.”  However, the sooty mold may also colonize honeydew produced by a few other woolly aphids such as the woolly alder aphid (Prociphilus tessellatus) which is also known as the maple blight aphid owing to its alternate host.

The fungal growth of this unusual sooty mold begins like most sooty mold fungi; it grows as a dense, black, "fuzzy" mat on top of the honeydew.  However, over time, the mat thickens into a brownish, furry mass. 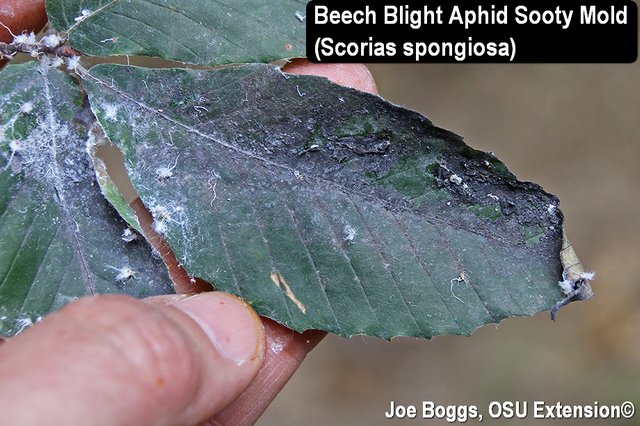 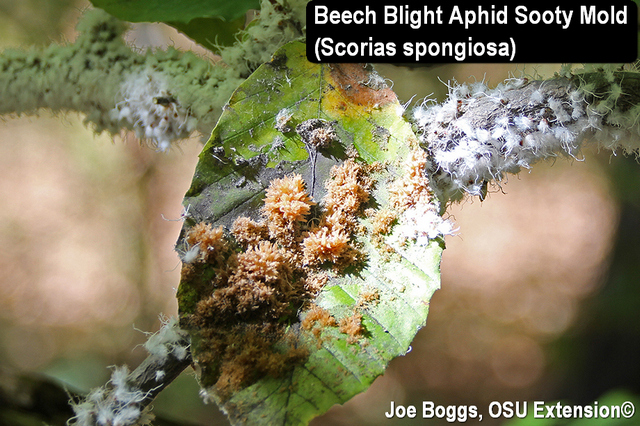 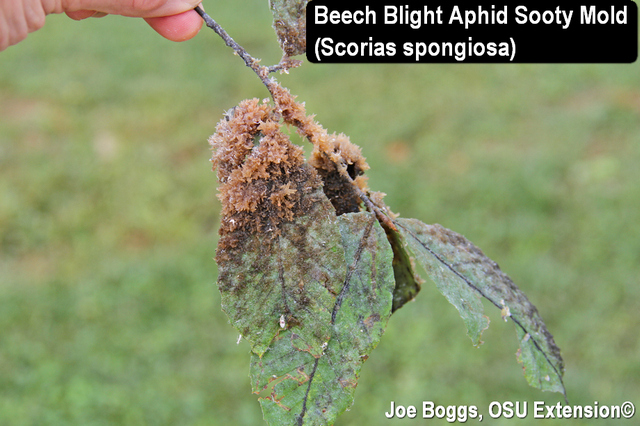 The fungus then progresses into a growth phase that is unlike most sooty molds.  It produces a spongy, golden-yellow heap that may rise 1 - 2" or more above the leaf or twig surface.  The odd-looking fungal growths look like nothing else that would commonly be associated with aphids or honeydew although it does attract yellowjackets and baldfaced hornets in search of a sugary meal. 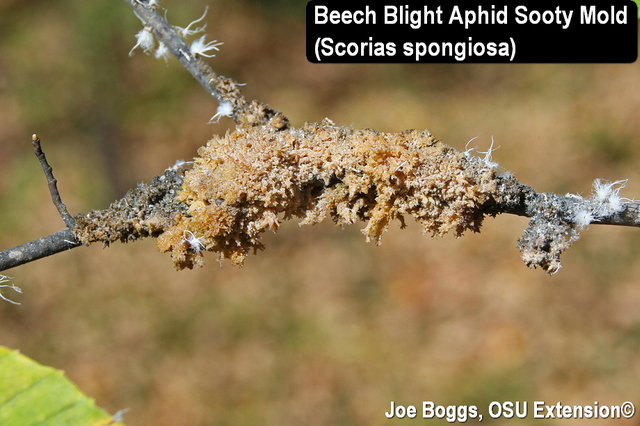 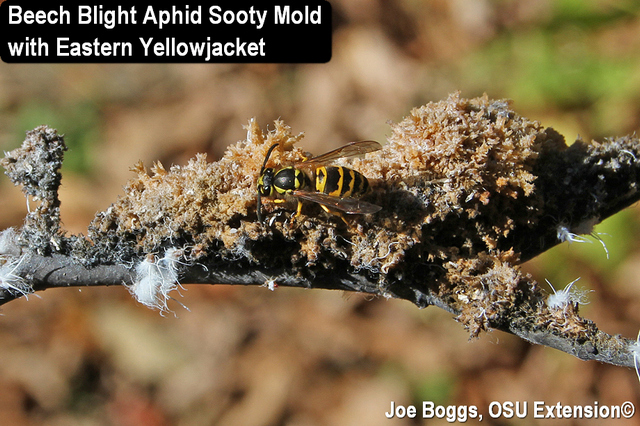 During the winter, the fungal accretions turn coal-black and may remain evident through much of the next season.  The black masses are sometimes mistaken for more serious plant problems such as Black Knot fungal galls that occur on members of the Prunus genus.  However, unlike the stem-cankering black knot fungus, the sooty mold fungus does not cause damage by invading the stem as illustrated in the image below. 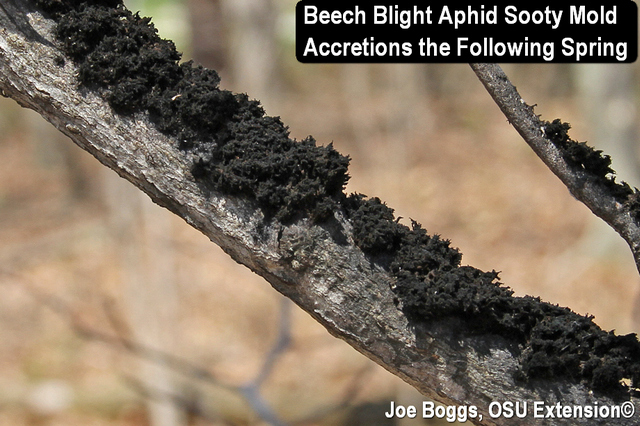 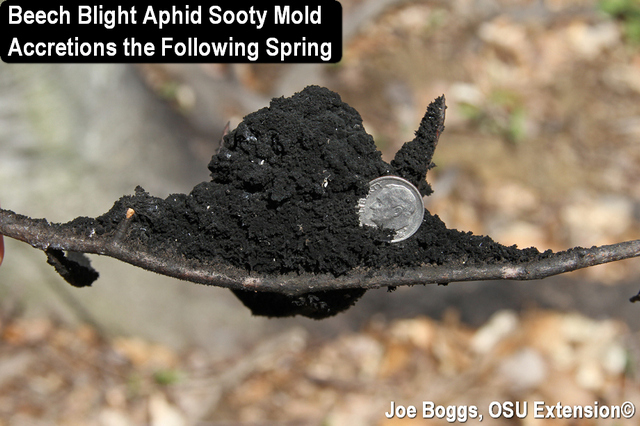 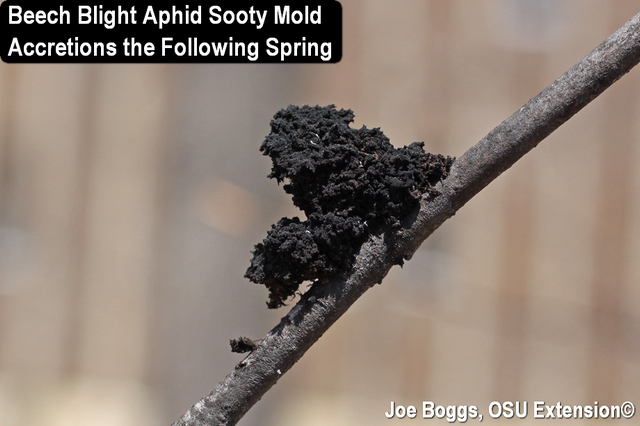 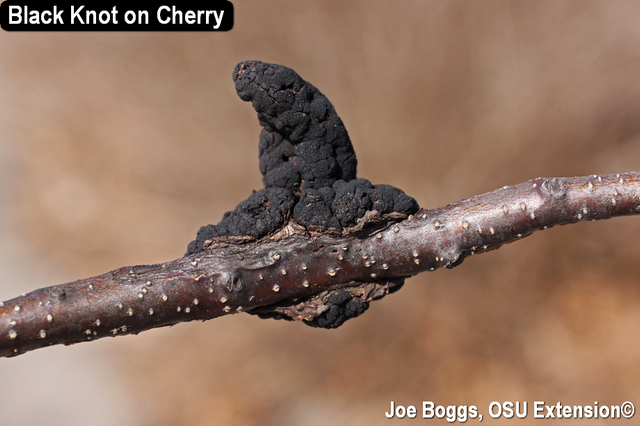 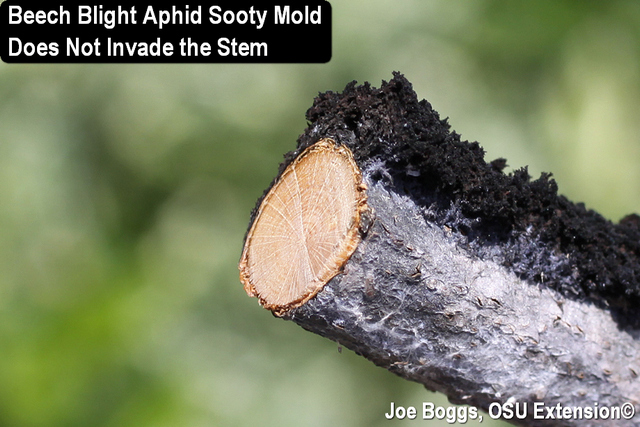 Beech blight aphids may not have a direct impact on their tree hosts; however, they may have an indirect impact on forest regeneration.  A study published in 2014 illuminated a link between these aphids and decreased growth and survival of tree seedlings beneath heavily infested trees.  The study described it as a “cascading effect” associated with the triumvirate of American beech, beech blight aphids, and the unique S. spongiosa fungus. 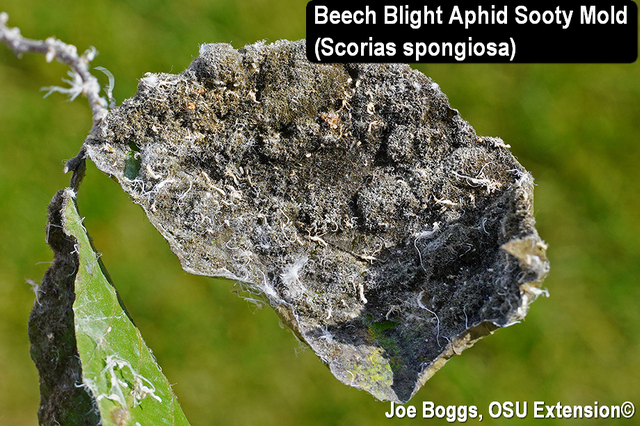 The beech blight aphid fungus will grow anywhere that woolly aphid honeydew is deposited including on the leaves of understory tree seedlings.  The authors of the 2014 study observed the reoccurrence of the aphids on the same trees year after year.  They documented small but significant differences in seedling survival and growth between seedlings that experienced heavy black sooty mold colonization and seedlings free of the sooty mold growth.  The seedlings tested included American beech as well as red maple (Acer rubrum), tuliptree (Liriodendron tulipifera), sycamore (Platanus occidentalis), mockernut hickory (Carya alba), and white oak (Quercus alba).