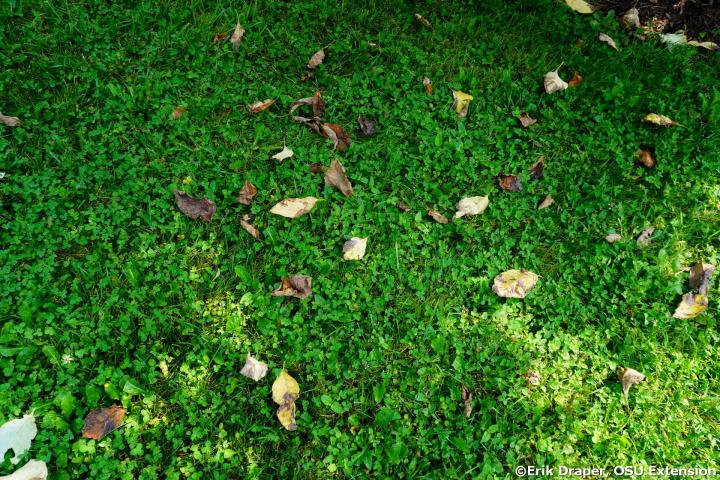 As I closely examined leaves on the tree and on the ground, it was easy to see an assortment of maladies were impacting the leaves.  Let’s start with holes in the leaves, while some were kidney bean-shaped, others appeared to be almost round.   These holes are randomly scattered across some leaves, yet other leaves are absolutely riddled with holes.  There are no readily discernible, consistent patterns or site placements for the holes in the leaves.  These holes were made earlier in the season as evidenced by the edges of the holes being completely healed over and not freshly wounded, open and raw.

These holes are the result of feeding by the Yellow Poplar Weevil (YPW), Odontopus calceatus, also known as sassafras or magnolia weevils.  Depending upon when adults feed on the leaf, the holes may be small, due to direct feeding damage in mature leaves; contrastingly, holes can be quite large, if adults fed on young, rapidly expanding leaves.  These small, black, adult snout beetles will feed on and damage hosts such tulip poplar (yellow poplar), sassafras, and magnolia.

Joe Boggs reported on an outbreak of “flying ticks” or YPW on tuliptrees in July 2018 and Joe noted the following, “YPW have one generation per year; however, adults feed twice during the growing season.  Adults spend the winter in protected sites such as the duff beneath trees.  They emerge in the spring to feed, mate, and lay eggs in leaf midribs.  This is the so-called "spring generation" of adults.  The "summer generation" arises from the leafmining larvae.  There are typically a greater number of adults in this generation compared to the spring generation meaning that most of the damage is done in early to mid-summer.  Although yellow poplar weevils are finished feeding in central Ohio, the damage will remain evident throughout the season.”

Incidentally, in that same article, Joe mentions another insect that he was surprised to see, is also creating havoc on the ‘Yellow Bird’ magnolia leaves.  The Magnolia Serpentine Leafmining Caterpillar (Phyllocnistis magnoliella) produces a unique “silvery snaking handiwork” of feeding trails swirling and crisscrossing the leaf.  The larva of this moth is a leafmining caterpillar which feeds close to the upper epidermis of the leaf, resulting in the silver-like mines or feeding trails left on the leaf.  Little is known about the life cycle of this moth and as with most leafminers, control is not practical because the insect is protected within the leaf.  If you notice them munching on your magnolia, just enjoy the designs they create on the leaves.

The final symptom or issue impacting the magnolia leaves were the white, turning to gray and sometimes just brown splotches were scattered over most of the leaves.  These splotches were caused by a fungal disease called Powdery Mildew (PM).  This malady on magnolias is caused by two species of fungi; specifically, Microsphaera alni and Phyllactinia corylea.

PM symptoms include white, powdery patches on the upper leaf surface, but more often than not very fine, mycelial mats can be seen covering the leaf surface.  At first, the leaf begins to show a slight reddish color and then the reddish coloration turns brown.  Depending on disease severity, leaves can be stunted in size, shape distortion and curling can also occur.  In general, PM flourishes when daytime temperatures are warm to hot, nighttime temperatures are cool, and dew forms on the foliage, which seemed to be just about every night this year!  So I guess you could accurately say that on this magnolia, I hit the pestilence trifecta!  But the good news is that not one of these pests, nor all three together, will cause any lasting damage or harm to the tree in the landscape!