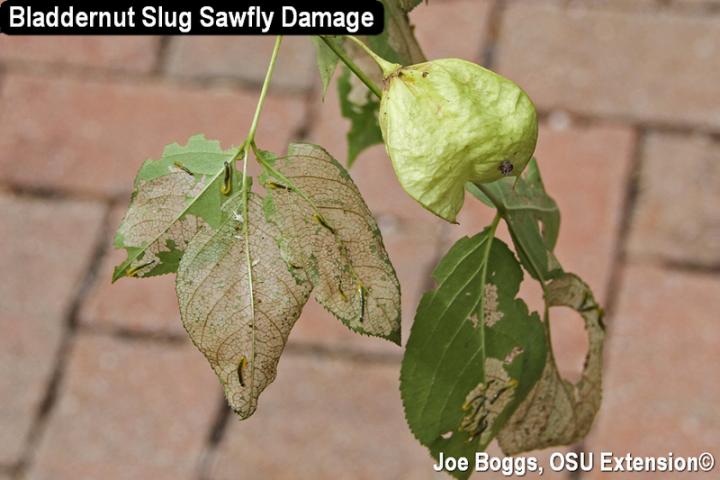 I’ve been posting BYGL Alerts about the Scarlet Oak Sawfly (Caliroa quercuscoccineae (Dyar)) for years.  Despite this sawfly's common name, the larvae may be found feeding on a wide range of oaks belonging to both the white and red oak groups. 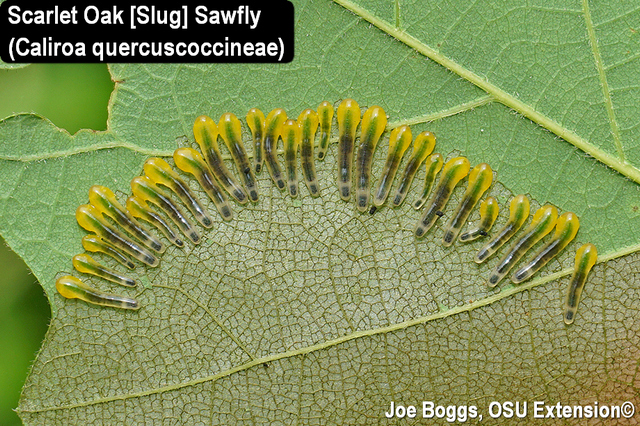 This native sawfly has a reputation for producing occasional outbreaks causing heavy defoliation of trees in Ohio forests and landscapes.  The last instar stage is notable for two black spots that appear on their front end which makes them look like they’re wearing sunglasses. 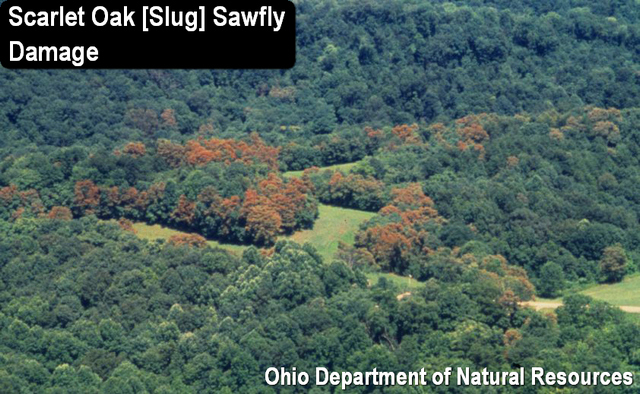 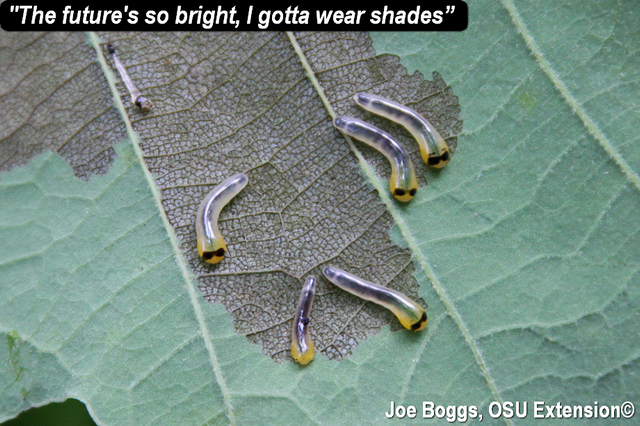 In 2015, I reported that I had found sawfly larvae skeletonizing American bladdernut (Staphylea trifolia) leaves in southwest Ohio (BYGL Bug Bytes, September 3, 2015, “Scarlet Oak Sawfly on Bladdernut?”).  The title of that report was based on the appearance of the larvae.  They were the spitting image of scarlet oak sawfly.  I photographed and reported on these slug-like larvae on bladdernut in 2017, 2019, and 2020. 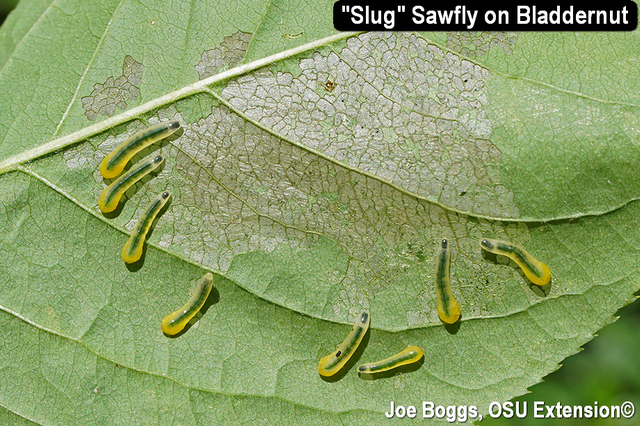 The larvae found on both the Staphylea and Quercus hosts appear slug-like owing to their elongated unsegmented bodies and a covering of mucoid-like slime that presumably helps them stick to the undersides of leaves and may also dissuade predation.  In fact, the scarlet oak sawfly is sometimes called the scarlet oak slug sawfly or just oak slug sawfly. 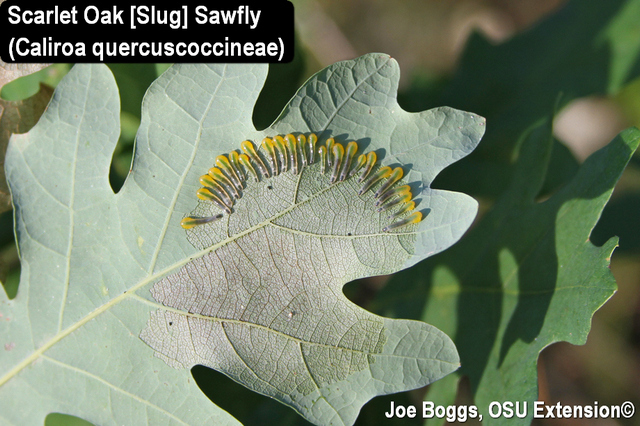 However, I could find no host records of scarlet oak sawfly larvae feed on anything other than oaks and I could not find information on a species of sawfly that feeds on bladdernut.  Of course, it would be unusual for a leaf-feeding insect to confine its feeding to two such disparate hosts.  Oaks belong to the plant order Fagales and bladdernut to the order Crossosomatales.  They’re as different as apples to oranges.

Indeed, I collected the larvae from bladdernut and caged them with fresh white (Q. alba) and scarlet (Q. coccinea) oak leaves and the larvae died rather than feeding on the offered leaves.  A reasonable assumption was that the larvae were two different species.  I began calling them “Bladdernut Slug Sawfly” based on their appearance and the plant host.  However, the true identity of the sawfly has remained a mystery to me since 2015.

Last year, I received an e-mail message from Pete Woods, an ecologist with the Pennsylvania Natural Heritage Program, who had also been observing sawfly larvae on bladdernut.  He also tried the oak host-test with larvae collected from bladdernut and the larvae died rather than feeding on white oak leaves.  Like me, Pete had concluded that the bladdernut slug sawfly was a different species from the scarlet oak sawfly and we both speculated it could be an undescribed species.

However, this season, Pete pursued an important step in seeking an identity. He reared adults and sent the sawflies to David Smith, Research Associate (Emeritus, USDA/SEL), with the Smithsonian National Museum of Natural History.  He is an expert in the systematics of sawflies and identified the bladdernut sawfly as Caliroa lunata MacGillivray.  David noted that even though it was not a new species, there were no records of the plant hosts for the species.  It is why a search for a slug sawfly on bladdernut failed to return the identity of the culprit. 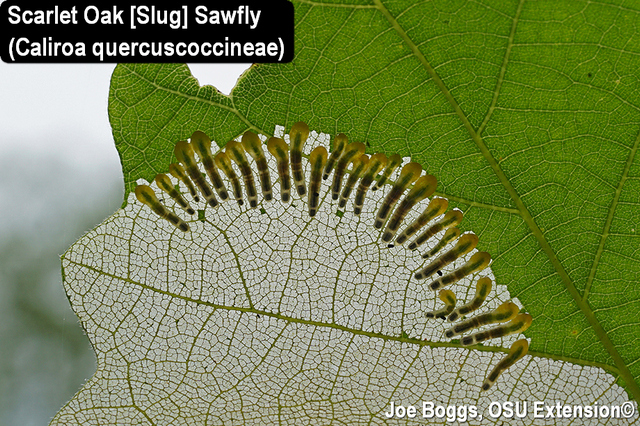 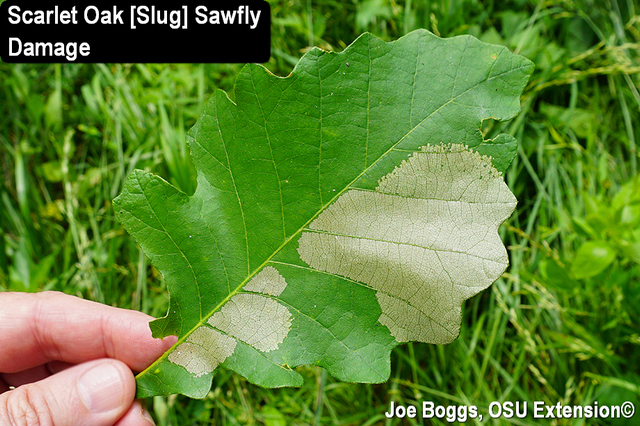 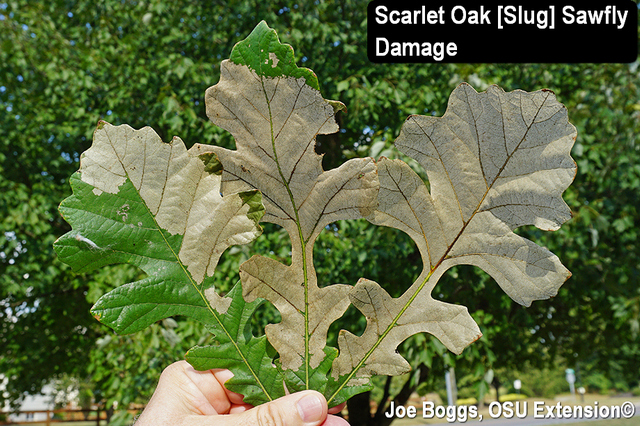 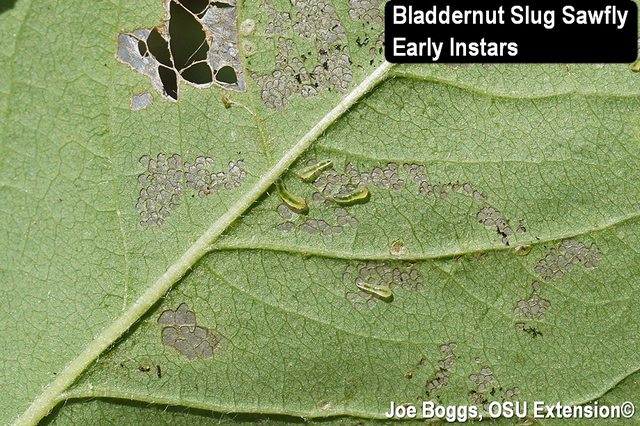 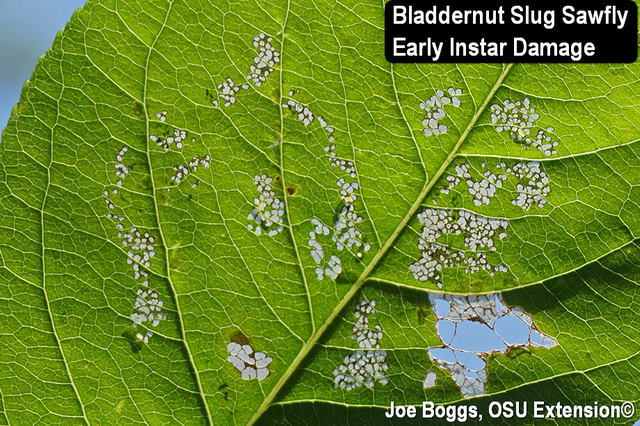 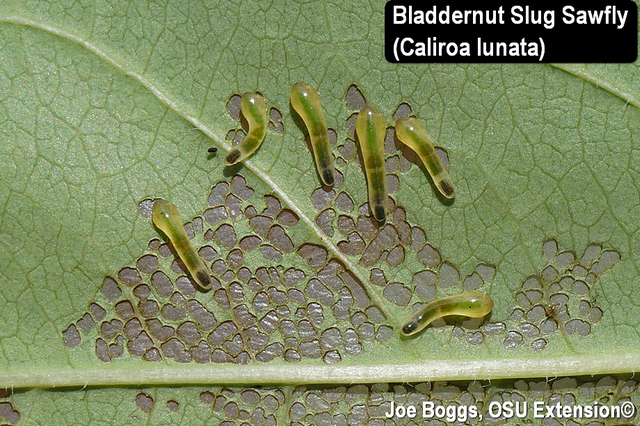 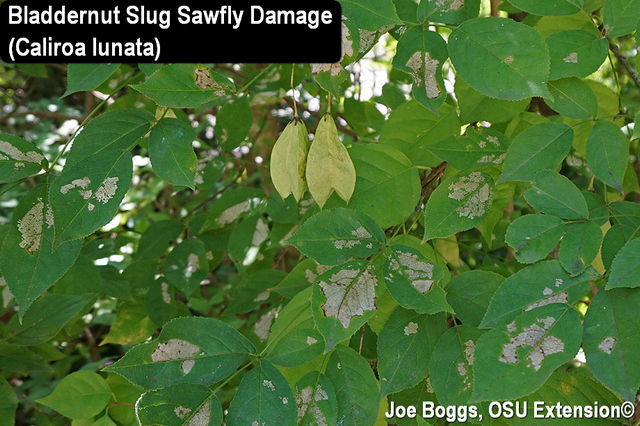 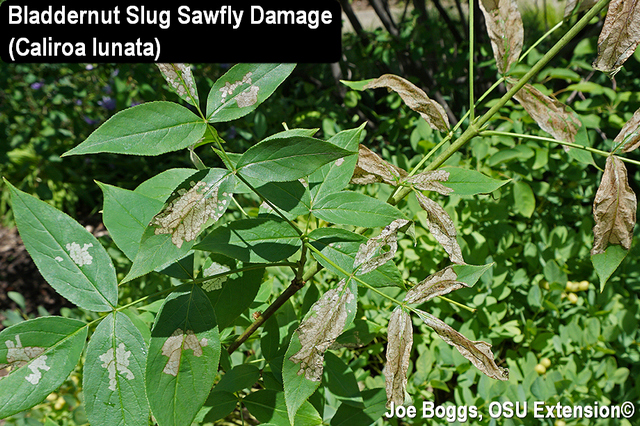 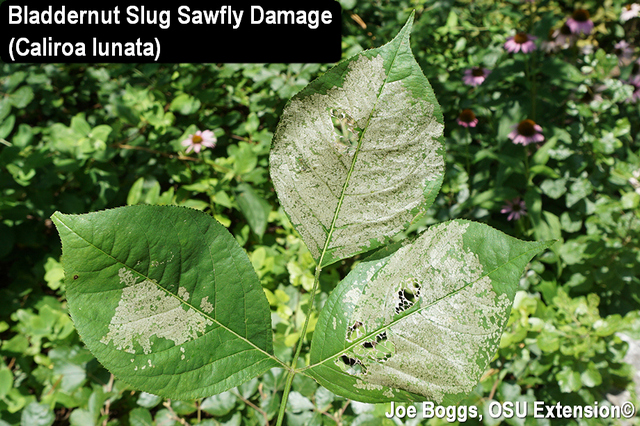 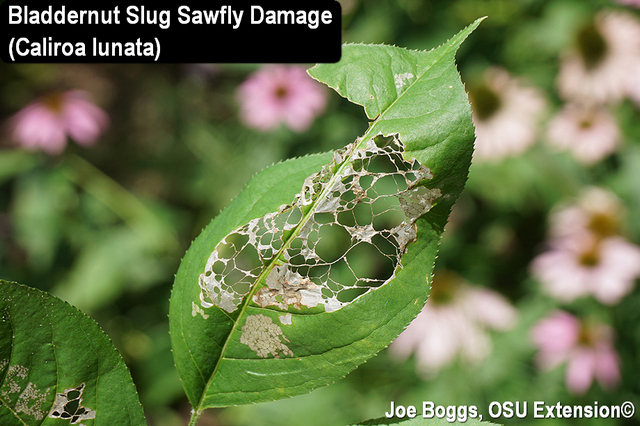 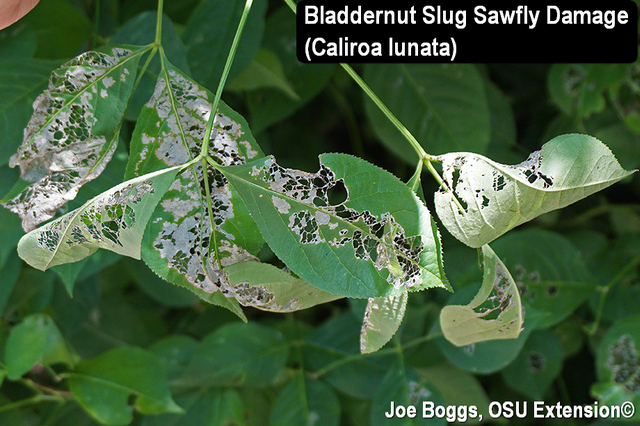 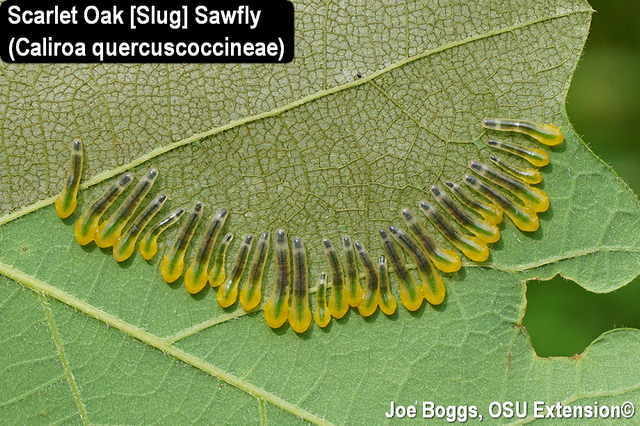 The opposite is true with bladdernut slug sawfly.  It's common to find a range of instar stages feeding on the same leaf.  I've photographed what appear to be late-instar larvae feeding on one leaf and obviously first-instar larvae feeding on another nearby leaf.  I'm not certain if this represents overlapping generations or if egg hatch simply occurs over an extended period.  However, because I've observed larvae feeding from early June to early September, it's reasonable to assume that this sawfly has multiple generations per season in Ohio. 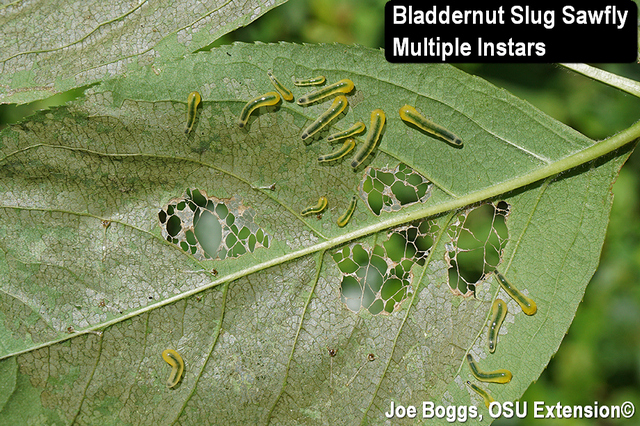