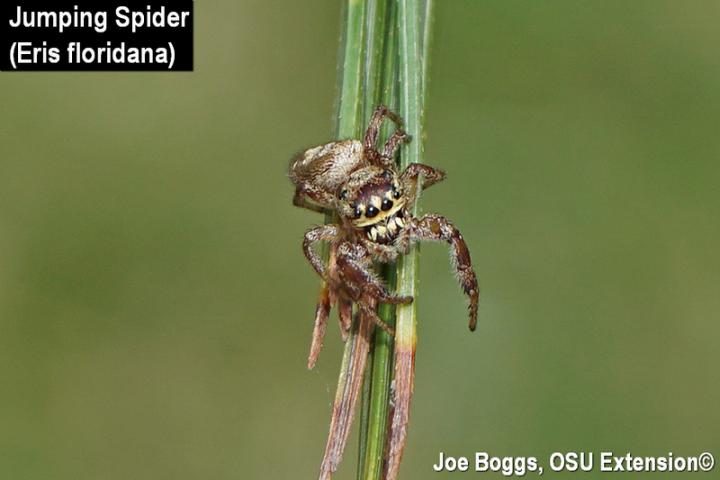 Jumping spiders get their name from their ability to leap long distances with a single bound.  They use their jumping talent to travel, evade enemies, and pounce on prey which is often much larger than these diminutive spiders.  They are the terriers of the spider world. 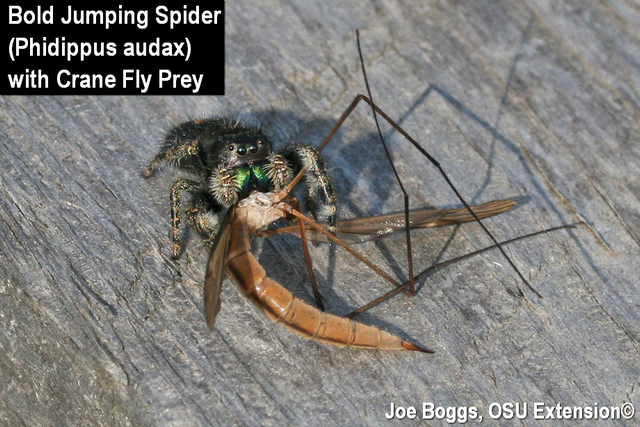 At last count, the jumping spider family, Salticidae, includes over 6,000 described species worldwide.  This represents 13% of all known species of spiders making the family the largest in the order Araneae (the spiders).

Jumping spiders have wide-ranging body plans.  Most have hairs on their bodies, and some are very hairy with hair coloration allowing them to blend with their background; predators can sometimes become prey.  However, some lack noticeable hairs.  Others don’t even look like spiders; they mimic ants. 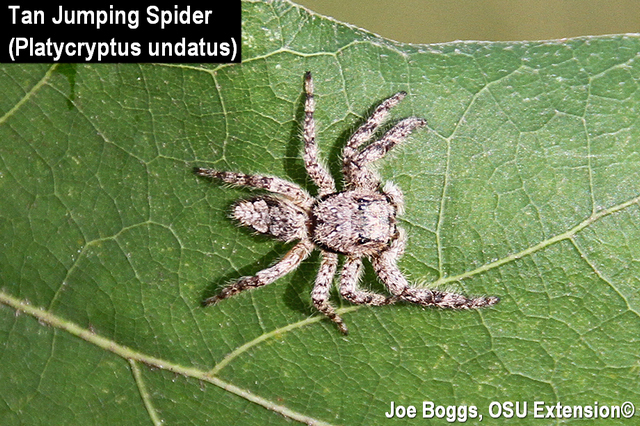 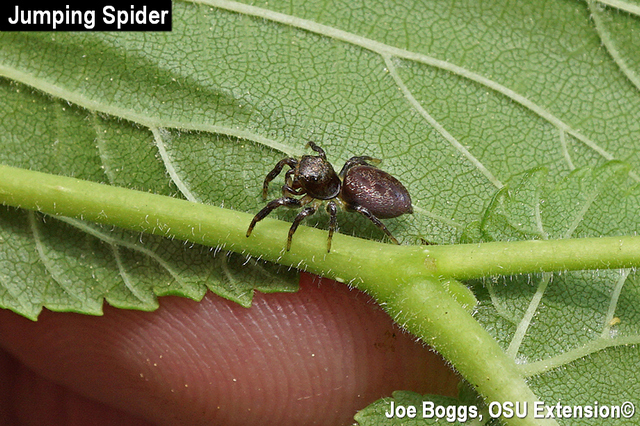 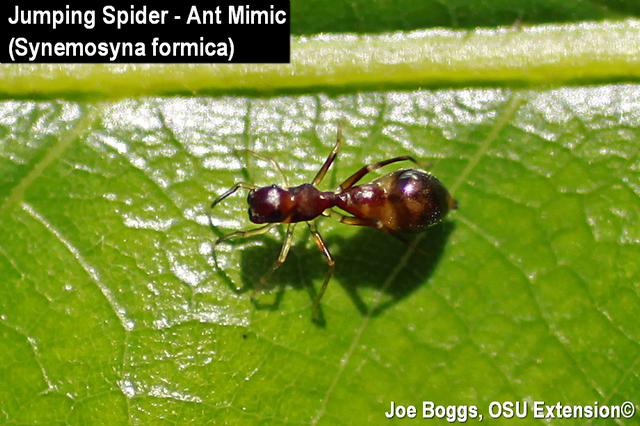 Jumping spiders are hunters.  They don't lounge on a silk web waiting to ensnare a meat meal.  Sometimes they just sneak up and grab their prey with their strong front legs.

Other times they use their powerful hind legs to launch themselves towards their prey.  Before their victim can say, "What the …?", the spider dispatches it with an injection of paralytic venom delivered through its fang-like chelicera.

Jumping spiders are well equipped to be predators.  Along with powerful legs, they also have excellent eyesight with 4 pairs of eyes (The better to see you with, my dear).  Indeed, their "flat faces" and two huge anterior eyes are prominent features of these spiders. 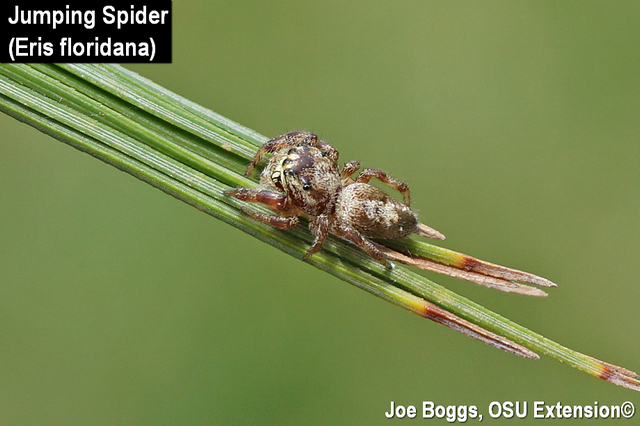 Even though jumping spiders don't produce a silk web, they do use silk for other purposes.  Before leaping, they tether themselves to a stationary object using a thread of silk called a "dragline" just in case they miss.  You may have observed this safety line if you've ever handled one of these small spiders (they aren't aggressive!).  They'll rappel out of your hand on what seems like a never-ending strand of silk.

Jumping spiders use silk to form small structures, often binding together pieces of plants, to spend nights and shelter from bad weather.  Their silk sanctuaries also provide a safe place to deposit eggs and protect hatchlings (spiderlings) until they can leave the nest.  Females of many species will even remain inside their abodes to protect their eggs until they hatch. 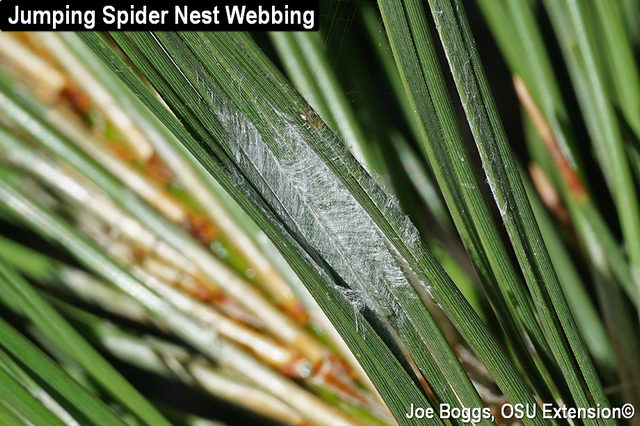 These silk structures may present a diagnostic challenge.  The peculiar silk shelters produced by the jumping spider, Eris floridana, on pines provide a good example.  This spider has no common name, but its frontal markings make it look like it's grinning ("Grinning Jumper?").  Its striking countenance is on display in the lead photo for this Alert. 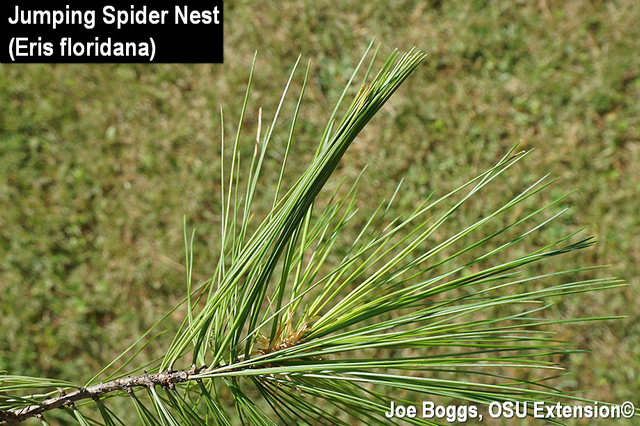 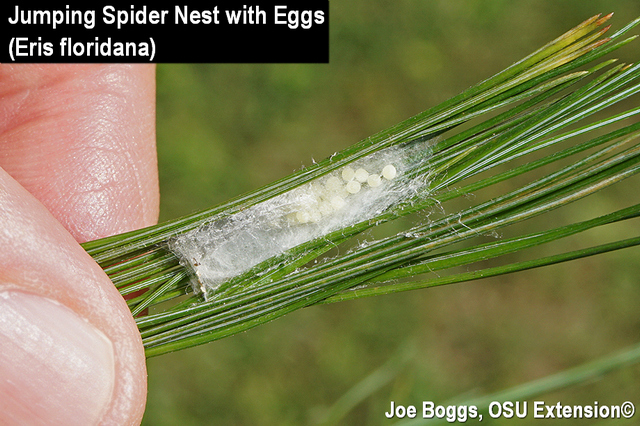 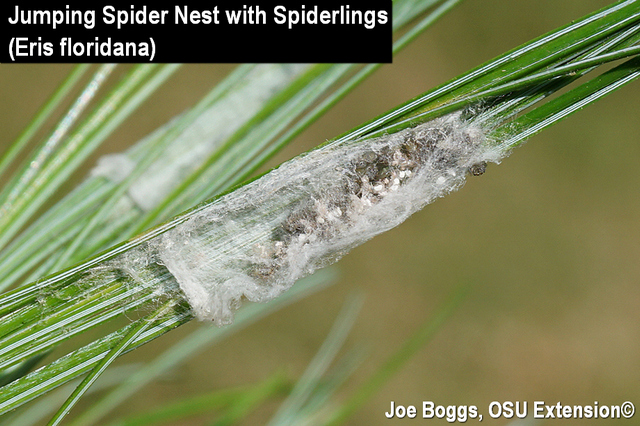 Their nests were almost dead ringers for needle structures produced by caterpillars of the pine tube moth (Argyrotaenia pinatubana).  The caterpillars bind 10-20 needles together with silk to form a tube-like structure.  They live inside the tube and feed on the ends of the needles.  Of course, the needles on the jumping spider's silk abodes were not damaged. 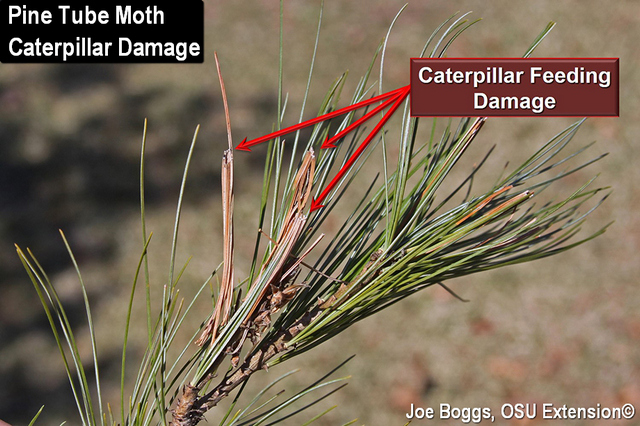 I recently came across a silk structure produced by another jumping spider possibly belonging to the genus, Chalcoscirtus.  As you can see, the nest was produced by using silk to bind together a red maple (Acer rubrum) leaf that’s showing obvious symptoms of physiological leaf scorch.  Of course, the spider nest had nothing to do with the leaf scorch. 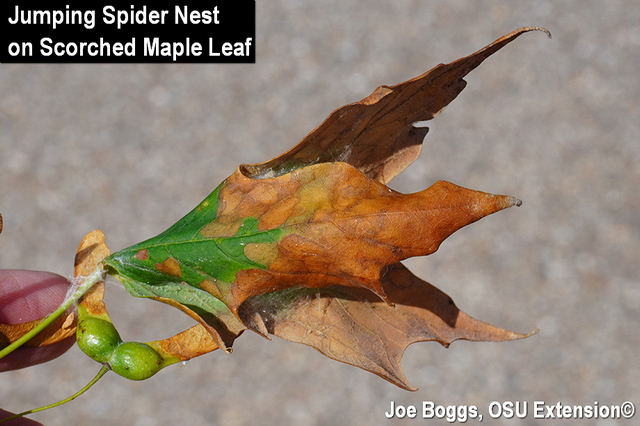 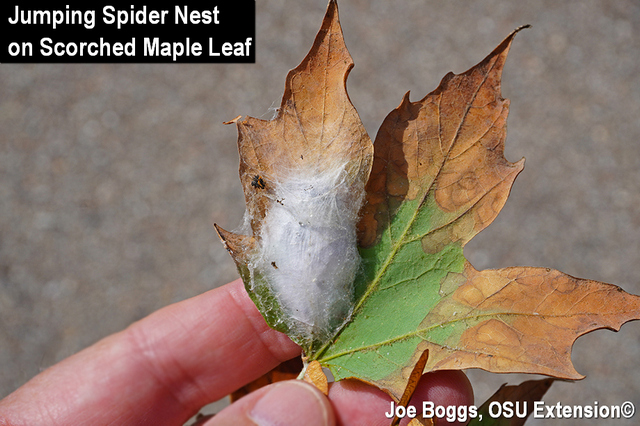 Opening the nest revealed a collection of spiderlings.  The spiderlings had not yet matured enough to be on their own. 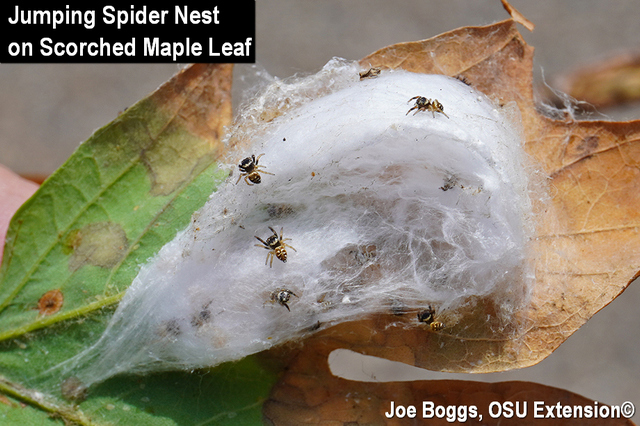 As with all of the over 600 species of spiders found in Ohio, jumping spiders are predators that eat insects as well as other arthropods.  Many are plant pests.

As I noted above, jumping spiders are not aggressive; neither are our other spiders.  If you find one in your home, just gently shepherd it out of your house; they aren't biters.  Of course, you may first have a little fun by seeing just how long they'll keep spinning more silk to try and escape your attention!