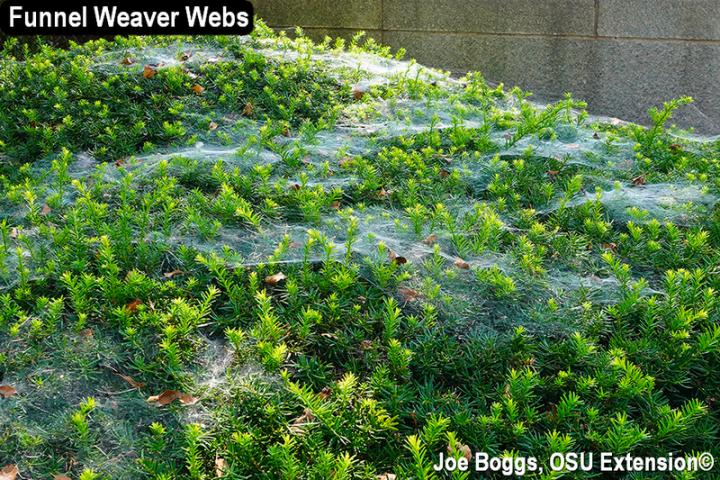 There are over 600 species of spiders found in Ohio and most feed almost exclusively on insects.  The spiders that are currently dominating (draping over?) landscapes are the Sheetweb Weavers (family Linyphiidae) and Funnel Weavers (family Agelenidae)

These spiders have been with us all season long.  However, this is the time of the year when their gossamer creations are on full display particularly after long periods with no heavy rain.  The rain can wreck their webs and also wash away dust collected in the webs that makes them stand out against green foliage. 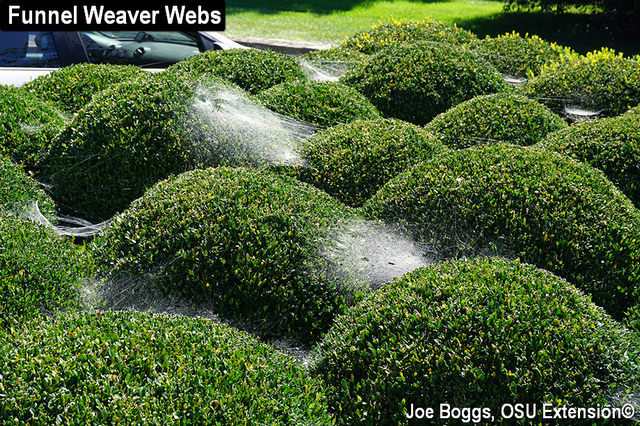 Funnel weavers produce large, flat, sheet-like webs spun across the grass, under rocks or boards, or over the branches of shrubs such as yews and junipers.  Funnel webs may measure more than 1' across.  The webs slope gently towards a narrow funnel or tube where the spider resides awaiting its next victim. 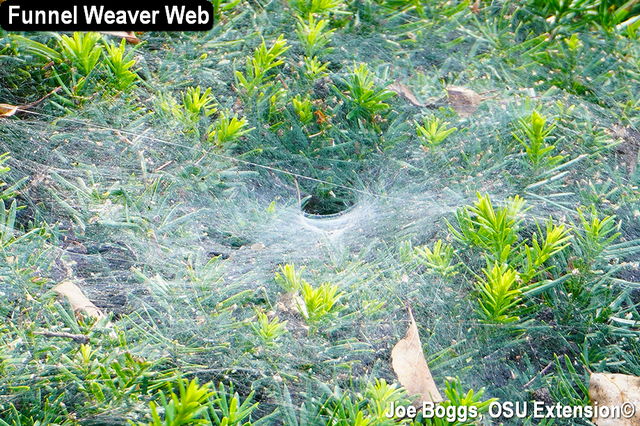 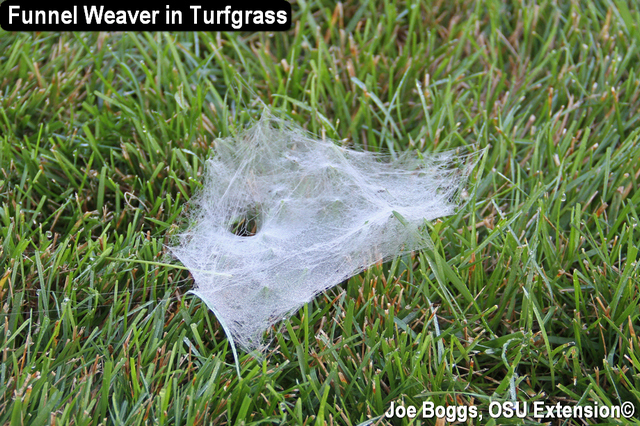 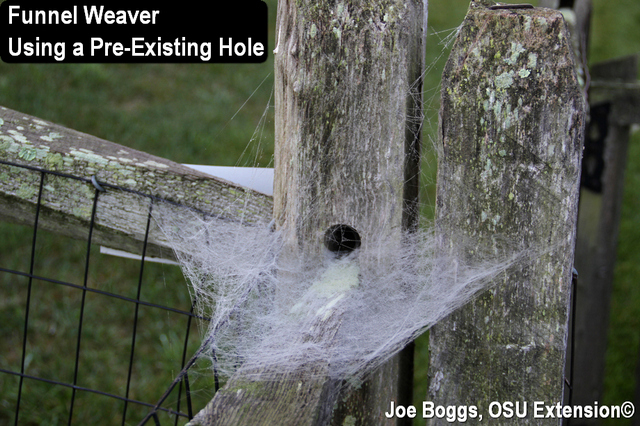 The medium-sized spiders resemble small wolf spiders.  However, as with most spiders, they have excellent eyesight and will quickly scurry into their funnels if they spot arachnid-portrait photographers trying to snap a close-up (personal experience). 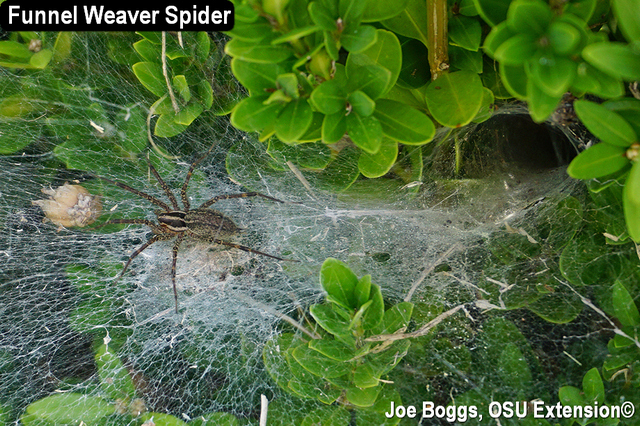 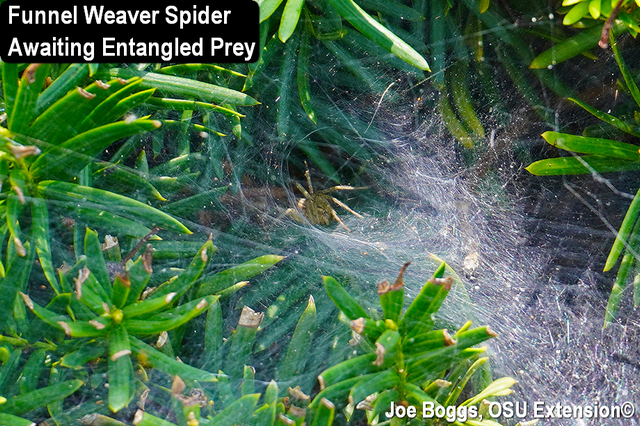 Sheetweb weavers construct several types of webs depending upon the spider species.  Some species spin flat or slightly curved webs that overlay vegetation and rival the sizes of webs spun by funnel weavers.  However, there is no funnel included in the web architecture.  The spiders hide beneath one edge of the web, or inside plant foliage along the edge of the web, to await their prey. 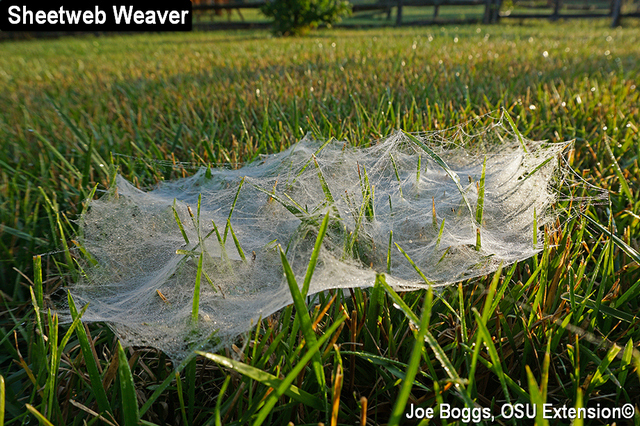 One of the more interesting sheetweb weavers is the bowl and doily weaver (Frontinella communis).  This is one of the few spider species with males capable of producing webs; however, females still dominate web weaving. 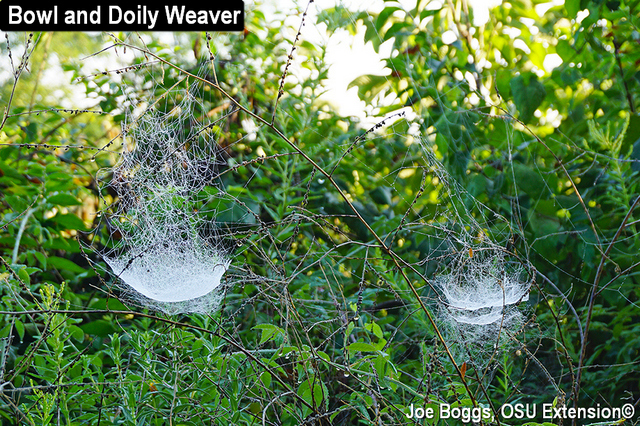 The spider constructs a complex web structure consisting of distinctly bowl-shaped webbing suspended from plant stems by a crisscrossing array of silk threads; this is the "bowl" in the common name.  The bowl is anchored below by a horizontal array of interwoven silk threads; the "doily."  Flying insects drop into the web-bowl after bouncing in pin-ball fashion off the interlacing silk threads used to suspend the web.   Of course, when they drop into the web-bowl, they fall into the "arms" (and fangs!) of the awaiting spider! 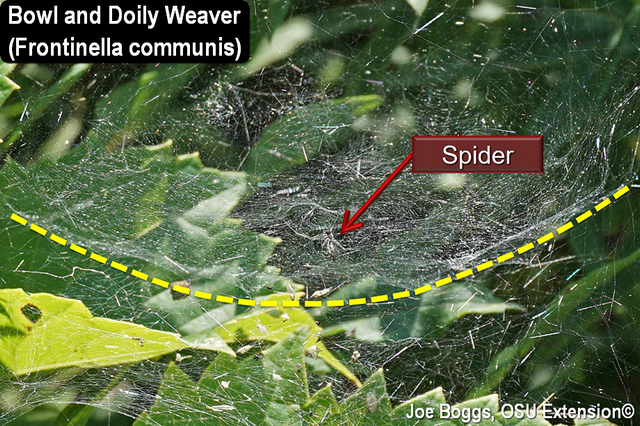 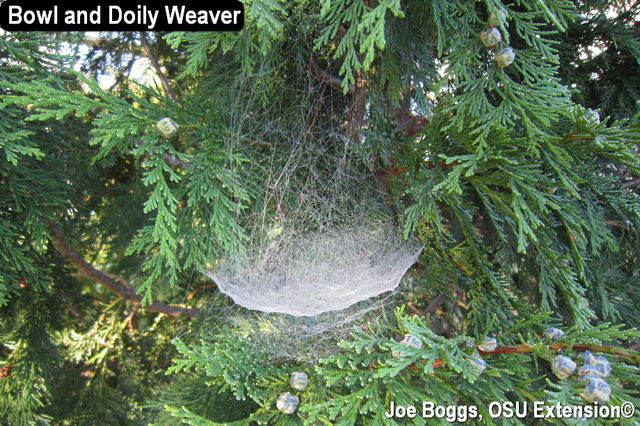 Do Not Kill These Bio-Allies

Spiders eat insects and research has consistently shown they remove a significant number of pests that we would have to deal with otherwise.  Of course, numerous arachnid engineered insect traps draped over low-growing shrubs can look like Halloween decorations.

Continually removing the webs will eventually cause the spiders to take a hint and relocate elsewhere.  If you see the spider on the web, just shoo it off before destroying their web so you don't accidentally commit an arachnicidal act. 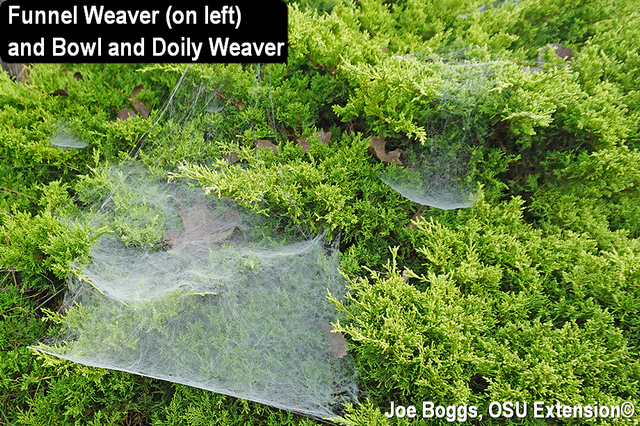