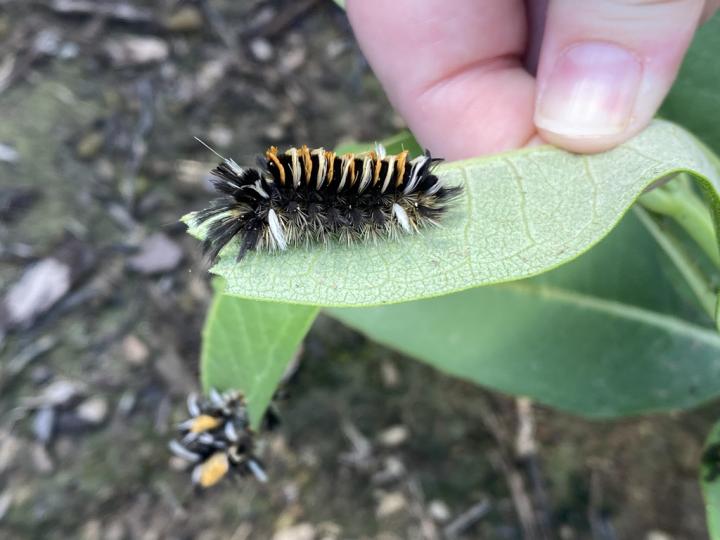 Each week, we spend some time "behind the BYGL-scene" doing some in-servicing ourselves. We gather virtually reporting what we are seeing, what has us stumped, and talking all things horticulture. Here is a quick summary of what we have been observing and receiving questions about.

Many people are watching their milkweeds closely this time of the year. They sometimes are surprised when they see more than just the monarchs. Milkweeds support several insects including aphids, true bugs, beetles and the tussock moth caterpillar shown above.

There are two types of tar spot that we are continuing to see in Ohio. Rhytisma acerinum produces large spots, typically 0.5 - 1.0 inches in size, and Rhystisma punctatum produces pinpoint sized lesions. While both can become obvious and even somewhat alarming to homeowners, they are not a serious threat to the overall health of the trees that are infected.

If you look closely at the base of the hosta flower hanging down in the center of the photo below, you will see what appears to be three slits. These are the results of an insect going straight to the source, rather than entering the flower at the top and working their way down. It is commonly referred to as 'nectar robbing', and found especially on the long tubular flowers.

This sneaky action can done by many different pollinators like bees, birds, ants, and moths in various parts of the world. In the case of bees, they go straight to the nectar reward, bypassing the sexually reproductive parts, and cut holes in the base of the corolla to suck out deliciously sweet nectar. The first to dine on the nectar and actually gain entrance are the primary nectar robbers. There can also be secondary robbers, including honey bees, other bumble bees, and moths, which visit the flowers and use the pre-made holes to secure the additional nectar.

The sound of the periodical cicadas have disappeared, while the dog-day cicadas are singing strong. The one thing that does remain as a reminder of the broad X emergence from earlier this season are the egg laying sites as shown below. Additionally, people in areas where populations were high earlier this summer, are seeing the egg laying sites and flagging where the branch tips have broken near these sites.

While many are familiar with or perhaps heard of the the Colorado potato beetle (CBP), but did you know there is a false CBP?  See the pictures below to compare and contrast.