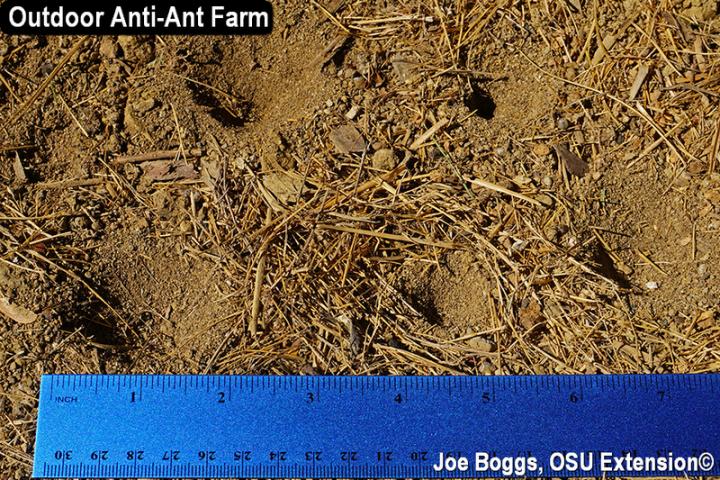 Last season, I posted a BYGL Alert titled, “Antlions Roar Again!” [Sept. 25, 2020] in which I described finding a large group of pit-trapping antlions (Myrmeleon immaculatus, family Myrmeleontidae) in southwest Ohio.  I lamented that the last time I saw a sizable collection of these fascinating sit-and-wait predators in Greater Cincinnati was in 2017. 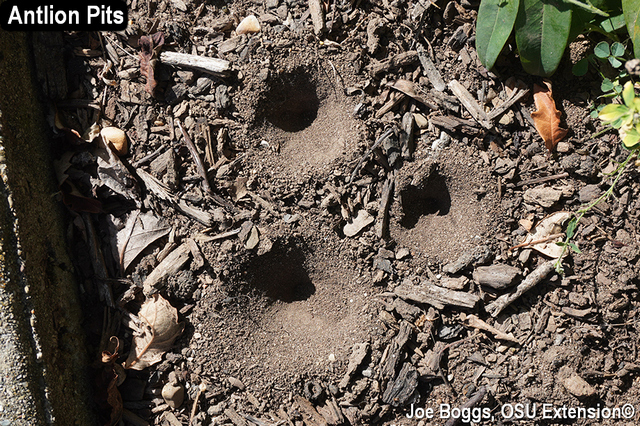 The genus name Myrmeleon is derived from the Latin for ant (mymex) and lion (leon).  The common name "antlion" refers to the larvae.  The grayish brown, slightly hairy larvae have armor-like plating and sport impressive out-sized, sickle-shaped mandibles which are necessary equipment for a predator. 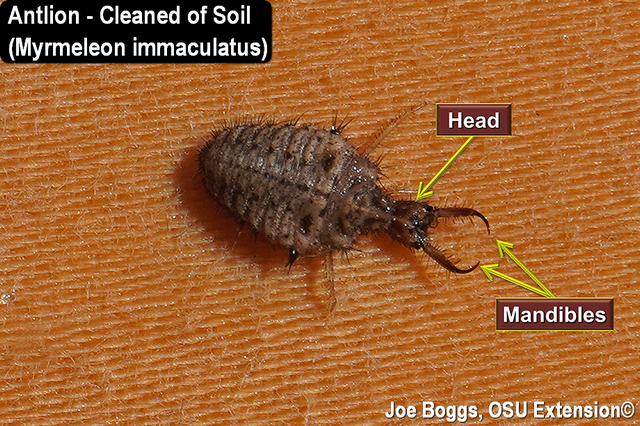 I was surprised yesterday to come across a large collection of antlion pits in my own landscape in the dry, loose soil sheltered by the outdoor overhang for our gas fireplace.  The pits are shown as the lead picture for this Alert.  I believe their location and appearance in the landscape is not coincidental, but more on that later.

I alerted friend and fellow antlion enthusiast, Ron Wilson (Natorp's Nursery Outlet & Landscaping, Mason, OH).  Ron has had a thriving population in his landscape for years and he checked his private stock and also found that pits have developed.  So, it appears antlions are now on the hunt (so to speak) in southwest Ohio.

Last year I collected several antlion larvae and housed them in a 7.5-quart latching plastic storage container partially filled with river sand.  I provided them with ant-meat in the form of field ants (Formica sp.) periodically collected from one of their characteristic shield volcano-like mounds. 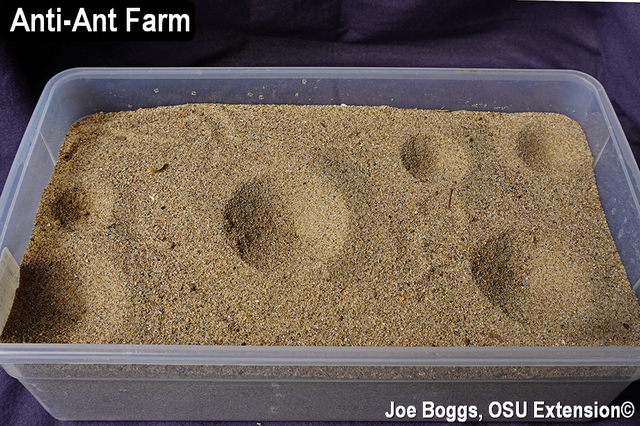 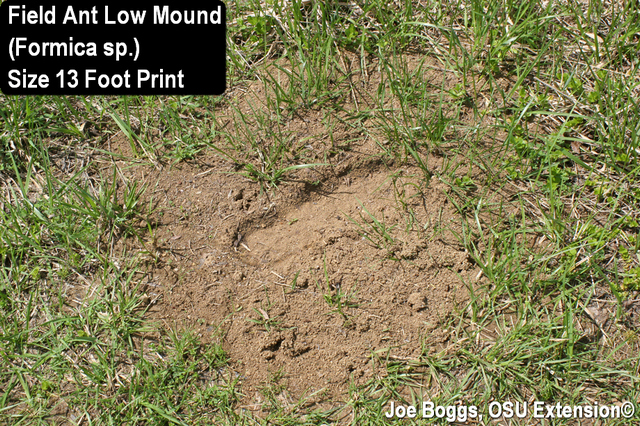 My indoor anti-ant farm allowed me to observe antlion behavior and photograph these captivating insects in action.  For example, I was surprised that it only took a single night for the antlions to create their pits once they were introduced to their new home.  I believe teachers could use indoor anti-ant farms to add another dimension to science in the classroom.

At the end of last season’s anti-ant farm photographic self-education experience, I deposited the sand with the antlions onto the soil next to my house.  Frankly, I had little hope they would survive the winter.  However, the site was right next to where the pits are developing this season.  Thus, their appearance and location are not coincidental.  I had established an outdoor anti-ant farm!

Antlions belong to the insect order Neuroptera (neuro = nerve, ptera = wing).  Adults have long, thin bodies that measure around 1" in length.  They fly at night, so they’re a rare find during the day.

I don't have a picture of an adult pit-trapping antlion, but I do have pictures of an adult Spotted-Winged Antlion (Dendroleon obsoletus).  Online resources claim their larvae live in "dry tree holes;" I'm not sure what that means.  However, the literature notes that they are not common.  Regardless, the adults have a similar body plan compared to M. immaculatus and you can see the "nerve wings" which is a feature shared with all neuropterans. 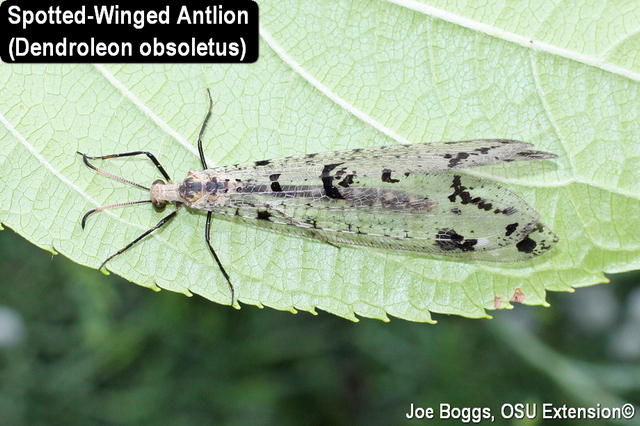 Female pit-trapping antlions insert their eggs into dry, powdery soil, or sandy soil.  Favored locations include loose soil near building foundations or around the base of trees.  The loose soil aids the antlion larvae in the construction of their pitfall traps.  I’m also convinced building overhangs and dense tree canopies reduce flooding; these are not aquatic insects. 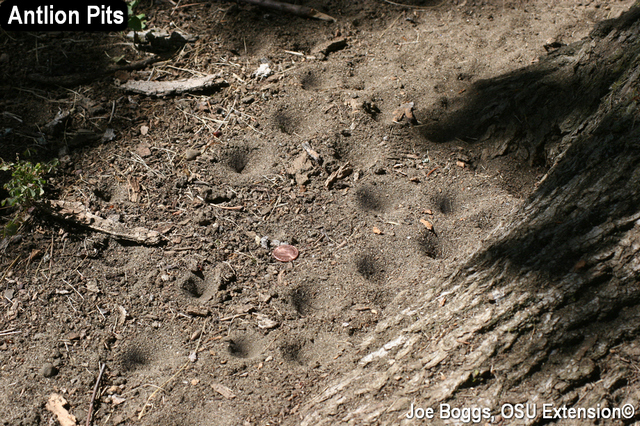 An interesting behavior that’s reported in the literature and I also observed in my indoor anti-ant farm is that while antlions are sit-and-wait predators, they will not sit too long.  If their pitfall traps fail to capture food, the antlions move.  To test this, I stopped feeding a couple of the antlions and after a few days, they moved and created new pits.  The image below shows the tracks left beyind by these wandering antlions. 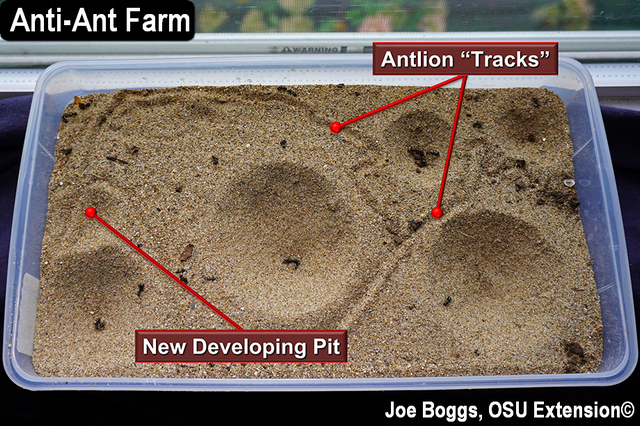 M. immaculatus larvae pass through 3 instar stages during their development which the literature notes may take as long as 2 years.  Before pupation, the last instar larvae construct soil cocoons by using silk to glue together soil particles.

The antlion’s legs only allow them to move backward.  They excavate their pitfall traps by moving backward in the loose soil in a spiral pattern and use their mandibles like tiny shovels to flip away soil.  If you pull an antlion larva from the soil, they will immediately try to cover themselves back up with soil. 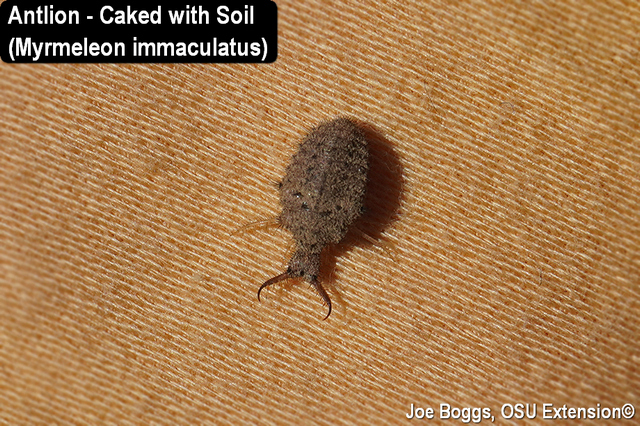 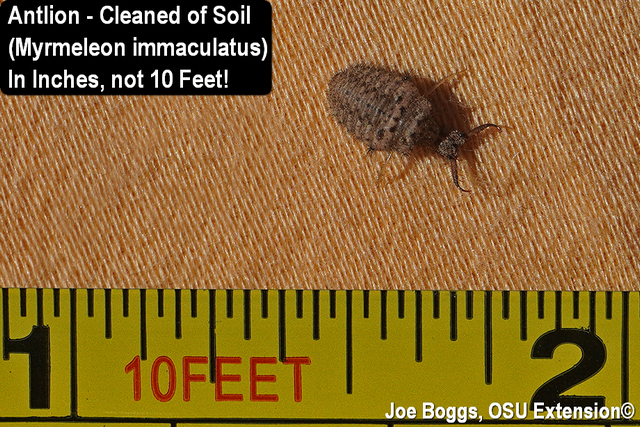 The antlions excavate a funnel-shaped pit, measuring around 3/4 - 2" wide and 1/2" deep, with the antlion buried at the bottom.  Only their wicked-looking mandibles are exposed. 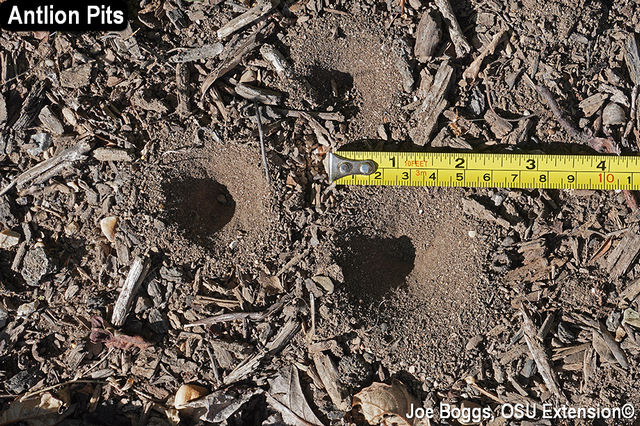 NOTE:  you can view antlions in action by clicking on the hotlinks at the end of this Alert.

When a potential prey blunders into the antlion’s pitfall trap, the loose dry soil particles provide no traction for escape.  As the prey struggles, the antlion keeps thrusting its sickle-shaped mandibles in the direction of the soon-to-be meat item. 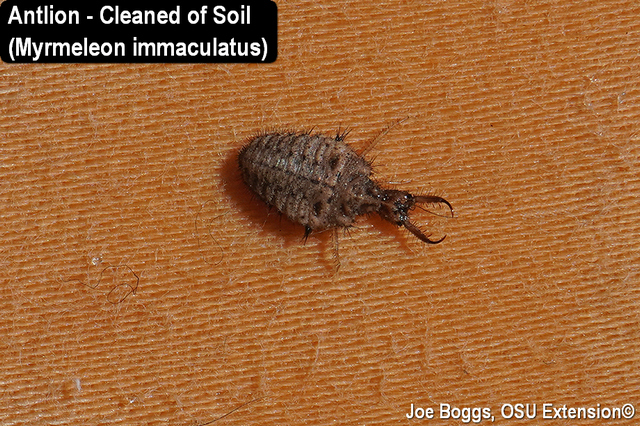 If the prey somehow evades the gnashing mandibles and attempts to escape the pit, the antlion makes violent flicks with its head and mandibles to toss soil particles onto the sides of the pit creating miniature landslides that carry their hapless victim into the vortex of doom.

The antlion seizes its prey and uses its sharp-pointed mandibles to inject a toxic brew of digestive enzymes.  This is no "The Princess Bride” story with a mostly dead Westley being saved by Miracle Max.  Once the antlion’s prey is injected, there is no recovery; it’s inconceivable!

The antlion extracts the essence of its doomed prey after the digestive enzymes do their work.  It then tosses the wrecked body out of the pit.  You can see past meals littering the landscape around antlion pits. 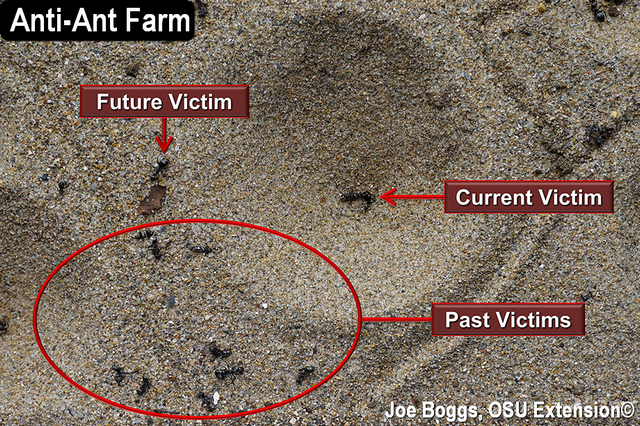 Beyond their namesake prey, antlions will try to eat anything that falls into their pits of despair.  This includes arthropods that are much larger compared to the antlion.

However, I was surprised to see that pillbugs (family Armadillidiidae) are the most prevalent prey item of antlions in my outdoor anti-ant farm.  These terrestrial crustaceans are heavily armored and as their common and family names imply, when threatened they roll into a pill-like ball which enhances their armored defense.  Based on the number of pillbug bodies I observed around the antlion pits demonstrated their heavy armor is no match for the antlion's sharp sickle-like mandibles. 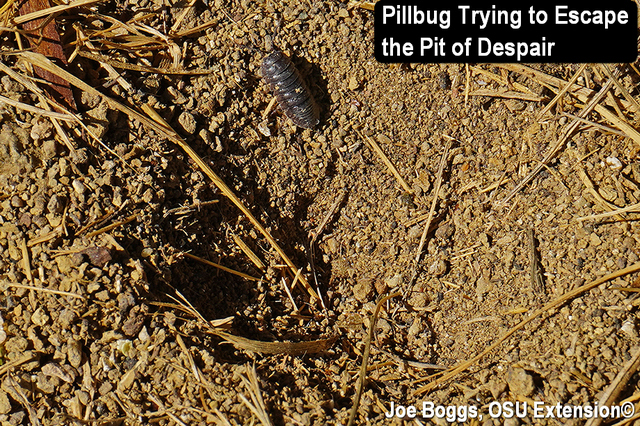 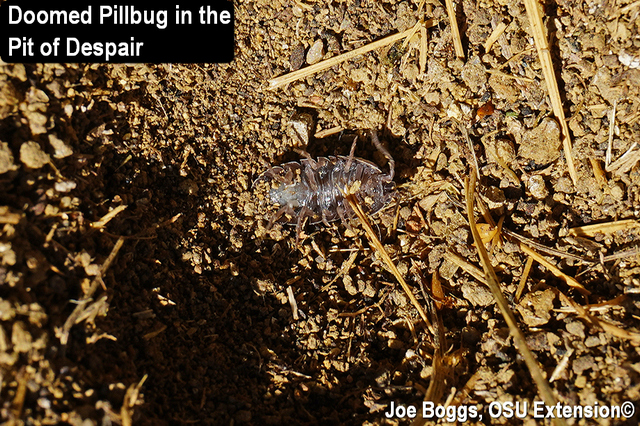 Look closely in dry soil beneath the roof overhangs of structures, or around the base of large trees.  If you find antlion pits, drop in a few ant-snacks to see first-hand what happens.  Antlions have great edutainment value.

*Here is a longer and more fascinating YouTube video posted on the Smithsonian Channel.  This is a "must watch" for antlion fans: