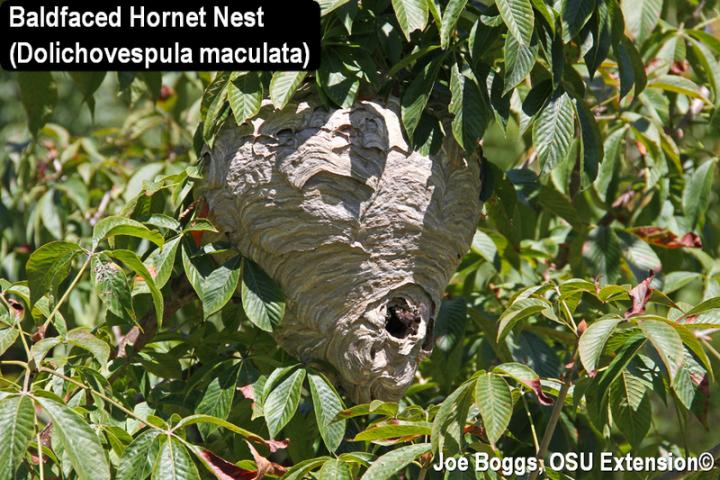 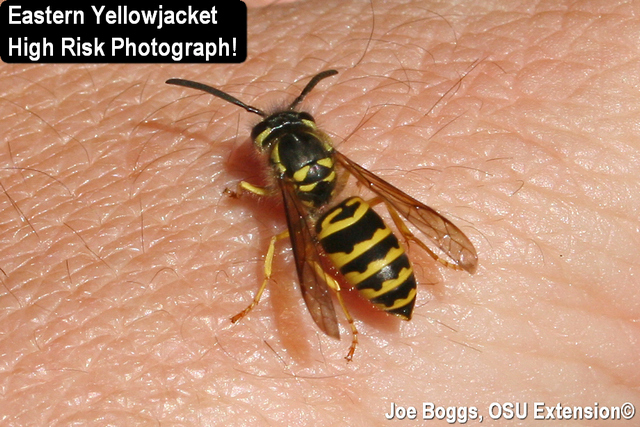 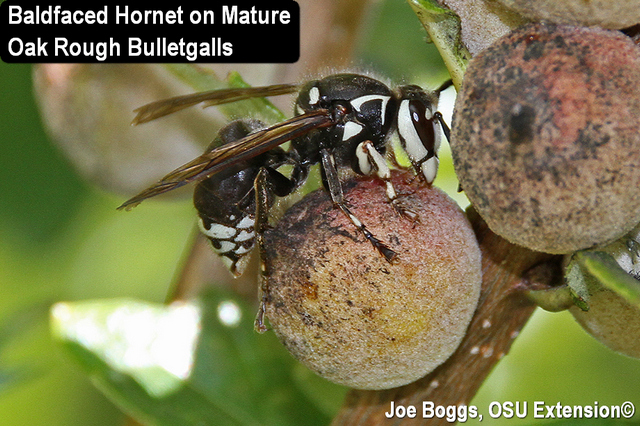 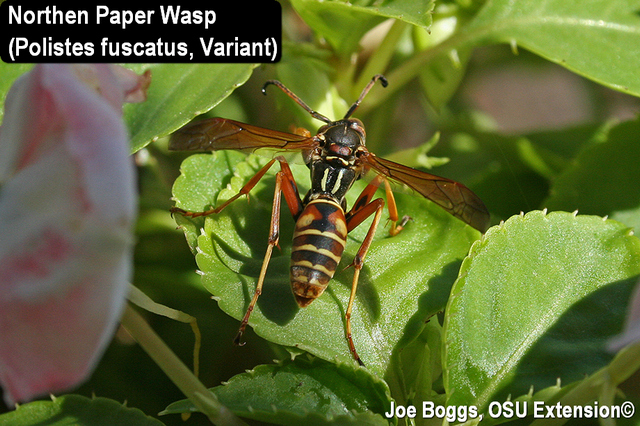 Note that baldfaced hornets are lumped in with yellowjackets.  That’s because “true hornets” belong to the genus Vespa.  The only true hornet found in Ohio is the non-native (obviously) European hornet (Vespa crabro).  Thankfully, the Asian giant hornet (V. mandarinia) has not been found in the Buckeye State, only in the Evergreen State. 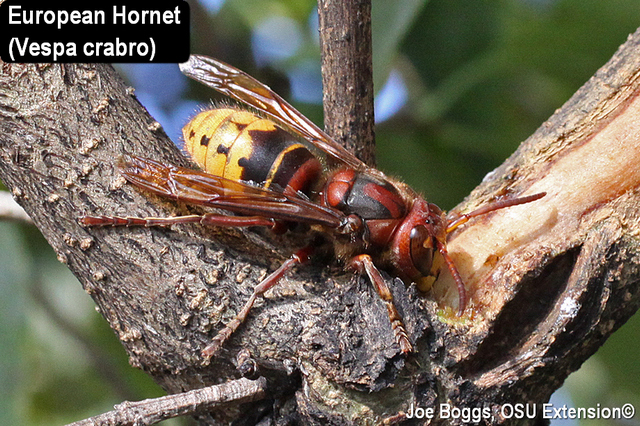 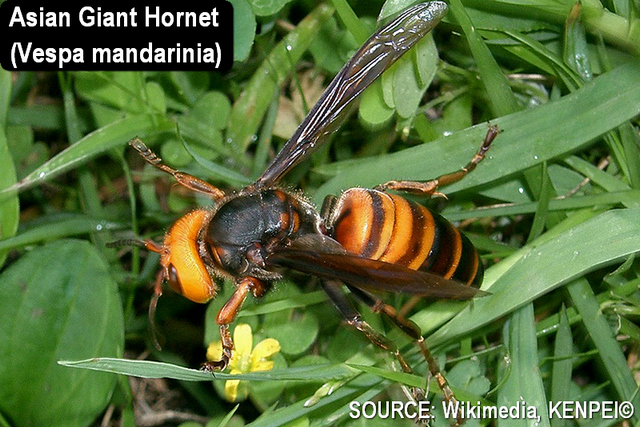 Despite their belligerent reputations, paper wasps, yellowjackets, and baldfaced hornets are seldom aggressive.  How would it benefit them to waste energy chasing after people?

However, wasps will defend their nests to the death, and they can sting multiple times before they die!  Painful encounters are commonly associated with poorly planned and executed efforts to wage war on these beneficial insects.  We're woefully outclassed because wasps have been defending their nests for hundreds of thousands of years.

Nest avoidance is the best option to avoid stinging confrontations.  I've taken pictures in several parks over the years of signs posted near an underground yellowjacket nest alerting the public of the yellow-and-black threat. 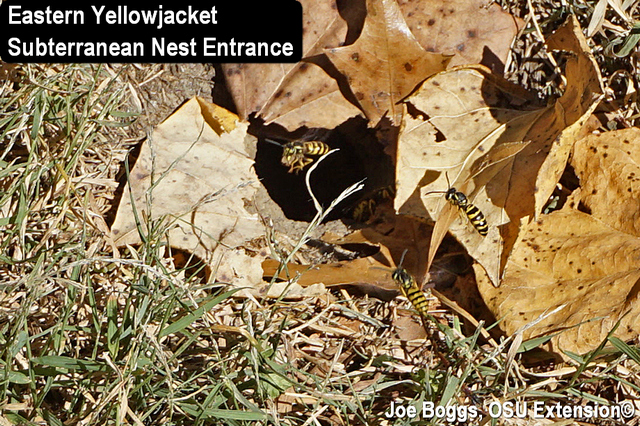 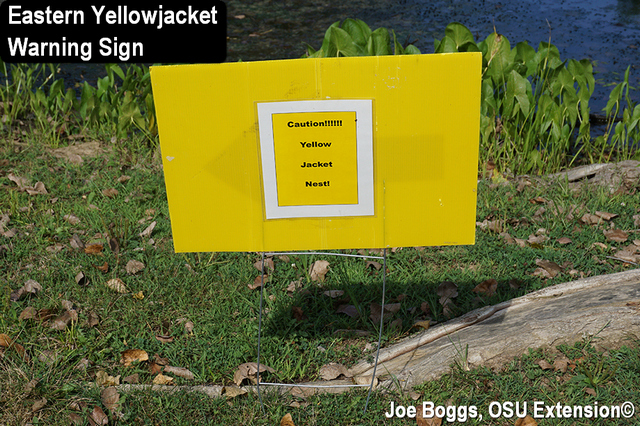 Of course, a sign isn’t needed to alert people of a large baldfaced hornet nest located next to a home entrance.  Wasps provide environmental services in the form of insect predation and to some degree plant pollination.  However, those services should not supersede human safety. 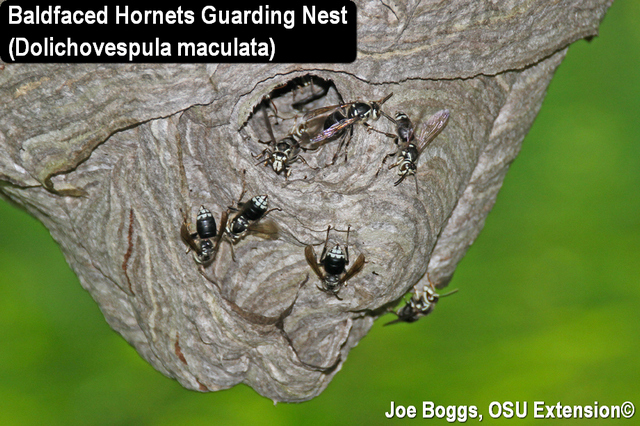 Personal safety should also be applied to nest elimination.  Suffering a mass attack is not a good time for people to learn if they are allergic to wasp venom.  A nest that threatens human safety should be eliminated by a professional.

This is the time of the year when wasps expand their nests at an exponential rate. The nests have been with us since the beginning of the season; however, the wasps were flying below our radar owing to small nests containing few individuals. 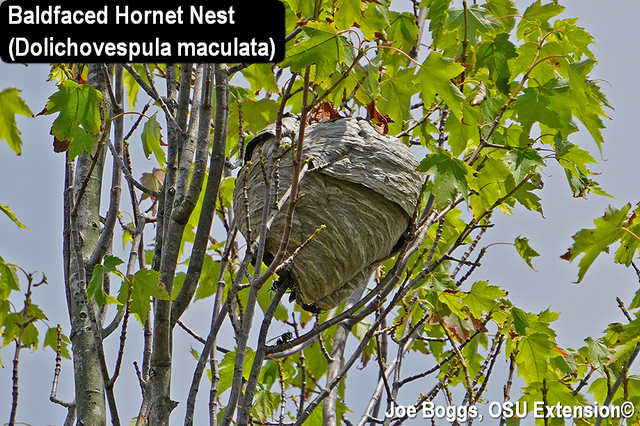 Wasps spend the winter as fertilized females (queens) in protected locations such as beneath bark, inside hollow trees, etc.  As spring temperatures warm, the queens leave their overwintering quarters to find suitable sites for nest construction.

The overwintered queens use their powerful mandibles to grind up fibers gathered from dead wood and plant stems which they mix with their saliva to extrude water-resistant paper used to construct their nests.  This construction technique continues to be used by the queen’s offspring throughout the spring and summer. 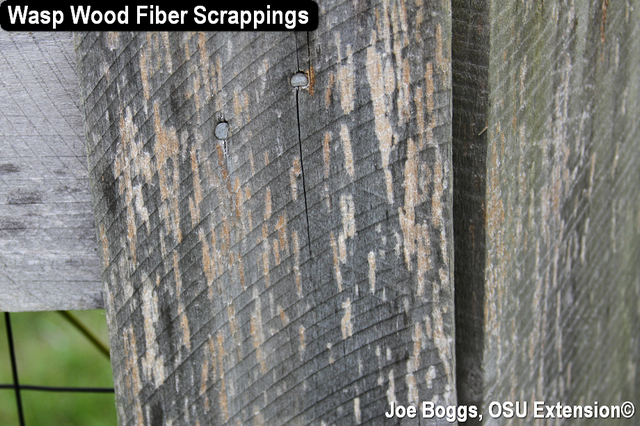 Early wasp nests are relatively tiny structures.  The elongated nests created by a baldfaced hornet queen may measure no more than 1 1/2" long.  She gets help as her offspring complete their development which takes around 20 – 25 days in the Midwest.

This single dominant queen receives even more help once subordinate queens develop.  Collectively, they lay more eggs that lead to more workers that lead to larger nests that lead to more eggs … etc., etc.  By mid-to-late August, the nests become large enough to be noticed, or not; sometimes painfully.  As the images below demonstrate, it’s amazing how baldfaced hornet nests can remain concealed by the foliage unless exposed by a fearless entomologist to allow a less fearless entomologist to take pictures. 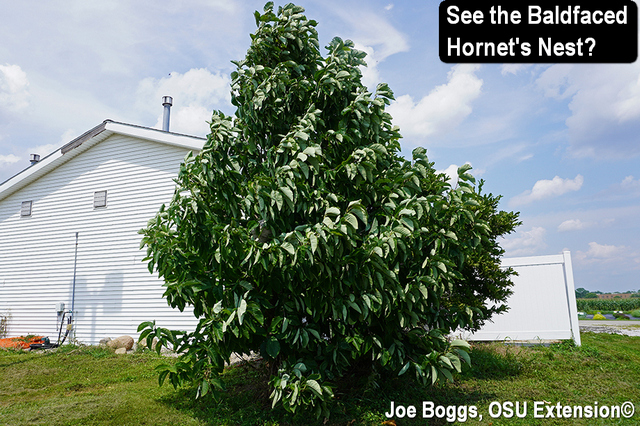 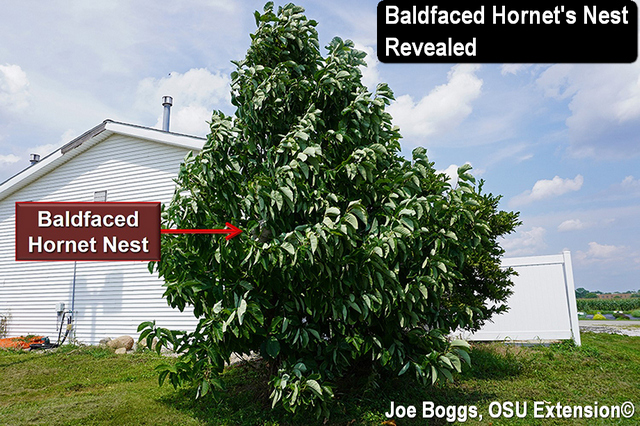 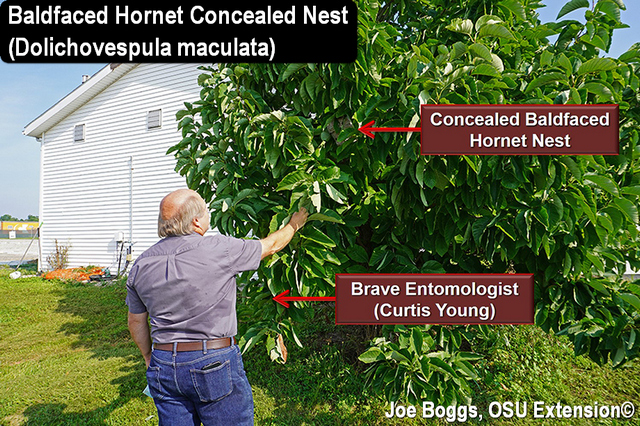 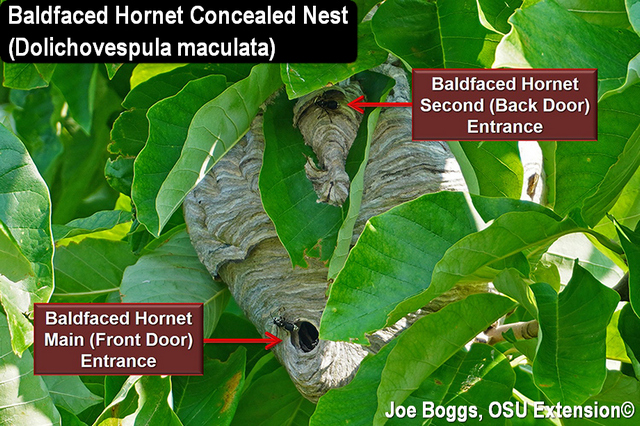 However, even the largest wasp nests are only used for only one season.  Eventually, the nests give rise to new queens and males (drones).  Once the new queens are mated, they fly to their overwintering sites leaving the workers behind to their freezing fate.

Paper Wasps, yellowjackets, and baldfaced Hornets are beneficial insects.  Wasps are significant predators because of their need to provide protein to their legless, helpless larvae awaiting food delivery in the nests.

The wasp workers forage for caterpillars, sawfly larvae, and other soft-bodied insects from late spring through the summer.  They use their powerful mandibles to grind up these protein-rich meat items to feed to their larvae so they will develop into new adults. 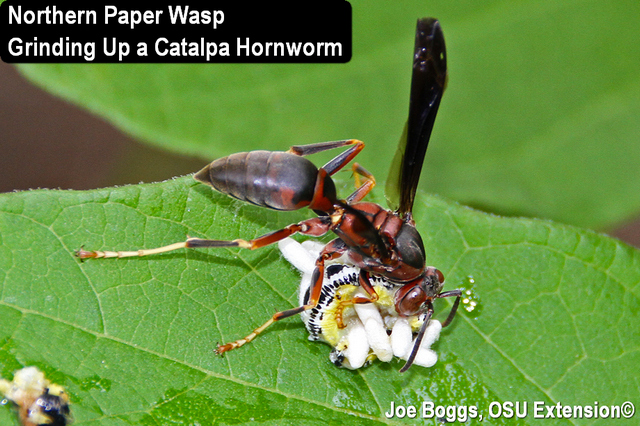 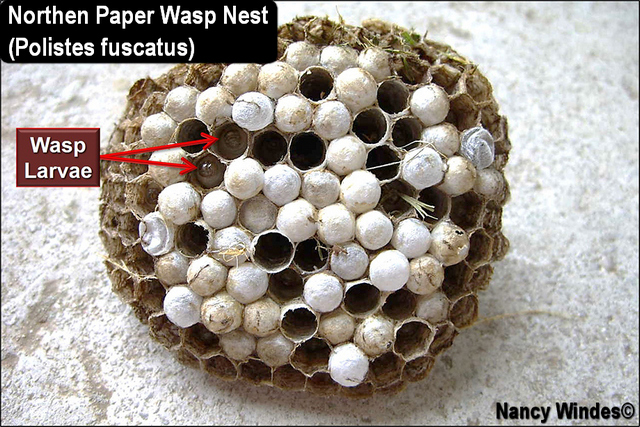 I once watched yellowjackets decimate a colony of redheaded pine sawflies (Neodiprion lecontei) with the sawfly larvae being carried off one at a time to become meat items for yellowjacket larvae.  I've also observed bagworm (Thyridopteryx ephemeraeformis) bags ripped open by baldfaced hornets to extract the caterpillar meat morsels inside. 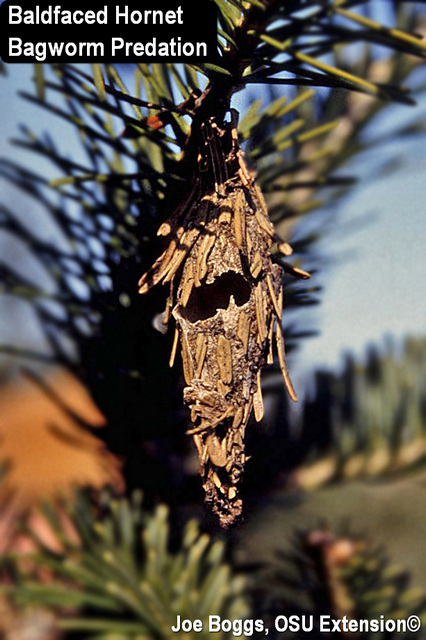 Paper wasps, baldfaced hornets, and occasionally yellowjackets also provide the added benefit of serving as plant pollinators.  They will visit flowers to feed on energy-rich nectar to support their predatory foraging and wood fiber gathering flights.  "Pollinator gardens” (a.k.a. butterfly gardens) are a rich location for photographing these wasps. 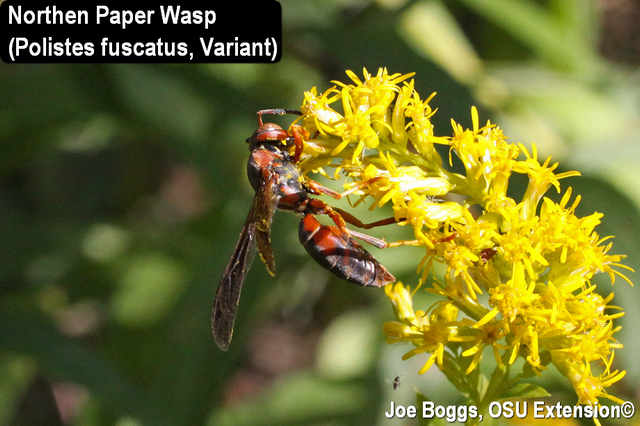 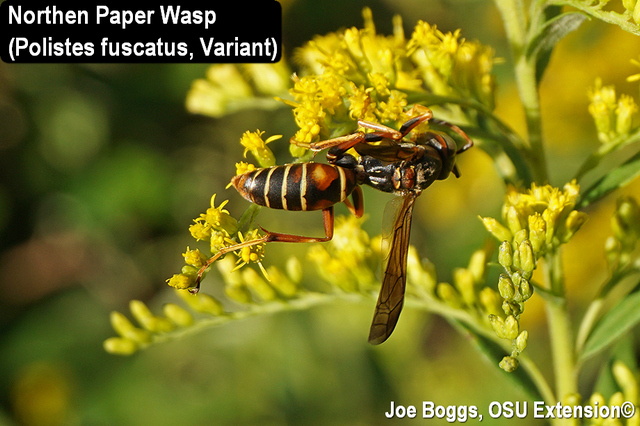 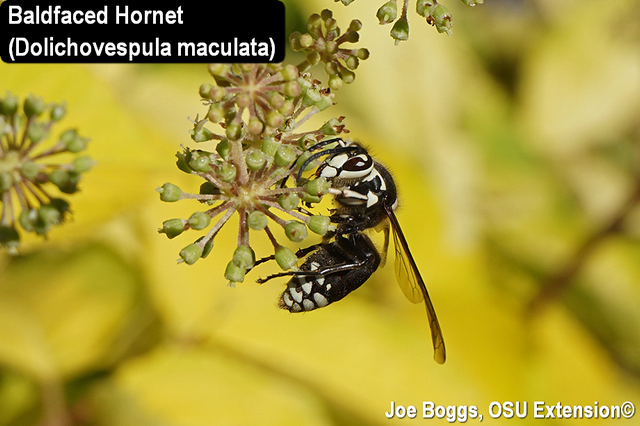 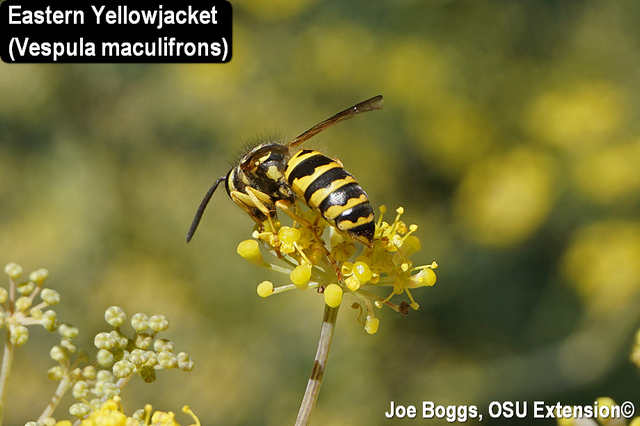 Unfortunately, yellowjackets and baldfaced hornets have a deserved reputation for becoming serious nuisance pests late in the season.  Once the drones and new queens complete their development in late summer to early fall, they do not need protein; they need energy from carbohydrates.

The royal newcomers lounge around the nest begging the workers for sweets.  To appease these freeloaders, the workers search for foods that provide an energy boost such as leaky hummingbird feeders, soda, donuts, funnel cakes, and adult beverages.  There are few things scarier than being chased by drunken belligerent baldfaced hornets decked out in their black leather jackets. 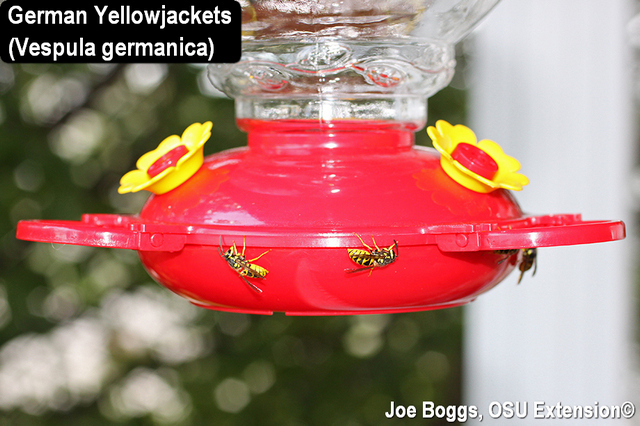 European paper wasps (Polistes dominula) present a conundrum.  The literature notes these wasps were first found in North America in the 1970's near Boston, MA.   They are now found throughout much of the U.S. and parts of Canada. 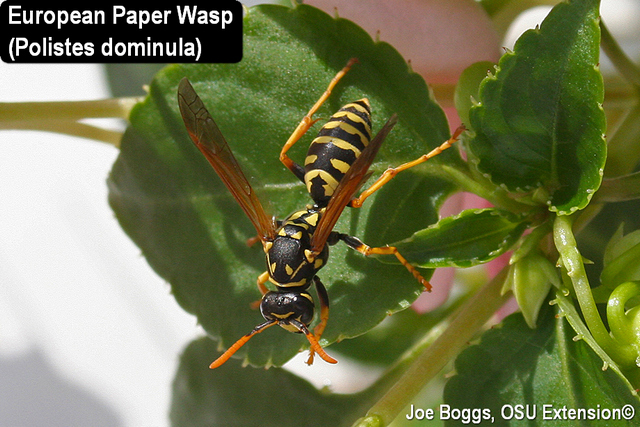 Like their U.S. counterparts, these wasps forage for meat in the form of caterpillars and sawfly larvae to feed their young.  However, they are highly aggressive meat-eaters and research has shown they will readily spirit away monarch butterfly (Danaus plexippus) caterpillars. 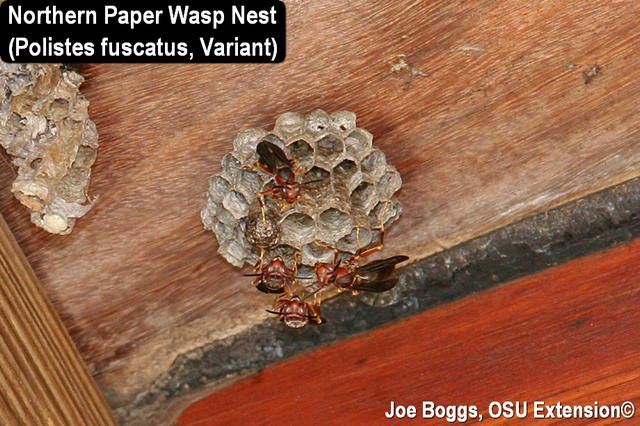 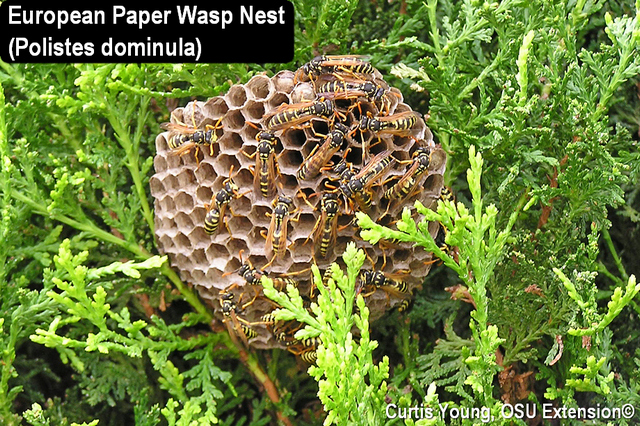 Paper wasp stings are painful.  However, stings by European papers wasps are even more painful because research has shown a correlation between their conspicuous warning coloration (aposematism) and the volume of their poison gland. 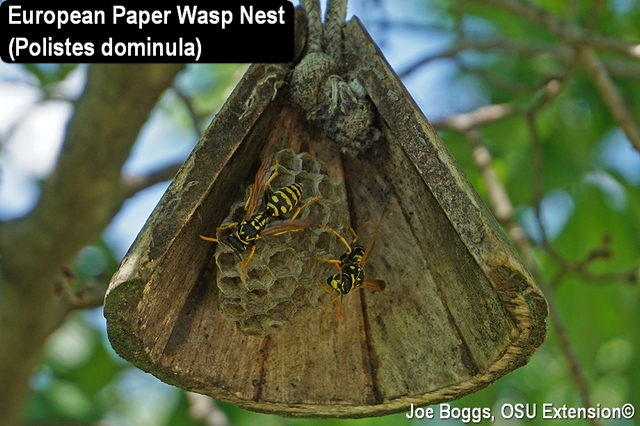 European hornets were first found in the U.S. in New York State around 1840.  Since that time, the hornets have spread to most states east of the Mississippi and a few states to the west.  European hornets are impressively large, measuring 1 - 1 1/4" in length. 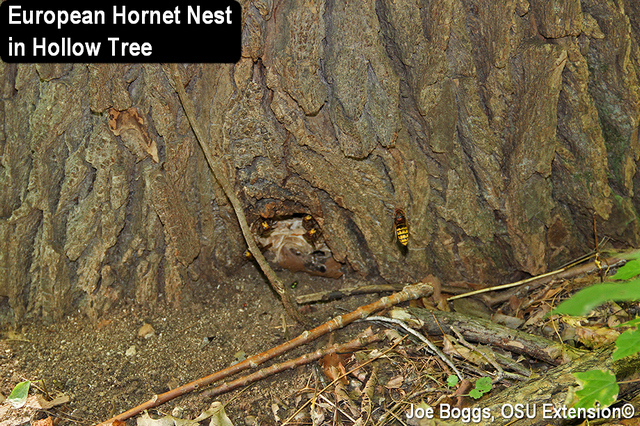 Like our native vespids, they will grind up soft-bodied insects to feed their young.  Unlike our natives, European hornets practice an unusual plant-damaging behavior.  They strip bark on the twigs and branches of trees and shrubs.  It is speculated that European hornets are extracting sugar from the phloem tissue.  The hornets will feed on a wide range of trees and shrubs including dogwood, lilac, and viburnums as well as ash, birch, boxwood, horse chestnut, and rhododendron. 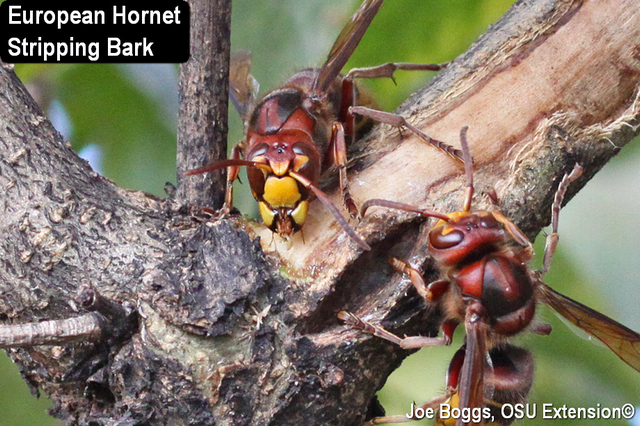