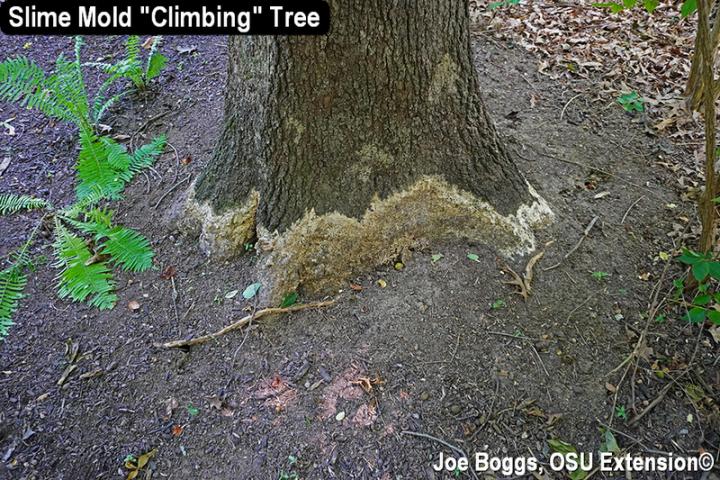 Last week, Pat Migliozzi (State Service Forester [extraordinaire], Ohio Department of Natural Resources) and I looked at an oak tree showing a most unusual symptom.  The base of the tree looked like it had been dipped in white paint.

The homeowner as well as a tree care professional were concerned the tree was suffering from a fungal infection, possibly an infection by a root rot or interior rot fungus.  However, a close inspection showed the white matting to be a dehydrated slime mold.  Pat and I looked around and found the same slime mold condition on two nearby trees as well as a cut piece of wood on the ground. 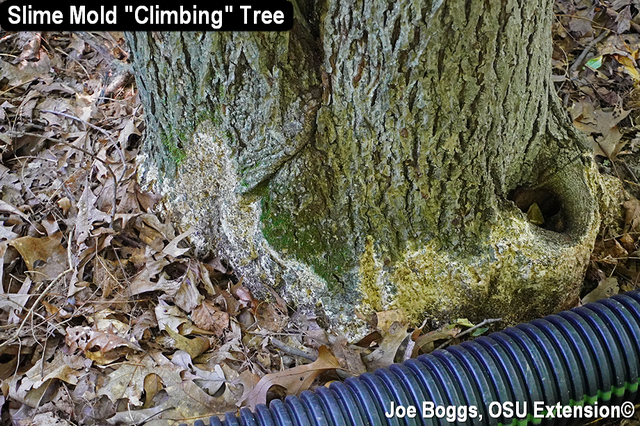 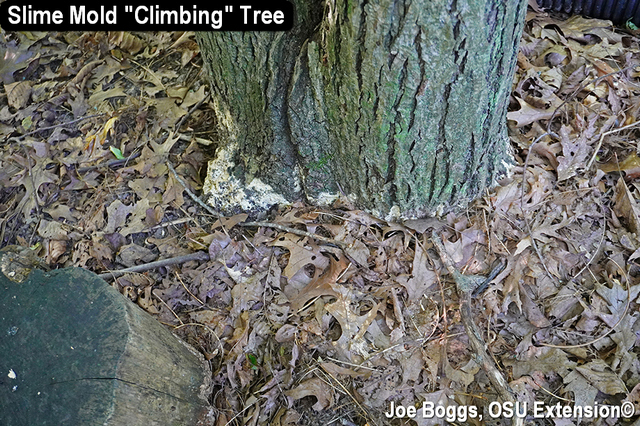 Slime molds are fascinating ancient organisms that were once classified in the Fungi Kingdom.  However, these micro-nonconformists were eventually booted from that Kingdom to eventually settle in the Kingdom Protozoa.  There they live in the autological Phylum, Amoebozoa.  Of course, that’s only according to some taxonomists; they are a fickle lot.

Slime molds begin their life’s journey as a spore that germinates to form a single-celled amoeba (plural = amoebae) that consumes bacteria.  The amoebae continue to divide and live as single-celled organisms if there’s plenty of food.  However, if they run out of bacteria-food and there’s lots of moisture available, they become something very different.

The starving slime mold amoebae gather in a large multicellular glob known as a plasmodium (plural = plasmodia) that moves en masse.  The classic 1958 science fiction horror film, The Blob, provides a good visual.  However, instead of dissolving citizens of small communities in PA until being extinguished by Steve McQueen, the creeping slime mold hunts down, engulfs, and dissolves more bacteria.

One of the best-known slime molds, Fulgio septica, is commonly observed creeping across mulch in landscapes.  Gardeners may recognize this slime mold by its descriptive common name, the dog vomit slime mold. 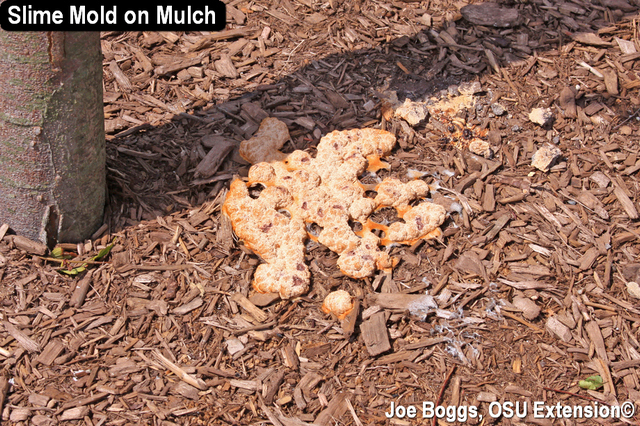 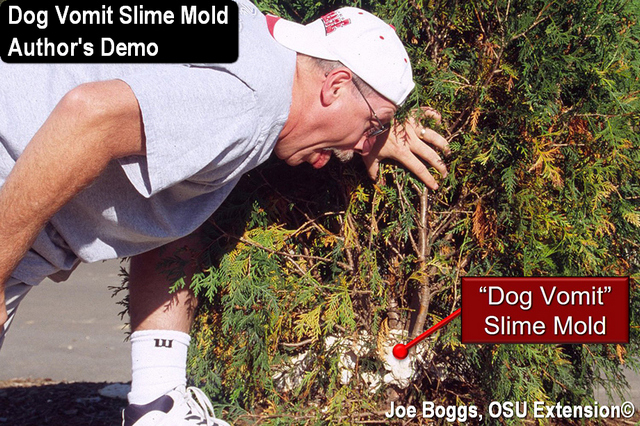 Although we commonly find slime molds on the surface of mulch in landscapes, the plasmodia can creep across any horizontal surface including concrete.  However, the plasmodia can’t move about without plenty of moisture which is why we often see slime mold blobs after extended periods of rainfall or in irrigated landscapes. 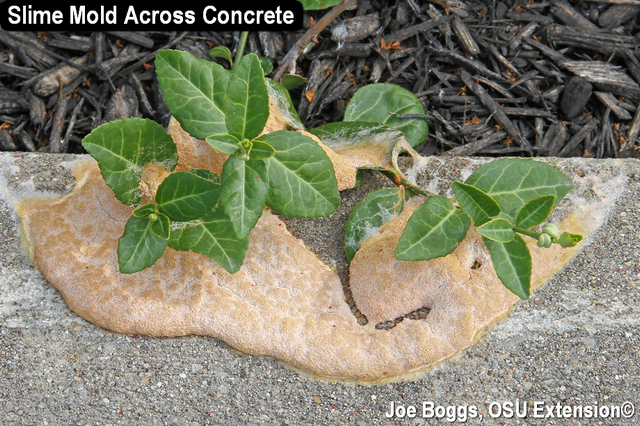 Once the slithering plasmodium depletes its food supply, the slime mold enters its next stage.  The mold-blob migrates to a location where spores can be released and dispersed.  It forms a foamy-like fruiting structure, called a sporocarp, which is composed of stalked spore cells. 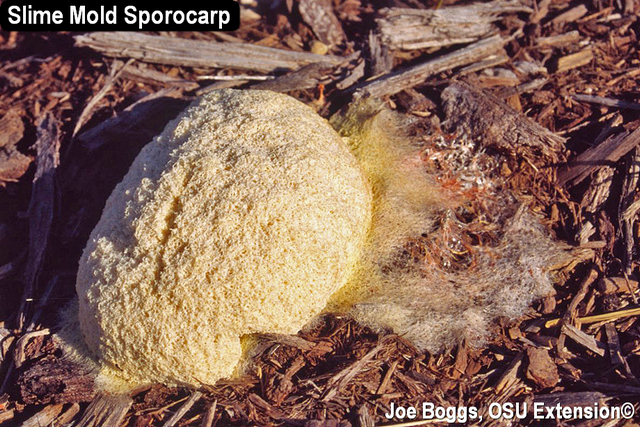 The sporocarp is a “frozen” structure; it does not move like a plasmodium.  So, before forming the sporocarp, the plasmodia may “climb” vertical structures including tree trunks or it may appear to ooze up the stems of herbaceous perennials or annuals.  This is the stage Pat and I observed on the oak and surrounding trees in the homeowner's wooded area. 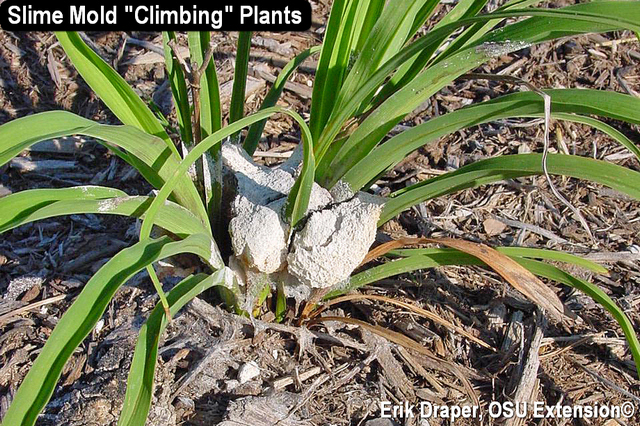 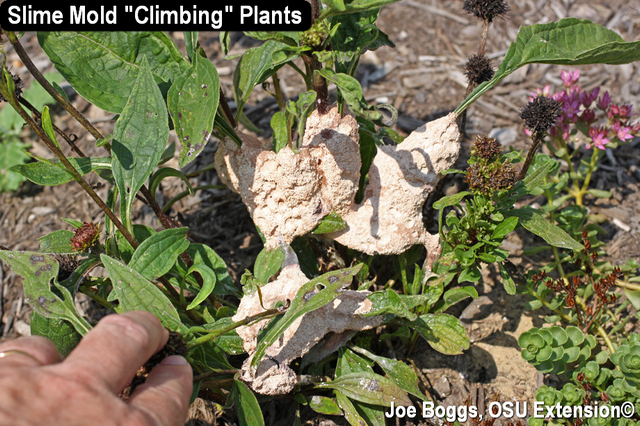 Interestingly, the oak also showed a non-threatening unrelated fungal disease known as “smooth bark.”  The condition is produced by fungi belonging to two genera, Aleurodiscus spp. and Dendrothele spp.  The fungi only digest the outermost portion of the non-living bark.  They cause no harm because they do not invade living tissue.  Of course, the occurrence of the smooth patch was not related to the slime mold. 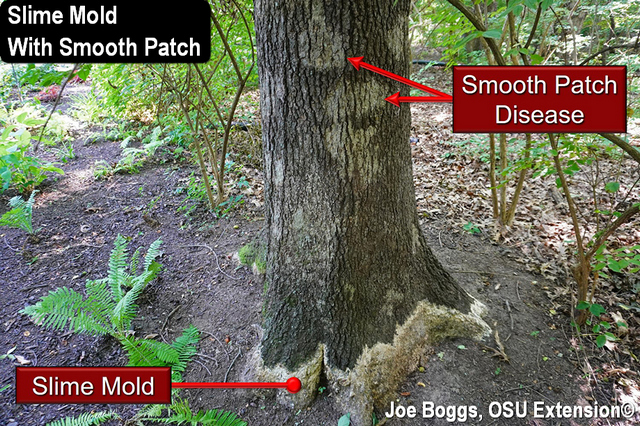 Pat also noticed the peculiar pattern of the smooth patch provided a good example of pareidolia.  This is where people see face-like images in inanimate objects, and it relates to how our brains are hard-wired.  However, I didn’t see it. 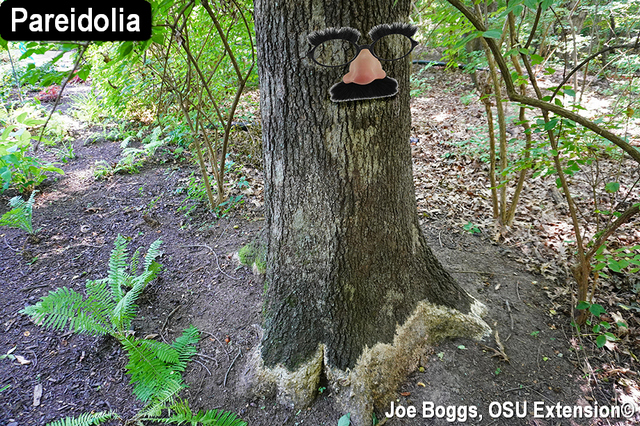 The bottom-line regarding slime molds is that they are not pathogenic; they don’t harm plants.  Instead, they along with pareidolia can add an interesting dimension to forest walks if you know what to look for and where to look.  Jim Chatfield (Associate Professor Emeritus, OSU Extension) and I used to do a presentation series for which we were uniquely qualified titled, “Weird Things in the Woods.”  Slime molds certainly fit the topic.

There has been a great deal of research on slime molds in recent years yielding some interesting and surprising results.  A nice encapsulation was provided by the NPR program “Science Friday” on 12/06/2019 in a segment titled, “The Most Charismatic Single Cell You’ll Meet Today.”  It’s worth a listen because it shows why slime molds are indeed very weird things in the woods.

Here’s the hotlink to the segment: