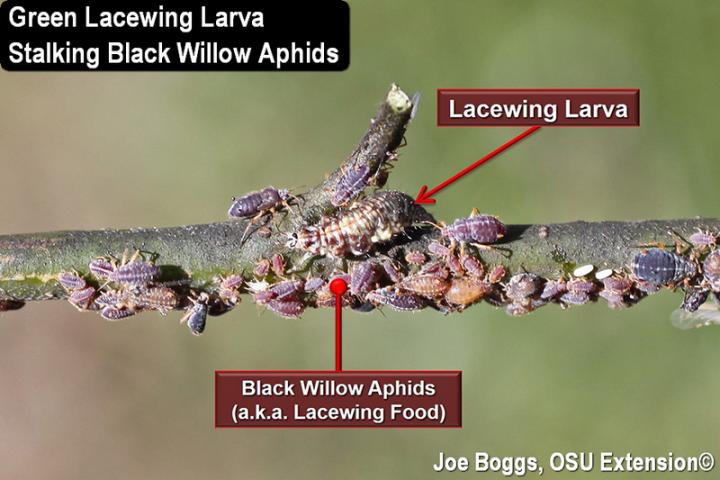 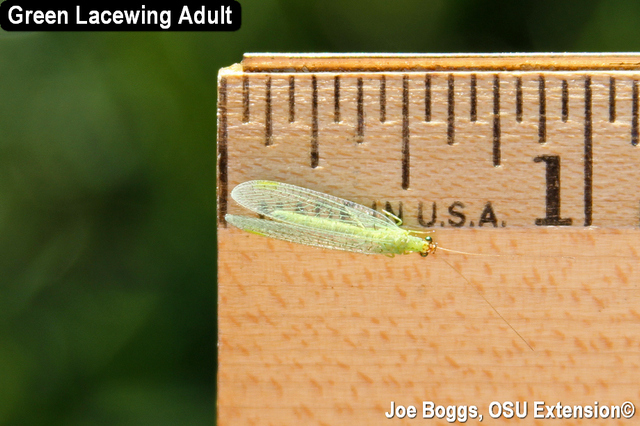 The common names were based on the color of the adults and although this color coding between the two families was eventually found to be unreliable, the common names stuck.  Both families include wolfish predators; however, I’m going to focus on the green lacewings because they are the lacewings most frequently encountered in Ohio.

As with all Neuropterans, green lacewings develop through four stages:  egg, larva (larvae plural), pupa (pupae plural), and adult.  This is known as complete metamorphosis referencing the complete change in form that occurs during the pupal stage.

Green lacewing adults are poor fliers, active at night, and feed on pollen, nectar, and honeydew exuded by the sap-sucking prey favored by their larvae.  Some species are predaceous as adults to a limited extent.

However, the larvae of all species are voracious predators.  They’re equipped with wicked-looking sickle-shaped mandibles that project forward in front of the head.  The hollow, or grooved mandibles are used to seize, pierce, and extract the juices of their hapless prey. 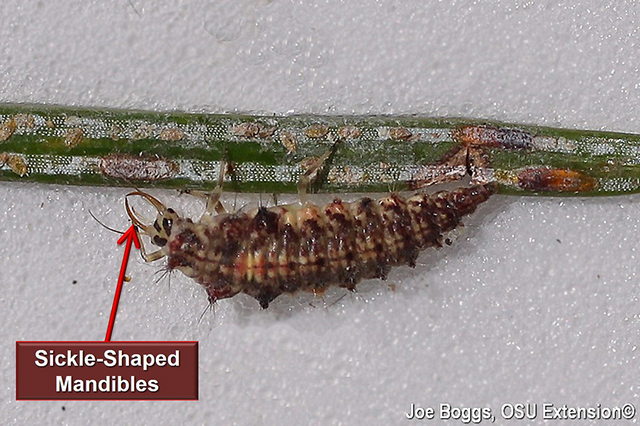 Green lacewing table fare includes anything the rapacious larvae can wrap their mandibles around such as small caterpillars and beetle larvae, lace bugs, scale crawlers, mealybugs, spider mites, and insect eggs.  It’s a long menu but aphids are a favorite meat item which is why the larvae of some green lacewing species are called “aphid-lions.”

The green lacewing larvae come in two forms depending on the species.  So-called “naked” larvae have elongated spindle-shaped bodies covered in intricate markings which are thought to provide camouflage from other predators including birds.  Look closely at aphid colonies for these stealthy hunters stalking their aphid prey. 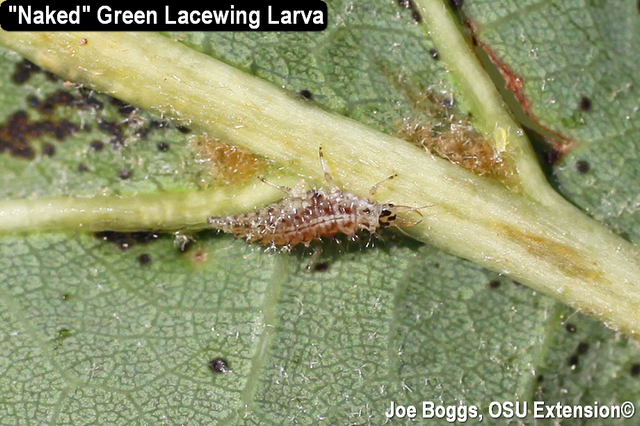 Other lacewing larvae carry camouflage to another level by covering themselves in debris.  These so-called “debris-carriers” have short bristles which are festooned with a wide range of materials.  Depending on the species, this material may include sand or soil particles; small pieces of dried leaves, wood, or lichens; and silken threads from spiders or mites. 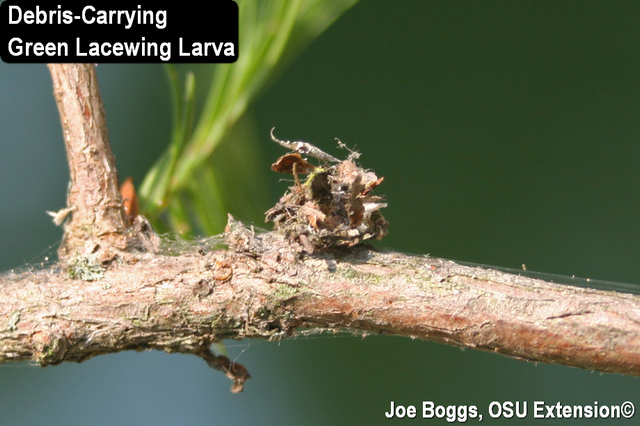 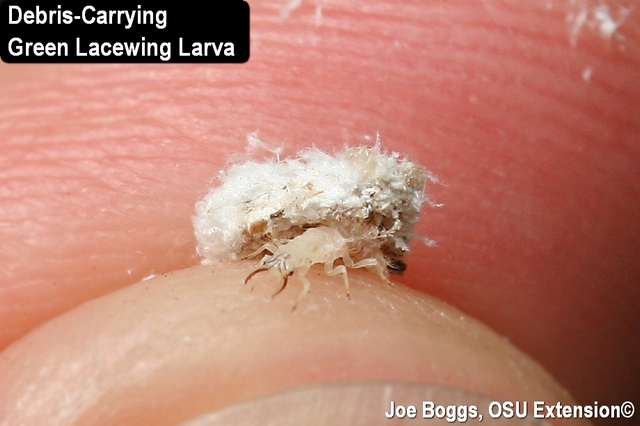 My favorite debris carriers are those that exemplify “you are what you eat.”  These lacewing larvae cover themselves in the waxy white filaments stripped from their woolly aphid victims or the actual crumpled bodes of their aphid victims. 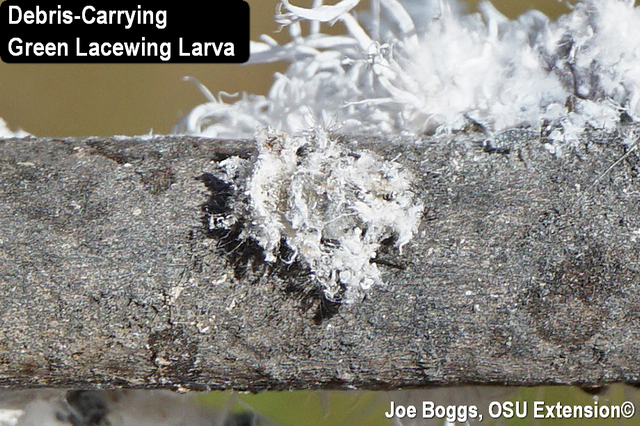 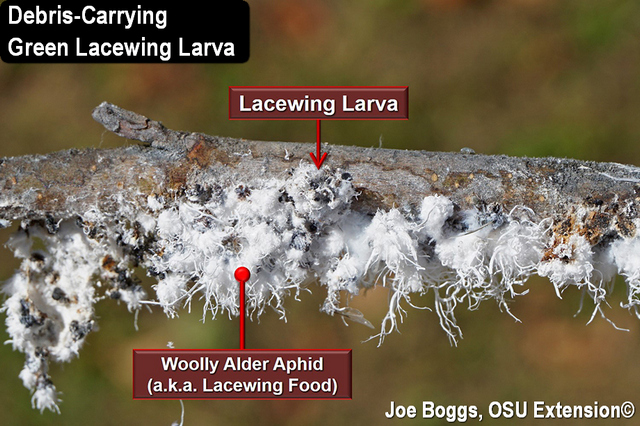 It’s generally presumed the debris camo hides them from predators such as birds.  I’ve also heard speculation the dead-aphid camo may allow them to get closer to their prey.  Of course, this would mean aphids aren’t very bright.

Green lacewing larvae develop through three instar stages and pupate inside round cocoons constructed with loosely woven silk.  The cocoons may be found attached to plant leaves, stems, or under loose bark.

The green lacewing life cycle starts over again when newly emerged and mated females lay their white oval-shaped eggs perched on the tips of hairlike stalks.  It’s believed this arrangement places the eggs out of reach of early hatching first instar lacewing larvae.  Remember the lacewing larvae will feast on anything they can wrap their sickle-shaped mandibles around including their nascent siblings. 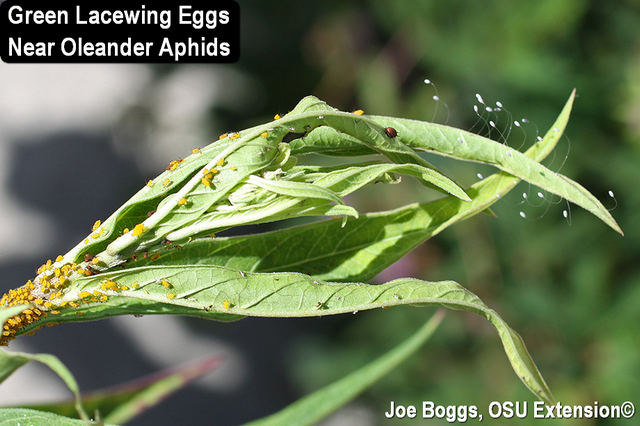 The eggs are either laid singly or in small groups usually positioned within or near the lacewing’s prey.  Green lacewing females lay 100 to 300 eggs during their lifetime and they may have several generations per season.  This coupled with prodigious predatory appetites means naturally arising lacewing populations can have a significant impact on the populations of their prey. 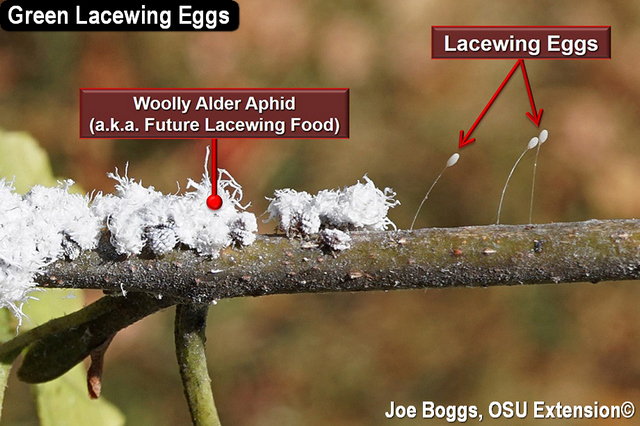 Green lacewings have also long been commercially available for release as biocontrol agents targeting aphids and other soft-bodied insects.  Unlike lady beetles which can fly away, lacewing larvae stay put until they pupate and winged adults emerge. 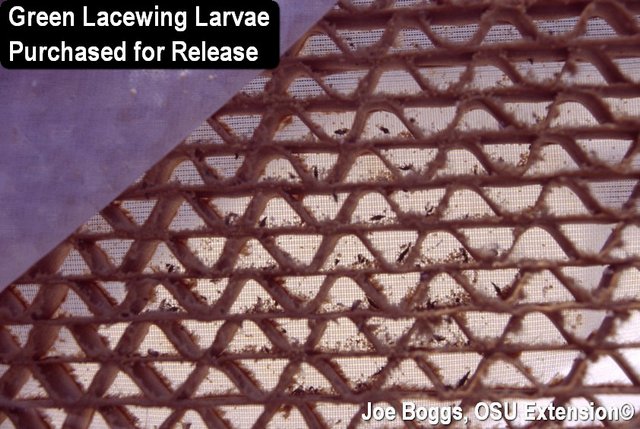 Releasing lacewings has been shown to be an effective management tactic for certain greenhouse pests as well as a few field pests.  However, there are several things to consider before relying on these bio-allies.

First, both eggs and larvae may be purchased.  These are living organisms and should be handled in a way that does not lead to their demise before they are released.  Most suppliers provide clear instructions that should be closely followed.

Second, eggs take time to hatch and should be applied in the very early stages of target pest development.  For example, waiting until a full-blown aphid outbreak before "seeding" lacewing eggs means the lacewing larvae that hatch may not have a significant impact until there is significant plant damage.

Finally, lacewing larvae should be released when there is ample food to keep them from feasting on each other.  This presents a risk for plant damage to occur before the lacewing larvae gain the upper hand.  Experience is a good teacher.  It may be helpful to seek advice from others who have successfully used lacewings in their pest management programs.