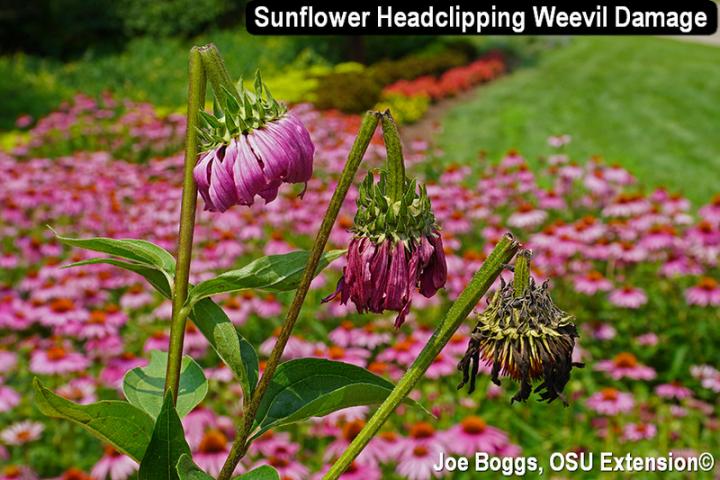 The sunflower headclipping weevil (Haplorhynchites aeneus) is a well-documented native pest across the Great Plains where it attacks cultivated and wild sunflowers (Helianthus spp., family Asteraceae).  The weevil reared its ugly snout in Ohio several years ago, but not as an agricultural pest.

We first saw the weevil apply its peculiar decapitating behavior to purple coneflowers (Echinacea purpurea) in mass plantings in landscapes, naturalized areas, and cut-flower production.  Coneflowers continue to be a common host in Ohio; however, the weevil has also moved on to other members of the aster family, particularly plants belonging to the Silphium genus. 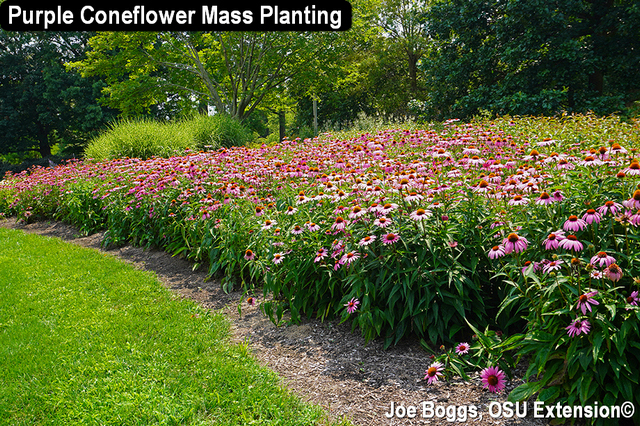 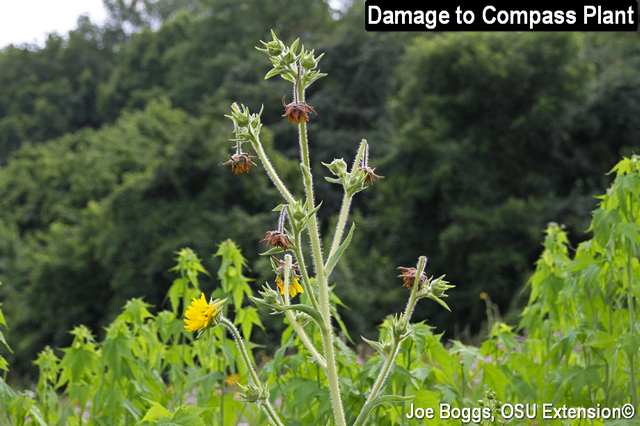 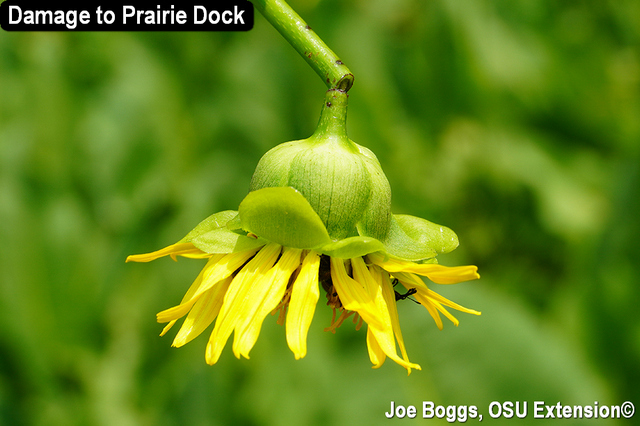 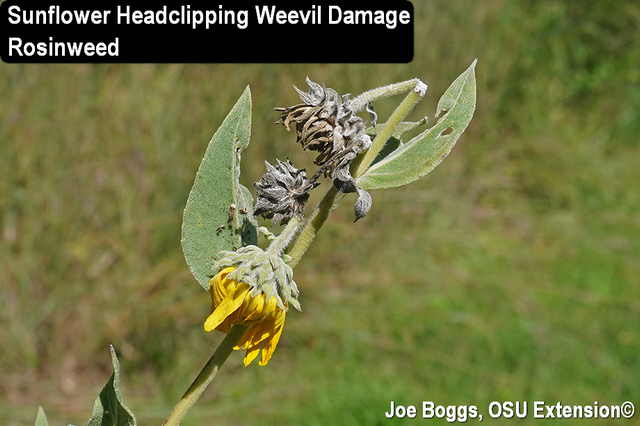 We also occasionally see the weevil attacking common ragweed (Ambrosia artemisiifolia) and giant ragweed (A. trifida).  I originally believed this only occurred near mass plantings of more preferred aster hosts, but I’ve also observed damage on ragweeds that are growing far from coneflowers or Silphium spp. 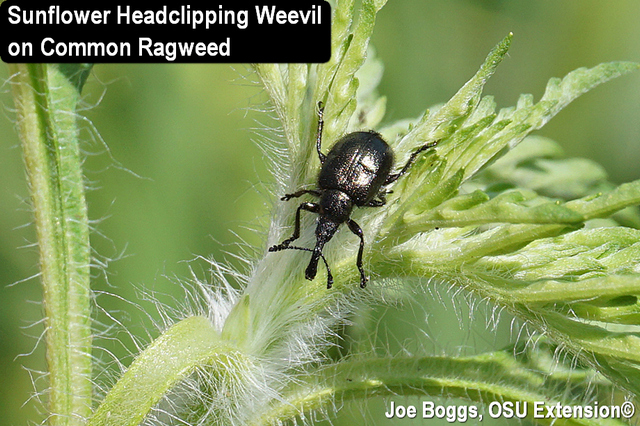 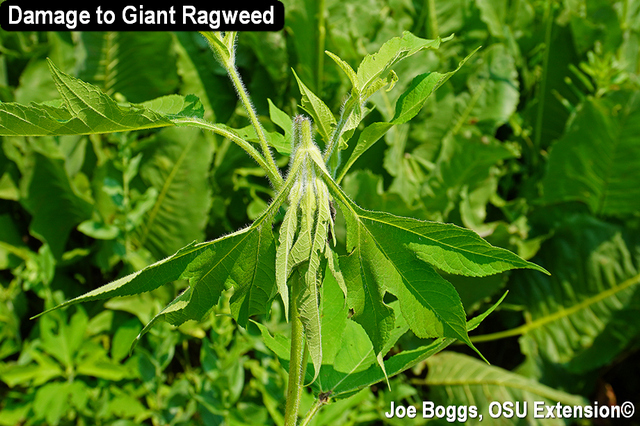 The weevils have been active in southwest Ohio for a couple of weeks; however, their unusual handiwork is just now becoming apparent, particularly on purple coneflower.  The damage includes dangling flower heads and stems that looked like soda straws.  “Headclipping” accurately describes the plant-damaging behavior of this weevil. 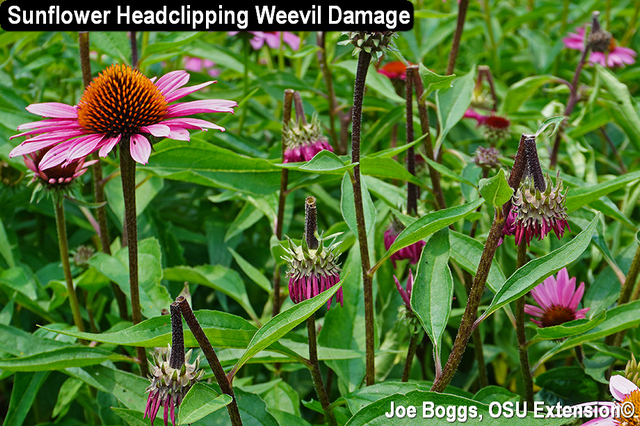 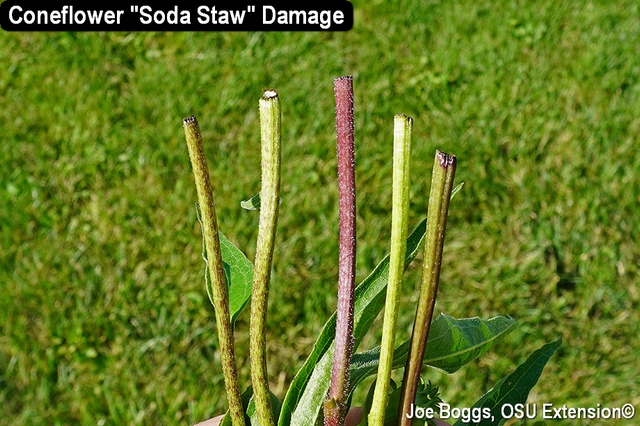 The shiny weevils range in color from black to copper brown.  In fact, the specific epithet, aeneus, means "bronze-colored."  They measure a little over 1/4" in length which includes an exceptionally long, curved snout.  As with all weevils, this beetle's mouthparts are located at the end of their snout (rostrum). 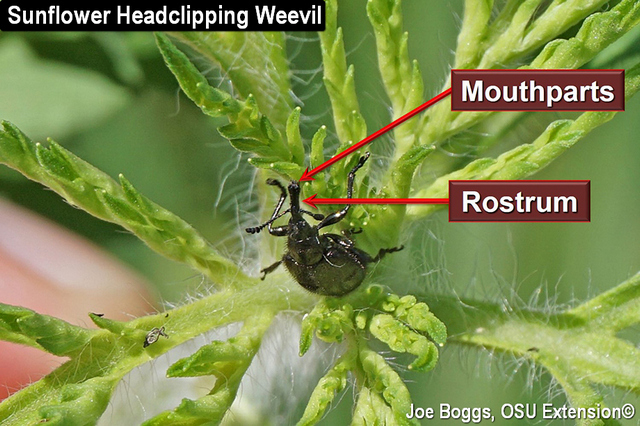 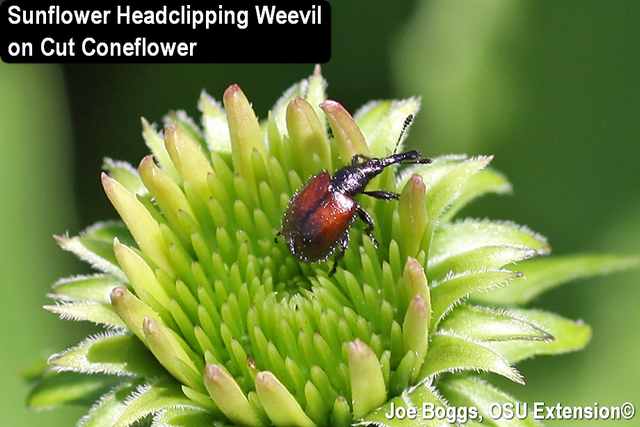 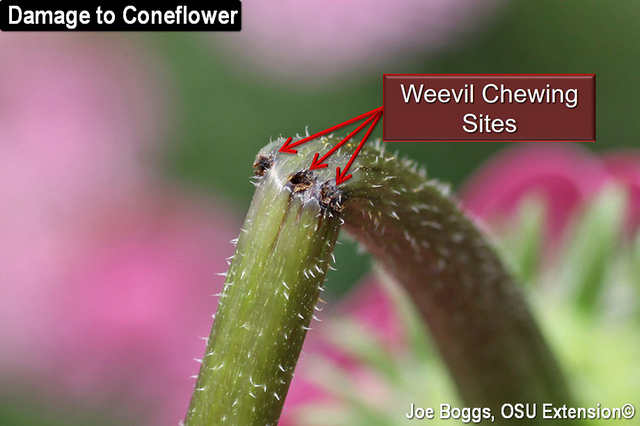 Some plants appear to be capable of mounting a defense against the weevil's stem-cutting behavior by exuding copious quantities of sticky, resinous sap.  I photographed a dead weevil last year that appeared to be stuck in the gluey sap issuing forth from holes the luckless weevil had chewed into a prairie dock stem.  However, the second photo below was taken on prairie dock earlier this week and shows a weevil ignoring the potential for a sticky disaster in pursuit of its headclipping mission.  Or, the weevil is just not very bright. 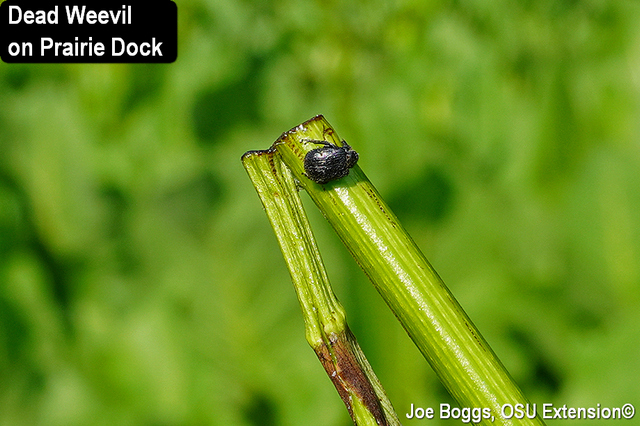 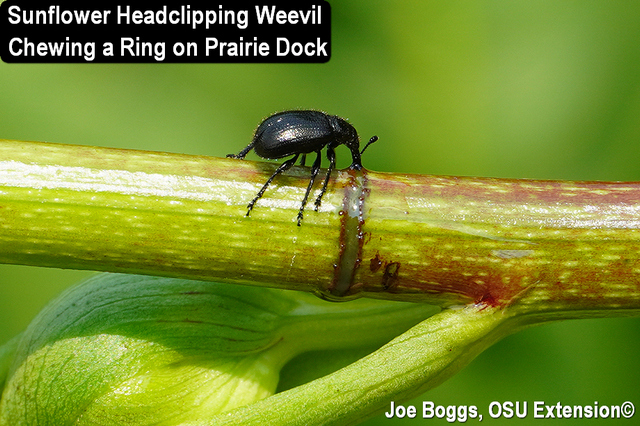 If females are successful with weakening the flower stems, they then lay eggs on the dangling head.  As you see in the image below, cut flower heads may attract numerous females. 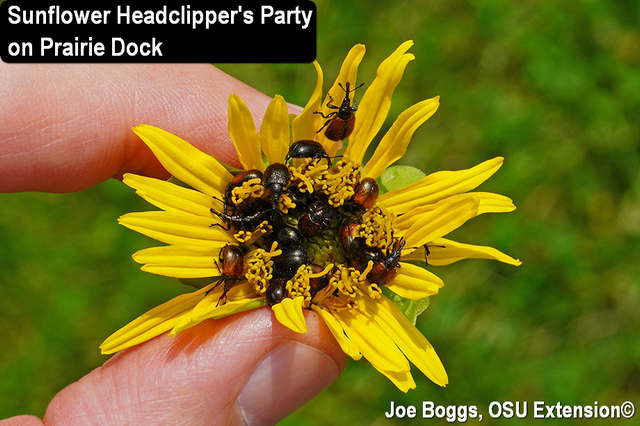 Eventually, the flower head breaks from the stem and drops to the ground.  Heavily de-flowered coneflower plantings look like a collection of soda straws. 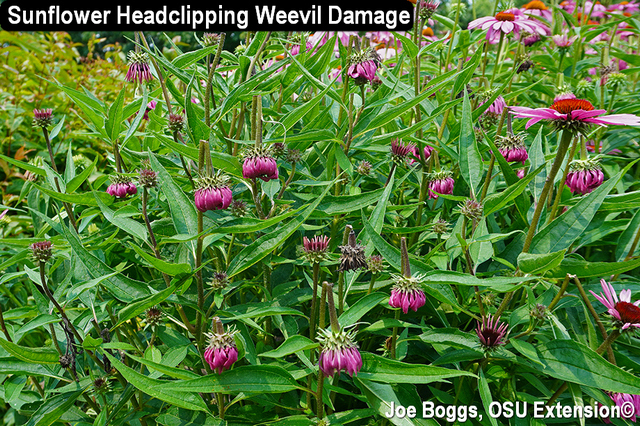 The eggs hatch after the flower heads drop to the ground and the weevil's grub-like larvae feed on the decaying flower head tissue.  It is speculated that the weevil's odd headclipping behavior reduces larval exposure to plant defense chemicals and also prevents other insects from competing for the head prize. 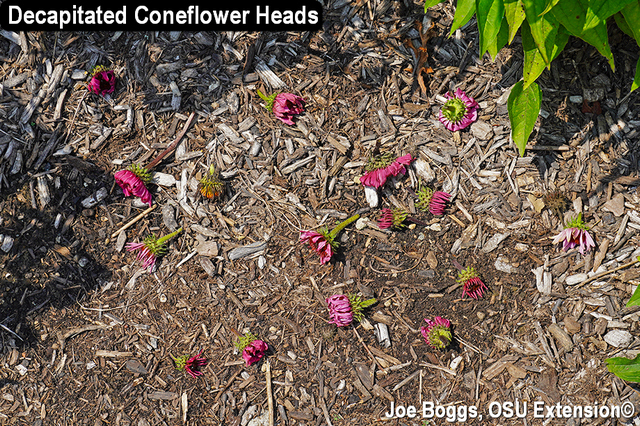 Mature weevil larvae leave the flower heads and crawl into the soil to spend the winter.  Pupation occurs the following spring to early summer and adults appear sometime in late June to early July.  There is one generation per year.

The decapitating damage by this weevil is mainly aesthetic, but the reduction in seed production could potentially cause a significant decline in natural re-seeding.  The best method for controlling this weevil is to remove and destroy the dangling flower heads as well as heads that have dropped to the ground.  This will prevent weevil larvae from completing their development thus reducing the weevil population for next season.

Insecticides are not a viable suppression option.  Insecticide labels will not support making an application to plants in full flower because of the substantial risk of killing plant pollinators.  Remember:  the label is the law!