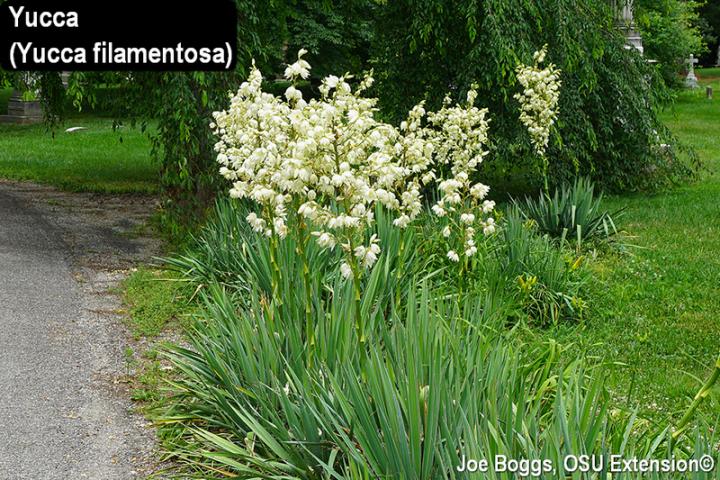 I've long admired yucca (Yucca spp., family Asparagaceae) but realize many do not share my enthusiasm for these agave cousins.  Indeed, searching the web using "yucca" as the keyword yields almost as many websites offering advice on how to kill it as how to grow it.  Perhaps the developing interest in landscape plants that require little watering will influence the point of view.

My yuccaffection stems from growing up in Appalachia where the two most common flowering plants in farmhouse landscapes seemed to be peonies and yuccas.  In my neck of the woods, the yuccas were called "ghost lilies."  To understand this regional common name, you need to view blooming yuccas in the nighttime darkness found away from urban centers.  The lower flower stalks blend into the night making the vivid white flowers appear as luminescent spectral apparitions floating just above the ground.  They’re a great backdrop for telling late-night ghost stories on a farmhouse porch. 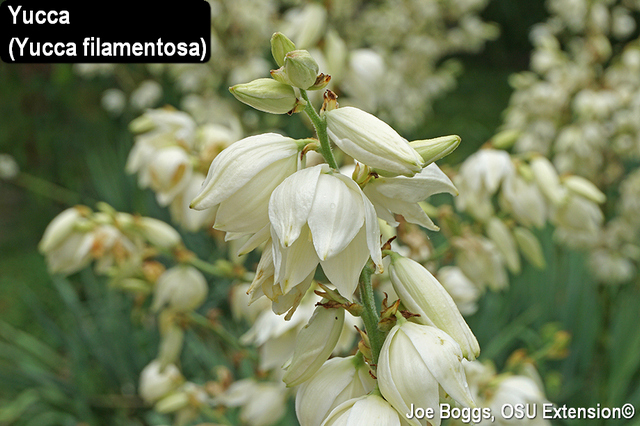 Of course, every plant comes with a complement of potential pests and yucca is no exception.  There are general plant pests that feed on other plants but may also target yuccas such as scales, mealybugs, and spider mites including the dreaded two-spotted mites (Tetranychus urticae).  There are some specific pests like the agave weevil (Scyphophorus acupunctatus) although I don’t believe it’s ever been found in Ohio. 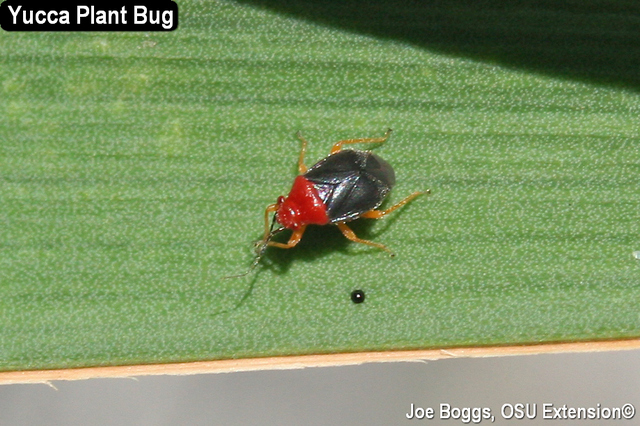 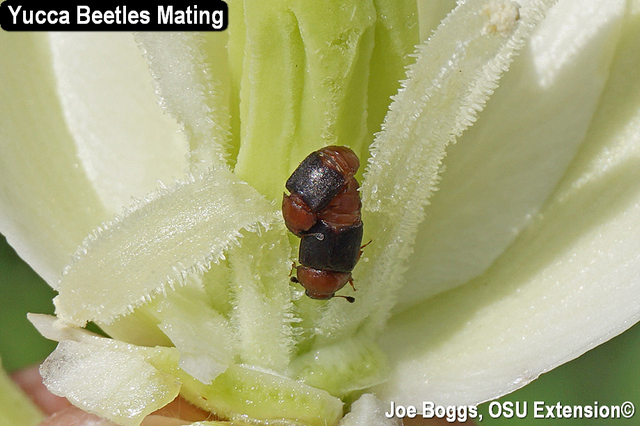 Yucca beetles are a type of “sap beetle” that confines its feeding to the buds and flowers of its namesake host.  The adults create deep pits in the buds and holes in the flower petals. 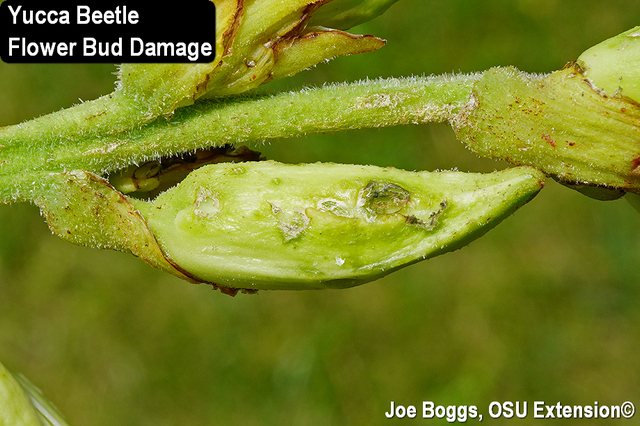 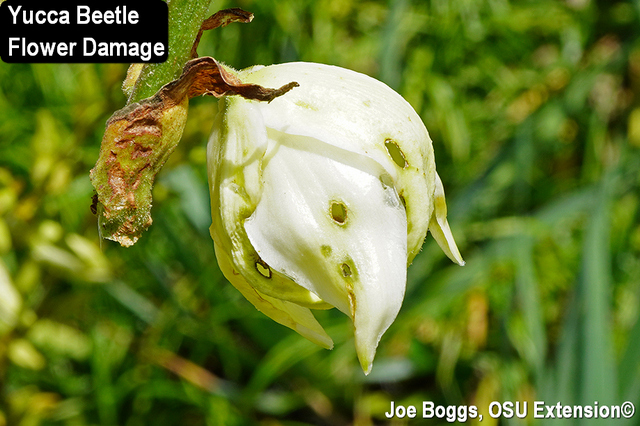 In an insect version of a dinner date, females are commonly observed feeding on flower buds while mating.  Mated females lay eggs on the flower buds and their resulting grub-like larvae mine the base of the floral calyx and corolla.  The combined adult and larval feeding damage cause flower buds and flowers to drop from plants and heavily damaged flowers to fail to produce seeds.  There is one generation per season with the adults that will arise later this season spending the winter as pupae in the soil. 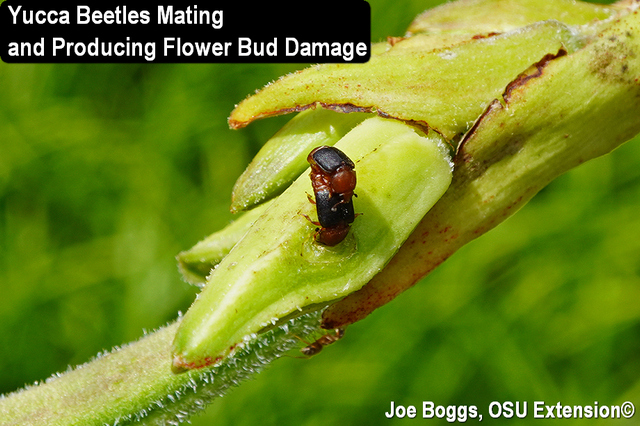 Little research has been done on yucca beetles.  However, a study published in 1997 (see "Reference" below) used Spring Grove Cemetery and Arboretum and the Cincinnati Zoo and Botanical Garden as research sites for investigating the relationship between the flower-infesting yucca beetles and the specialized obligate mutualistic pollination system involving the yucca moth Tegeticula yuccasella (family Prodoxidae).

The researchers reported that the beetles “were estimated to be responsible for 37% of all floral abscission” observed in the study.  This was a collective percentage based on examining 3810 flowers.  However, the researchers didn’t report the percent damage on a per plant basis.  Based on my observations, beetle damage can vary widely from one yucca patch to the next and even between plants within a yucca patch.  I’ve observed enough damage to some patches to put the kibosh on yucca serving in a support role for late-night ghost stories.

Control options are limited because topical sprays and systemic applications may affect the yucca moth.  However, the beetles are easy to spot, so physical removal would be an effective alternative management tactic.

On a side note, while taking pictures for this Alert, I commonly found what appeared to be so-called black field ants (Formica glacialis) showing great interest in the yucca beetles.  I’m not sure what they were doing, but they appeared to be feeding on something associated with the beetles.  There are research reports describing sap beetles “stealing” aphid-produced honeydew carried by ants in a special stomach called a crop.  However, I could find no references describing a reverse relationship.  If Alert readers can shed light on my observation, please contact me by clicking on my name with this posting to get my e-mail address. 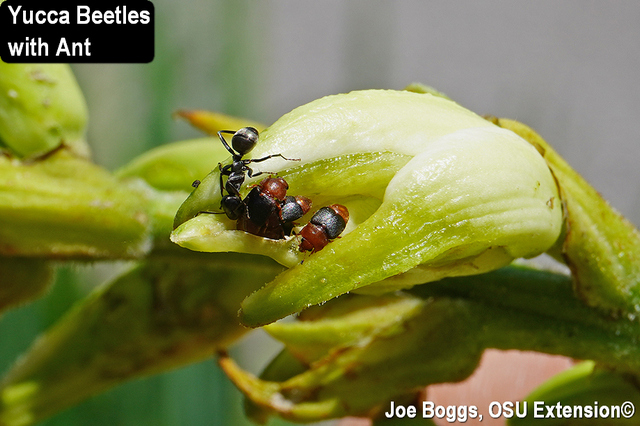 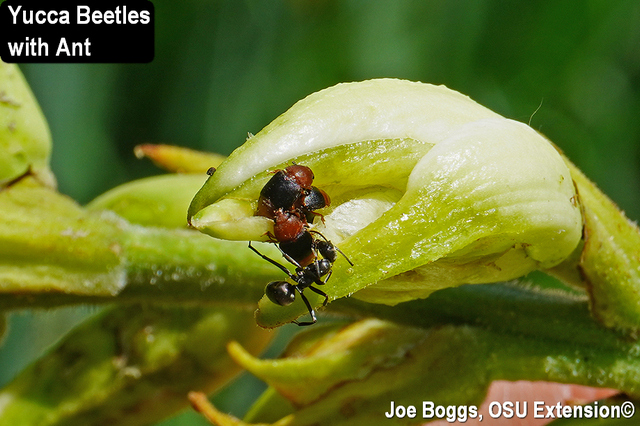 Yucca plant bugs are the more significant of the two pests.  The bugs can cause serious harm to their namesake host by using their piercing-sucking mouthparts to extract the essence of yucca.  Indeed, I watched a historic planting of Yucca filamentosa 'Adam's Needle' that was established in the late 1800s in Spring Grove become significantly depleted due to plant bug damage.  And yucca plant bugs may feed on several species of yucca beyond Y. filamentosa. 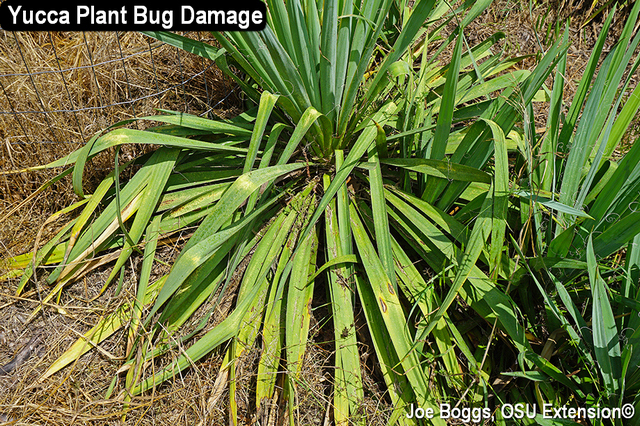 Both adult and immature (nymphs) yucca plant bugs have a somewhat oval-shaped body.  Adults of this small (3/16" long) native of the southwestern U.S. have black wings and orangish-red legs, head, thorax, and abdomen.  The nymphs share this striking color scheme, but they appear more reddish since their black wing pads fail to cover their entire abdomen. 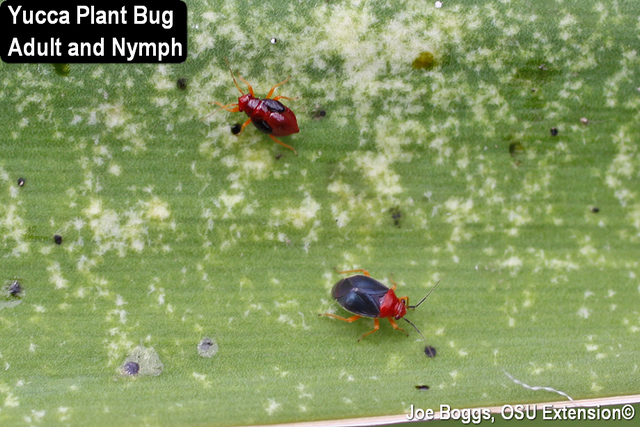 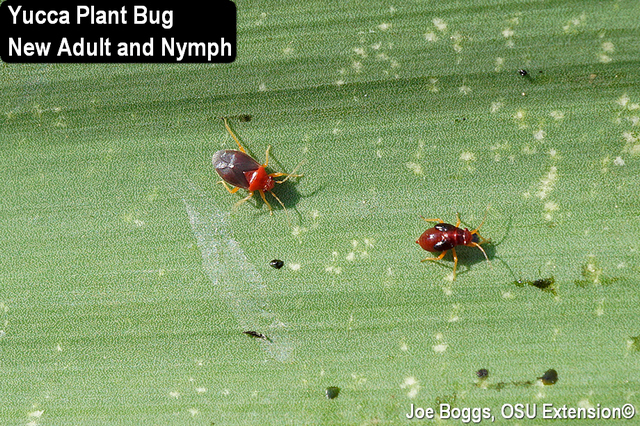 Feeding damage by the adults and nymphs produces small, yellowish-white spots (stippling) which may coalesce causing the foliage to turn yellow then brown.  The bugs further reduce the aesthetic value of yucca blades by depositing spent yucca extract in the form of black, tarry waste spots. 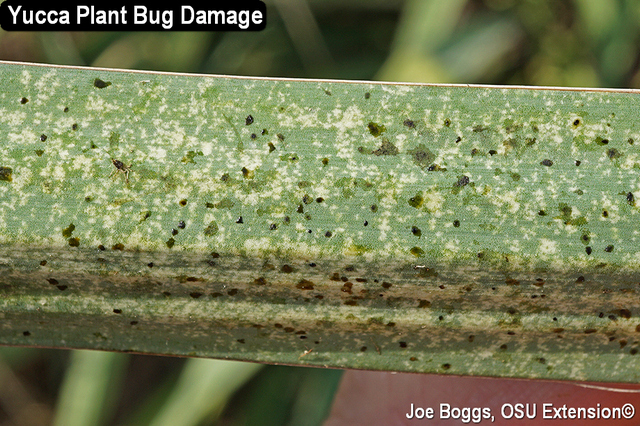 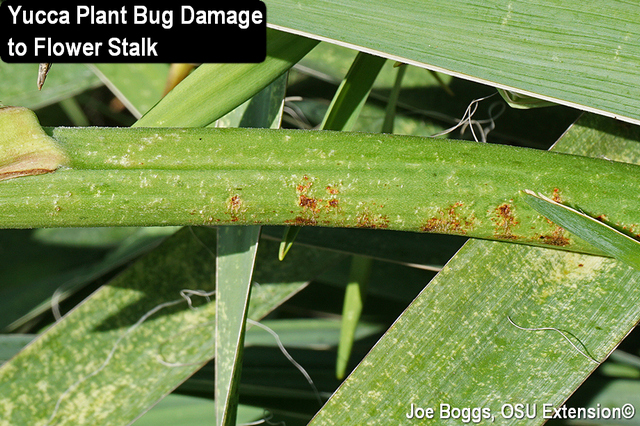 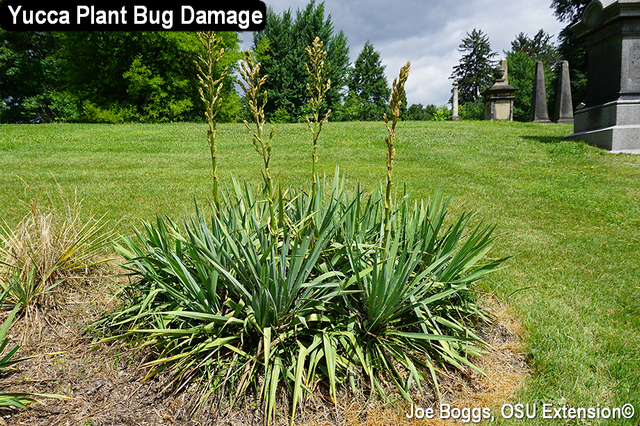 Despite this bug being seen as a common problem on yucca; particularly in the southern U.S., I could find no published insecticide efficacy trials.  However, based on personal observations, using direct contact insecticides such as insecticidal soap is problematic.  These bugs are very visual; they see you (or a spray nozzle!) coming and quickly drop from the yucca blades.  Residual insecticides such as pyrethroids appear to provide limited efficacy because they work best if consumed by insects with chewing mouthparts.

The systemic neonicotinoid insecticides imidacloprid (e.g. Merit, Xytect) and dinotefuran (e.g. Safari, Transect) were equally effective in suppressing the yucca plant bugs in Spring Grove.  The impact on pollinators is minimal because yucca flowers are not visited by general pollinators.  Of course, any pollinator concerns can be addressed by delaying applications until after flowering.  This would also preserve the mutualistic yucca moths.