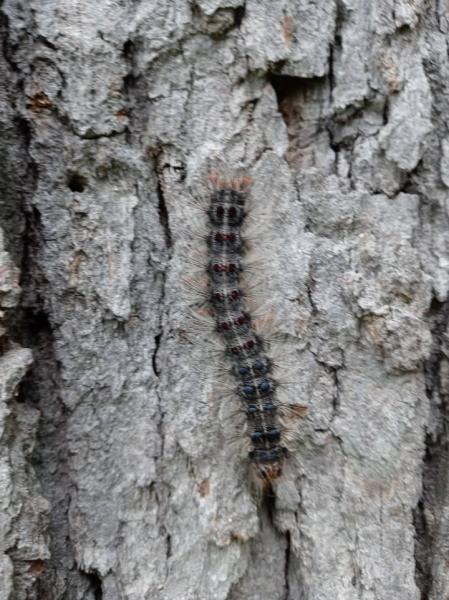 Caterpillars are gaining in size, their appetite is increasing, and their frass is falling. Last evening, I went to check out a site in Lucas County, in Toledo's Ottawa Park. The park includes many oaks, in the turf areas, and in the wooded area between the open areas and the adjoining golf course. There is plenty of food for these hungry caterpillars to consume.

As I neared the oaks, not too far from the parking lot, the 'sound' of a light rain became evident. But, it wasn't really rain, it just sounded like it. What I was actually hearing, and even feeling (yes - gross), was the frass falling from the caterpillars that were feeding on the oak leaves above. If you aren't familar with the term frass, it is the excrement of an insect. Yes - in this case - caterpillar poop! I looked down and the sidewalk was peppered with frass. It wasn't as obvious in the turfgrass, as it filtered through the blades of grass to the soil level and was a bit hidden.

The caterpillar photographed below was killed by the fungus, Entomophaga maimaiga. This fungus is native to Japan, and was introduced to the United States. I do remember back when gypsy moth became problematic in Lucas in the mid-90s, several people drove north to collected caterpillars killed by the fungus and introduced them, with approval, in NW Ohio as a means to spread the fungus and help with the management of the population.

You will notice the caterpillar is hanging straight down with its head capsule at the bottom. At first, the caterpillar is very soft after the infection, and if you happen to touch it, the insides ooze out. The color is like a dark ink and the smell is horrible. Then, the caterpillar becomes shrunken and hard and has been described as a hairy toothpick. At this stage you can often see white spores, or conidia, on the outside of the caterpillar. This fungus spends much of its time in soil, just waiting for gypsy moth populations to resurge.

The photo below is illustrating a caterpillar that has been infected and killed by the nucleopolyhedrosis virus (NPV). Gypsy moth populations in North America have always been affected by NPV, rather than it being introduced like the fungus. It is more commonly seen when populations are at a high level or an outbreak situation. You will see that the caterpillar is folded over and resembles an upside down 'V'. This is a great way to remember that the caterpillar was killed by the virus because of the 'V'.

If you would like to learn more about each of these biological controls, check a resource from Michigan State University. It covers both the virus and fungus and is a source of additional information: https://www.canr.msu.edu/ipm/Invasive_species/Gypsy-Moth/virus-and-fungus-disease-cause

If you are seeing populations of gypsy moth, keep the updates coming. This information, along with male moth captures in traps set out by ODA will help monitor for hot spots, especially along the leading edge, and in the suppression zone. ODA does coordinate aerial gypsy moth treatments each spring. Treatments made as part of the suppression program are voluntary and require a cost share, and applications are due by September 1, 2021, for the 2022 treatment project.