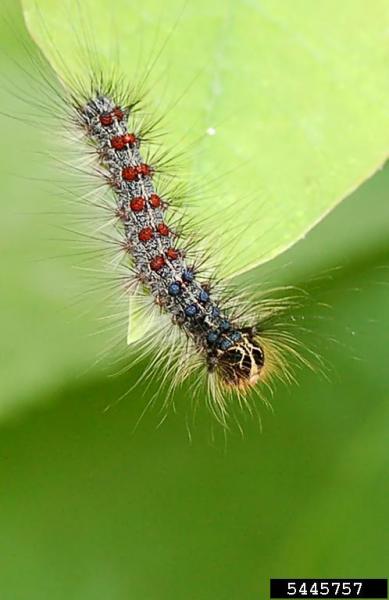 Gypsy moth (Lymantria dispar) caterpillars are becoming evident in areas where populations are present. Citizens are reaching out to local Extension offices to identify the caterpillar and determine what is the best course of action.

The caterpillars are voracious feeders and as their numbers build, their appetites expand and plant foliage disappears rather quickly. While they prefer oaks, their host preferences are quite expansive. They seem to enjoy the needles of spruce, especially as larger, or later instar caterpillars.

Wisconsin has a "favored food chart" that includes a chart that breaksdown their favorite foods, acceptable meals, and those rarely touched. You can check out that resource at: https://fyi.extension.wisc.edu/gypsymothinwisconsin/pest-management-2/favored-trees-and-shrubs/

As caterpillars increase in size, they can become a little more difficult to manage. While Btk (Bacillus thuringiensis kurstaki) is very effective on small caterpillars, it will not do the job on these larger caterpillars, or feeding machines. This bacterial insecticide kills caterpillars through ingesting the product while feeding on the foliage where the application was made. Bt causes the cells of the caterpillar’s stomach lining to rupture. Bt is found naturally in soil and degrades pretty quickly when exposed to sunlight. The variety of Bt used against the gypsy moth only affects caterpillars of moths and butterflies that feed on treated leaves during the same time-frame or window when gypsy moth is feeding. Bt has no affect on animals, birds, people, or even other insects. It is sold under various labels including Dipel, Foray, and Thuricide. Bt must be applied to trees earlier in the spring when caterpillars are less than 1/2-inch long, usually at 1st, 2nd or 3rd instar. Timing is critical as Bt is significantly less effective on older caterpillars, those that we are seeing now.

There are numerous insecticides that are registered as being effective against gypsy moth. Check the label to make sure gypsy moths are listed. Products like acephate, bifenthrin, and carbaryl are the most common active ingredients and are available in several formulations. Consider the potential impact on beneficial insects and natural enemies such as predators, parasites, and honeybees and always read and follow the label directions.

It is important to note that healthy decious trees and shrubs leading up to a gypsy moth outbreak can handle a defoliation as a result of the caterpillar feeding by sending out an additional set of leaves later this season as the feeding subsides when the caterpillars pupate and ultimately become adult moths. It is only after repeat defoliation that these plants typically show signs of decline or even death in some situations. Trees that are under stress before gypsy moths arrive, don't tend to recover as well. It is important to note, evergreens that are defoliated can die in a single season.

In Ohio, the Ohio Department of Agriculture (ODA) coordinates gypsy moth management on a large scale as part of the national efforts, including work in the three management zones: suppression, slow-the-spread, and eradication. You can learn more about each area, and the quarantine in place in Ohio at their website: https://agri.ohio.gov/wps/portal/gov/oda/divisions/plant-health/gypsy-moth-program

Some of their efforts includes a treatment of SPLAT as part of the mating disruption component of the project. Those efforts are underway in anticipation of adult emergence in the near future. Additionally, ODA uses traps with lures to capture male moths and monitor populations across the Ohio. The other part of their program includes aerial applications of insecticides targeted at young caterpillars early in the spring. There are certain requirements for areas to qualify including minimum size of treatment blocks, an average number of egg masses per acre (250 egg masses in residential areas or 1000 egg masses in a woods or forest), a percentage of tree cover, and a local cost share for the application.  A deadline of September 1, 2021 must be met for consideration for the 2022 project.  Additional details are available on their website.

If you are seeing gypsy moths we want to hear from you. It is important to track the population and watch for the outbreaks that occur. If you have a gypsy moth report, please send an email to Amy Stone at stone.91@osu.edu