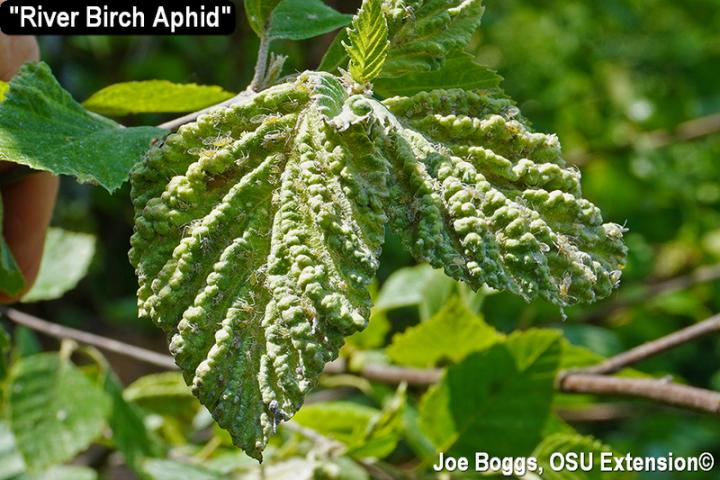 River birch (Betula nigra) may be showing the unusual leaf distortion symptoms caused by the native aphid, Hamamelistes spinosus.  The aphid has no approved common name but is generally referred to as the spiny witch-hazel gall aphid or river birch aphid depending on the host.

This aphid has been flying below the radar for several years.  However, reports of its damage to river birch are common this spring in southwest Ohio.  It’s not usual for populations of native insects, particularly aphids, to rise and fall dramatically from year to year with wide swings in population densities driven by the “3-Ps”:  predators, parasitoids, and pathogens. 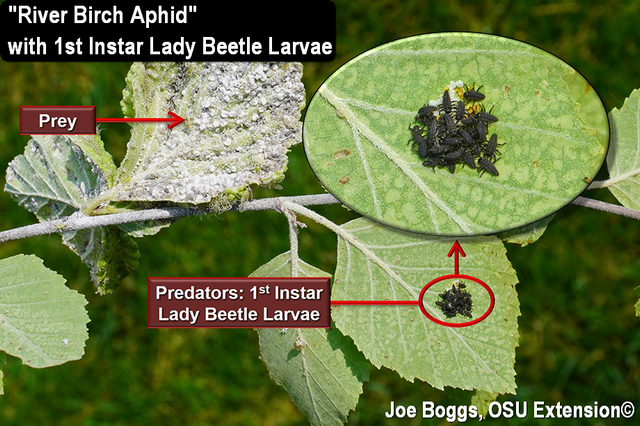 River birch aphids produce three symptoms on their namesake host.  The most obvious are raised ribs or "corrugations" on the upper leaf surface that matches deep furrows between the veins on the lower leaf surface where the aphids live.  Occasionally, leaves become distorted curling over the aphid’s hideout.  The affected leaves will eventually turn yellow and may prematurely fall off of the tree. 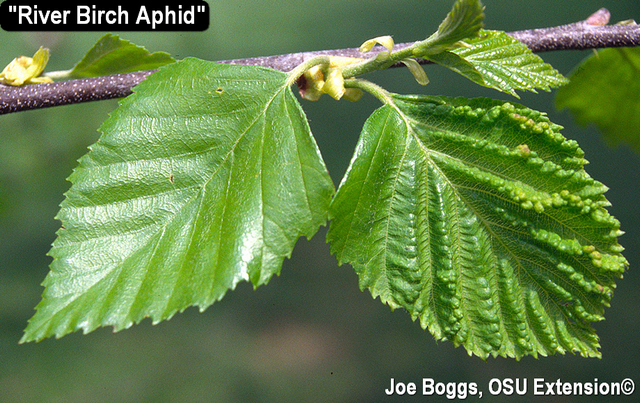 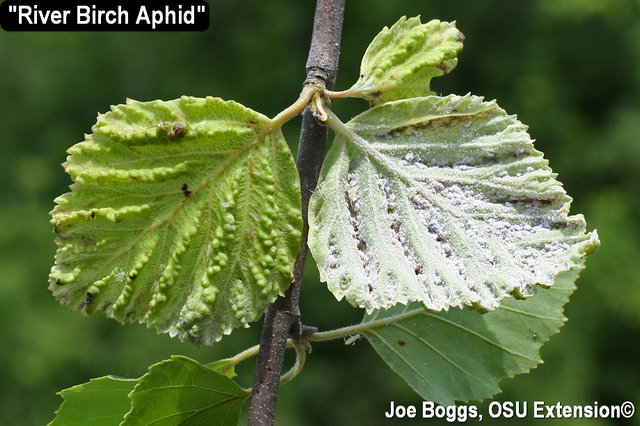 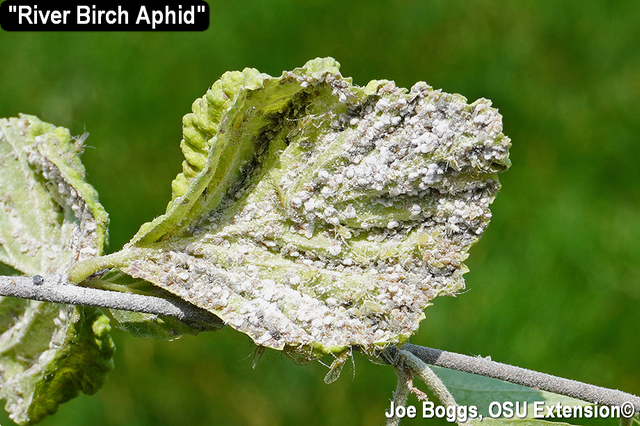 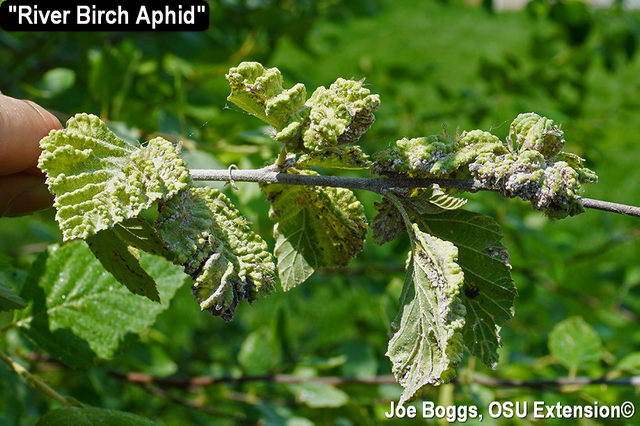 River birch aphids are prolific honeydew producers and the clear, sticky droplets rain down upon lower leaves, understory plants, slow-moving gardeners, etc.  The aphids cover themselves in a waxy, white, flocculent material that sloughs off to becomes stuck in the honeydew making leaves look like they’ve been splattered with white paint.  Of course, the honeydew may eventually become colonized with black sooty molds to present a nice contrast. 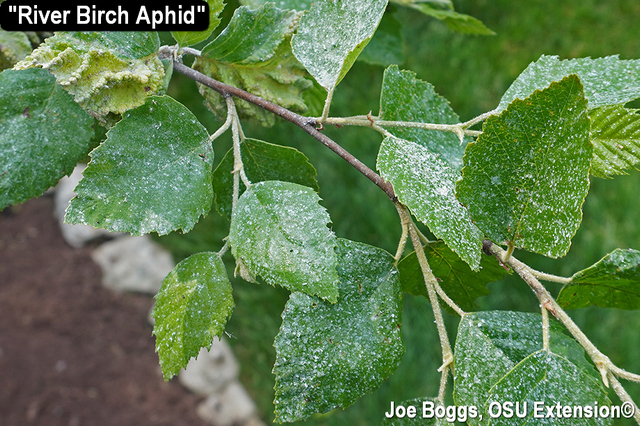 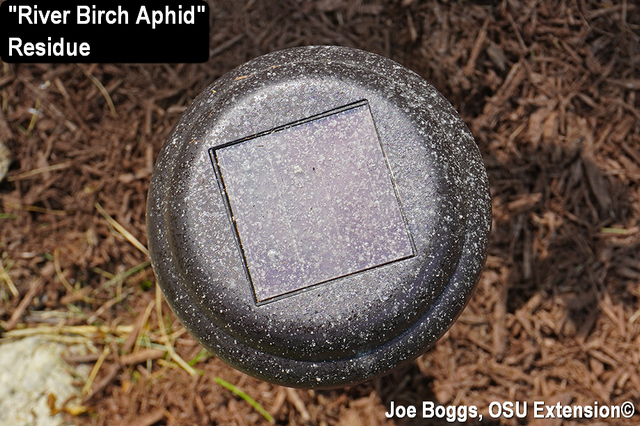 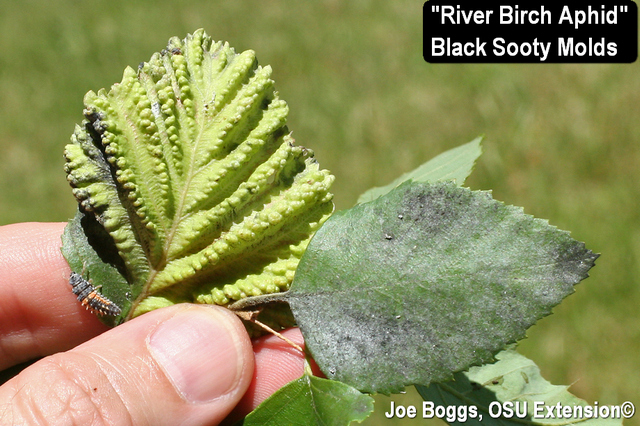 Although symptoms may be obvious, river birch aphids seldom produce enough damage to seriously affect the overall health of their host tree.  Based on personal observations, it’s rare for more than 20% of the leaves to be infested which is far a threshold to cause harm to the tree.

It’s common for the 3-Ps to eventually decimate aphid populations meaning insecticide applications are not required.  Indeed, applications of insecticides that kill both the beneficials as well as the aphids could allow the aphids to rebound next year.  If insecticides are required such as in nursery production, it’s best to select products that have a limited impact on natural enemies such as systemics. 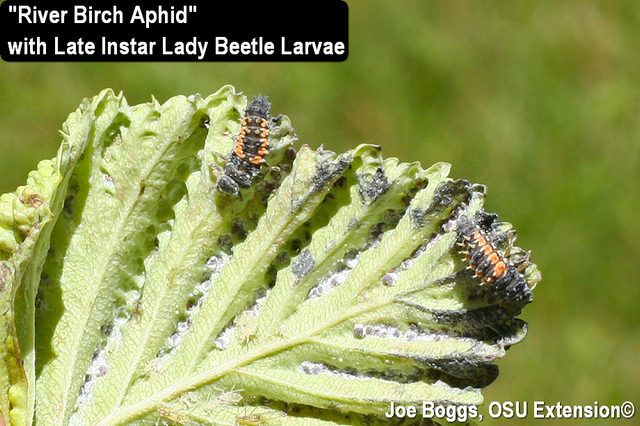 Researchers conducting host preference studies have noted that the aphids may occasionally appear on paper birch (B. papyrifera), European white birch (B. pendula), and Asian white birch (B. platyphylla szechuanica).  However, none of these hosts develop populations as high as those found on river birch, particularly ‘Heritage’.

The spiny witch-hazel gall aphid is so named because it hijacks expanding witch-hazel (Hamamelis spp.) flower buds to produce hollow, spiny, globular galls.  The galls provide a home and food for the aphid’s progeny.  The galls have no impact on the overall health of their witch-hazel host because they only affect flower buds rather than stem or leaf buds.  Presumably, aphids that arise from the galls fly to a river birch to become river birch aphids. 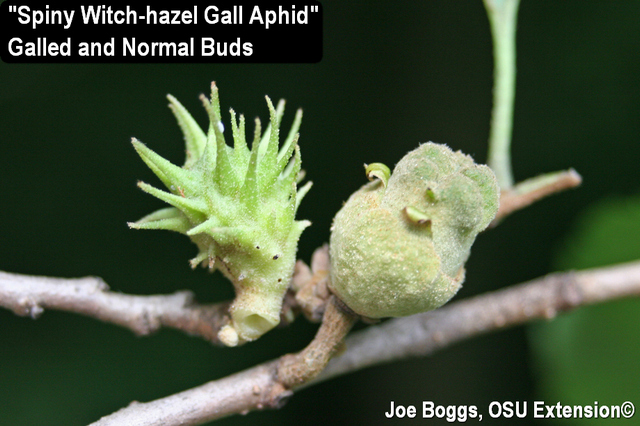 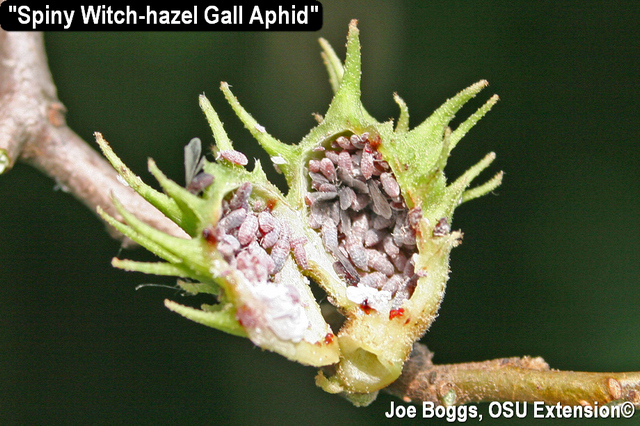 I’m beginning to question whether the aphid must move back and forth between witch-hazel and river birch to complete its life cycle.  I can present no scientific evidence in support of my skepticism; only anecdotal evidence.  However, I believe it deserves a second look by researchers.

I’m not questioning whether the aphids found on birch and those on witch-hazel are the same species.  Henry Shimer described and named the aphid in 1867 based on specimens collected from river birch and American witch-hazel (H. virginiana).  Of course, it would be interesting to apply genome sequencing to the question.

The alternating two-host life cycle for H. spinosus was described by Theodore Pergande in 1901.  He did not specify the exact species for either host only referring to the hosts as “birch” and “witch-hazel.”  Pergande is cited 24 times in scientific papers and publications in support of the two-host alternating life cycle.  I can find no published research conducted since that time to confirm the need for H. spinosus to move back and forth between two hosts to complete its life cycle.

Here are the reasons for my skepticism:

1. Host Proximity.  Based on personal observations and communications with horticulture professionals, spiny galls on witch-hazel are rare, at least here in Ohio.  Despite years of spending hours perusing witch-hazels in Ohio looking for the spiny galls, I’ve only been able to photograph them once.  The galls appearing in this Alert were photographed in 2005.

Although witch-hazels are becoming more common in parks, arboreta, and home landscapes, they remain much less common compared to river birch.  How far will the aphids fly in search of their required alternating hosts?

2. Host Range.  Shimer collected aphids from American witch-hazel to describe the aphid species meaning that it must be able to produce galls on H. virginiana.  Pergande did not specify the witch-hazel species he observed for describing the alternating two-host life cycle.  However, it’s likely he made his observations on H. virginiana.

However, much has changed since 1901.  There are now multiple witch-hazel species available to landscapers and home gardeners as well as a plethora of varieties, cultivars, and hybrids.  Is H. spinosus able to produce galls on all of these witch-hazels from which to launch aphids towards river birches?  Or, is their galling activity confined to American witch-hazel?  If so, host proximity would become even more important.

The bottom line is that there just seems to be too many challenges stacked against the river birch aphid / spiny witch-hazel gall aphid requiring two hosts to complete its life cycle.  It would not be the first time an insect that was thought to have an alternating two-host life cycle was found to have two alternate hosts.  It was once believed that Cooley spruce gall adelgid (Adelges cooleyi) required both Colorado blue spruce (Picea pungens) and Douglas-fir (Pseudotsuga menziesii) to complete its life cycle until it was found the adelgid could successfully propagate on either host.