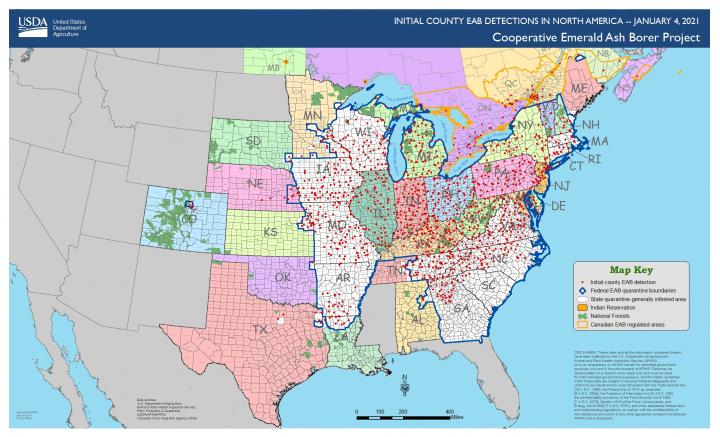 Kicking off the new year with an update on a not so new invasive species, the emerald ash borer (Agrilus planipennis) (EAB).

EAB was first detected in summer of 2002 in Michigan, near Detroit, and in winter of 2003 in Ohio, outside of Toledo. It has since spread through the buckeye state and has made its home in 36 states. As indicated on the map, some states have felt the wrath of EAB from north to south and east to west, while some have what we would call 'isolated infestations' - at least for now.

While the EAB map that is updated on a monthly basis and distributed by USDA-APHIS had no changes or additions since December 1, 2020, the big news is that on December 15, 2020 USDA-APHIS published in the Federal Register a final rule that removes the federal domestic EAB quarantine regulations. The rule changing the approach to fight EAB will become effective on January 14, 2021.

Here is the release distributed by USDA-APHIS last month.

WASHINGTON, December 14, 2020 —The U.S. Department of Agriculture’s Animal and Plant Health Inspection Service (APHIS) is changing its approach to fight the emerald ash borer (EAB) infestation that has spread through much of the United States. The Agency is publishing a final rule that removes the federal domestic EAB quarantine regulations that have proved ineffective and will redirect resources to more promising methods.

APHIS has been transparent about the challenges associated with controlling the emerald ash borer and that the domestic quarantine has not proven effective in stopping its spread. The Agency has worked to identify more effective and less intrusive methods and will now direct available resources toward non-regulatory options for management and containment of the pest, such as rearing and releasing biological control agents. Results have already proved effective and the actions announced today will allow the Agency to increase their use.

The final rule and the response to the comments we received will publish in the Federal Register on December 15, 2020 and be rule will be effective on January 14, 2021. Documents may be viewed online at https://www.regulations.gov/docket?D=APHIS-2017-0056 upon publication.

APHIS is working with the National Plant Board on effective strategies to manage firewood movement, which is one of the ways the emerald ash borer spreads.

APHIS’ goal is still to maintain ash in the North American landscape. We look forward to continued collaboration with our partners on this effort.

While the changes will have minimal to no implications for Ohioans as it relates the quarantine regulations, it is important to sometimes step-back and look at the big, or national picture.  For many, EAB has come and gone. Others continue to manage landscape ash trees with insecticide options, or manage ash trees in a woodlot that germinated from the seed bank or sprouted from roots of ash trees that once stood and were food for the distructive metallic green borer in the past.

If continuing to stay up-to-date on EAB  interests to you, check out the regional website maintained by Michigan State University at http://www.emeraldashborer.info/  In addition to updates, blog posts and educational resources, the site is also home to Emerald Ash Borer University which offers virtual educational programmng and recordings on EAB and other invasive species. A new 'semester' of sessions will be offered this winter and will soon be annouced and promoted via the EAB website and an upcoming  BYGL Alert.