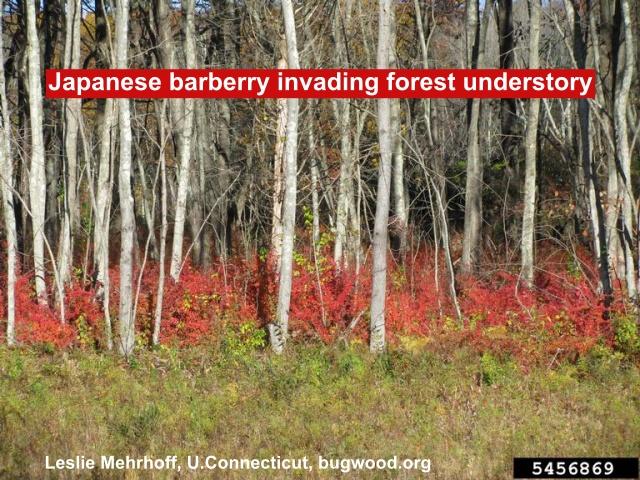 Common barberry or European barberry, Berberis vulgaris, is a non-native invasive woody shrub.  Intentionally brought to North America by early settlers in the 1600s, it has escaped cultivation and is widely distributed in the northern U.S.  Common barberry is also an alternative host for the disease, black stem rust, a severe pest of grains.  As a result, large scale eradication efforts began in the 1900's to remove this reservoir of disease.  However, populations still exist in the Great Lakes states, including Ohio, and the northeastern United States (distribution map here).

Japanese Barberry, Berberis thunbergii, is a popular, non-native ornamental shrub that became a replacement for common barberry that would not transmit black stem rust.  However, it is now widely classified as an invasive species in many states.  Grown for its color and deer-resistance (due to thorns), it has escaped cultivation and is now found invading forests and disturbed areas.  Some states have it listed among their invasive species and noxious weeds, as well as banning certain cultivars. 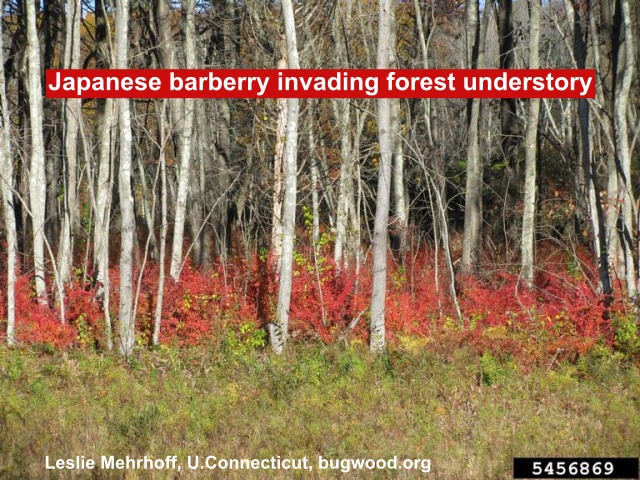 These two barberry species are often confused.  One key identifier is the difference in the leaf margin.  Common barberry, aka European barberry (B.vulgaris) has sharply toothed leaf edges (left photo), while the Japanese barberry (B.thunbergii) are smooth (right). 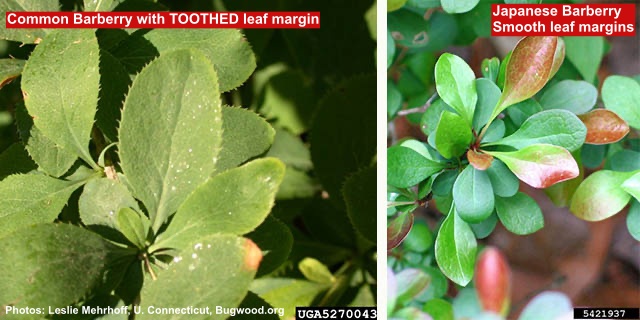 Additionally, common barberry spines are often doubly or triply branched (left), and Japanese barberry spines arise singly (right).  These thorns are very fine, some as sharp as a hypodermic needle.  They have a high silica content which makes them brittle and easily dislodged into skin and apparel. 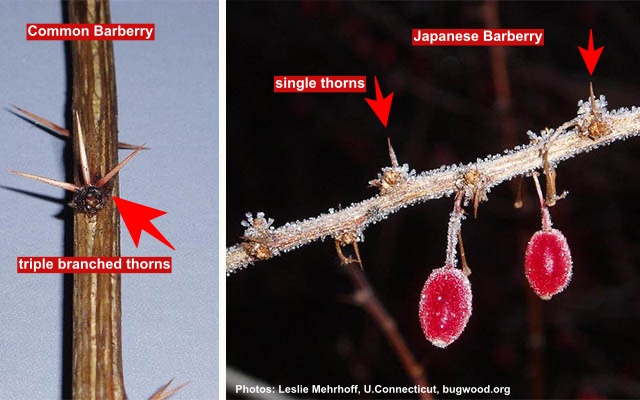 Both are flowering woody, deciduous shrubs.  Common Barberry has yellow flowers that droop from branches (think like the bleeding heart plant) and can be approximately ½ inch long.  Japanese barberry flowers can vary with cultivar from yellow to white/creamy colors. 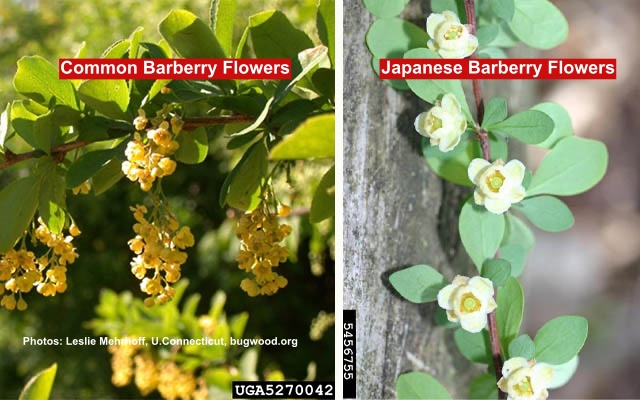 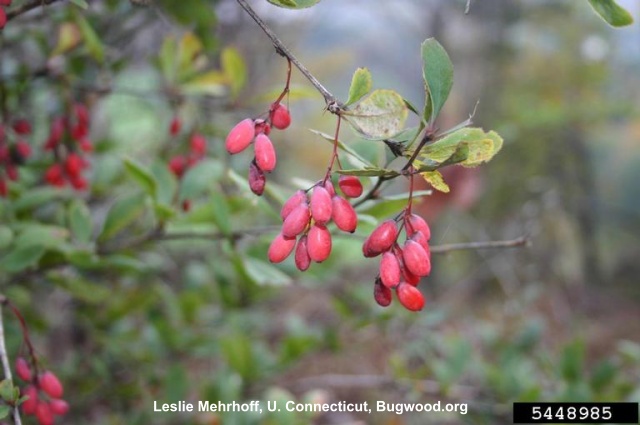 These berries are very appealing to birds, who eat and disperse the fruit and seeds. These shrubs also spread by rhizome, sending up shoots from the roots and root particles remnants in the soil.  This can establish thick, hard-to-manage stands of thorny shrubbery that crowd out native plants.

Research is investigating the relation between deer tick populations and the presence of Japanese barberry.  Research lead by and conducted at the Connecticut Agricultural Experiment Station, an independent state agency, with participation from the University of Connecticut (correction Dec.16, 2020) found higher populations of deer ticks in areas where Japanese barberry was present.  It is hypothesized that the dense growth of barberry may create a microhabitat beneficial to tick survival (SOURCE).  A multi-year study (Williams et al., 2017) further showed that managing Japanese Barberry can lead to a reduction in deer ticks (SOURCE).  This work has resulted in an excellent guide on managing Japanese Barberry in forests for foresters and woodland managers by OSU alumnus Jeffrey Ward, and Scott Williams of the Connecticut Agricultural Experiment Station and Thomas Worthley of the University of Connecticut (Ward et al., 2013).

Barberry is very difficult to control.  Early invasions can be managed by digging and cutting stems and roots before fruiting, taking care not to leave any root from which a new plant could grow.  Even after removal, diligent monitoring is needed to catch any remaining seed germination or shoots from regrowing.  As before mentioned, barberry has many thorns.  Proper protection is highly recommended to prevent injury.

Herbicide treatment is also an option.  Repeated applications will be necessary to manage and control stands.  Follow up and monitoring will be required, reaffirming how important early eradication and treatment are.  Foliar application is effective using a brush management herbicide such as glyphosate + triclopyr mixtures.  These are non-selective herbicides that can impact surrounding plants.  Basal bark and cut-stump methods are also an option, using an oil additive to help with absorption in the woody stems.  More details on control management can be found in this factsheet as well as the guide mentioned above.