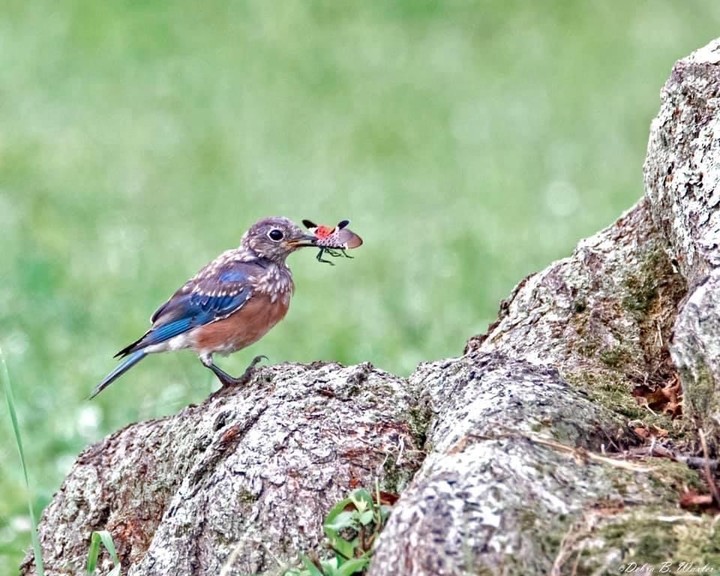 As we all learn more about the spotted lanternfly, an invasive insect detected in North America in 2014 in eastern Pennsylvania, there are a lot of research being conducted to gain that knowledge. Today's BYGL Alert is a shared article from Penn State University via Penn State News on October, 7, 2020 on one such project that will be encouraging citizen scientists to participate and contribute their observations in the field. The media contact is Amy Duke from Penn State.

UNIVERSITY PARK, Pa. — Do birds find the spotted lanternfly to be a tasty treat or a nauseating nibble? That is one of the questions researchers at Penn State hope to answer, and they are seeking citizen scientists, especially bird watchers, to help in their quest for knowledge.

“Because the spotted lanternfly is a non-native insect, it doesn’t have natural enemies in the U.S. to keep its numbers in balance,” said Kelli Hoover, professor of entomology in Penn State's College of Agricultural Sciences. “Finding predators that live in our environment would be a great biological control option and useful in guiding management practices.”

Hoover and Anne Johnson, a doctoral candidate in entomology, are spearheading a study to examine the potential for native birds and insects to feed on the spotted lanternfly, which is an invasive insect from Asia that first was found in North America in Berks County, Pennsylvania, in 2014. The pest since has spread to at least 26 Pennsylvania counties and to surrounding states.

At risk are agricultural commodities — including grapes, tree fruit, nursery plants and hardwood trees — as well as natural habitats, parks and backyards. Economists warn that this insect, if not contained, could drain Pennsylvania’s economy of at least $324 million annually and cause the loss of about 2,800 jobs.

Hoover and Johnson explained that in its native environment, the spotted lanternfly is kept in check by several predators, including a parasitic wasp. However, importing new species to the U.S. as a control measure requires numerous studies on environmental impact and regulatory approval — a process that can take years.

“Unfortunately, we don’t have years,” Johnson said. “But if we can find native species that will prey on spotted lanternfly and ways to encourage this behavior, then we can use these species in control programs more effectively. To help with this, more information about the types of birds and their feeding behaviors, such as eating mainly nymphs or avoiding eating the wings on adults, is crucial to know.”

They also want to know if the pest’s preferred diet — Ailanthus altissima, known as tree of heaven — influences how it might taste to birds. They theorize that the chemicals in tree of heaven might cause the insect to have a “bitter” flavor, especially in later life stages when the pest is eating profusely.

“Insects have developed ways of protecting themselves, and one involves colorful markings,” Hoover said. “Colors are a warning sign that signals to predators, ‘Stay away, I taste bad.’ This could be the case with the spotted lanternfly, which displays red and black markings as the insect matures.”

The team, which includes Margaret Brittingham, professor of wildlife resources, and Allison Cornell, assistant professor of biology at Penn State Altoona, will study spotted lanternfly specimens that have been raised in a quarantined laboratory with tree of heaven as their food source. Researchers will analyze the insects for chemical compounds present during each life stage, while examining tree of heaven sap as the potential source of these chemicals.

This information will be integrated with the outcomes of a field study planned for later this fall, which involves the placement of bird feeders at The Arboretum at Penn State and Millbrook Marsh Nature Center in Centre County, and at Shaver’s Creek Environmental Center in Huntingdon County.

Suet containing ground spotted lanternfly adults that have fed on tree of heaven or grapevines will be placed side-by-side in suet feeders attached to trees. Video cameras will record birds that visit the feeders and the suet cake they prefer.

In addition to the controlled studies, the researchers are enlisting the help of citizen scientists, preferably bird watchers, in the spotted lanternfly quarantine zone. Bird watchers — or “birders” — traditionally have been involved in citizen science, including the National Audubon Society’s Christmas Bird Count, the nation’s longest-running community science bird survey, explained Brittingham, an extension wildlife specialist.

“Once again, birders are being called on to contribute data that can help answer important research questions,” she said. “The most pressing of these questions is — are birds eating spotted lanternfly, and if they are, what role can they play in reducing small infestations before they become outbreaks?”

The citizen scientists will post reports, videos and photos of birds they see feeding on spotted lanternflies, where and when they saw them, and whether tree of heaven is located nearby. They also are encouraged to provide information about the birds’ behavior, such as swiping their beaks or shaking their heads after eating a spotted lanternfly.

“Birds are essential in helping to keep plant-eating insect populations under control,” Brittingham said. “We are eager to learn more about their potential in helping with the spotted lanternfly problem.”

More information about becoming a citizen scientist can be obtained by emailing birdsbitingbadbugs@gmail.com. A Facebook page, "Birds Biting Bad Bugs," also has been created.

A second phase of the research will investigate the potential for native insects to suppress spotted lanternfly populations. Hoover said there have been many reports of insects, including praying mantises and assassin bugs, feeding on spotted lanternflies.

A McIntire-Stennis grant from the U.S. Department of Agriculture is supporting this study.

To learn more about the spotted lanternfly, the state-imposed quarantine, management techniques and how to report a sighting, visit the Penn State Extension website at https://extension.psu.edu/spotted-lanternfly.

The Penn State website mentioned above and at the end of the news article is an excellent source of information about the SLF. If you live in Ohio and suspect that have seen the SLF, we urge you to report that suspect sighting in one of the following ways: