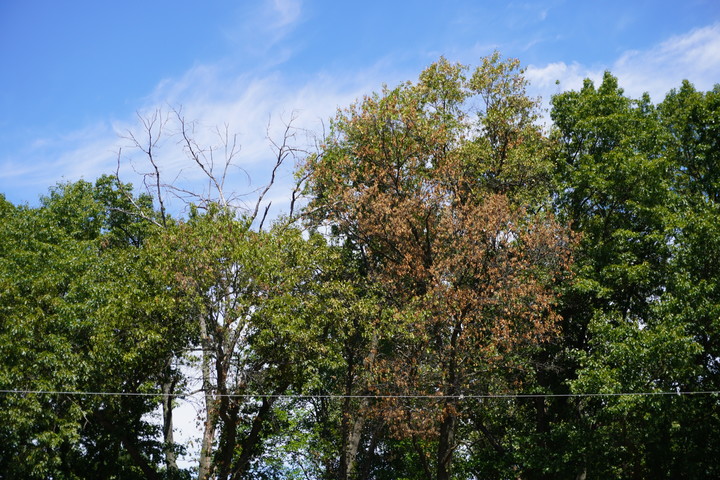 Oak wilt is a very serious and often deadly disease of oaks, specifically the oaks in the red or black oak group. The actual pathogen (Bretziella fagacearum) that causes the disease has been known to be in Ohio for many decades. Some years, it appears to be worse than others. Oak wilt is not like the emerald ash borer that spreads rapidly, almost like a tidal wave moving in one direction. Oak wilt builds in a way that it can radiate out to other like trees, but advances at a slower pace, but even then, can cause tree death in a single season, and often in a matter of weeks. When not managed it can continue to spread or move-out across an oak dominated landscape, park or woodlot as pictured below.

The fungus invades the sapwood or the water conducting tissues of the tree. In addition to its actual presence in the tree, it also triggers a defense reaction by the tree to stop the fungal spread. This action interferes with water uptake from the tree roots upwards to branches and ultimately leaves in the canopy. The result is wilting. Leaves turn brown from the tips, inward to the base of the leaf that attached to the branch. It has been described that this transition on the leaf looks like if you dipped it partially in milk chocolate.

While all oaks are susceptible to this fungus, those in the red or black group; black, pin, northern and southern red, scarlet, shingle and shumard oak are extremely susceptible and can die within a few weeks of infection. Oaks in the white group that include bur, chinquapin, post, swamp white, and white oak are more tolerant of the disease and can even survive infection for one or more years while displaying declining symptoms.

When the initial infection occurs, branches or large limbs will wilt. This is called flagging. The leaves on those branches will fall prematurely and it looks like fall in the middle of summer. The fungus will then continue to move throughout the tree.

If you have seen oak wilt a lot, you become familiar with the look or appearance. However, with that said, the only way to know for sure, is to test the infected plant material for confirmation. A conclusive diagnosis can only be made in specialized laboratories, like the Ohio State University C. Wayne Ellett Plant and Pest Diagnostic Clinic. There is a $20 fee for the test that will look for the presence of the pathogen’s DNA.

There can be other issues, or a combination of issues, that can cause similar symptoms, so proper disease diagnosis is critical. Other factors include drought conditions like we are currently experiencing, construction damage including root injury, insect pests, other diseases including anthracnose, bacterial scorch and root rot.

While insect-spread is an important medium to long-range dispersal, it is estimated that 90 percent of new infections occur between neighboring trees through root grafts. It looks like the disease radiates out from the initial infection. In order to manage oak wilt it is important to understand its cycle. The fungus spreads in two ways - overland and underground. A picnic beetle can pick up the spores on its body when visiting an infected tree, and then visit a healthy tree and ‘vector’ the pathogen. There is some evidence that oak bark beetles may also be moving the fungus from tree to tree. Once the disease is present, it can spread underground through root graphs – roots from different trees in the same genus that have grafted together.

What can you do to protect oak trees?

You can deter the overland spread by the insect by ensuring that trees are never wounded between April 1 – October 15, especially in areas of the state where oak wilt is a concern.

If trees must be pruned for safety reasons during the growing season, it is recommended that the cut surface be covered with latex paint. This can slow wound healing, but more importantly will deter beetles from landing on the wounds.

If you are in an area where there are dead and dying oak trees as a result of oak wilt, there are additional efforts you may consider including: preventative fungicide treatments, and/or trenching if trees infected trees are in the immediate area and could share root grafts.

For additional information, check out the OSU FactSheet on Oak Wilt at:  https://ohioline.osu.edu/factsheet/plpath-tree-02 authored by Pierluigi (Enrico) Bonello with OSU's Department of Plant Pathology.

Additionally, if you have a dead or declining oak that you suspect has oak wilt and would like it tested, contact OSU's PPDC directly making sure that you communicate that you suspect oak wilt and want to test for the presence of the pathogen. Here is a link to the PPDC website for additional information including the form that will need to accompany a suspect sample being sent the OSU lab in Reynoldsburg, Ohio: https://ppdc.osu.edu/