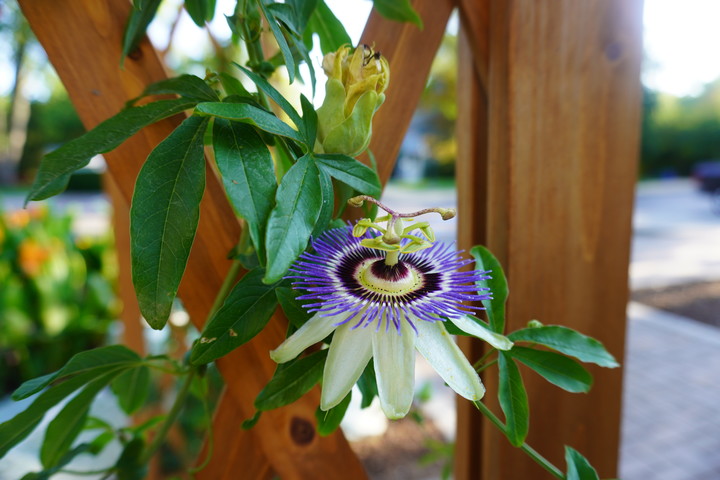 Passion flower (Passiflora incarnata) is an annual vine that climbs by axillary tendrils. It warmer climates it can become somewhat woody and be perennial-like in its habit, typically dying back to the ground each winter. In Ohio, it will die-back to the ground in the fall, but will need to be replaced with a new plant in the spring. It is native to the Southeastern U.S. and is easily grown in average, medium, well-drained soils in full sun to part shade.

In its natural habitat it is found along stream banks, roadsides, woodland edges, meadows and pastures. In Florida it is host plant for the Gulf Fritillary butterfly and thus a must-have for butterfly gardens in the Sunshine State. In Ohio, it is placed in more prized locations and often given support to grow up on things such as a trellis, pergola, arbor or fence. Although it is tolerant of drought, a loose mulch layer at the plant's base helps to keep the roots cool.

The beautiful, three to four inch flowers come in shades of lavender or purple, with a wavy fringe over five petals. The middle of the bloom looks helipad-like, with a tiny yellow bean-like pollen sac suspended overhead. Each flower lasts about a day during the summer and early fall, but quickly replaced by another. The leaves are deeply loped.

Maypop is another common name for this vine, relating to the loud popping sound made when the fruits are stepped on.  It is also called passion vine and apricot vine. This plant is moderately resistant to damage from deer.

There are two vines planted near the entrance to the new Inclusion Garden at the Toledo Botanical Garden. Earlier today, and young visitor stopped in the office with his mom. I was explaining to them about Extension and my job and talked about people bringing in plants and pests to the office for identification. At that point in the conversation this boy said, "I have a plant that I want to know what it is" and I asked him to tell me more about the plant. He described it, pointed, and said "it is right there." He described perfectly the flower and directed me to the actual plant. I was explaining to him about the plant and he excitedly said, "I know what I want for Christimas. I am going to ask for a passion plant." His excitement was awesome and he is the reason I am posting this BYGL Alert today. I hope this post about this plant brings everyone a little excitement in their life tonight!