I identified the culprit behind the elm sack galls pictured in the BYGL Alert I posted yesterday as the aphid, Tetraneura ulmi.  However, thanks to input from Dan Potter (University of Kentucky, Entomology), I learned that the true identity is actually another closely related elm gall-making aphid, T. nigriabdominalis.  You can see yesterday's post by clicking this hotlink:  https://bygl.osu.edu/index.php/node/1586

According to a research paper published in 2017 (see Reference below), the two aphids produce distinct galls.  The elm galls produced by T. nigriabdominalis "are hairy, elongate or pouch shaped, usually with a pointed apex, whereas the galls formed by T. ulmi are smooth and shiny and bean shaped."  Unfortunately, the authors also note that both types of galls can occur on the same leaf. 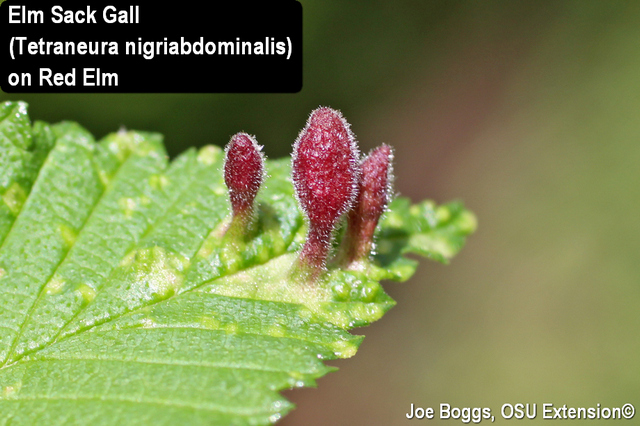 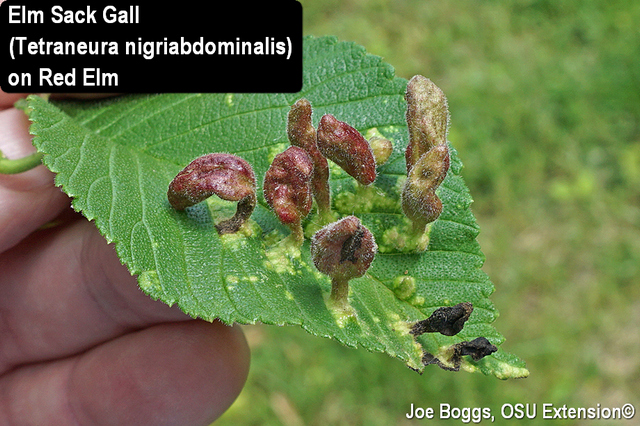 Its alternate common name is the "Oriental grass root aphid" because this aphid also flies to grasses where it feeds on the roots.  There's been a considerable amount of research on the Poaceae host range for this aphid because it will inhabit the roots of some economically important grasses including sorghum and maize.  In fact, there's a concern in Europe that this aphid could become a serious pest given the expansion of corn production in that part of the world.

As noted in the previous Alert, T. ulmi, is native to Europe but has found its way to North America.  While its primary host is elm, its secondary hosts are grasses (Poaceae) where the aphids feed on roots.  This is why the alternate common name is "elm-grass root aphid."  However, I could not find research that illuminates exactly which grasses:  turfgrasses, pasture grasses, grain grasses?

On a final note, I have not sorted out the elm host range for this aphid.  I most commonly see the galls on red (slippery) elm (Ulmus rubra) and only occasionally on American elm (U. americana).  Dan Potter noted that based on his observations, they are particularly fond of hybrid elms.  I'm planning to spend some quality time with elms this weekend and next week to try to take pictures of the host range for this non-native elm gall aphid.  I'd also welcome your own observations. 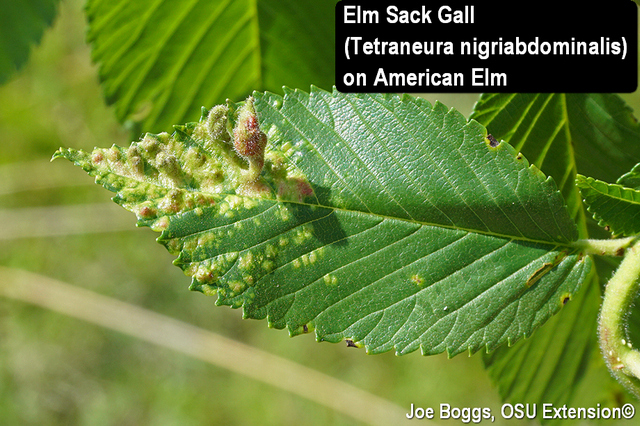