Nostoc commune: From "The Blob" to Crusty Black Stuff Recent heavy rainfall across Ohio has been very beneficial to the cyanobacterium, Nostoc commune (NC).  Of course, that's not the name that most Ohioans will use to refer to this ancient organism.

E-mails and phone calls to horticulture professionals may describe it as rubbery yellowish-green or bluish-black growth rising from the soil; some may just describe it as "the blob."  NC may also be described as "black crusty stuff" once rainfall subsides and sunlight prevails, but more on that later. 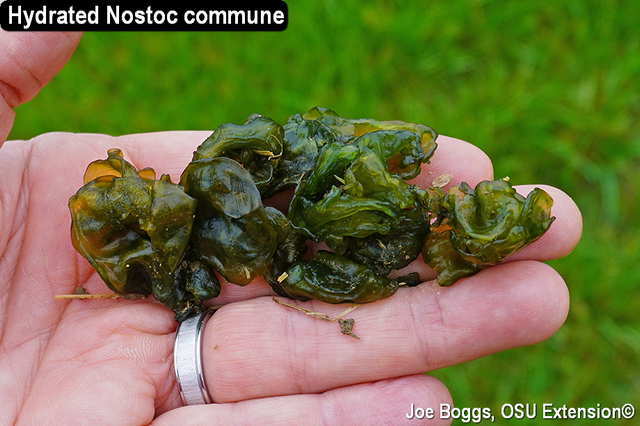 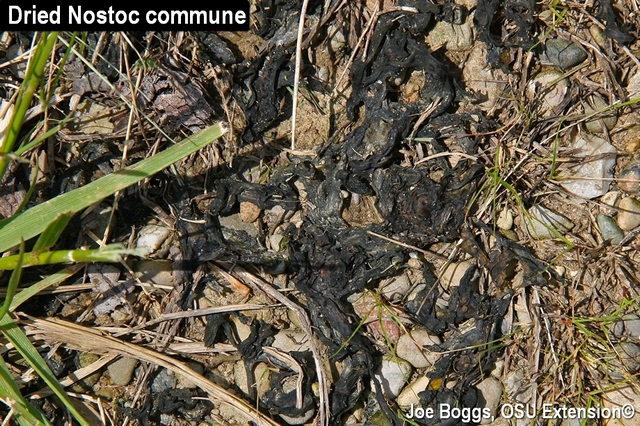 Identification requests commonly include descriptions of impacts far beyond the capabilities of NC such as killing lawns.  This cyanobacterium does not kill turfgrass or anything else in Ohio landscapes.  Openings in turfgrass are being caused by something else and NC is just an innocent bystander taking advantage of an opening to the sky. 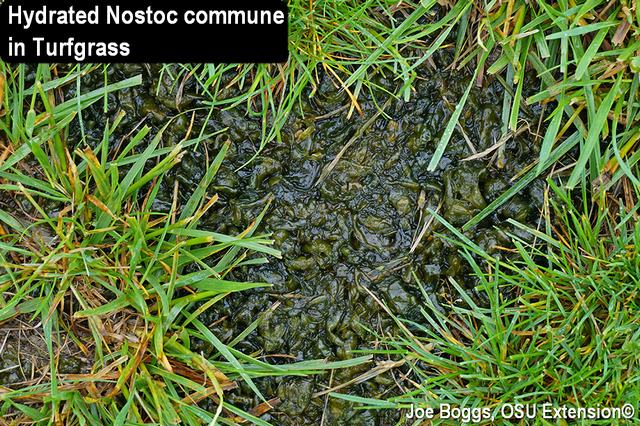 I photographed hydrated NC in southwest Ohio this past week; however, the colonies are rapidly drying out with increased sunlight and decreased rainfall.  Jim Chatfield posted a BYGL Alert this past Tuesday that included a picture of hydrated NC in the northeast part of the state (see:  Fernleaf Beech to Nostoc, Weekend Wonders, Part Deux).  You can read his Alert by clicking on this hotlink:

It's Not an Alga!

Cyanobacteria have long been mislabeled as "blue-green algae."  That's because they have slightly bluish-green photosynthetic pigments in their cytoplasm.  Since the bacteria act like plants by producing their own "food" (polysaccharides) and generating oxygen, cyanobacteria were once lumped in with the algae.

However, algae, as well as other plants (and animals), are Eukaryotes meaning their nuclei are wrapped in a membrane.  Cyanobacteria lack membrane-bound nuclei; a condition that makes them a Prokaryote.

Cyanobacteria have a number of interesting tricks up their prokaryotic sleeves.  They are single-celled organisms that can exist in multicellular states with chains of cells stuck together within a sheath to form a filament.  This allows the cells to communicate and share nutrients over a large area which is how many Nostoc species form large mats. 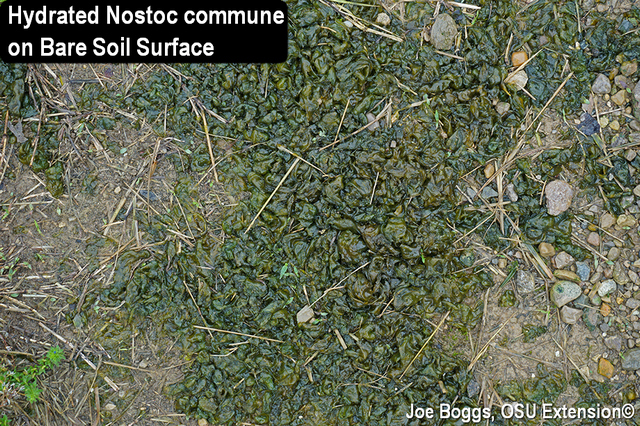 Cyanobacteria have specialized cells called heterocysts that can grab nitrogen out of the atmosphere in a process called "nitrogen fixation" to convert the nitrogen into molecular forms that make the element available for the bacteria as well as plants.

For this reason, some cyanobacteria may be found growing on the surfaces of plants, including certain algae, which once added to the confusion with learning the true identity of these unusual bacteria.  Some, such as NC, also have specialized pigments in their cells that absorb UV light to protect against UV radiation.  This allows this bacterium to survive intense solar radiation.

NC and others in this genus of unusual organisms are often misidentified because of their changing appearance.  During periods of wet weather, NC may look like an agglomeration of rubbery yellowish-green to bluish-black material is "bubbling-up" from the soil. 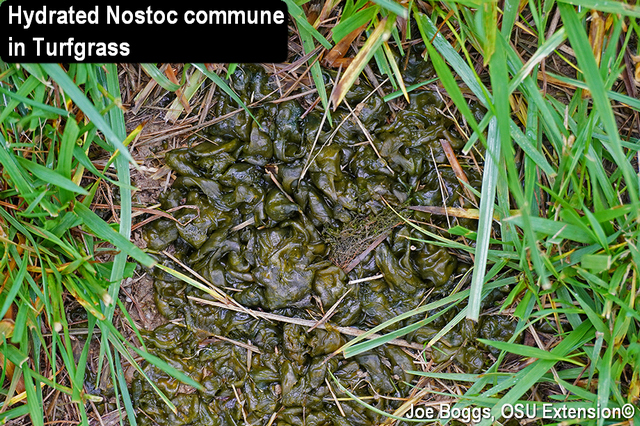 The otherworldly appearance of hydrated NC is responsible for several common names.  It was once believed the alien-looking masses originated from the dust of shooting stars (a.k.a. meteors) which accounts for the common names of star-jelly, star-shot, and star-slime.  Other common names such as "witch's-butter" are self-explanatory. 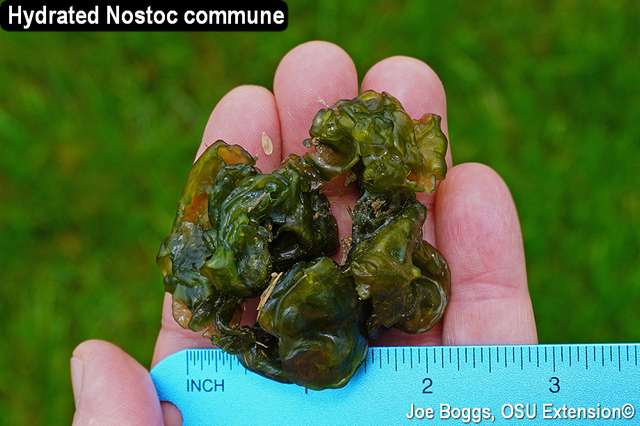 During periods of dry weather, the odd-looking masses collapse and turn black; the "black stuff" that will appear later this season.  In fact, this is the most common appearance of Nostoc spp. that does not enjoy irrigation.  Dehydrated NC is the form of this cyanobacterium that is most commonly encountered in landscapes, nurseries, and even in drainage ditches. 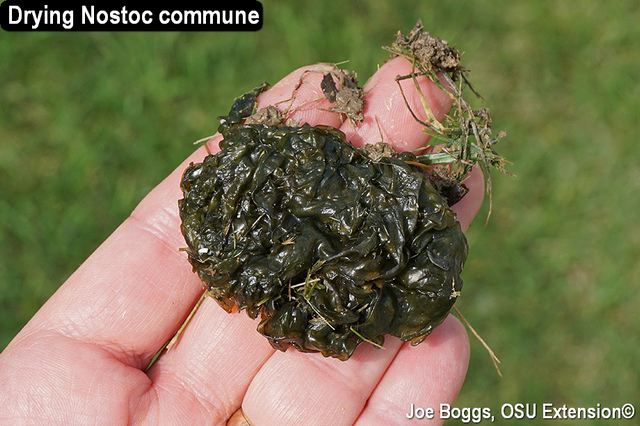 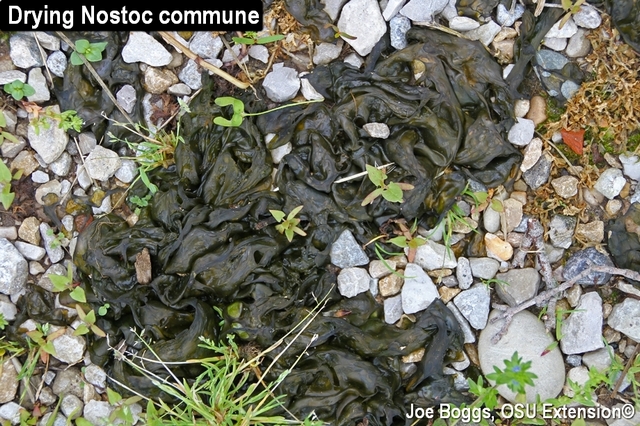 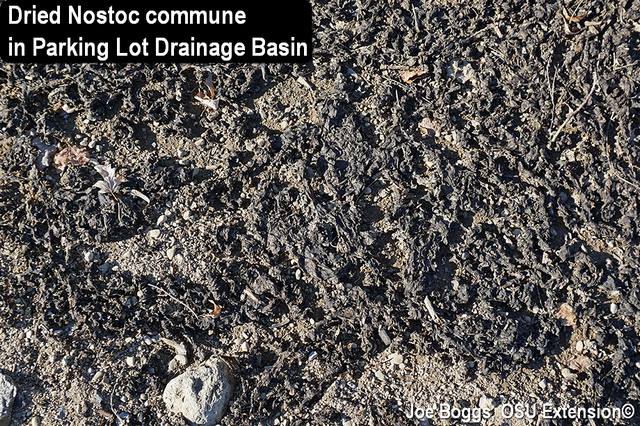 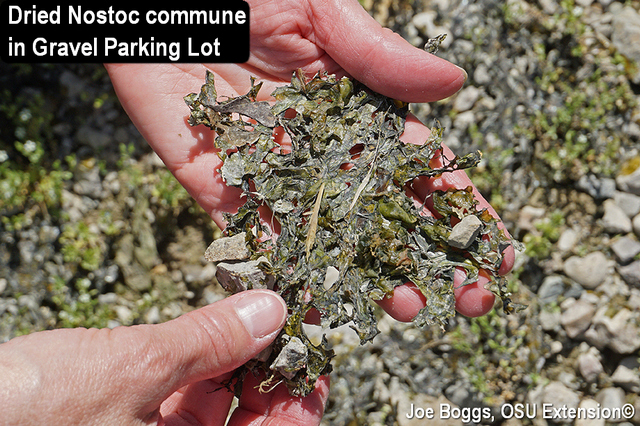 The bottom line is that NC and other mat-forming members of this genus are not toxic; they cause no harm to plants or animals including harm to the health of concerned Ohio landowners.  However, the mucoid hydrated mates can become slippery when wet, so tread carefully.

There are a number of evolutionary connections between cyanobacteria and the rise of plants.  Biologists generally agree that chloroplasts in plants have their ancestral origins with cyanobacteria through an evolutionary process called "symbiogenesis."  Without cyanobacteria, higher plants as we know them would not exist.  In fact, neither would we.

Earth has been around for about 4.55 billion years.  Some believe our planet has been around slightly longer, but what's a few billion more or less among friends.  There was no oxygen in Earth's early atmosphere; it was "anaerobic."  That didn't mean life didn't exist, but it was life-forms that evolved and lived without oxygen.  Some of those anaerobic microbes still exist, but not where they're exposed to the oxidizing effects of oxygen.

Although NC is a remarkable organism that causes no harm and has even been investigated for use in land reclamation sites, it and other cyanobacteria in this genus can grow in large mats that present a slippery safety concern in nurseries and greenhouse walk-ways.  Blackened, dehydrated colonies can create an unsightly mess on the bottoms of plant containers.  The same is true with colonies growing in gravel driveways. Still, it's almost impossible to eliminate an organism that has survived numerous mass extinctions from rampaging volcanoes to a dinosaur-killing meteor strike.  Here are some points to consider.

Water:  Nostoc spp. are terrestrial organisms that can survive long periods looking like blackened, dried-out mucus.  However, they must have periodical infusions of water to thrive.  So, moisture management through improved drainage is essential.  This includes addressing both shallow as well as deep drainage issues. 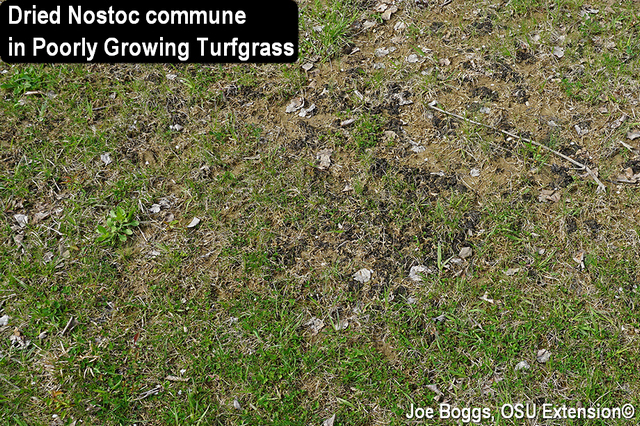 Fertilizer:  Although Nostoc can generate its own food and grab nitrogen from the atmosphere, it must acquire other nutrients from its environment.  In fact, phosphorous is considered the most limiting nutrient in Nostoc development.  This has also been observed with the aquatic cyanobacteria that periodically foul lake waters; but don’t call the problem "algal blooms!"  So, limiting phosphorous runoff can reduce the development of Nostoc mats.

Chemicals:  Algaecides such as sodium carbonate peroxyhydrate and copper sulfate products provide limited to no control of Nostoc; it's not an alga.  Herbicides such as glyphosate (e.g. Roundup) not only provide no control (it's not a plant), but the release of phosphorus from dead plants can actually support Nostoc growth.

If You Can't Beat'em; Eat'em … with Caution

Back in early April, I exchanged several e-mail messages with John Ulrich who lives in Flower Mound, TX; possibly the best name for a U.S. town that I've ever heard.  John described his NC culinary experiences thanks to his girlfriend and her sister who are from China.  They harvested and prepared several dishes based on NC. 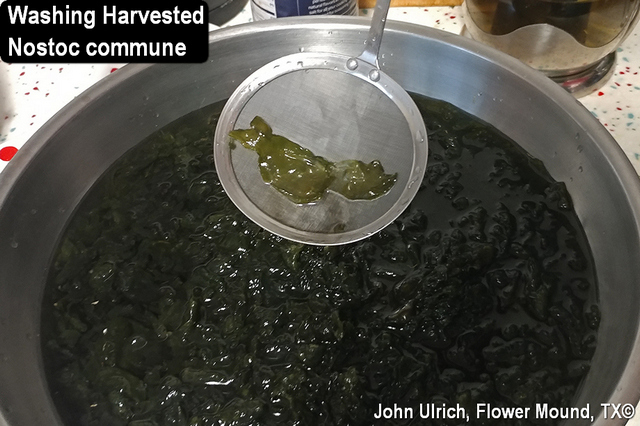 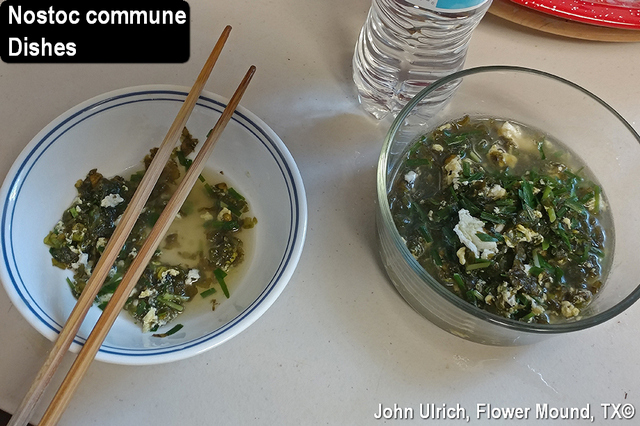 John's messages provided first-hand insights into something that's often included with descriptions of this fascinating organism:  NC is commonly eaten in many Asian countries including the Philippines, Indonesia, Japan, and China.  I thank John for providing his first-hand accounts and pictures.

PLEASE NOTE:  Although NC is one of the most common Nostoc species found in the U.S., there are others.  As with mushrooms, it's strongly recommended that epicurean adventurists seek the help of an experienced harvester before eating NC.  Of course, it's also important to rely on expert advice for NC preparation!