Authors
Jim Chatfield
Published on
May 14, 2020 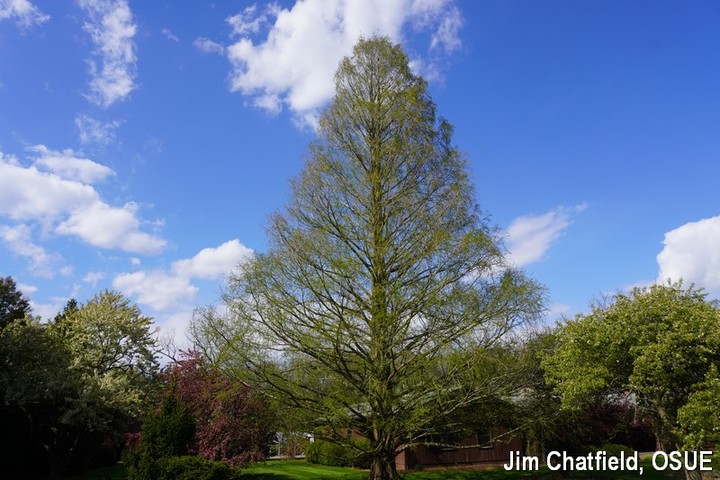 On Sunday, May 10, an alert (https://bygl.osu.edu/index.php/node/1560) illustrated what the 26F temperature on early morning May 9 wrought on crabapples at Secrest Arboretum, closing with a picture of new oak leaves emerging. It has now warmed into the 50s Tuesday and yesterday and now even warmer in the Wooster area, so, before all Spring breaks loose with 70s and even low 80s for the rest of May, here is what was showing Tuesday, from aftereffects of frost (le gel in Française) to rising horticultural wonders.

First, Back to Oaks. Oaks are some of the last deciduous trees to leaf out in Spring, but we nevertheless often fail to notice the startling beauty of this new foliage emergence. Our native northern red oak (Quercus rubra) is labeled at Secrest “the most dominant oak in Ohio”. It is considered an invasive species in many areas of Europe, though valued there as well for rapid growth and use as a timber species. Shumard oak (Quercus shumardii) is another of the red oak group species and as such takes two years for acorns to mature. My urban forester buddy Barry Weber always pointed out the wonderful root flare of mature Shumard oaks in City of Columbus parks.

Jolly Old Roly-Poly Oak Galls.  I saw these tiny grape-like oak galls on an oak on the southern edge of Secrest Tuesday, so naturally called (Gallee) Joe Boggs about my find. We both wonder if this particular roly-poly gall (caused by a cynipid wasp insect presumably in the genus Andricus) is perpetually this tiny or will grow larger later. “Roly-poly” comes from the fact that immatures of this wasp develop in a tiny seed-like structure, rocking and rolling about in the breeze.

Frost Damage. The extent of damage will be unclear for some time, but one of the most dramatic plants affected was a number of ash (Fraxinus) taxa in the ash germplasm plot at Secrest. Other plants clearly affected included foliage of Aesculus and weeping European larch. Flowers with considerable bites of frost included some of the later magnolias (compared to earlier star and saucer magnolias), and pawpaw flowers.

Dawnredwood (Metasequoia glyptostroboides).  Recently I showed pictures of the Dawnredwood Grove at Secrest, but this time what stood out was the magnificent specimen near the Secrest nursery and OSU-Wooster grounds maintenance headquarters.

Flowering Dogwood (Cornus florida). This is ever lovely as the inflorescence emerges, with the four creamy-white bracts with notches at the apex of the bracts, and the tiny perfect (both male and female flowers) in the center. There are many cultivars and hybrids (with Kousa dogwood, Cornus kousa), but the seedlings along the understory edges of woodland areas of Secrest are just as graceful.

…And last but not least…

Crabapples Still Reign. Later-bloomers show little or no damage from the frost, so many crabapples are not yet past, from the upright ‘Adirondack’ to the rounded habit of ‘Coralburst’, as well as ‘Sparkler’ along the road and near the Secrest nursery.

Now, on with Spring!

"When purple finches sing and soar . . .
With vernal gladness running o'er—
When joys like these salute the sense . . .
Then waiting long hath recompense,
And all the world is glad with May."
―John Burroughs