We Speak For The Knees? 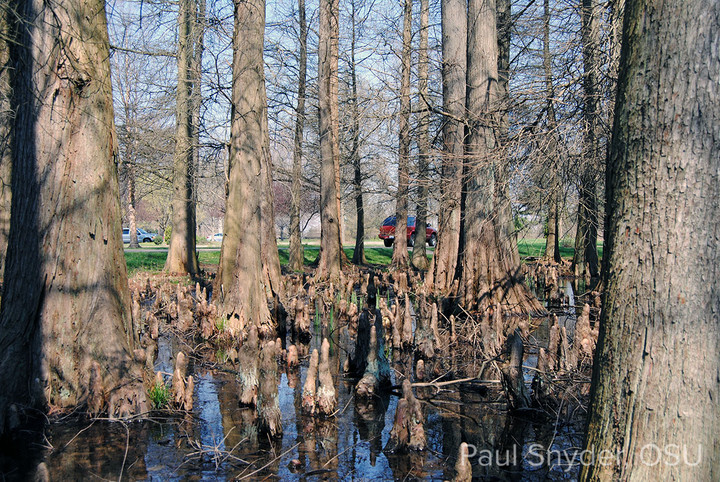 Correction 5.20.20
An article published in the International Journal of Plant Sciences was brought to my attention by Bob Polomski, Ph.D., Extension Associate, Clemson University, indicating that Baldcypress knees do indeed function as pneumatophores.

See citation below for article text:

A couple weeks ago I was encouraged by Wooster Campus grounds manager, Roger Hamilton, to visit the knees growing on our Taxodium distichum at Secrest Arboretum. It had been several months since I had visited that particular spot. The last time I had done so one of the few snows we received this winter blanketed the ground and made the knees difficult to see.

Taxodium distichum, Baldcypress, forms distinct knees in wet soils or standing water. Knees are woody protrusions growing from roots that loop or fold at the soil surface. The knees intrigue everyone who sees them and are an emblematic image of the south. To the practical observer cypress knees are interesting, but what function do they serve? I’ve always heard and repeated that the knees aid in gas exchange for the roots. This makes logical sense, until one observes knees on Taxodium distichum growing in dry soils or completely lacking on trees found in deep water.

In search of an answer I found there are seven different hypotheses on the role of cypress knees.

Knees are commonly found on trees growing in wet soils and shallow water. Some researchers suggest that the roots are pneumatophores, roots specialized for gas exchange in wet soils. However, upon closer examination cypress knees lack the structures that characterize pneumatophores. In addition, researchers have sealed off knees to measure oxygen absorption over the course of several week. The results: oxygen absorption by the knees was lower than that of other plants. Out with the aeration hypothesis.

Perhaps knees aid in vegetative regeneration of Taxodium distichum. This sounds like a good idea but knees lack adventitious buds and no sprouts have been observed on knees. Out with that hypothesis.

Perhaps knees release methane gas that is absorbed by the roots. A trial by William M. Pulliam found that knees release miniscule amounts of methane. However. such methane levels may be produced by bacteria living on the outside of the knees rather than the knees themselves.

Other hypotheses include mechanical support, nutrient acquisition, and carbohydrate storage. Yet all of these hypotheses have proven false.

What is the function of cypress knees? We don’t know. Sorry to disappoint anyone who has read this far hoping I had the answer.

The scientific information is limited and inconclusive, but that is the beauty of science: we continue to seek understanding. We continue to revise and retest hypotheses. And at the end of the day we must be comfortable saying, “I don’t know.”

The natural world is beautiful in that way; we can search out and understand nature’s mysteries. We can learn and have learned a great deal, yet nature remains a mystery. “The cypresses keep their secrets from the prying investigator” (J. E. Rogers,1905).

The Knees of Taxodium distichum