Authors
Beth Scheckelhoff
Published on
May 12, 2020 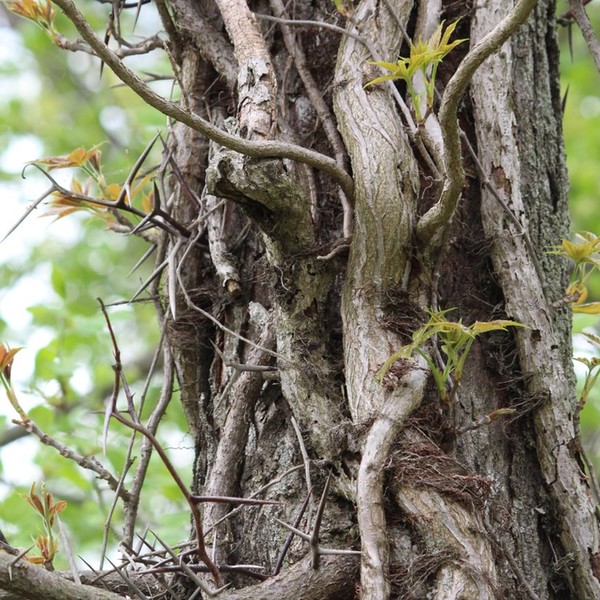 Vines are trailing plants that use stems, tendrils or adventitious roots to help them “climb” up surfaces like walls, bricks, stone, plants and trees to reach new heights.  The curious nature of two vining plants – Virginia creeper and poison ivy - came to light this past week. Both plants are native, herbaceous perennial vines with compound leaves commonly found throughout the woodlands of Ohio. Often, they grow near one another or even intertwined on the same tree. Can you tell these two plants apart? 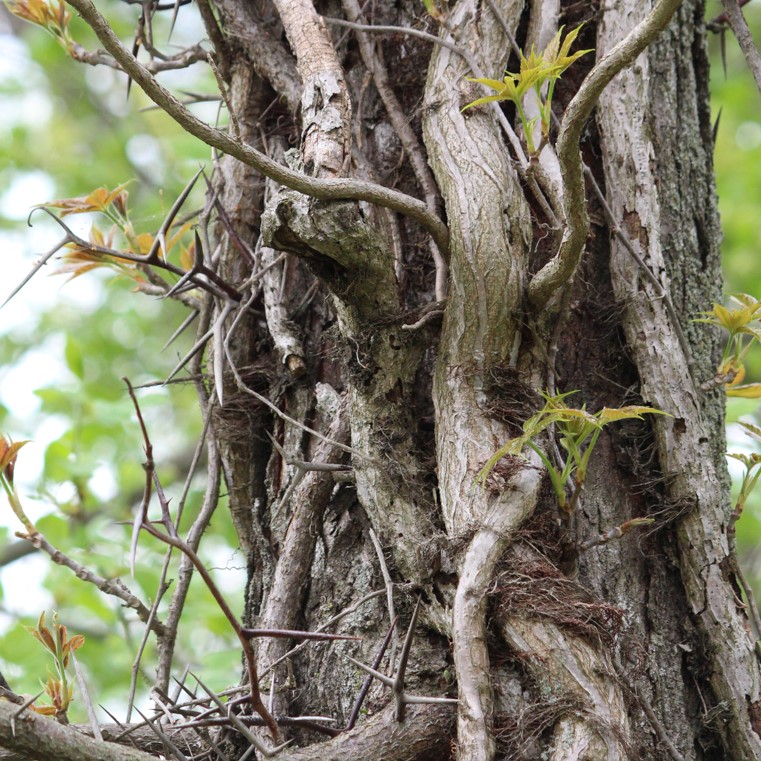 Virginia Creeper (Parthenocissus quinquefolia) is in the grape family and is both a climbing vine and a groundcover. Its scientific name translates to “five-leaved virgin ivy”. As one would expect, each compound leaf has five leaflets.  Occasionally, new growth may have three leaflets – thus the cause of some confusion with poison ivy, especially in the spring. 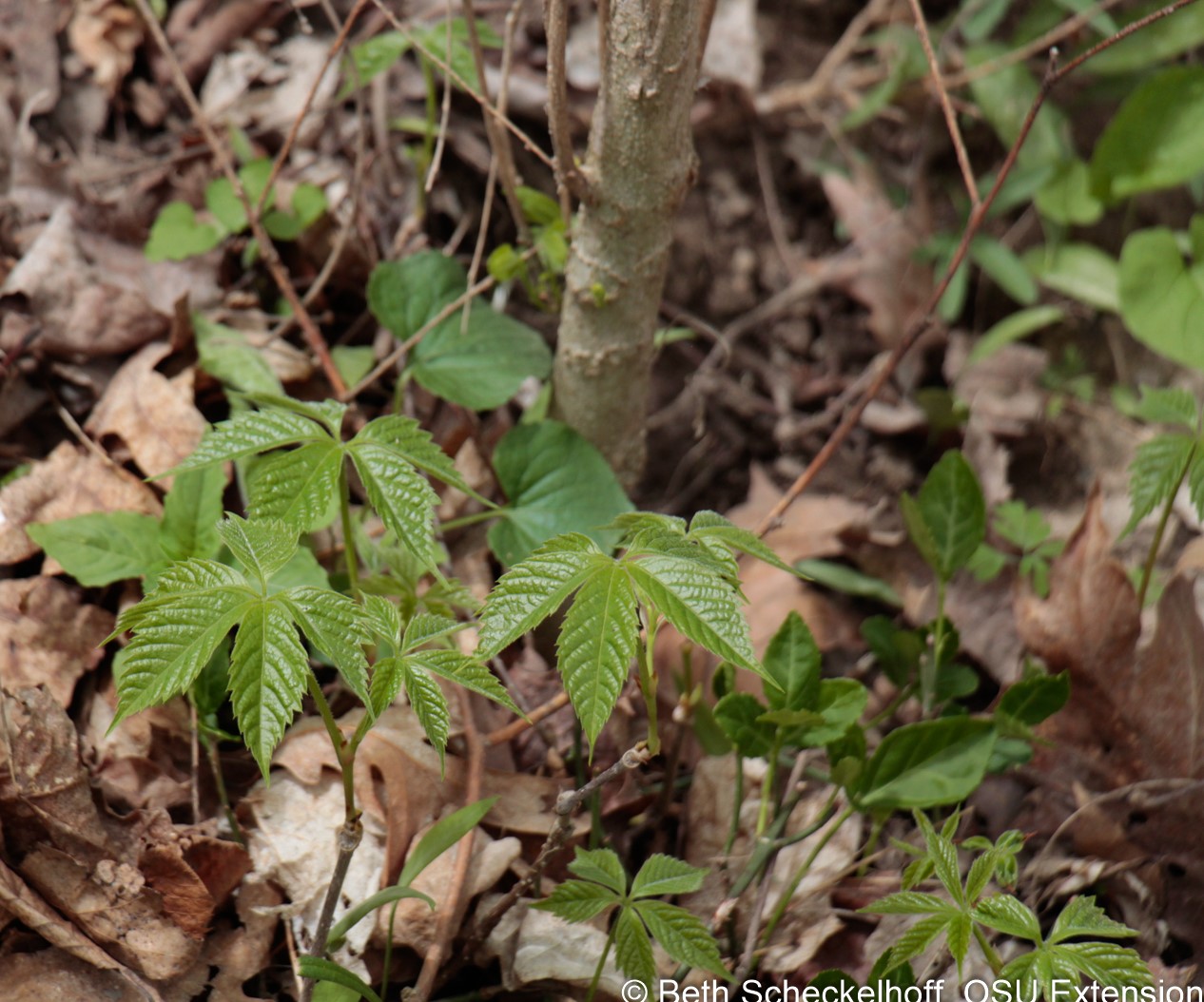 Virginia creeper has five glossy-green leaflets on each leaf.

Virginia creeper climbs by tendrils equipped with adhesive ends called sucker discs. These discs enable the tendril to adhere to the bark or other surface (think of the octopus suckers). 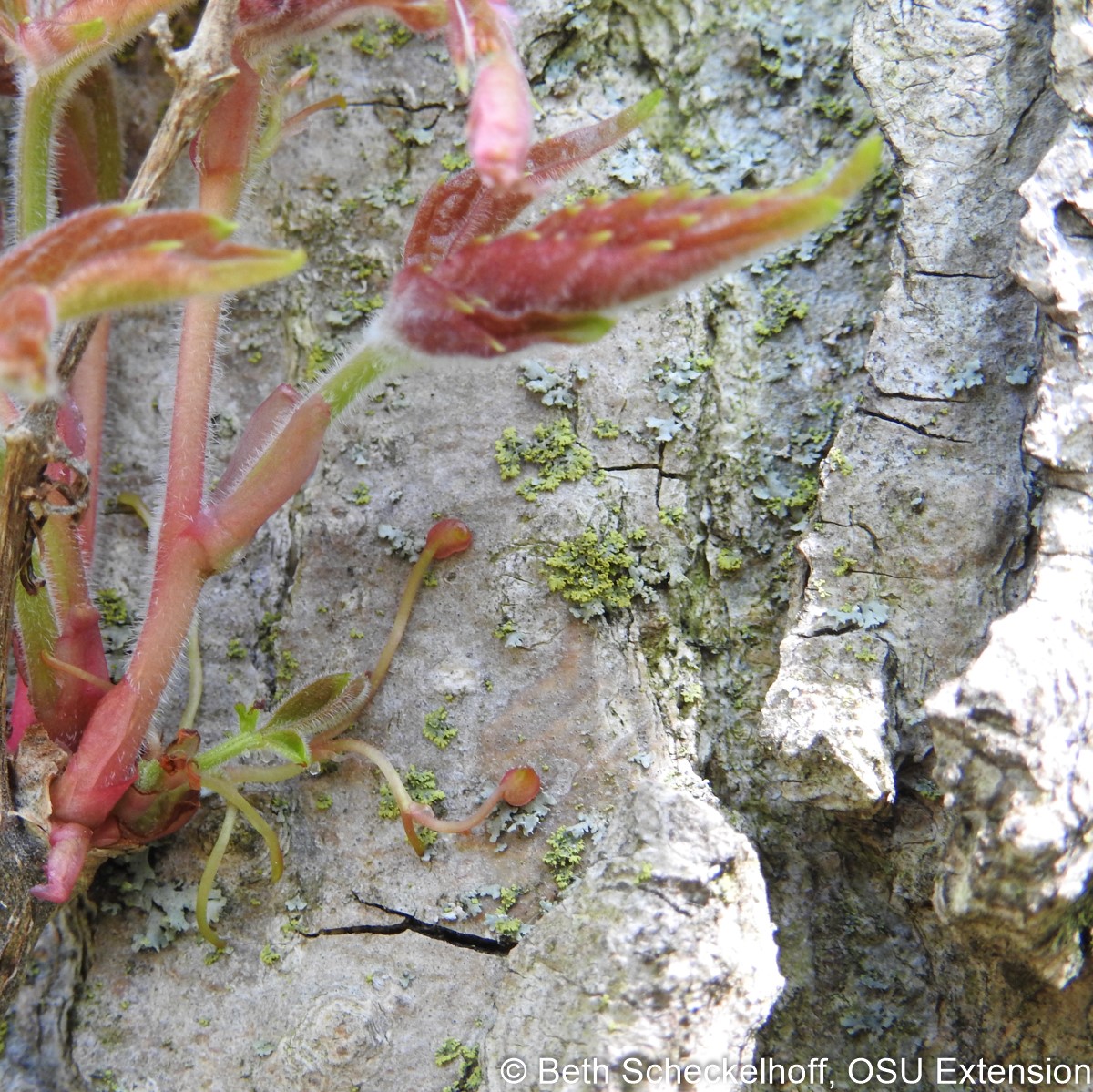 Virginia creeper produces small, blue berries that serve as a minor food source for wildlife. Despite its beautiful, early fall color, Virginia creeper is considered invasive in parts of the Eastern United States.

Poison Ivy (Toxicodendron radicans) is in the sumac family. Despite its name meaning “poison tree taking root”, poison ivy is regularly consumed and dispersed by animals including deer, birds – and even goats.

Poison ivy has leaves with three leaflets occurring across from one another along the stem. The middle leaflet is somewhat longer than the two below it.  The leaves are usually smooth and dull or glossy green.  Leaf edges can be smooth, toothed, or lobed and can vary in color on the same vine. 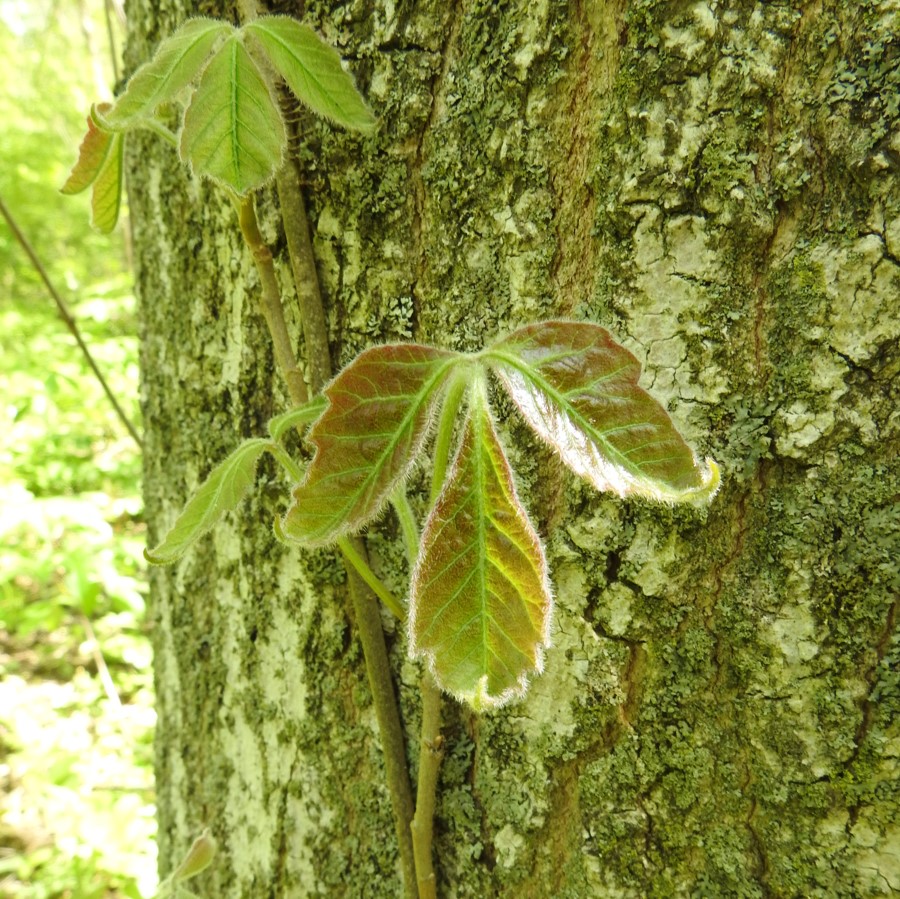 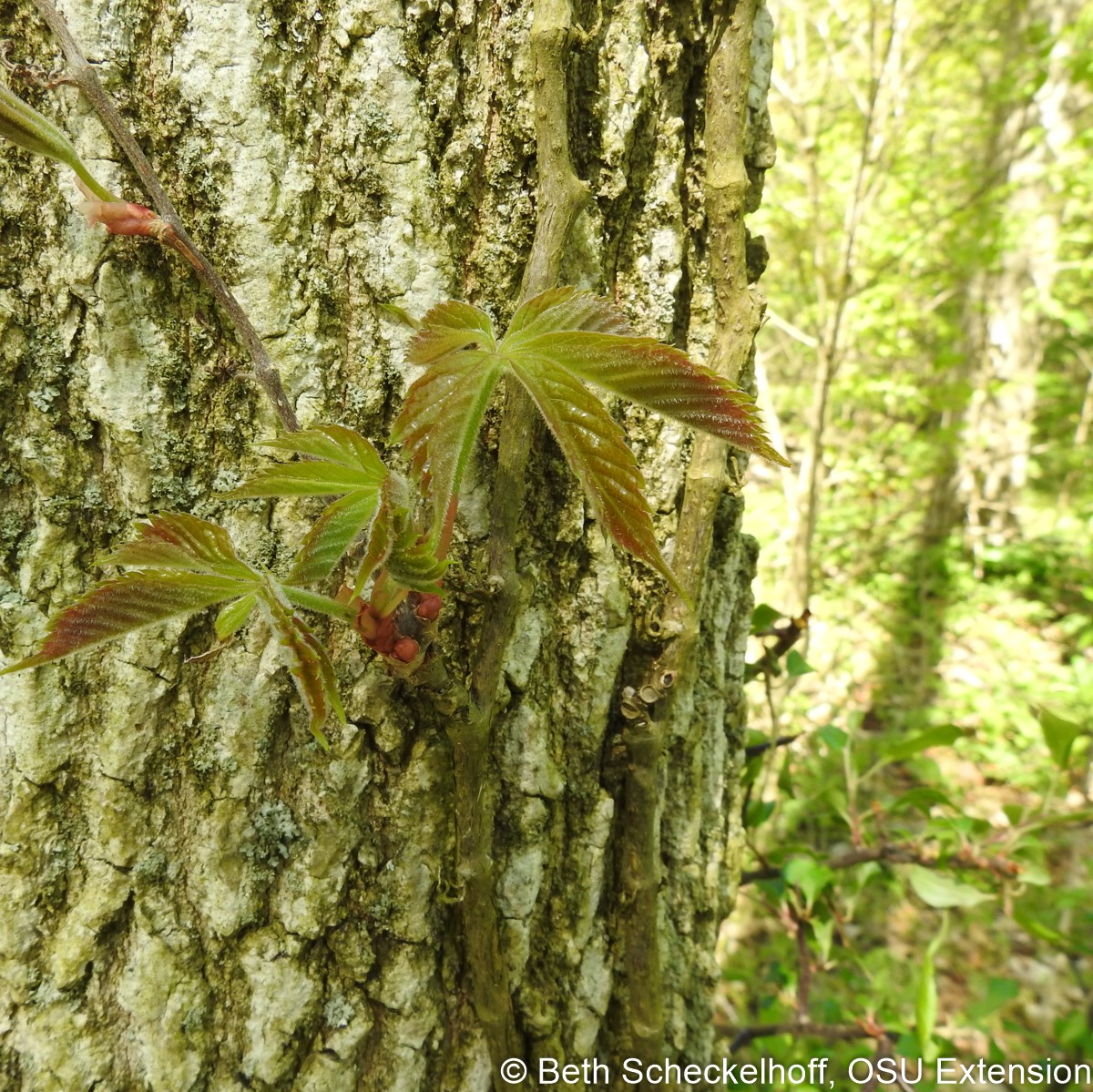 Virginia creeper resembles poison ivy in the previous image in size and color.  Note number of leaflets and presence of tendrils and suction discs (Virginia creeper) or adventitious roots (poison ivy) to be sure!

Poison ivy can be somewhat difficult to identify because it has several forms – growing in clumps of plants to 30” high, as a climbing “hairy” vine, and sometimes as a small shrub. Poison ivy uses adventitious roots to cling to the side of tree trunks, often imparting a “hairy” appearance. You may have heard the saying “hairy vine, no friend of mine” in reference to poison ivy. 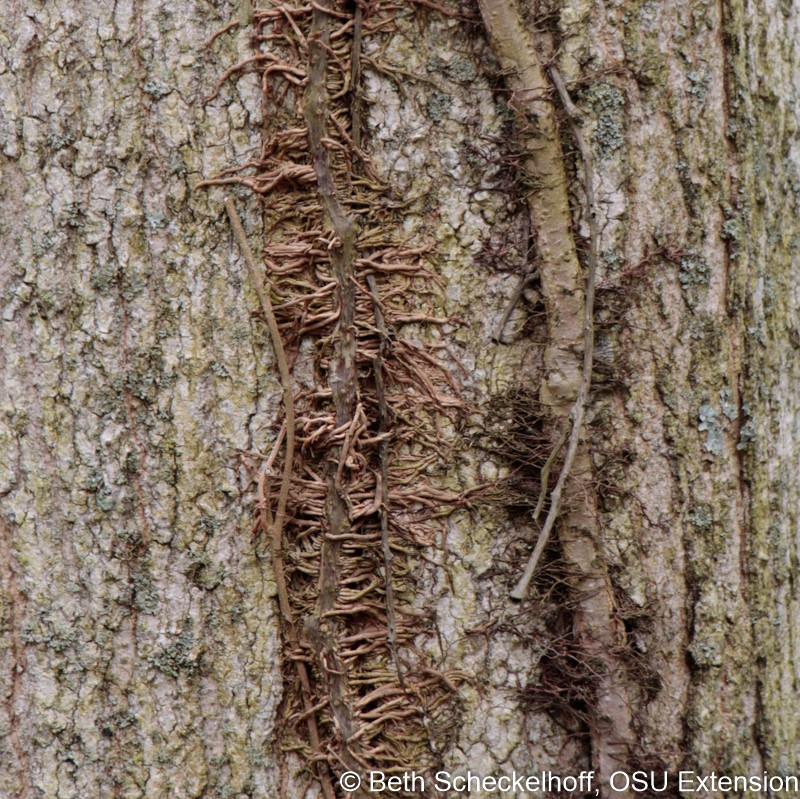 Interestingly, urushiol can remain active on surfaces for several month to years - making it necessary to properly wash clothing, shoes, gloves, garden tools, and even pets that have contacted poison ivy. One additional note: Do not burn poison ivy as the oil can be carried in the smoke and cause dermatitis as well as severe respiratory problems when inhaled.

Many sayings from the past used to warn people of the dangers of poison ivy. You may have heard one or more of these sayings: "Leaflets of three, let it be" or “Longer middle stem, stay away from them.” The best advice from ages ago that rings true today, “Leaves of three, let it be. Leaves of five, let it thrive.”

Can you correctly identify each vine in this image?  A rash determination could lead to an itchy rash! 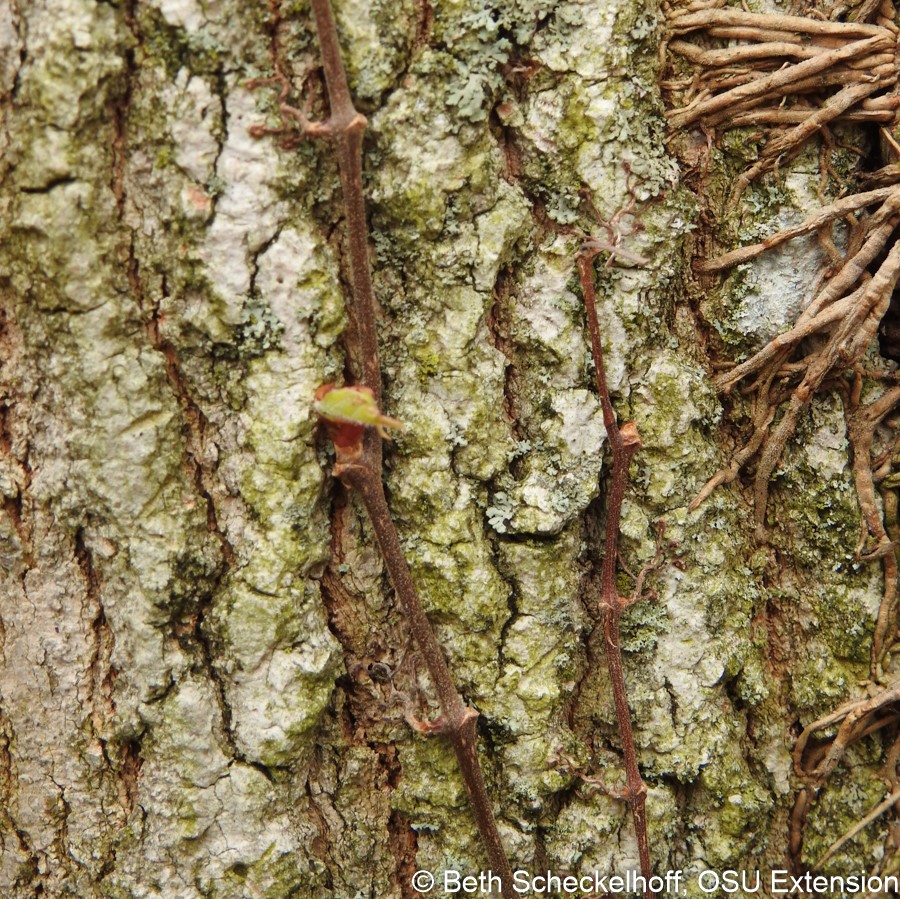